A British Christmas Celebration: The Food

As we get closer and closer to Christmas here in the UK, I am noticing all the ways that a British Christmas celebration is different from how we celebrate in the US. While much of the holiday is the same - the music, the lights and decorations, presents, and, of course, worship, there are a lot of traditions here that we just don't have at home. I once mentioned to Steve that I wanted to have as authentic of a British Christmas as possible. I knew it would be tough as by Christmas we will be in Cornwall, England, and since we are only there a week we won't have time to make any friends who will invite us to join them. So Steve offered to throw us a British Christmas early, and boy oh boy did he go all out! 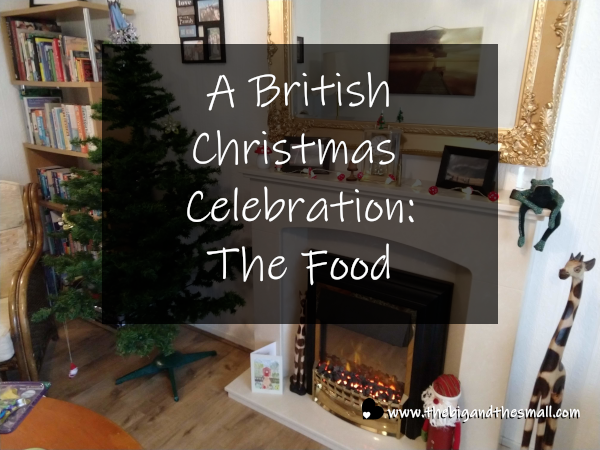 When we first started planning our early Christmas celebration, we figured it would be mostly about the food. A real Christmas dinner is a very important part of Christmas here (especially if all the grocery store commercials are to be believed.) Little did we know that Steve had an entire day of all the Christmas things planned for us. It was amazing.

We picked a random Monday to celebrate, so Steve picked us up in the early afternoon and we headed to his house. After getting the tour (it was our first time to his place) I worked on decorating the tree, while Steve worked in the kitchen, and Joel got engrossed in Steve's Xbox. (The poor guy has been video game deprived since we left the States!) After a while I decided to help Steve in the kitchen so I could see how a real Christmas dinner was made. We had a laugh when Steve pulled out some "dress up" items including a Santa hat, a black Santa hat that said "bah humbug", and well, this: 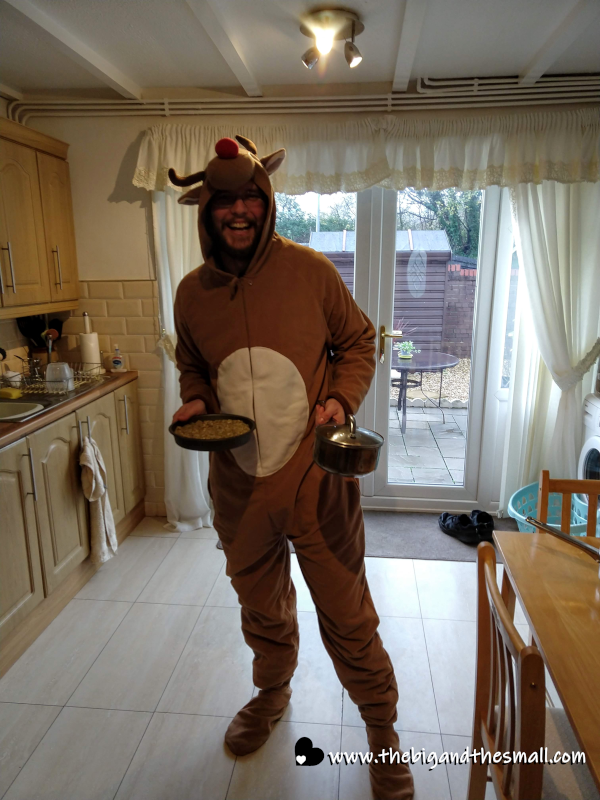 Yes, that is Steve in a full on reindeer costume working on preparing Christmas dinner. He pretty much posed for this one picture then went back to his regular form, but to be fair, it was getting really hot in the kitchen. And for good reason! The whole oven was full of goodies baking away. In this picture you can see the roasted potatoes, roasted parsnips and carrots, stuffing, pigs in a blanket, and yorkshire puddings. It all smelled even better than it looks. 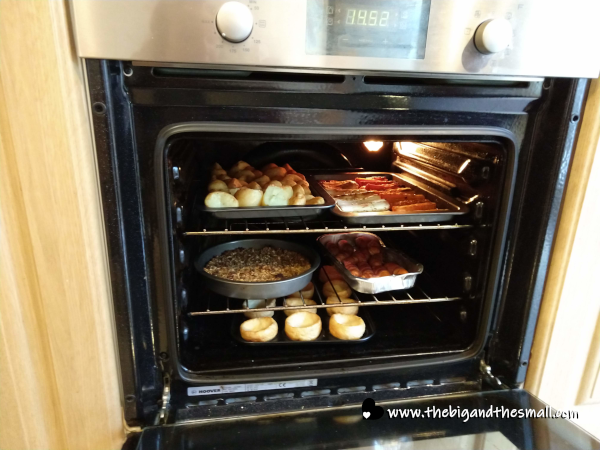 Before we arrived Steve had already cooked the turkey and had it resting on the counter. Just like when Emily prepared our turkey for Thanskgiving, it was smothered in bacon! However, instead of a full turkey like we had at Thanksgiving, this was just a turkey crown. Steve explained that stores sell it this way because a lot of British ovens are too small to fit a full turkey, especially when you consider everything else that goes into the meal. 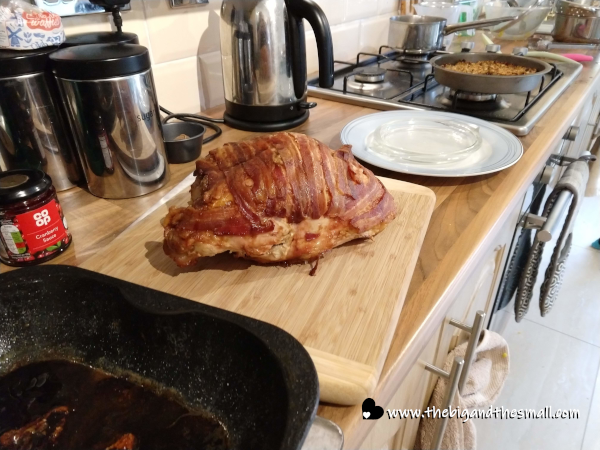 In addition to all the items named above, on the stove we had Brussels sprouts, swede, and gravy bubbling away, just waiting for dinner to be ready. About an hour after we got there everything was ready to go for this full Christmas dinner! Not only did Steve have all the proper food prepared for us, at each of our seats was a proper Christmas cracker. This is a British tradition that I really think should cross the pond to the US. You can see the silver packages on the table - what you do then is take the one at your seat in your left hand, then cross your arms, and with your right hand grab the cracker of the person next to you. When the whole table is linked, everyone pulls on the crackers until they pop! 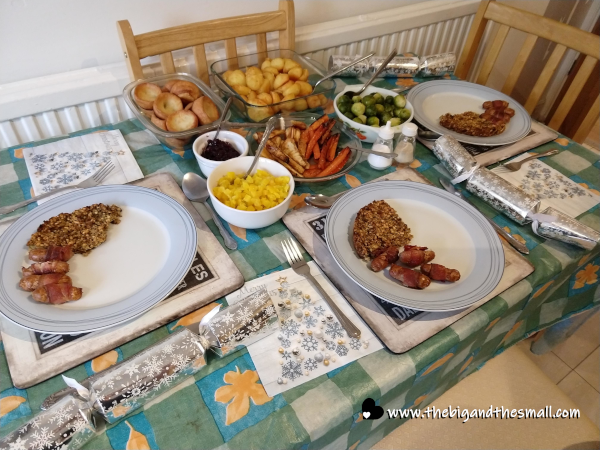 You get to keep whichever popper stays in your hand, which might mean you end up with two. Ours worked out perfectly that we each had one, so all of us dug in to see what our prizes were. Each one had a paper crown - this is a very important element of a proper British Christmas according to Steve. If you don't wear yours all day the Queen will get mad at you. (She has spies, just like Santa). 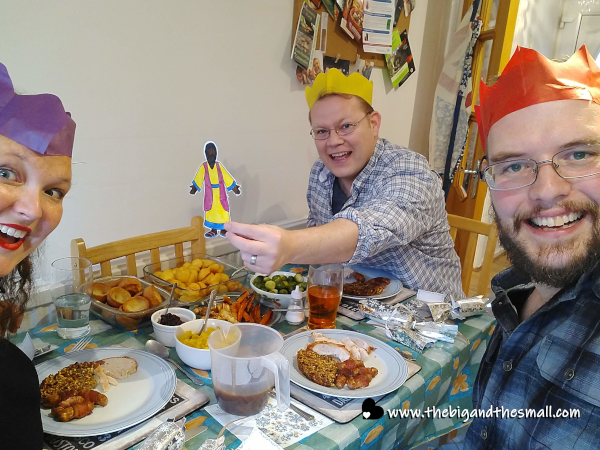 Each one also comes with a small toy and a joke. Steve got a teeny tiny ten pin bowling game, Joel got a fortune telling fish, and I got a miniscule model airplane. Joel and I decided to switch toys, and we all had fun playing with the fish before we dug into our food. Steve also made us each read our joke before we could eat. The guys groaned at them but I laughed - I love a good cheesy joke! I don't remember the other two but here was mine: "Q: Who is never hungry at Christmas? A: The turkey - he's always stuffed!" 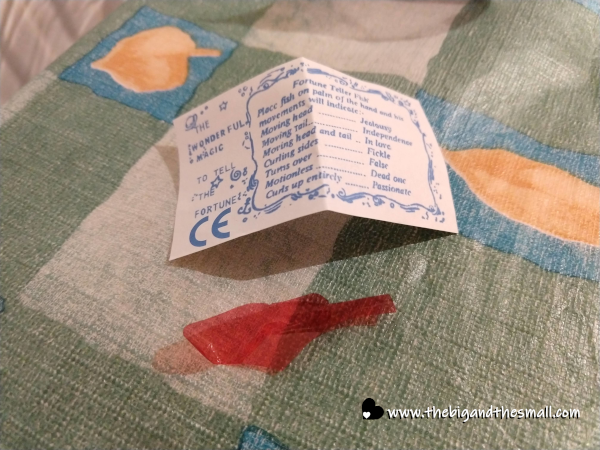 After all the fun with crackers it was finally time to dig into the food. We watched Steve make his plate first so we could copy his exactly! On the plate we ended up with: yorkshire pudding, turkey, cranberry sauce, roasted potatoes, swede, carrots, parsnips, Brussels sprouts (yes, I only took 1), pigs in a blanket, stuffing, and half the plate smothered in gravy. A few notes: 1. Yorkshire pudding is a baked bread type thing 2. Steve said Brussels sprouts are required, whether anyone likes them or not (though Joel loves them), 3. What they call pigs in a blanket here are different than ours - rather than sausages wrapped with crescent rolls, they are wrapped in bacon! 4. If you aren't sure what swede is, you might be more familiar with the name rutabaga. 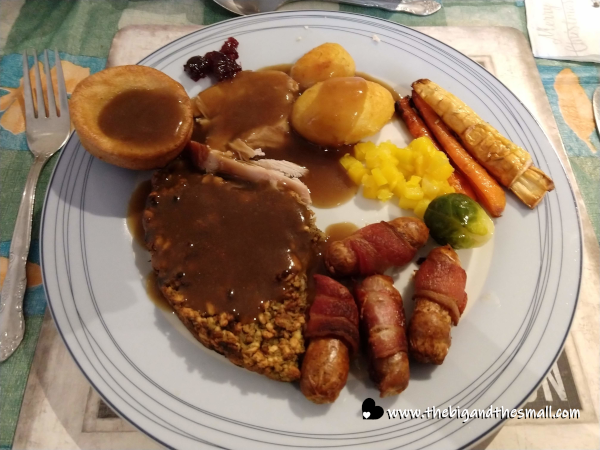 When we cleaned off our plates it was time for dessert! Rather than waiting we decided to power through, so Steve broke out the Christmas pudding. This is a cake that is mostly dried fruit and alcohol, that sits and ages for at least six months and up to a year. Steve said his family used to make them in January, then stick them under the stairs until December! This one was bought at the store. If you really want to be festive you douse it in brandy and then set it on fire which I really wanted to do but we all decided it wasn't worth spending 30 quid on brandy no one would drink just for a little pyrotechnics. So here is our Christmas pudding in all of it's non-fire-y glory. 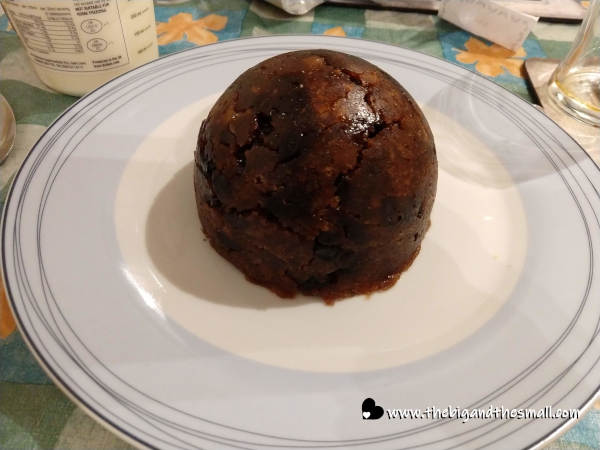 Once you get your chunk of pudding, you dollop it with some double thick cream. It kinda looks like whipped cream, but the texture is more like a super thick sour cream. The taste is kind of like sour cream that hasn't gone sour yet, but it's not sweet either. And the cake itself? Well, let's just say it's not my style. It is incredibly dense and chewy, and not very sweet. This is another dish (like the sprouts) that Steve said people will serve whether anyone really likes it or not. 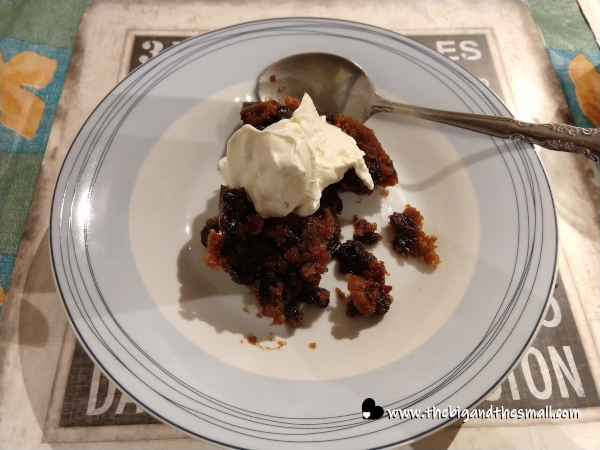 Joel wanted to keep up with whatever Steve ate so when Steve finished his portion of Christmas pudding, so did Joel! He wasn't super happy about it though. 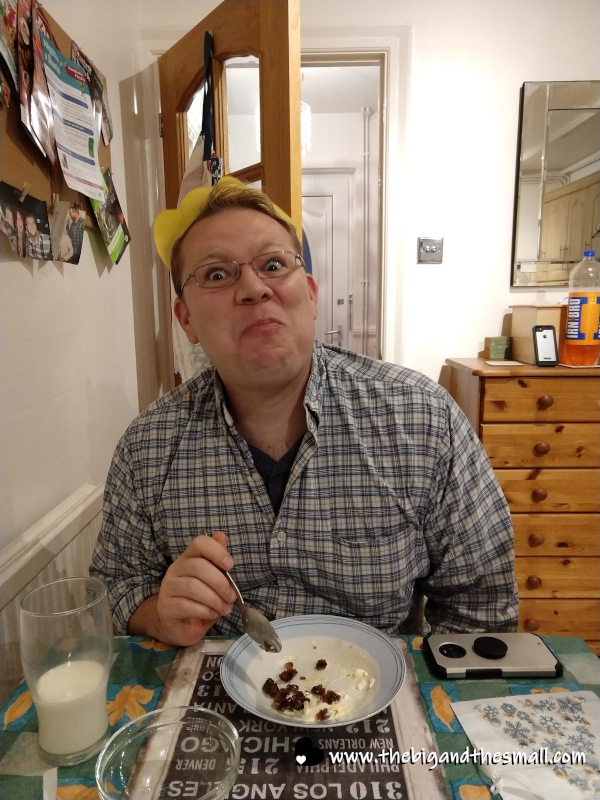 As a consolation dessert, Steve had a trifle waiting in the wings. This mix of rasberry jello, cake, and sweet cream was much more to my liking and it was the perfect way to end Christmas dinner. 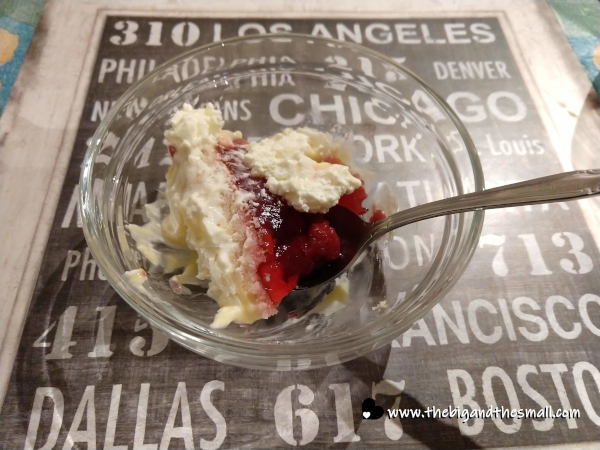 And if dinner wasn't amazing enough, Steve had some more surprises up his sleeve for us! Check back tomorrow to read more about our British Christmas fun!