We haven't eaten out as much in Wales as we might have liked to (the less we spend the longer we travel) but we knew we couldn't leave the area without trying something very unique to here - a Welsh Breakfast! So yesterday when we set out to Mumbles to do some shopping for our patrons, we made sure we had time to stop at a local diner as well. 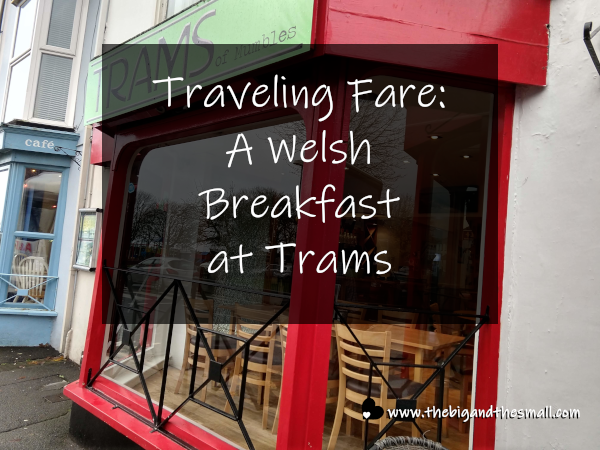 On Sunday night I did a lot of research about where we should go to get a Welsh Breakfast. A lot of places serve it around here, but I wanted to make sure we went to a well-rated, authentic place, where we could get a good amount of food for a decent price. After about an hour of looking on trip advisor and Google I settled on a place called Trams. It was almost exactly a two mile walk from our housesit, and would have been a pleasant walk except for the fact that we got rained on several times. I was wet and hungry when we arrived, so I was hoping the food would be good! 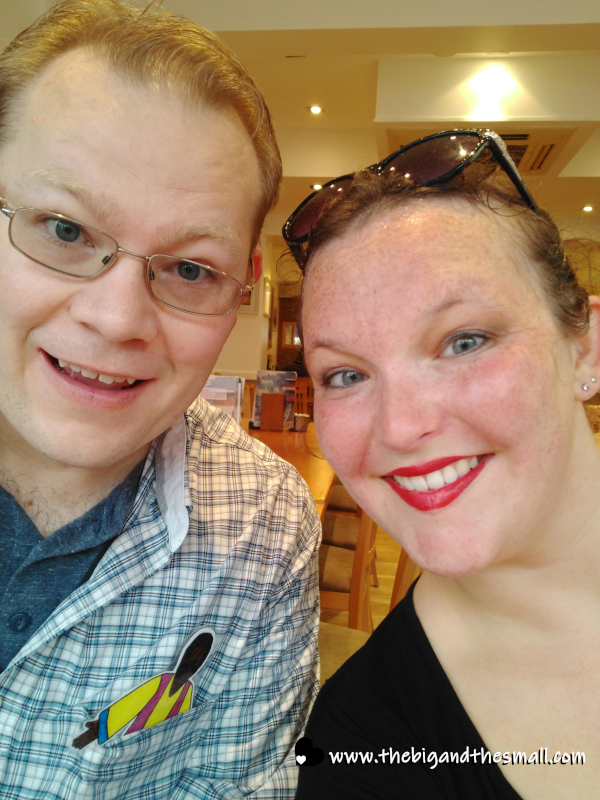 You might be familiar with a full English Breakfast - it generally consists of eggs, bacon, sausage, hashbrowns, beans, toast, tomatoes and mushrooms, with some variation depending on where you get it or who is making it for you. It also includes tea, of course! The Welsh Breakfast is very similar, but with the addition of two important pieces - cockles and laverbread. Not sure what those are? Neither were we until someone told us! Cockles are sea snails, and laverbread is a fancy word for seaweed. I can't say either of us were really excited about trying these local delicacies, but we wanted to anyway! After looking at the menu we went with the Welsh Breakfast for Joel, and I ordered the Mighty, so we could try the most things. 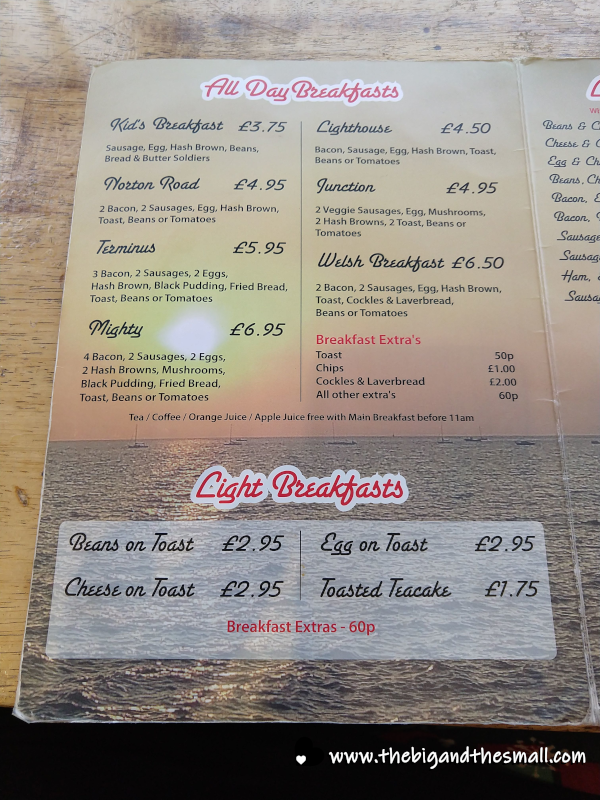 Ordering two meals was a rookie mistake - we should have split one! If we had been thinking we would have ordered just the Mighty with the cockles and laverbread as a side - that way we could have tried everything without getting duplicates of some things - we ended up with so much bacon we couldn't eat it all! The food arrived quickly, looking hot and delicious (well, most of it). Here is Joel's Welsh breakfast, complete with bacon, sausage, eggs, hashbrown, toast, beans, tomatoes, cockles and laverbread. The tomatoes were peeled and cooked, a style of serving we hadn't encountered before. 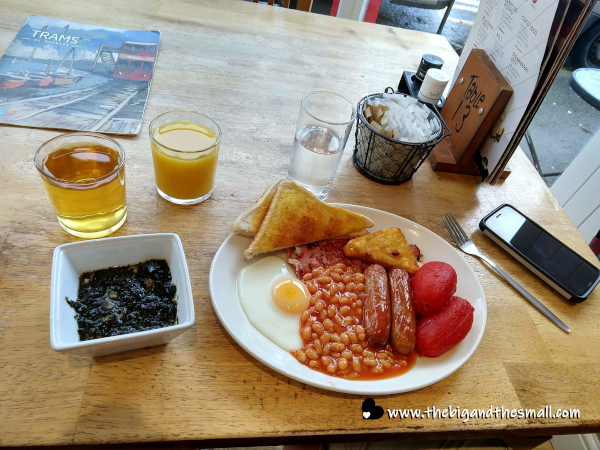 The Mighty came with bacon, sausage, eggs, hashbrowns, mushrooms, black pudding, fried bread, toast, beans, and tomatoes. I loved the mushrooms and surprised myself with how much I liked the fried bread. It's literally just plain white bread that has been fried, usually in the grease left from the bacon and/or sausage. Paired with the baked beans it was quite tasty, even though I still think beans are a weird choice for breakfast. 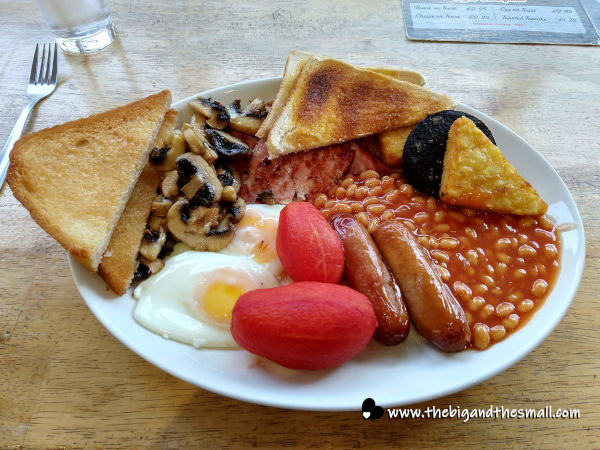 Joel asked the waitress how best to eat his meal and she said she likes to mix the cockles and laverbread with the beans, then put it on the toast. It was... edible? I think that's the nicest thing I can say about it. I took a bite and it kind of tasted like cooked spinach but with a strong ocean flavor. I don't think I actually had any cockles, but Joel did and said they were "fishy and slimy." I can't say it's something we would order again, but Joel did eat it all. 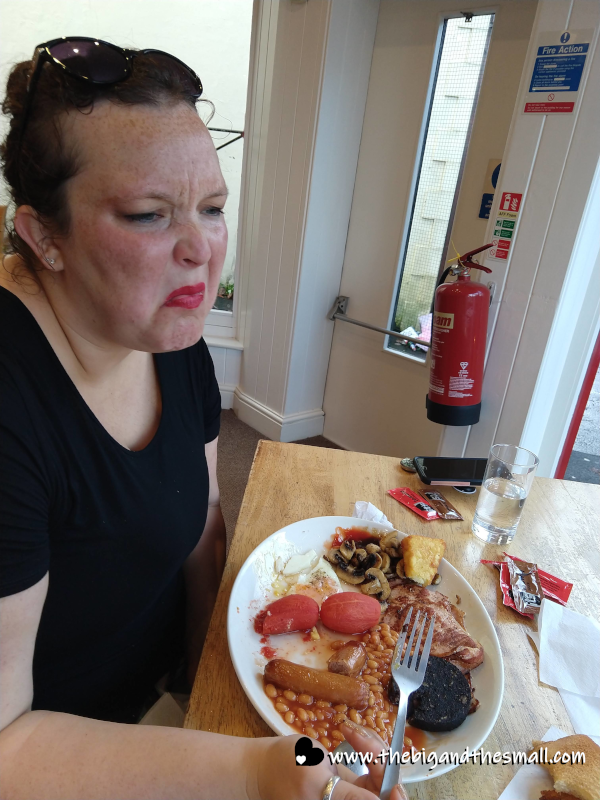 The other new-to-us thing to try was the black pudding that came with my plate. The picture above is my reaction to trying black pudding, which is a special type of blood sausage (here's the Wikipedia link if you really want to learn more.) I did not want to try this but I make a point of trying all new foods that come my way, even when I'm pretty sure I won't like it. Sometimes I surprise myself. This time I did not. As expected, I did not like black pudding. I will say it wasn't as flavorful as I expected, so it was really more the texture of it that I didn't care for. Joel ate the rest of it after my one obligatory bite, and he said "It's okay, I don't know why it's a thing. It's not good but it's not bad."

Overall we were impressed with Trams and we would eat here again. It was clean, friendly, fast and the food that we liked was really good. If you are ever in the area and want to try out an authentic local breakfast, this is your place to go!