Thanksgiving Pizza (aka The Best Thing to Make with Leftovers)

I love Thanksgiving - the shopping for food, the cooking the food, the eating the food... all with family and friends that feel like family, and a time of giving thanks for all that we have. But my not-so-secret actual favorite part of Thanksgiving? The leftovers! 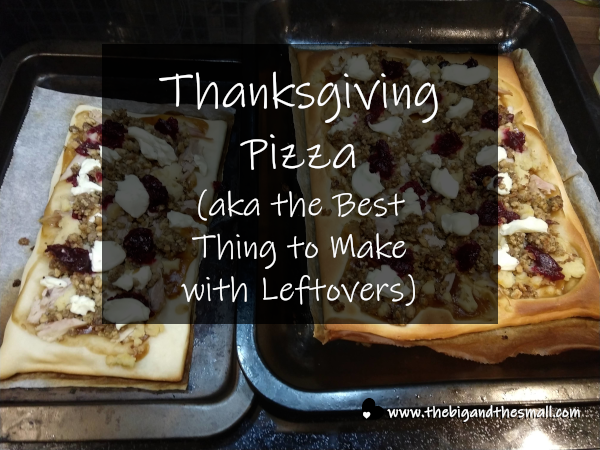 I have fond memories of going back to college after Thanksgiving break with a car piled full of clean laundry and countless tupperware containers full of Thanksgiving food. Back in my dorm room I would cram them all in to my mini fridge, and spend the next week skipping the dining hall in favor of leftovers. I loved making the perfect plate that was a combination of all my favorites, and figuring out how to ration the gravy so I had both the perfect amount on each plate, and enough to last me through all of them. I would heat it up in my (technically wasn't supposed to have one) microwave and enjoy a taste of home right there in my dorm. That was usually already decorated for Christmas. Ah, those were the days!

Nowadays I still love a good plate of everything reheated up just like I had it on Thanksgiving day, but since I have more than a microwave to work with I also like to get creative with my leftovers. Last year sometime in early November we were visiting a friend on the eastern side of Iowa, and we ordered pizza from a local restaurant. We always like to try new things and they had a Thanskgiving pizza on the menu! It sounded weird but turned out delicious, and so last year and now this year I have my own version of Thanksgiving pizza with whatever leftovers I have on hand.

I start with a premade pizza crust because I'm lazy, but you could always use homemade if you like. I particularly loved the one I found here in Wales, it even came with the parchment paper so I'll had to do was unroll it onto the baking tray! (And cut it because it was too big for my tray). I baked it for a few minutes with no toppings, then took it back out to start layering. I start with leftover gravy as the sauce! 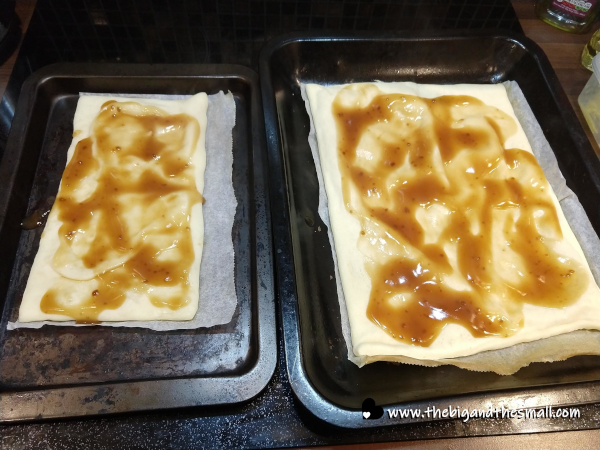 Next up - turkey! I made Joel pick all the meat off the turkey because I don't like playing with animal carcasses, so I just had to pick the pieces out of the leftovers container. I did cut some of them into smaller pieces - you're going for bite size here. 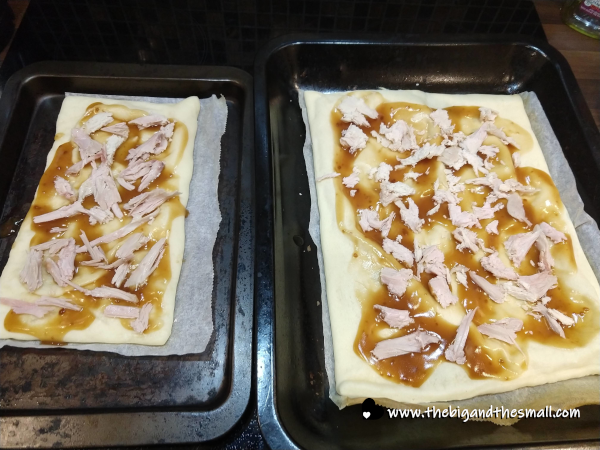 After these basics you can really get creative and use whatever leftovers you have on hand, I know not everyone has the exact same side dishes at Thanksgiving. I had some mashed potatoes left so on they went. (I also had sweet potatoes but I made an executive decision that those don't go on pizza.) 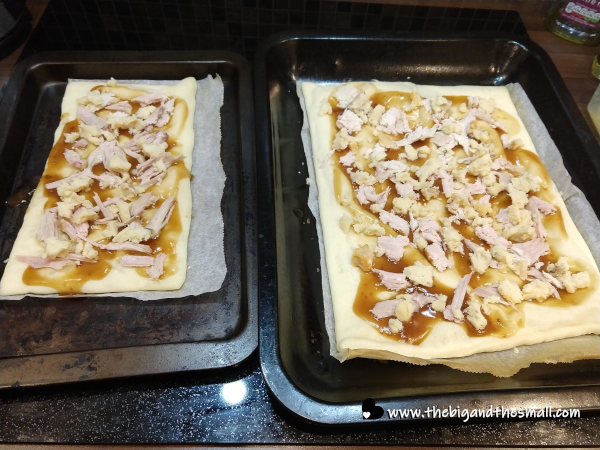 Then I had some stuffing so I put that on there, too! 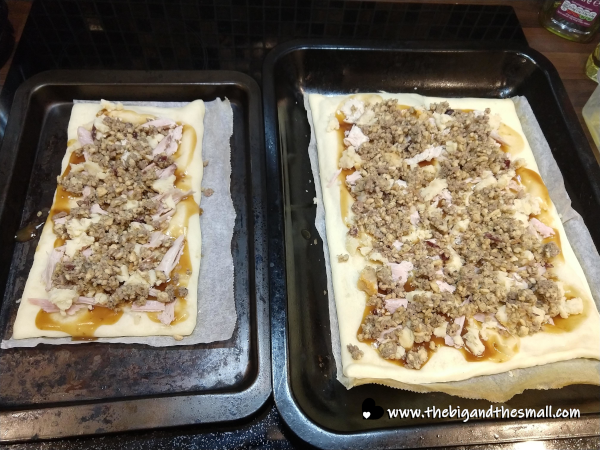 This next part sounds weird but I promise it tastes good - I added leftover cranberry sauce! This was the homemade kind but I'm sure the canned stuff would work too. Just dot it all around the pizza somewhat evenly. 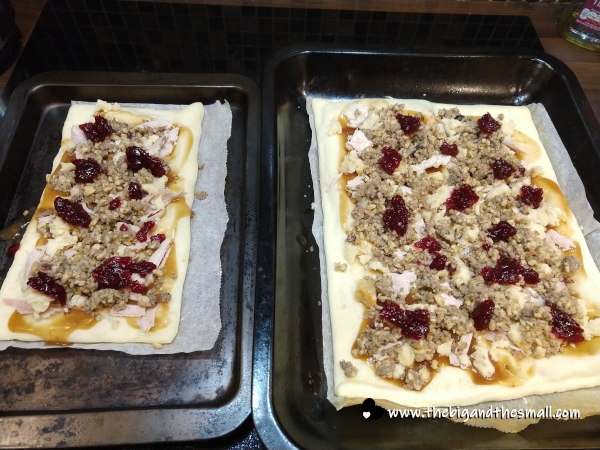 The final step also sounds a bit weird, but again, it's good. For the cheese - cream cheese! Just like the cranberries dot it all around the pizza, don't worry about even coverage. Once it get's all melty it's easy to swirl around so it covers each slice more evenly. 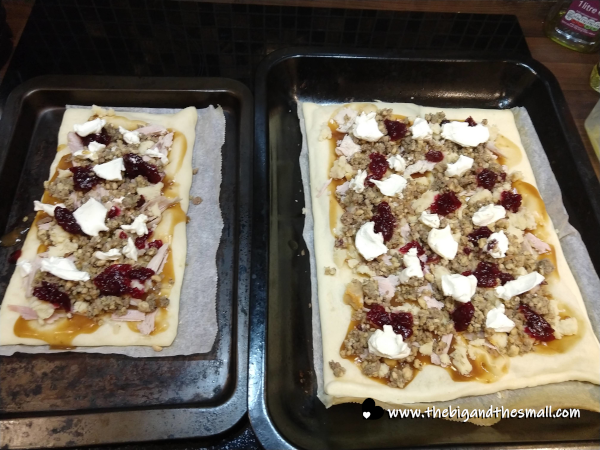 Once all the toppings are on, throw it back in the oven till everything is warmed through, the cream cheese is melted, and the crust is done. It's usually best to follow the baking instructions on whatever crust you are using. 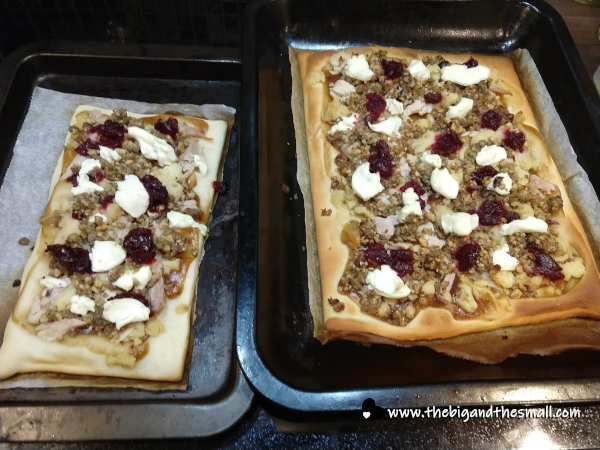 Then just cut into slices and serve! I'm a sucker for gravy so if I have enough I also smother each piece in more of that. I know the idea of Thanksgiving pizza sounds kinda weird, and the pictures aren't the most appetizing (a food photographer I am not) but I promise it's worth a try. 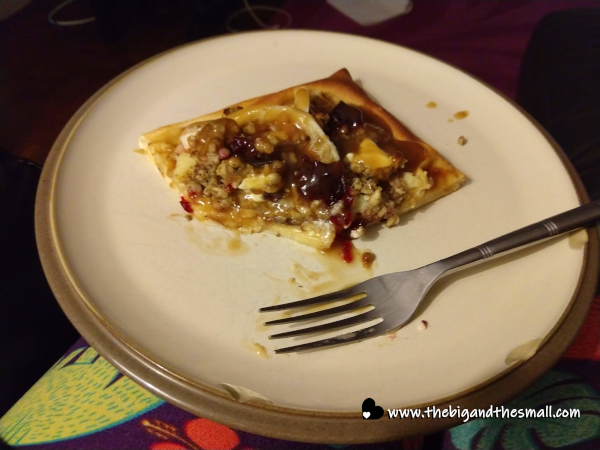 It's probably a bit too late for this year's leftovers, but bookmark or pin this page so you can be sure to give it a try next year. And if you ever do try it, please come back and tell me what you think!