Enjoying an American Thanksgiving in Wales 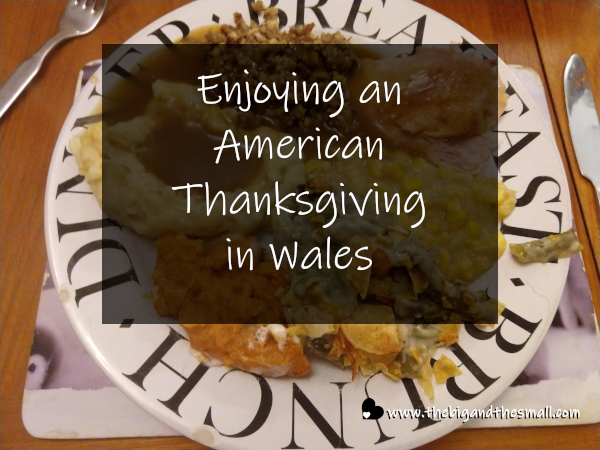 Besides Joel and myself, we had Andy & Emily and their three year old (their other 3 boys came by after various after-school activities and ate later in the evening), Steve, Andrew (his wife Fi was ill and couldn't make it though we sent a plate home for her), and Pat & Dennis (the parents of Andy who we are housesitting for). Just like a true American Thanksgiving we had more people than would usually fit in the house or around the dinner table but we made it work! Everyone was excited to dig into some unfamiliar-to-them food.

First up of course we had the turkey. Now, granted, turkey is not an unfamiliar food here - but it is odd to have it in November! In the UK turkey is the food for Christmas day, just like for us it's the food for Thanksgiving. Right now, all the stores are advertising fresh turkeys arriving December 19th. Emily made hers the Welsh way with bacon and I think that's how I'll always make it from now on! (No one really ate the bacon, it was more to keep the turkey from drying out and add extra flavor to the juices.) 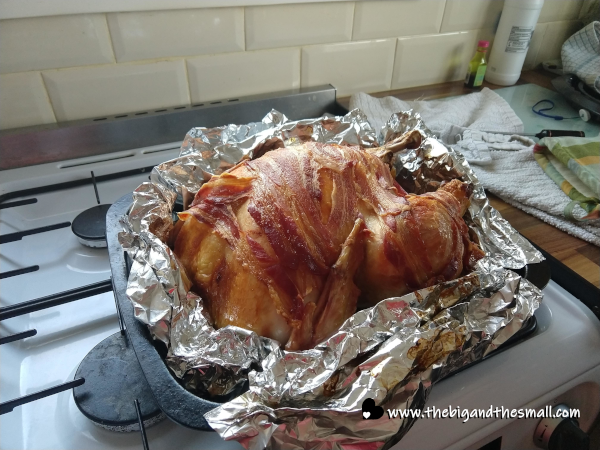 We laid everything out so people could go through the kitchen buffet style and make their own plates. I stood close by so I could tell people what everything was. In this picture we have the corn pudding in the crock pot, the sliced turkey, and the gravy that Emily made. I was going to cheat and use gravy granules (I'm lazy!) but she whipped this up from the turkey drippings (just like my mom would at home) and it was the perfect addition. 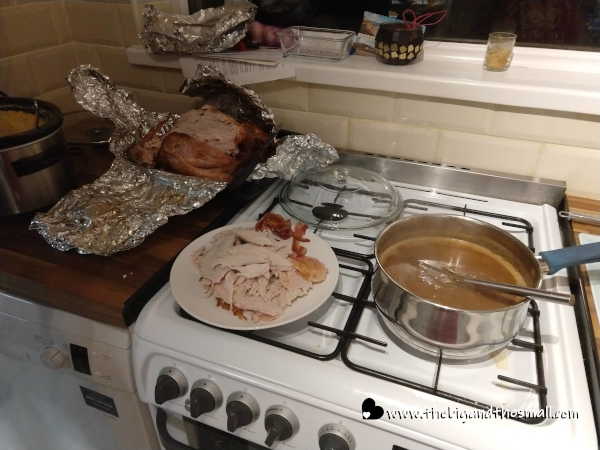 The next section had the baked stuffing, sweet potato casserole, green bean casserole, and mashed potatoes in a crock pot. I had to keep explaining to people what the green bean casserole was and what it had in it, as well as the sweet potatoes - everyone really marveled at the marshmallows on top. They did cook a little unevenly as you can see - I'm not used to using a gas oven so the parts closer to the literal flame in the back got a little extra crispy. 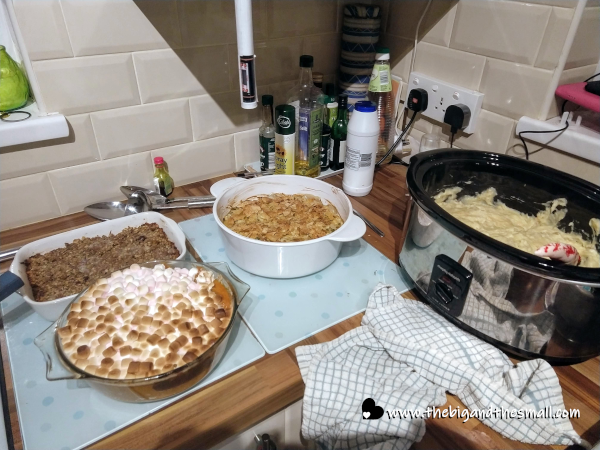 On the table I had the homemade cranberry sauce set out and I instructed everyone to be sure to try some of it with their turkey. Someone mentioned that the idea of cranberry sauce with turkey has started to make its way over the pond and some people will now eat it that way at Christmas. I was super excited to dig in to my perfect plate of Thanksgiving food, my favorite part is drenching most of it with gravy! 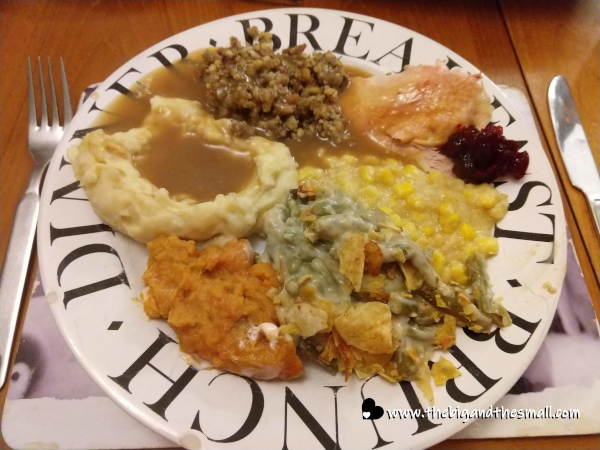 It was so much fun to sit an eat with people who had never had some of these foods before and see their reactions. For the most part they loved everything! The sweet potatoes were a big hit for sure, everyone had been skeptical of the marshmallows but agreed they were delicious. Steve said at one point that he had tried many of these dishes before, but never all at once, and the combination was really good. Almost everyone went back up for seconds at some point, myself included, so I think it's safe to say the food was loved! I got so engrossed in eating and talking with people that I forgot to take pictures of the group, but I did get this one of Andy & Emily's dog, Cooper. He was such a good boy all day, never once stealing food, though he did perfect this "I'm not officially begging but if you gave me some food I would love you very much" look. 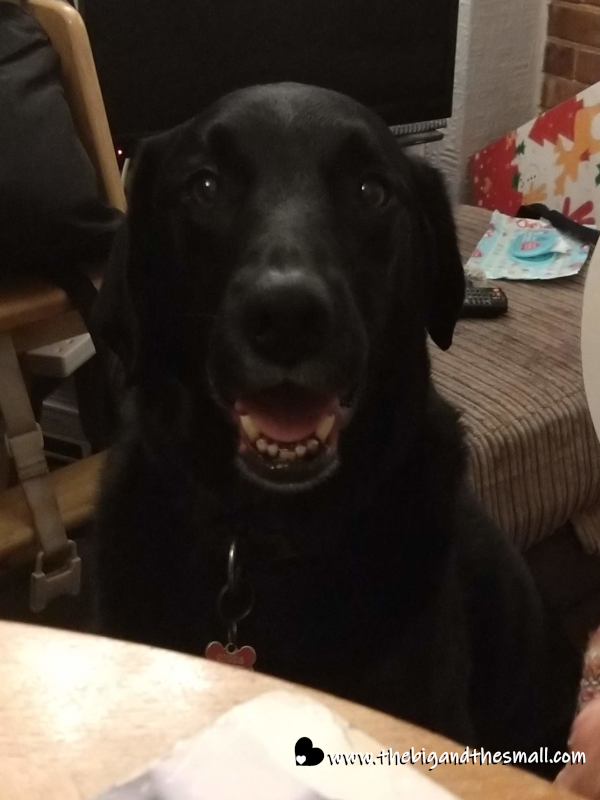 Later I found Cooper passed out on the couch, looking exactly how I felt after eating all that food! 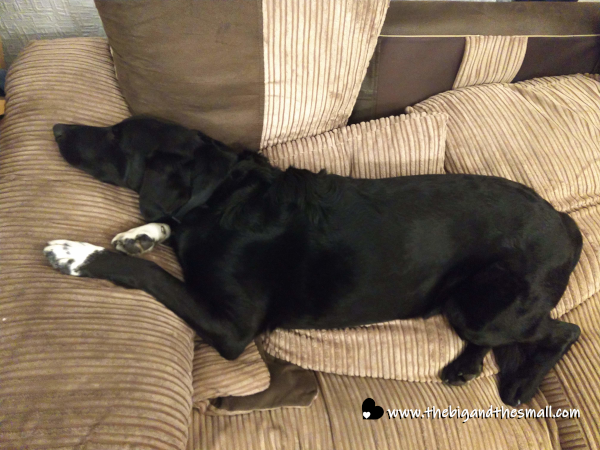 After stuffing our faces with the main event we let our food digest for a while before digging into dessert. But we didn't wait too long as everyone was super excited to try the pumpkin pie! It's not really a thing here (as evidenced by how hard it was to find the dang pumpkin) and I think all but one or two people had literally never tried it before. I was almost more excited to serve it to everyone than I was to eat it myself! I didn't grab a picture of the finished pie but it turned out perfectly (despite my guessing on cooking temperature and time). I didn't even get a picture of my perfect slice before I dug in so I stole this one from Steve. 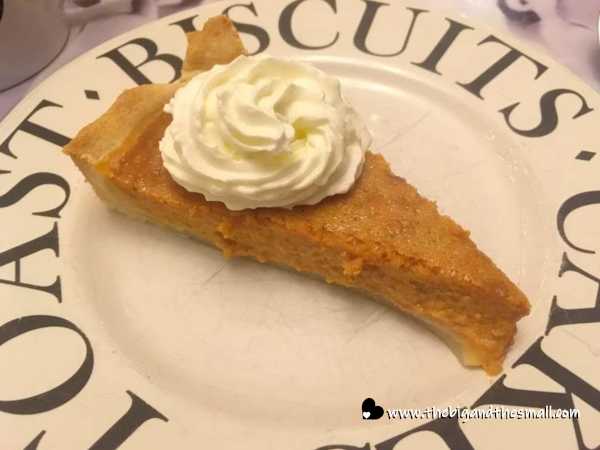 Verdict - everyone loved it. Even after the big meal not a single crumb of pie was left on anyone's plate. Joel and I even think that it is the best pumpkin pie we have ever had. I served it with whipped cream in a can (aka squirty cream) from the Co-op and it was the perfect topper. I'm one of those people that likes their pie drenched in the stuff - I end up with probably equal amounts of pie and whipped cream. I did manage to snap a pic of my pie towards the end! 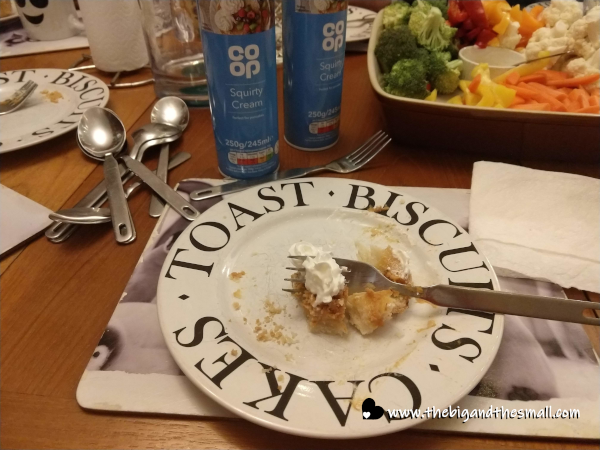 After dinner we settled into deeper conversations, including the kind Joel and Steve were most looking forward to - politics! Is it really an American Thanksgiving if politics aren't discussed at some point? They took on a different flavor here as not only were American politics discussed, but Brexit got a good amount of attention. Also for the most part everyone was on the same page so we didn't have any heated arguments. There were a lot of hand gestures though so every picture I have has some blur in it! 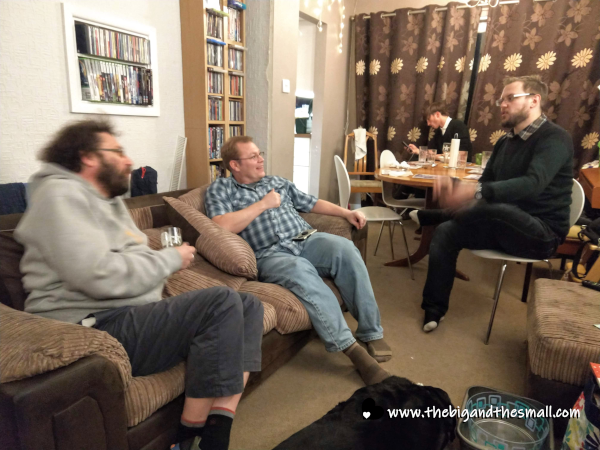 I'm pretty sure between Andrew, Andy, Steve, and Joel all the ills of the US and the UK were solved that night. Too bad no one in charge listens to them! The after dinner time did take on some British flavor as well when Andy started serving everyone tea - loads and loads of it! Steve complained about how full he was after dinner and then I saw him drink at least four cups of tea which had me cracking up. He said that Brits have a special stomach just for tea! I've never seen anyone drink tea after an American Thanksgiving but I let it slide.

It was close to 9:30 before we left, and we probably could have stayed all night chatting and enjoying ourselves but we started to get tired.  Joel and I felt so blessed to have such a wonderful Thanksgiving even though we are far away from family and friends back home. Everyone else really enjoyed it as well and several mentioned they wished they had something like this to celebrate every year. It is so much fun to share some of our own holidays and traditions, along with getting to celebrate all of theirs (like Harvest, Guy Fawkes Night and Armistice Day). Soon we plan to celebrate Christmas British style and I can't wait!

I hope everyone reading this also had a wonderful Thanksgiving if you are in the US, or just a great Thursday if you live elsewhere!