Cooking An American Thanksgiving in Wales

Yesterday I shared all about the adventure that was shopping for the ingredients I needed for an authentic American Thanksgiving meal. Today I'm going to share all about what we made and how we made it! 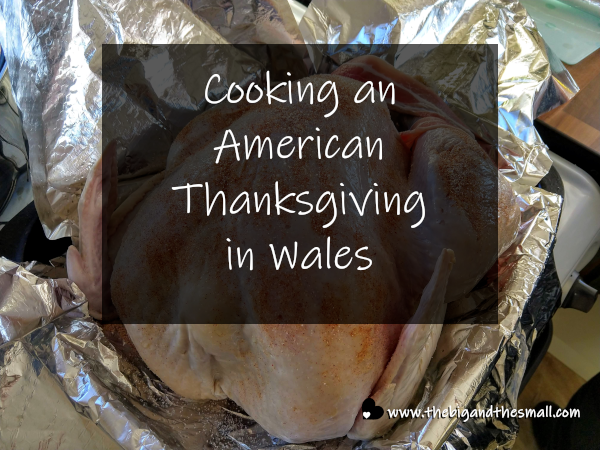 As anyone who has ever prepared a big holiday meal knows - it's a lot of work! For the most part, however, I enjoy it. I don't think I'd want to undertake it every year, but it seems every few years I get to host and I get a kick out of it! The logistics of the meal stress me out a bit, though (how do you get everything hot and ready at the same time, ack!) In past years I've stayed up super late the night before prepping everything I could so that the next day I could enjoy more time with people. This year, since we were actually hosting in someone else's house, I couldn't really do much the day before. But I did make Joel boil and peel the eggs (my least favorite part of making deviled eggs) and I got the cranberry sauce made. 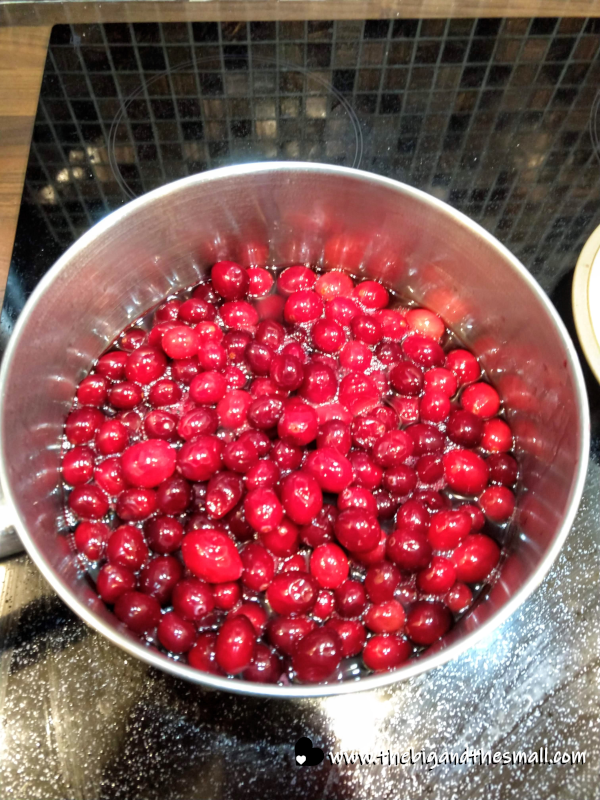 Around 9am Thursday morning Emily picked me up along with 6 bags of groceries, and we headed to her house to get started on the feast. Emily and her husband Andy (the pastor of our local church) were so gracious to host Thanksgiving, and Emily was a huge help in the kitchen, even taking the lead on the turkey and the gravy! The first thing we got started was the corn pudding - all you have to do is mix together the ingredients in the crockpot, turn it on, and you're set! One side dish down, four to go... 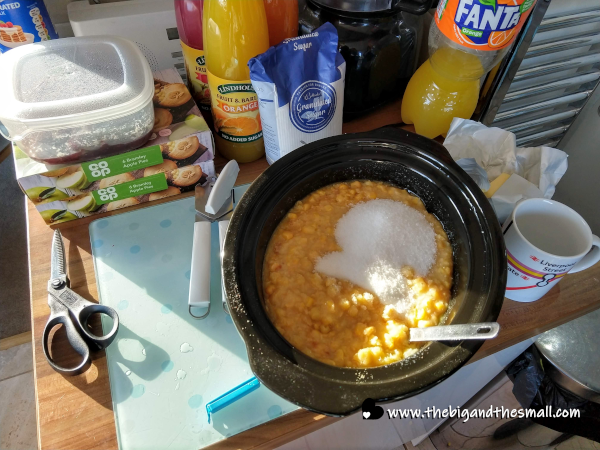 Next, we got the turkey in the oven. Emily prepared her turkey pan with foil to catch the juices and cover up the bird so it wouldn't get too brown. She also shared her secret to perfect, juicy turkey - bacon! Or, technically, what they call "streaky bacon" here (what they call bacon we call Canadian bacon. Confused yet? Check out more crazy American vs. British terms here). I added some seasoning to the turkey first - a spice mix that approximates Lawry's seasoning salt - then we layered it with bacon, covered it with the foil, and put it in the oven. 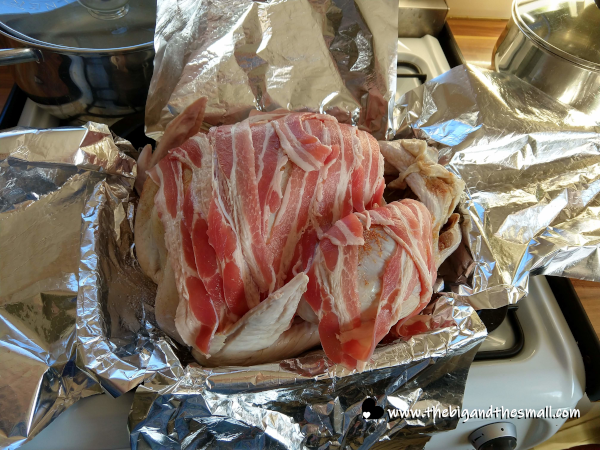 We decided to get all the meat cooking out of the way at the same time, so next up I browned the pork mince that goes in the special stuffing balls I make and serve as an appetizer. One year my mom discovered this recipe that includes stuffing, sausage, and cranberry sauce all rolled up in a delicious ball and it's been a staple at our family holidays ever since. I overestimated how much stuffing I needed and we ended up with so much of this mix we baked some of it and served that as the regular stuffing side dish as well. 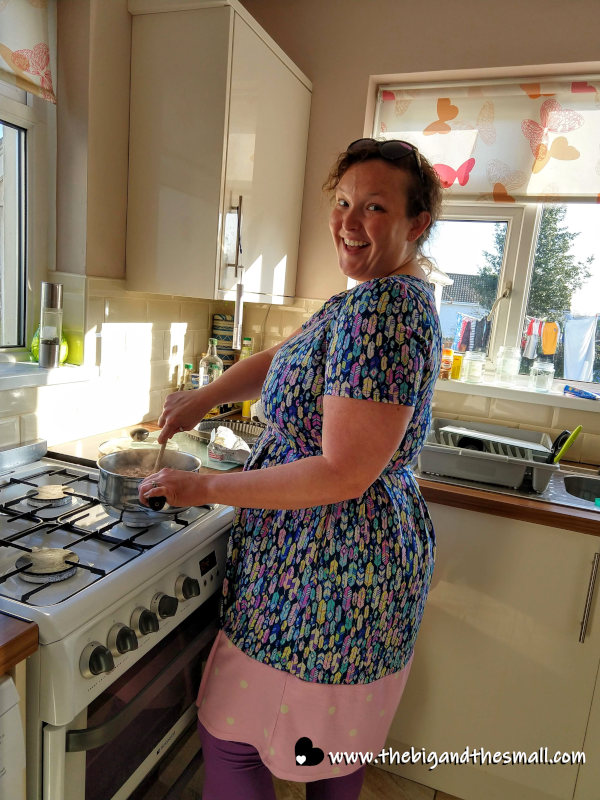 Next I whipped up that most American of side dishes - green bean casserole! It was actually created by Campbell's test kitchen in 1955. I was able to find canned green beans and cream of mushroom soup (though not Campbell's) but we could not find French's Fried Onions. So I put together the casserole and later topped it with some mature cheddar and chive flavored crisps we found at the Co-op. It ended up being a pretty close approximation! 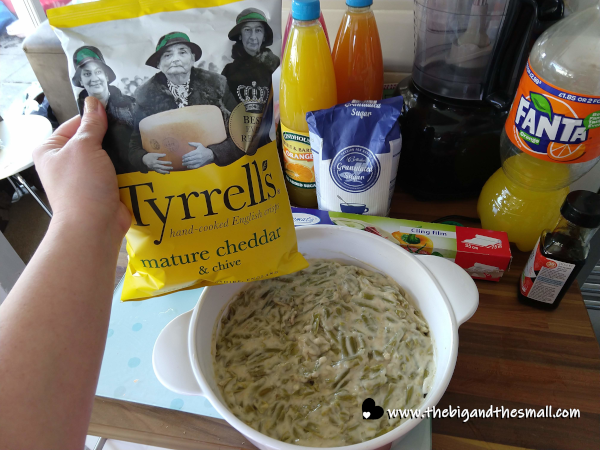 At this point Emily offered me an apron to wear (perhaps she noticed how messy I can be when I cook) and it was a super awesome one. I almost didn't give it back at the end of the day. It's hard to read in this pic (her three year old was making me laugh) but it says "I'm not only a great cook, I'M WELSH" and has a picture of the dragon from the Welsh flag. 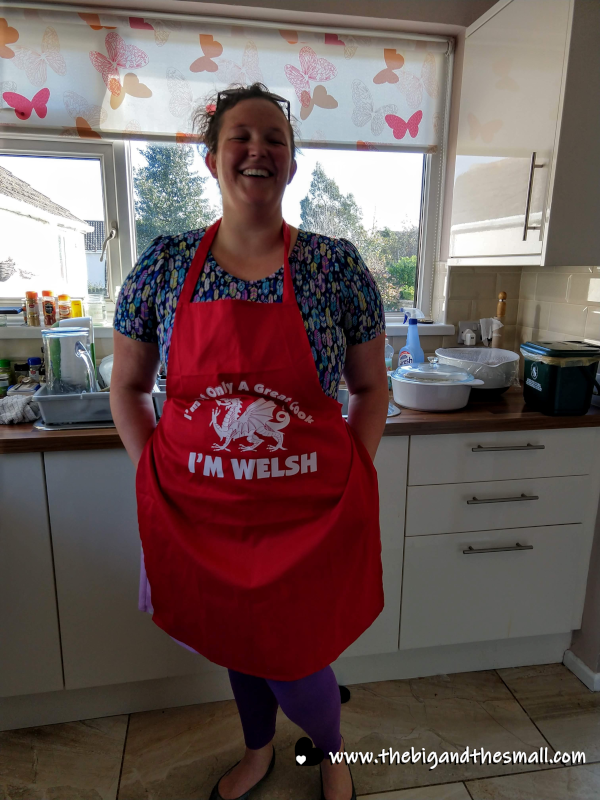 With three side dishes down we had two to go - both potato dishes. The sweet potatoes we peeled, boiled and then I mashed them with cream, butter, and brown sugar. I didn't measure anything just put stuff in until the mash tasted good to me (I don't usually like sweet potatoes but put enough sugar in anything...). Then I put them in a dish ready to be topped with marshmallows and then baked! 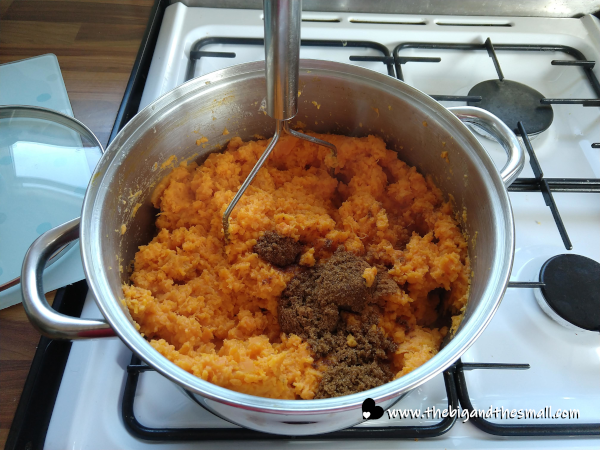 My secret to awesome regular mashed potatoes is twofold - do not peel them and add cream cheese! I think Emily thought I was a little nuts for not peeling my potatoes but she went along with it. This time I also added some cream since I had some left from the sweet potatoes, tons of butter, and lots of cream cheese! I also season it with lots of pepper and seasoning salt. We put the potatoes in a crockpot to stay warm until dinner, and everything else was dished up and ready to heat up closer to meal time. 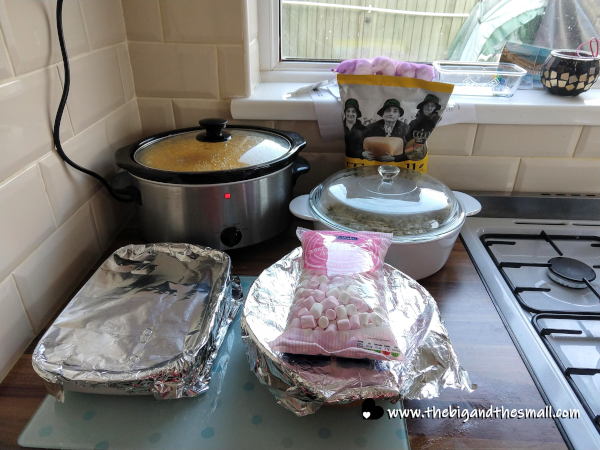 We took a short break for lunch at one point in the morning, and now that most things were prepped and ready we sat down on the couch and watched part of a Christmas movie on TV. Then we figured out how to work in the living room to get the deviled eggs prepared. Emily says here they make a similar dish except they use curry powder and call them curried eggs! Ours we made with the traditional Hellman's mayo, French's yellow mustard, pepper, and plenty of paprika for the top. (Yes I made tons of them, you should see how my husband can put away deviled eggs). 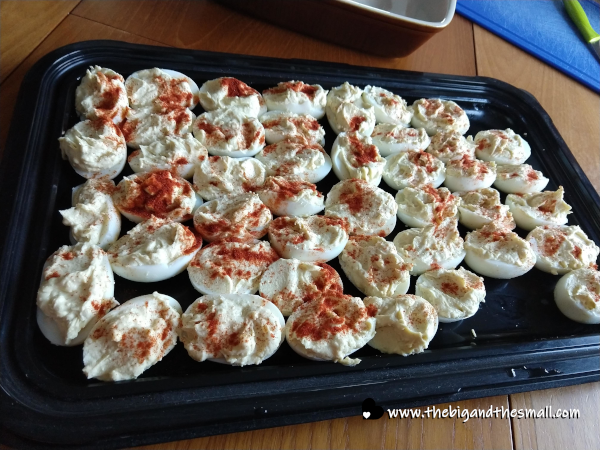 When the guys arrived around 2pm, I put them to work chopping veggies for the veggie tray. It's one of my least favorite things to do and they needed to earn their supper! They did a great job and just look how colorful this tray turned out! We had broccoli, cauliflower, sweet peppers, carrots, and tomatoes all from the Co-op and they were perfect. The dip in the center is Paul Newman's ranch dressing which Steve found for us somewhere after we complained in this post about not being able to find it anywhere. (He showed us!) 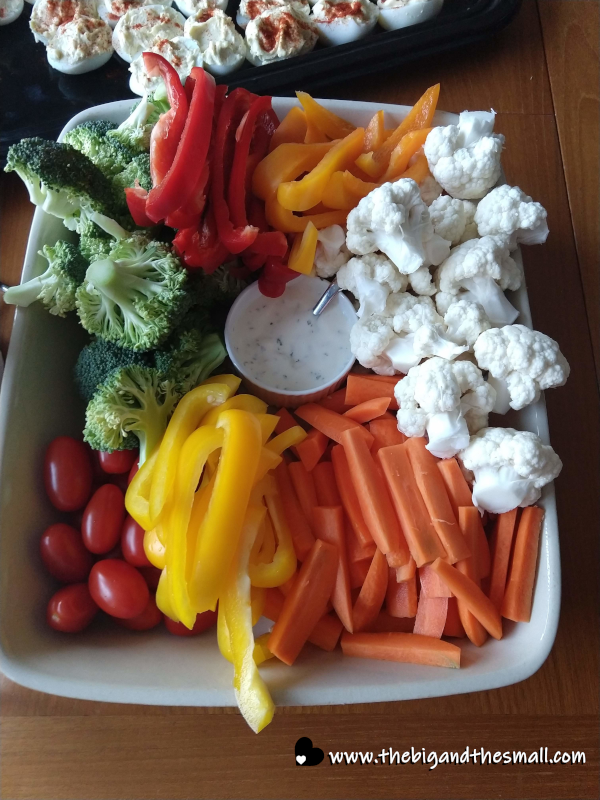 I rewarded the boys with some stuffing balls fresh out of the oven. Turns out it wasn't the best reward though because I messed up this first batch. I forgot the egg in the mix so they weren't holding together well, and Emily and I tried to forgo the butter topping to save some calories, so this first plate turned out a bit dry. Turns out Thanksgiving is not the time to skimp on the butter so I added it generously to the rest of them (and the stuffing side we baked in the oven) and the rest were much more delicious! The guys jumped on this grenade for me so the rest of our guests could try the tastier ones later. 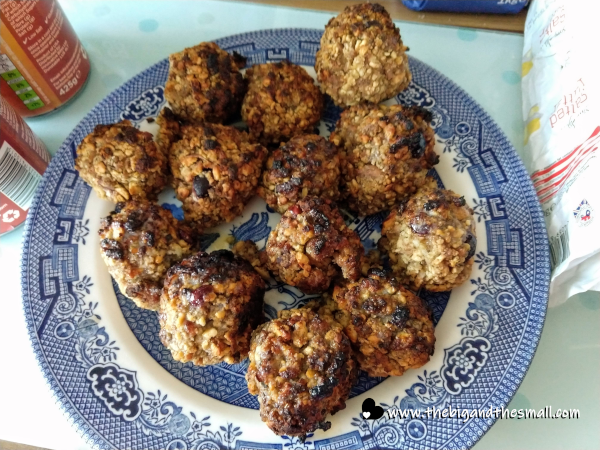 The last thing I needed to do was get the pumpkin pie ready! I did it in the living room so I could hang out with everyone, and they all ended up watching in fascination as I put it together. Steve said the canned pumpkin did not look like he expected, and they all were guessing at what kind of spices would go in the pie. (Ginger, cloves, and cinnamon, no nutmeg like several people guessed!) I was a bit concerned about the pie as I was using unfamiliar brands, and guessing at measurements since I had no measuring utensils, but it turned out well! 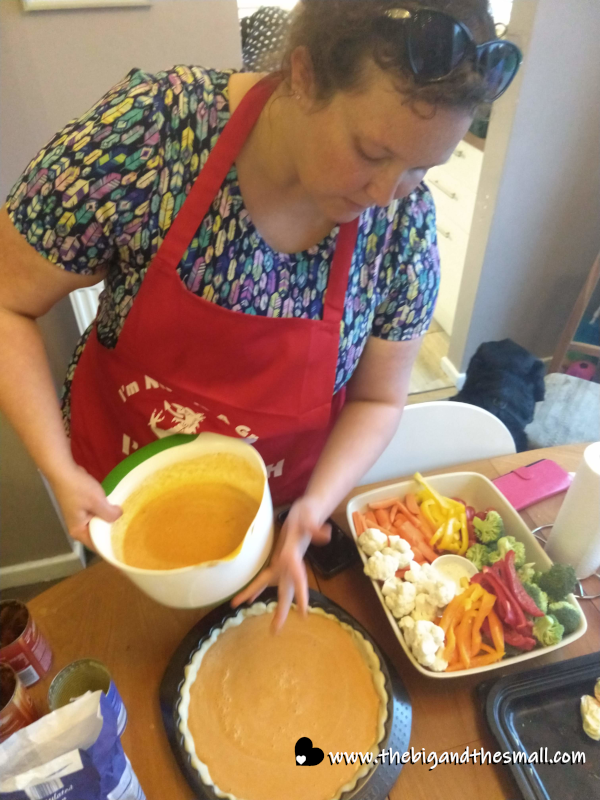 After that we had plenty of time to kill until the turkey finished cooking and it was time to heat up the side dishes. Joel did his best to find us a way to watch the parade and some American football. He got both to work on YouTube for a while, but not for very long. Luckily, I think it was enough to give our guests a taste of what the entertainment and background noises of a true American Thanksgiving would be! We had to wait until normal dinnertime to eat since it isn't a holiday here and some people had to work during the day (how unfair!). It made the schedule of the day feel off from home - we ate the full meal at the time we would usually be digging in to leftovers - but it was still awesome all around. I'll share all about the eating and reactions from our new friends tomorrow!

p.s. If you want to read the next chapter of our Thanksgiving in Wales, click here!