The Oldest Pub in Swansea

After an afternoon at the movies and a fancy dinner at McDonald's we were looking for something else to do with our night on the town. Knowing how much we love old places (see castles here, here, and here) Steve decided to walk us over to the oldest pub in Swansea, the Cross Keys Pub. The pub dates back to the 1700's, and the building itself dates back to the 1500's. It was only a two minute walk from McDonald's - I love the mix of old and new here! 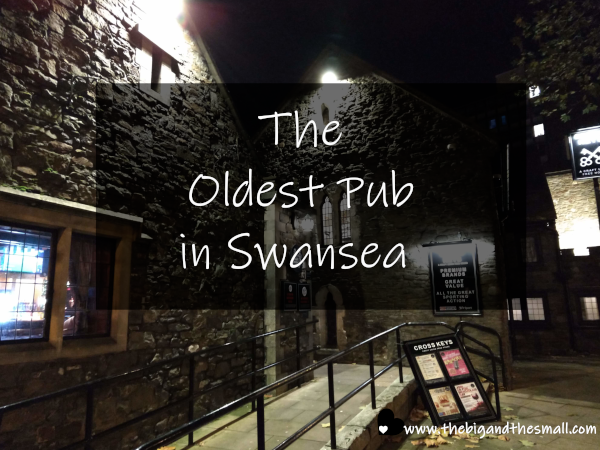 As a general rule, Joel and I aren't pub people. Joel doesn't drink at all and while I like the occasional glass of wine, I usually prefer to buy a bottle for home than spend the same amount of money for one glass at a bar or restaurant. Plus I don't like crowds of people or loud music (I'm basically an 80 year old at heart) so we were a bit apprehensive at first about going to a pub. Luckily, it was  Tuesday night so the place wasn't crowded, the music was at a decent volume, and the inside was warm, welcoming and quite modern.

If you want to see some good pictures of inside the pub, check out this article here about how it was recently updated!

Steve ordered a pint of Coke since he was driving, while Joel and I stuck to water since we are cheap frugal. And incidentally we were really thirsty. We sat down at one of those tall tables you find in bars and spent some time chatting about a road trip we are planning in December (more on that later - it is going to be epic!) When we noticed the dart board in the corner we decided to give it a go! We had to put down £10 as a deposit, which we would get back when we returned the darts. So first, we all got armed with our weapons of choice.

I'm not sure why this Welsh bar had darts that were super American, but those are the ones Joel chose! He couldn't help but feel a little patriotic holding tiny weapons adorned with the stars, stripes and the eagle. 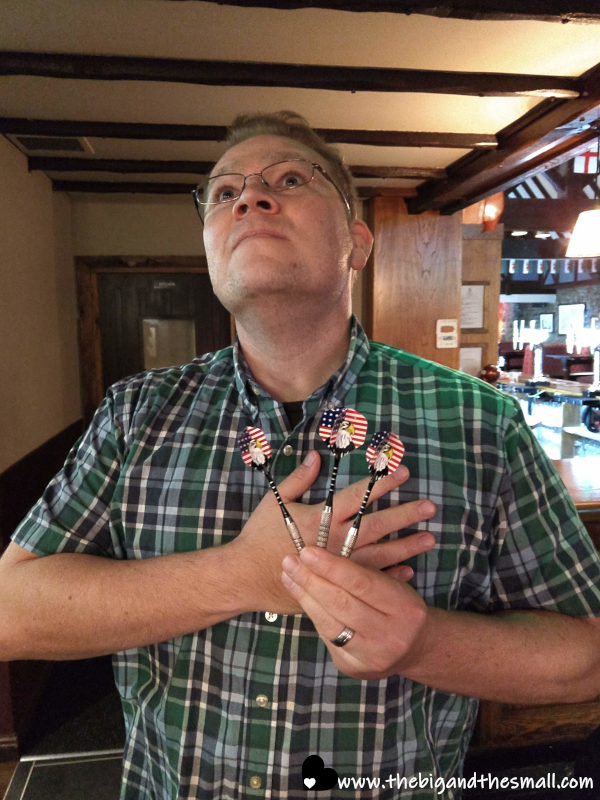 I, on the other hand, was thrilled to find darts with a Halloween motif. A spiderweb and spiders? Yes please! Just call me Morticia Adams. 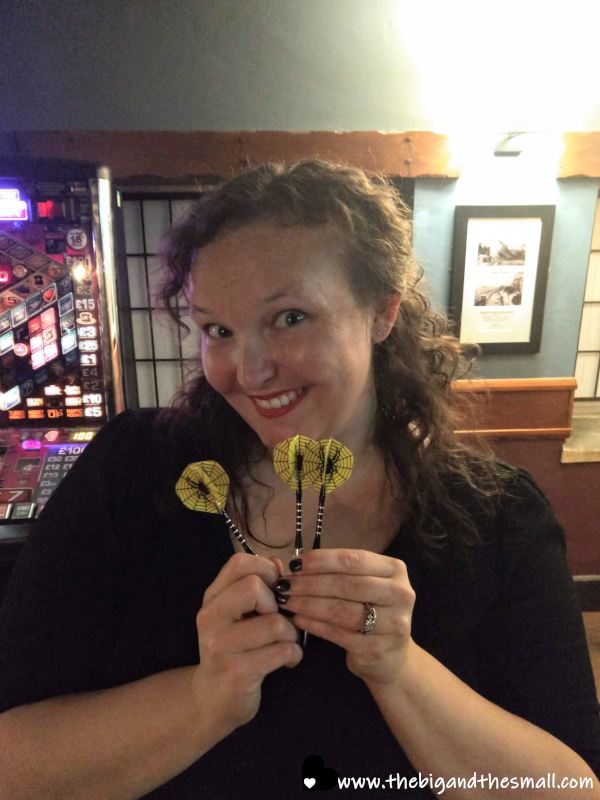 Steve went with the darts that had the racing checkers - maybe hoping for some good speed and accuracy? Later he ended up using a mix of darts, claiming one of the original set was faulty. 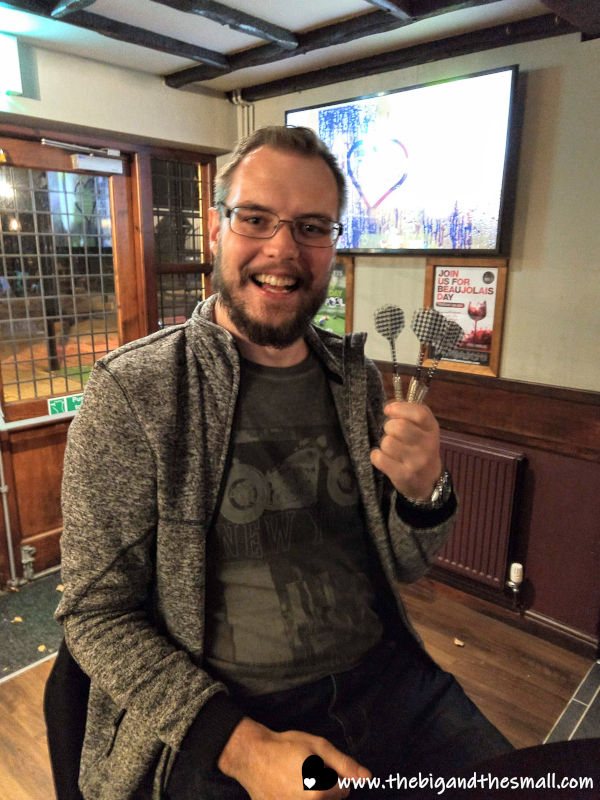 I've never really played real darts before, preferring just to throw them at the board until I get bored with how terrible I am at throwing things. The guys insisted, however, that we play a real game, so we settled on something called "Around the World". In this game you have to get a dart on the wedge marked 1, then 2, then 3, and so on and so forth in numerical order all around the board. The first person to accomplish this wins! 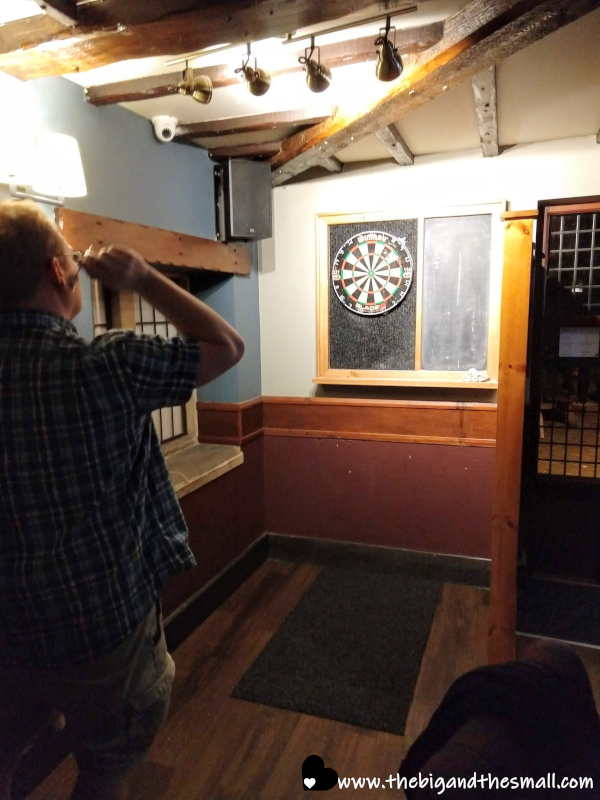 Spoiler alert: Joel kicked our butts. He got to 20 before Steve or I made it to 10. I did get a bullseye at one point but despite it being the most awesome thing you can do in a normal game of darts apparently in this one it means nothing! I was proud of myself anyway. (Let's ignore the fact that I absolutely wasn't aiming for it, lol). 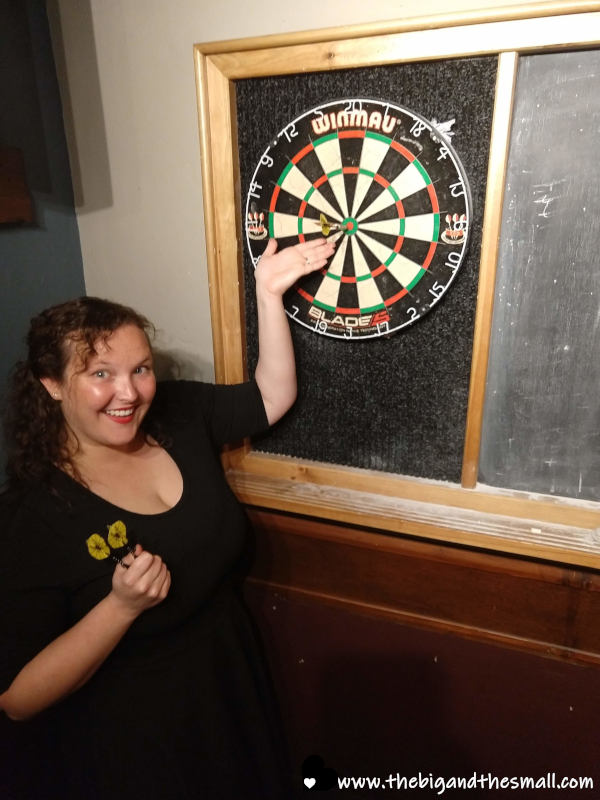 At one point during our game some local lads came over to our table to chat and interact, apparently a very common thing in pubs, especially when you are playing something like darts or pool. They had very strong Welsh accents, to the point that I could only understand about 25% of what they were saying. I kept hoping Steve would have a better ear for it and help translate but we we were all struggling. Finally at one point I understood that one of the guys was asking if he could have a turn with my darts, and I was happy to let him have one, especially after it took me three tries to understand what he was saying.

It's so interesting how even while we are in a country where we technically speak the same language as the locals, sometimes there is still a language barrier. I struggle with accents sometimes, to the point that I'll often watch TV or movies with the subtitles on. I don't get subtitles in real life so I just have to listen really hard and be comfortable asking "what?" more than once. Even when we do understand the words, sometimes the meanings are different here! We've had some really interesting conversations with Steve about those types of things.

One of the best examples I came across the other day was actually in a magazine for Tesco, a local grocery store that delivered our groceries the other day. It was an advertisement for all the Christmas foods you could purchase from the store, and this paragraph was describing a set of 12 Yorkshire puddings. Amidst the glowing review of the food designed to make you want to purchase this they were described with the word "dinky". Well, that threw me off. I'm used to "dinky" meaning something small, insignificant, certainly not a word you would use to advertise something you are selling, as it is rather disparaging. I googled it, and it turns out that the British meaning of the word is the exact opposite of ours, it means attractively small or cute. That's quite a difference for the same word!

Ok well, that was quite a tangent, but hopefully an interesting one at least. Have you come across any language differences like this when you travel or speak to people from other countries? I love learning things like this!