Food We Miss from the USA

We have been gone from the U.S. for over three and a half months now. And while traveling and living abroad has a million amazing benefits, we are starting to miss some things. Besides the obvious family and friends, what do we miss the most? Food! 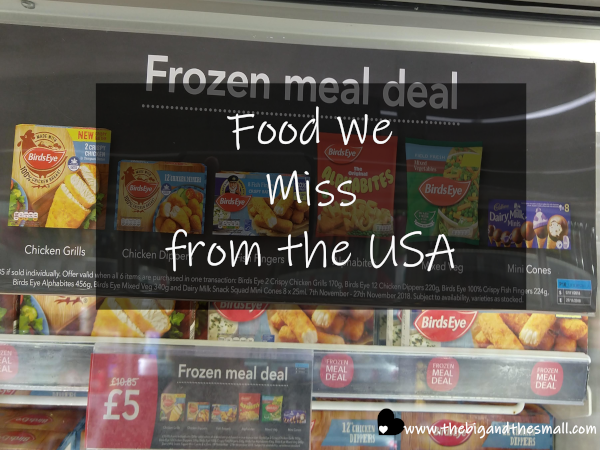 Now don't worry, we are eating plenty well over here. (As evidenced by our continued struggle to lose weight). It's a true joy to try new restaurants and new foods that we have never had and in some cases could never get back home. However, as time goes on, we've started to realize there are some things we truly miss, and can't seem to find abroad! Or in some cases we can find them, but they are prohibitively expensive.

Here are the food stuffs I miss the most:

- Boxed mac and cheese. Look, I love me some homemade mac and cheese, and I've made it quite a bit since we've been in Wales. But sometimes I just want an easy dinner ya know? And boxed mac and cheese doctored up with some frozen peas, extra shredded cheese and pepper used to be my go to. Plus it's soooo cheap back home. Steve did find some here, but he said one box cost £4 which is about $5 for a box. That's crazy!

- Fritos! To be honest, I only eat Fritos for one reason - CHILI. Growing up my mom always served chili in what she called "chili sundaes". You fill a bowl with Fritos, then chili, then top with cheese and sour cream - it's delicious. I was craving this when we arrived in Wales and I was able to find everything I needed to make this childhood favorite except the Fritos! I had to settle for plain old tortilla chips and they were not as good.

- Speaking of tortilla chips, I miss taco stuff desperately. They have it here... kind of... but it's expensive. Salsa comes in these teeny tiny jars that hold, like, one serving. Refried beans are like two dollars a can. I've yet to see taco seasoning at all (though I have seen fajita seasoning which I guess could be considered close enough). Plus pre-shredded cheese is like twice as expensive as blocks so I have to shred all my own cheese! That's hard work, y'all.

- Diet Coke/Coke Zero. Ok, again, technically they have this here. (Also technically not a food but shhhh). But it's different here! Like, literally, different. Apparently there are chemicals and such used in the American version of these drinks that aren't allowed in the EU so they had to change the recipe for here. And whatever they changed must have been what I liked because I can't stand the stuff they have here.

- Libby's canned pumpkin. This is a very specific ingredient I only need for only one thing at one time of year - pumpkin pie at Thanksgiving! That's less than two weeks away and we are planning to host an American Thanksgiving here in Wales so I am wishing I could find some right about now. Someone suggested I make pumpkin pie from an actual pumpkin and I was like, 1. Um, how? and 2. Is that even American? It's not authentic American Thanksgiving if your pie isn't made with canned pumpkin and a Pillsbury pie premade pie crust (in my opinion, don't come at me).

Here is what Joel misses the most:

- Ranch dressing. I didn't feel like we used it all that much at home but maybe that's just because it was always around. Joel has been jonesing for it so much lately he looked up a recipe and is planning to make some on his own soon.

- Speaking of something we are going to make on our own - we also miss Lawry's seasoning salt! (This is on Joel's list but I miss it too because he used it to make my favorite food that he makes, two hour potatoes). I recently found a copycat recipe that doesn't require hard to find ingredients like celery salt so as long as it's a close enough taste we might be okay soon. It does require onion powder which we haven't been able to find yet, but Steve assures us it does exist here. We contemplated buying a 1.2 kg catering size jar of the stuff on Amazon for like $15 but decided that might be crazy.

- Good peanut butter. They have peanut butter here, but it is way more expensive than back home (though not prohibitively so) and, according to Joel, it's not as good. It only comes in small jars (just like the salsa!) and you really have to look for it in stores. Joel used to eat peanut butter sandwiches all. the. time. at home but now he is much more reserved with his peanut butter stores. He would do a lot for a good old jar of Skippy right now.

- Root beer. This is something we didn't have often at home, but when you want it, you want it, ya know? Steve said it's one of the first things he gets every time he goes to the States, so it really isn't around here. A root beer float does sound really good right now...

- Cereal. Ok, they have cereal here, and to be fair, we do still eat a lot of it. I actually think I like the cereal here more than at home; I've found two kinds I'm practically addicted to. But Joel is missing his two favorites from home - Cinnamon Life and Lucky Charms. As far as we can tell they don't even have a knock off of either of those here, in fact, now that I'm writing this, I don't think I've seen any cereal containing marshmallows here. Do you think they actually want cereal to be somewhat healthy here? How weird.

So there's our current list of specific food items we miss from home. Does anyone love us enough to send us a care package? Preferably before Thanksgiving so I can make a proper pie. (Just kidding, don't send us anything, it will cost you a fortune as we found out when my mom sent me a pizza in the mail as a joke). If you were living abroad would you miss any of these items? Have you lived abroad and found yourself missing something oddly specific? Let us know!