I'm pretty sure I've mentioned it before, but it's worth saying again, Halloween is my favorite holiday! Halloween isn't nearly as popular here in Wales as it is in the States, but it is growing as a holiday here. When we went to Caerphilly Castle the weekend before Halloween we were surprised with some spooky activities, and then Steve did some research and found a whole bunch of things happening in the area actually on Halloween. 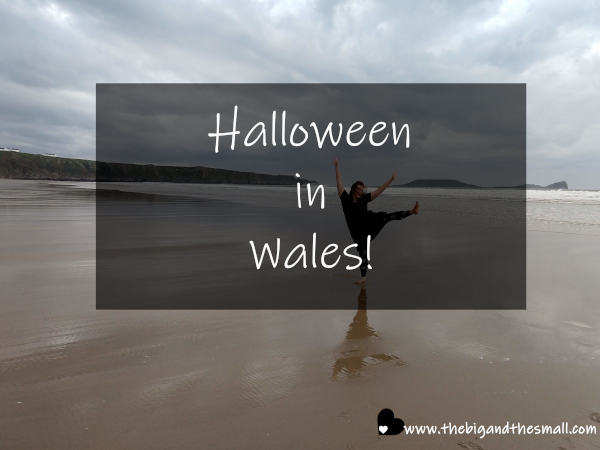 We had a list of 14 things happening in the area for Halloween - some sounded amazing, like an overnight in a supposedly haunted hotel - but that came with a hefty price tag. We decided to go with two events happening at National Trust sites so they were free or inexpensive. First up, Rhosilli Beach! We had been to Rhosilli point not long ago, but this event was actually down on the beach. I didn't quite read that closely enough before hand so I was wearing the wrong shoes and had to walk around barefoot on the beach and it was a little bit too cold for that. Getting down to the beach also meant a loooong walk down the hill (which of course meant a long walk back up at the end). 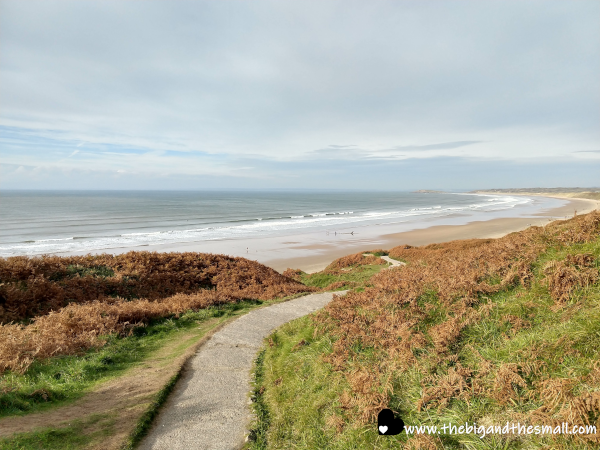 The actual event happening on the beach turned out to be very much geared towards children (who coulda guessed?) so we only checked it out briefly. They had buried some Halloween type items in the sand (skeletons, bats, eyeballs, etc) and created an archaeological grid so kids could dig the items up. (Note: I took a picture that didn't include kids, just the staff) 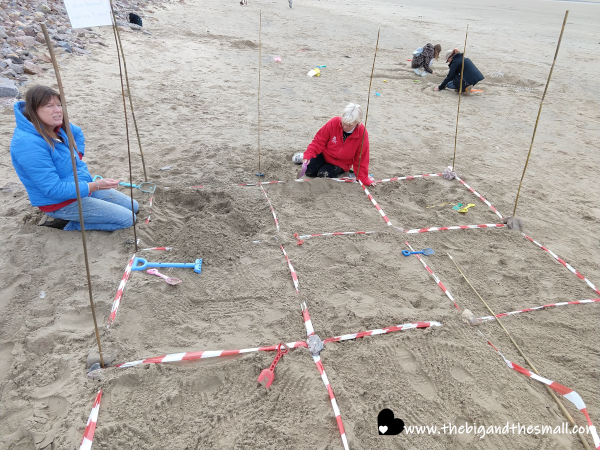 There were also some kids creating sea monsters in the sand! Some were unrecognizable, but this giant kraken was pretty darn good! 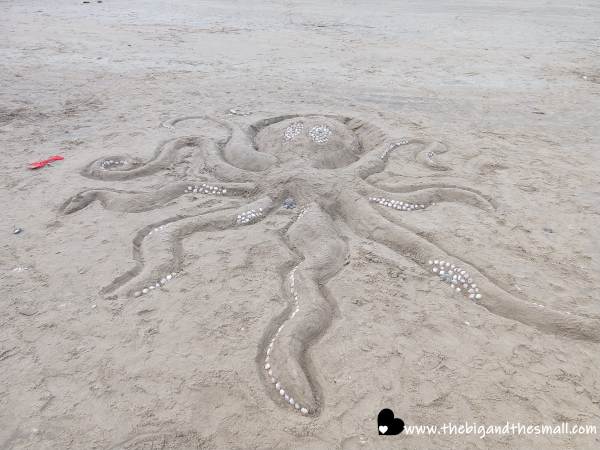 Since the official activities were a bit out of our age range, we decided to take a nice long walk on the beach. This particular beach has a shipwreck that is mostly buried. One of the National Trust staff members told us a bit about the history of the wreck. This particular one crashed on a dark and stormy night, but the surrounding towns people managed to come out and help save most of the crew. The following day they came back out and scavenged a whole bunch of the wood that had scattered from the wreck and the load it was carrying - legend has it many of the houses on the point are made with wood from this wreck! 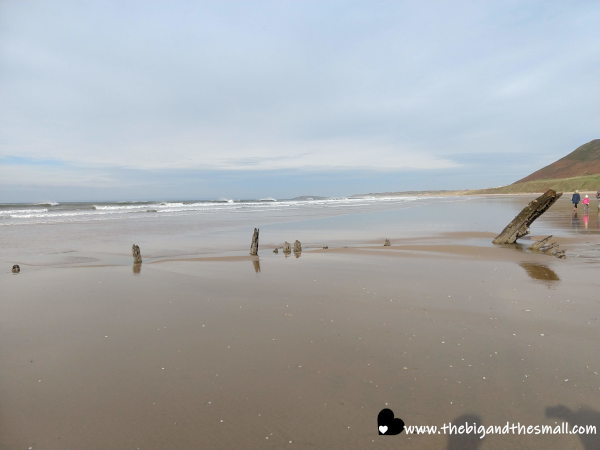 Depending on the tide levels the wreck sometimes shows more and is sometimes buried deeper. This is the only piece that was really sticking out the day we were there.

As we continued our journey down the beach we came across a washed up sea monster! Just kidding, it was a Jellyfish; but it was pretty cool/creepy and felt Halloween-ish. The creature was a soft blue color and really quite beautiful for, ya know, being a deadly stinging thing. Fun fact - in Welsh a Jellyfish is called a Pisgod Wibli-Wobli. I mean how awesome is that? (Steve is taking Welsh classes so he can tell us cool things like this). 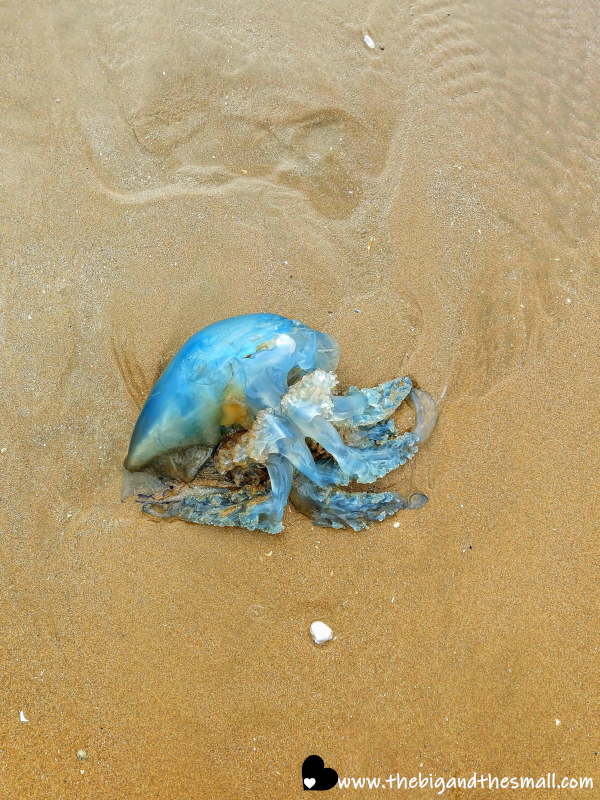 Since I was dressed up in my Halloween finery (aka black lipstick and unicorn skeleton leggings) we did a quick photoshoot on the beach. It ended with me all cold and wet when Joel insisted I walk out closer to the water and then all of a sudden a huge wave came in! 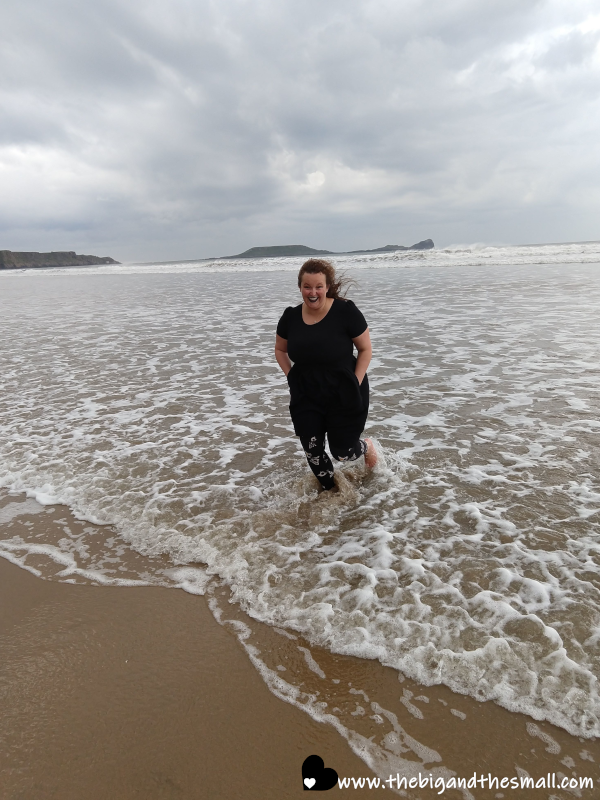 Also since Steve was with us, we managed to get a rare photo of Joel and I together! 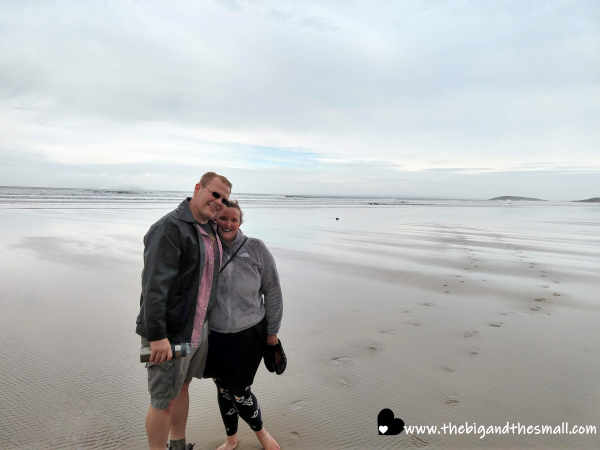 After a nice long walk on the beach we hiked back up to the parking lot for lunch - Steve packed us all a picnic lunch chock full of British delights! We got to try a whole assortment of things we have never tried before. There were three kinds of sandwiches - cheese and pickle (made with this Branston pickle stuff Brits love and I do not), egg and salad cream (like an egg salad but slightly different cuz it's not made with mayo), and cheese and Marmite (a yeast spread that is actually a byproduct of making beer. Steve says people either love it or hate it, I fell firmly in the hate it camp). 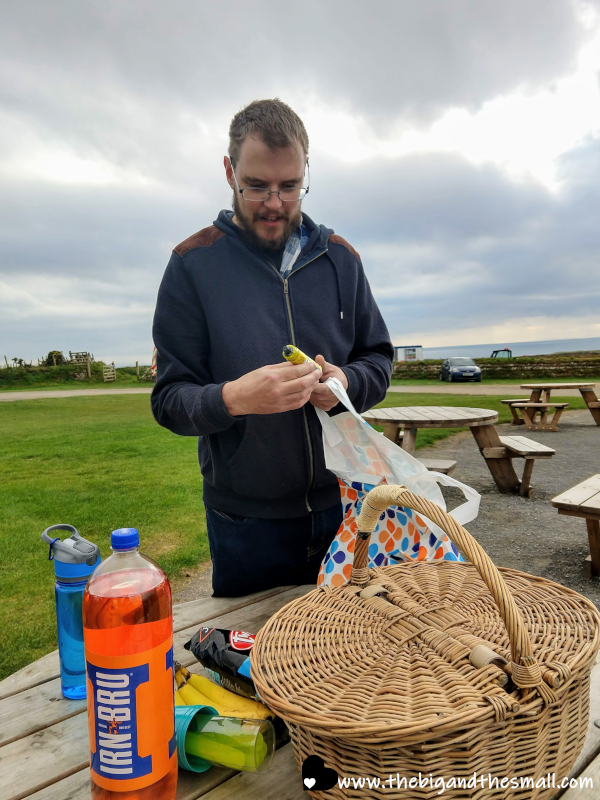 Other savory items included pork pies (like a pie but with a savory pork filling - YUM), mini scotch eggs (hardboiled eggs breaded and fried - tasty but I would have preferred them served hot although Steve said they are never served that way), and something called Twiglets. Steve made us try the Twiglets without telling us what they were first. They tasted kind of like the garlic bread things you find in Gardetto's, but with a burnt flavor. Turns out the flavor is Marmite! Steve said people always have a bowl of these out around the holidays although they almost never get eaten. 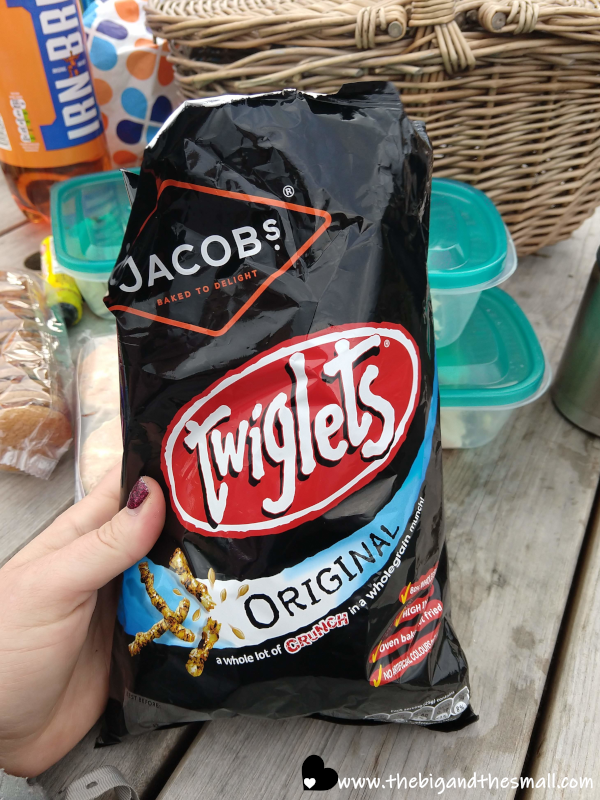 In addition to all that, Steve brought TONS of British sweets we've never tried before! Most of it was too sweet for me but Joel, of course, loved it all. We also got to try this crazy orange concoction called Irn Bru. It was like an extra sweet cream soda, too much for me but Joel guzzled it like water. You can see Steve also brought some bananas as a nod to being healthy but those never got touched. 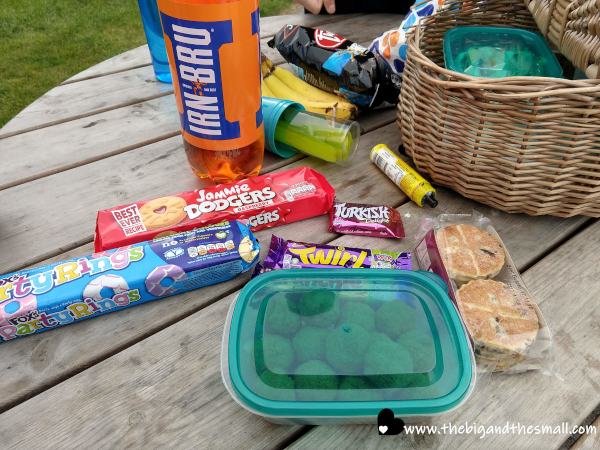 We all ate till we were full and then some, and we still had tons of food left. From there we packed up and headed back to our place to watch some scary movies! We spent the rest of the afternoon watching scary movies - we watched Netflix original Malevolent and an older scary movie called All the Boys Love Mandy Lane. Late in the evening I made homemade mac and cheese for dinner - which Steve had never had before!! Can you imagine never having mac and cheese? Crazy. Before our day was complete there was one activity left though - a Halloween event at another National Trust site - Aberdulais Falls. 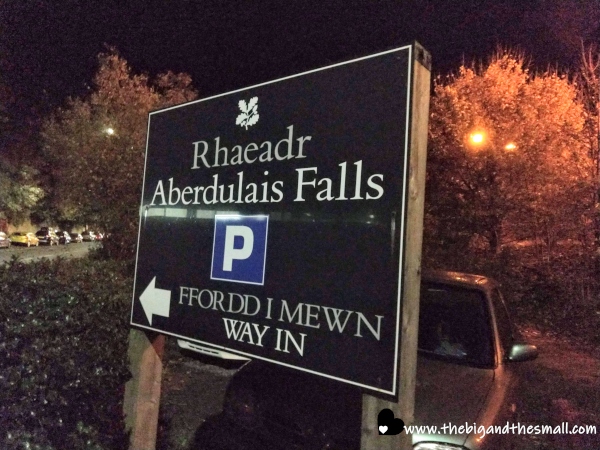 This place was awesome - like the beach the event was geared towards little kids, but this one was still suitably enjoyable for us. There were a dozen Halloween figures hidden around the site, and you had to go around with a flashlight, find them all, write down their names, and then return your paper to get a prize! The whole place was rather spooky - it's an old abandoned mine and there are building ruins all around. 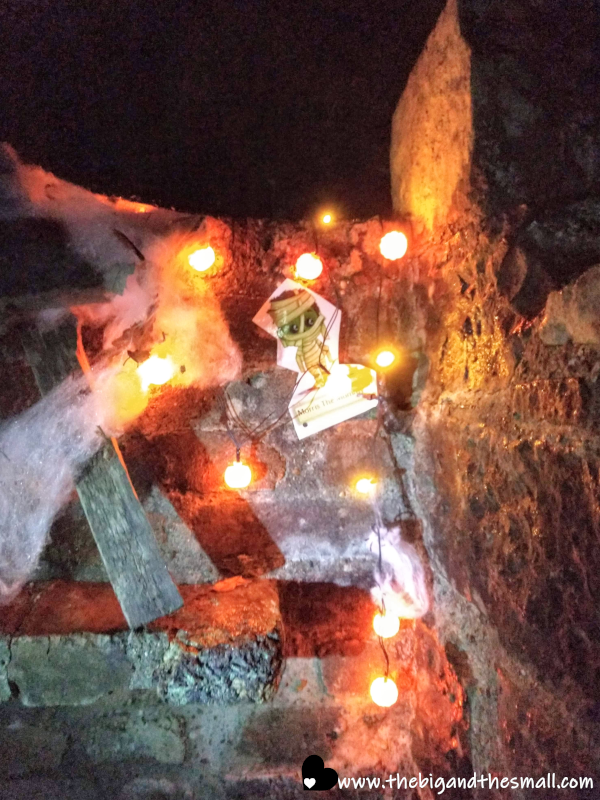 It actually would be a super cool place to do a scary haunted house - have zombie miners jump out of the shadows and all that. We did get a scare at one point, though I'm pretty sure it was unintentional. A lady dressed as a witch was standing in a dark corner, and when I saw her I screamed, making Steve scream, too. I think she was just waiting for her kid, but she got me. It started raining while we were there but it was still fun to explore the place, find the hidden figures, and see the falls. 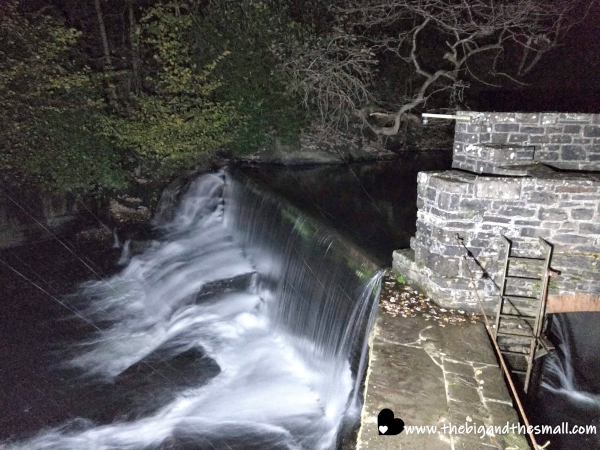 Plus at the end, I got a free pumpkin! It's rather small but I love it anyway, and I have a feeling it will make an appearance on our Thanksgiving table in a few weeks. Overall I had an amazing Halloween here in Wales - different than what I would experience back home but all fun nonetheless!

What did you do for Halloween this year? Any haunted houses or scary movies? Do you go all out for the holiday or hide out till it's over? I'd love to hear from ya!