I know I just talked about Kidwelly Castle last week, but I hope you all never get tired of castle posts because I don't think I'll ever tire of going to them! The most recent one we visited was Caerphilly Castle; we just happened to go the Saturday before Halloween, and it turns out the castle had some Halloween celebrations going on - you can imagine how excited I was about that! 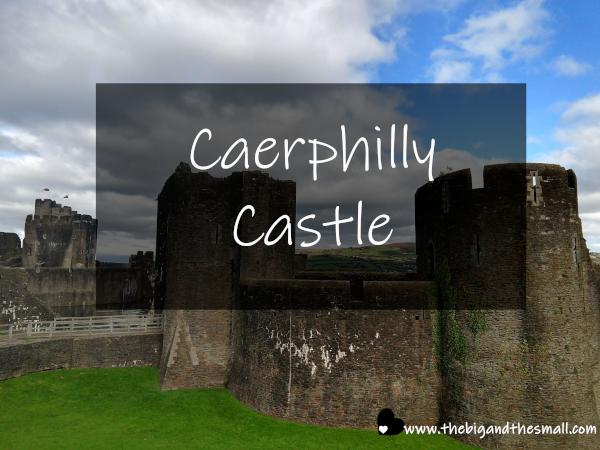 Caerphilly Castle is not quite as old as Kidwelly, having been built in 1268 rather than the early 1100's. Which means it's only 750 years old. I mean, practically a baby. The location of Caerphilly Castle is amazing - it is right in the middle of the town of Caerphilly which is a thriving, modern town. Like, across the street from the castle are shoe shops and grocery stores, like it's the most normal thing in the world to have a castle in the middle of town. A castle still surrounded by a moat no less! 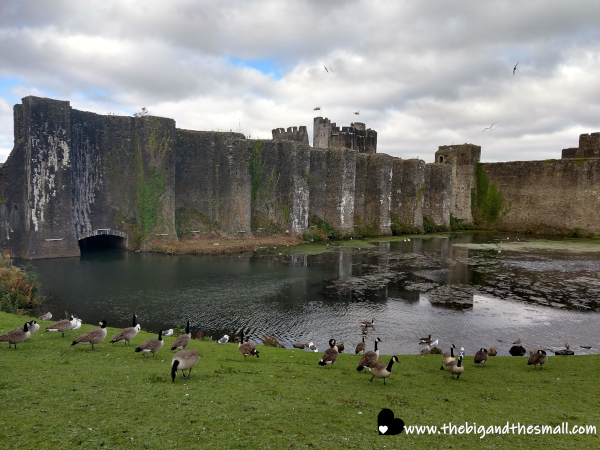 Entering a castle with a still functional moat was pretty darn cool. You can imagine how intimidating it would have been to try and attack a place like this back in the day. Castles made incredible fortresses and you had to be pretty gutsy to try and take one down. 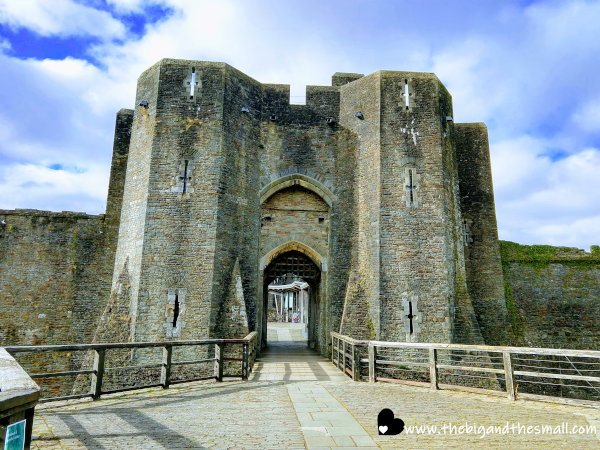 Shortly after getting inside we realized this was no ordinary weekend at the castle. People were dressed up in medieval costumes and reenacting scenes that would have taken place hundreds of years ago. The first one we came across was the executioner! So of course we had to throw Joel in the stocks and let the guy go at him. Bye, honey! You should have followed the rules! 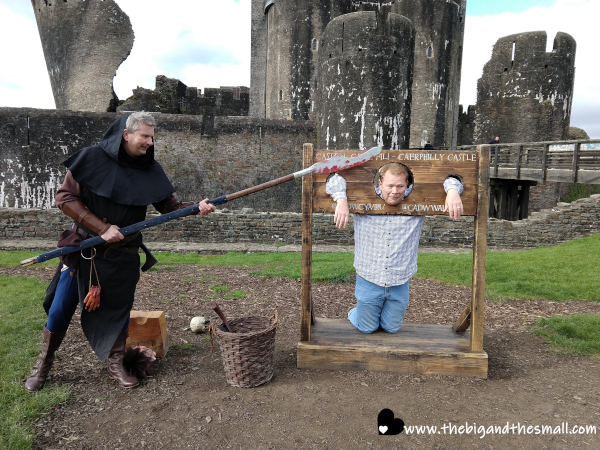 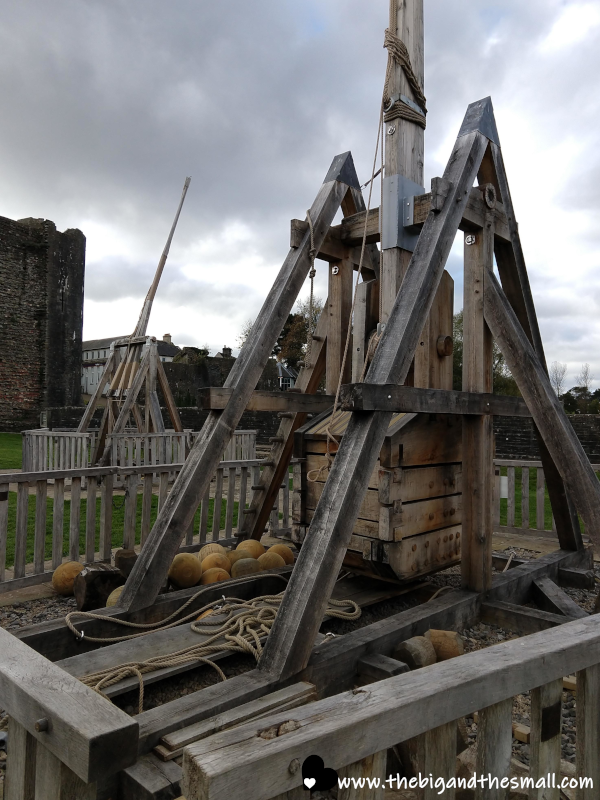 It turns out that even without Halloween celebrations this castle is a bit cheesier than other ones we have been to - they have a dragon display all the time! As you walk up there is a loudspeaker telling the legend of the dragon of Caerphilly. I only heard part of the story but it involves a king who came across a dragon's egg when he was starving, so he ate the egg which then turned him into a dragon! Apparently he was a fairly benevolent dragon who lived at the castle and protected and defended the people in the town of Caerphilly. The display features huge dragon statues, a light display, and smoke even comes out of the biggest dragon's mouth! 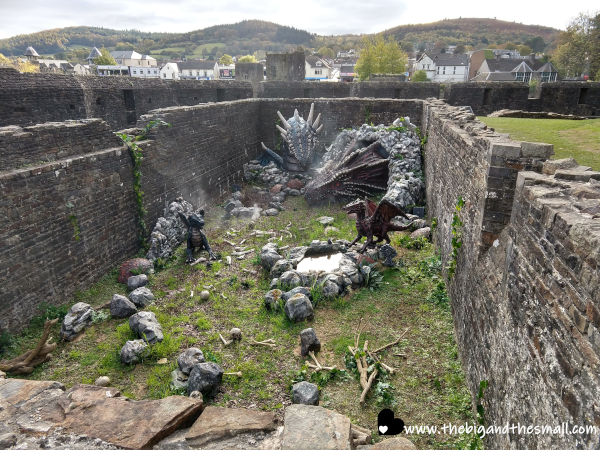 From there we were able to go see the famous leaning tower of Caerphilly Castle. The tower started to lean in the 17th century, and while restorations took place on the castle in the 19th and 20th centuries, they simply stabilized the tower, without returning it to its original state. At some point a two story statue was added that looks like a soldier trying to hold the castle upright. 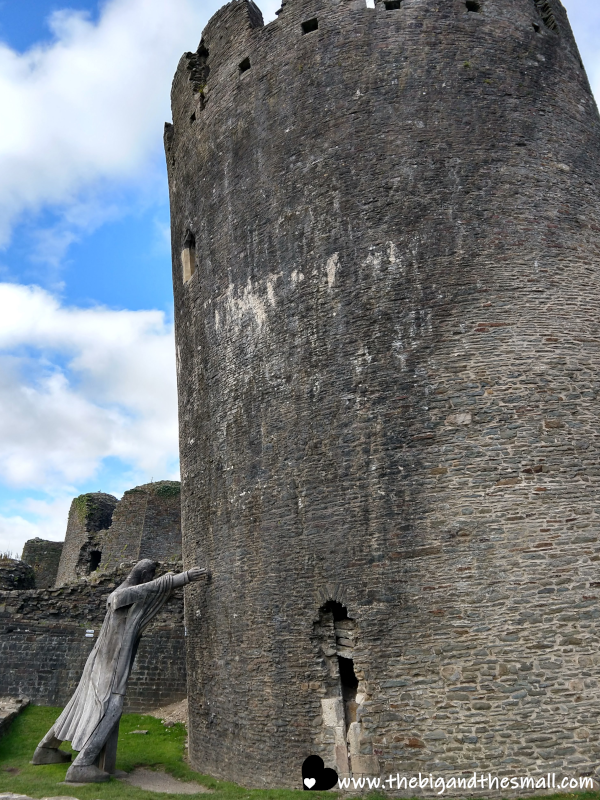 This castle was by far the largest one we have been to so we took a lot of time exploring rooms, going up and down windy staircases, and just generally getting lost. We did discover how the bathrooms worked back then! The "toilet" is basically a seat over a hole (like you might find in a porta-potty) but can you guess where that hole leads? Go on, guess! That's right, the moat! The toilet seat hovered you right over the moat! Which means the moat was really extra defensive, not only was it water you had to cross to get into the castle it was, well, the most disgusting 'water' you can imagine. 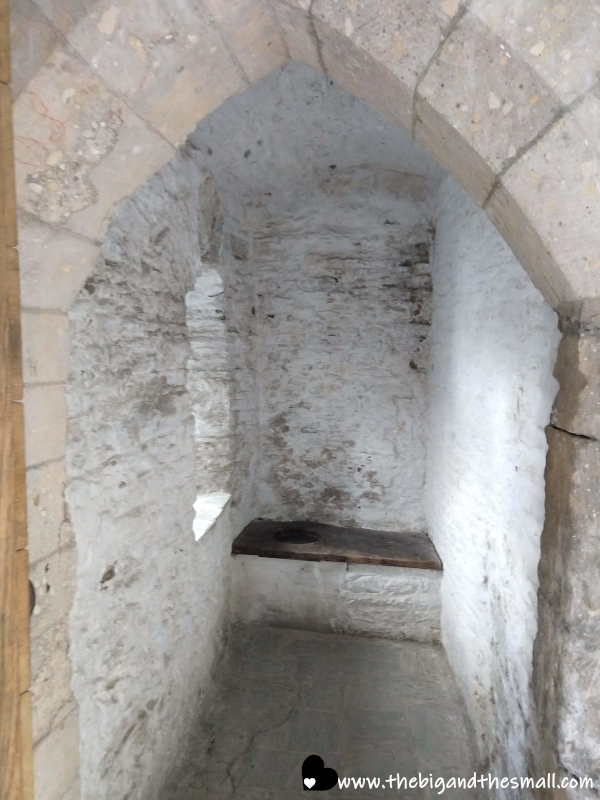 As we wandered one of the upper halls I happened to glance through a window that peeked down into the great hall. Here is when I got really excited because I had finally found the center of the Halloween shenanigans! We immediately scurried down below to see if we could get in on any of the action. 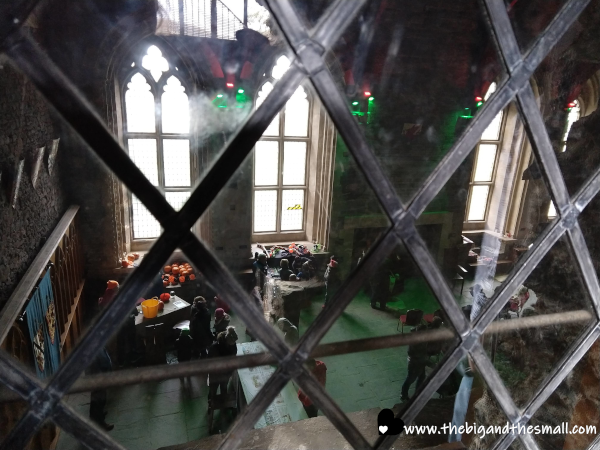 It was magical. The whole place was lit up in Halloween colors and there were so many activities going on - face painting, pumpkin carving, dress up, story telling, crafting, and more! Granted, it was mostly geared towards small children, but I am nothing if not a child at heart when it comes to Halloween. (P.S. can you spot the skeleton in the next picutre?) 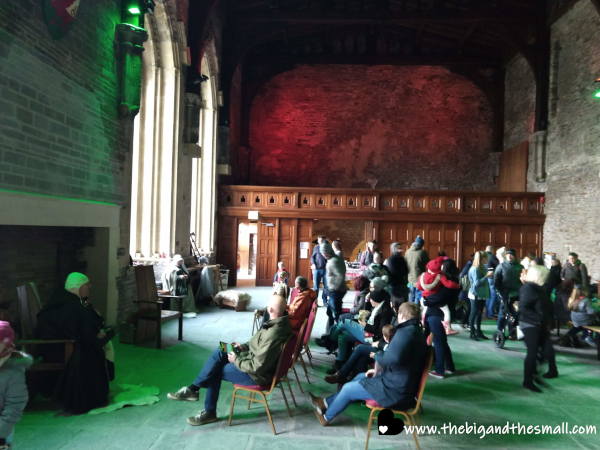 As soon as we entered a volunteer whose station was empty offered to let us partake - it was the dress like a medieval Lord and Lady station! Um, yes please! It took a surprisingly long time to put on the long dress with crazy long sleeves, belt, and several layers of headdress. Joel kept telling me to look serious for pictures but I could not stop grinning ear to ear. Then Joel got dressed up as well! Our friend Steve was with us so he acted as the paparazzi and took some pictures of us gallivanting around the great hall in our get-ups. 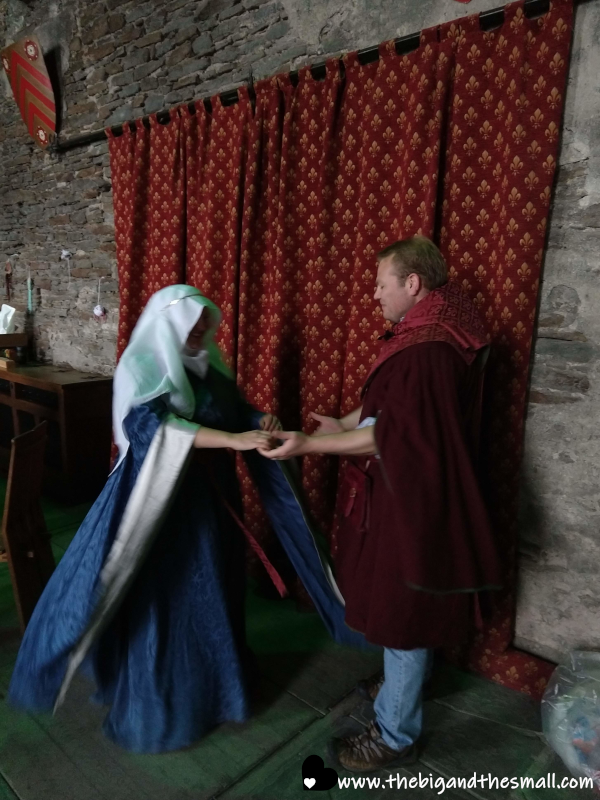 After returning our costumes we explored the rest of the great hall before going outside once again to search for a place several volunteers had told us about - a Halloween maze! I mean, could this day get any better? (Read that in your best Chandler Bing voice, please). It felt like were were going through a maze just to find the maze but eventually we found it. 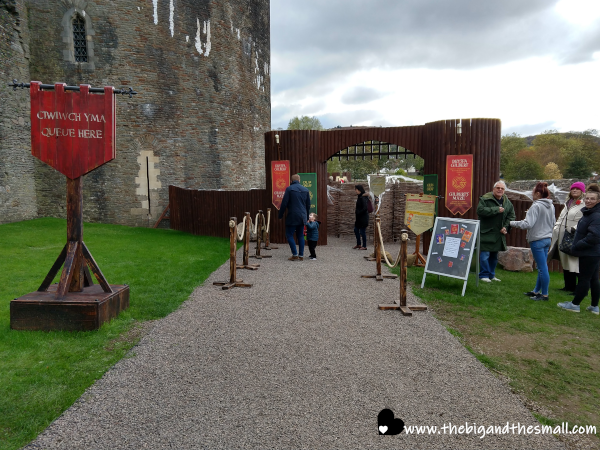 Honestly, it was everything I never knew I wanted in a castle visit. There were fake cobwebs everywhere and every twist and turn had cheesy fun decorations like this. 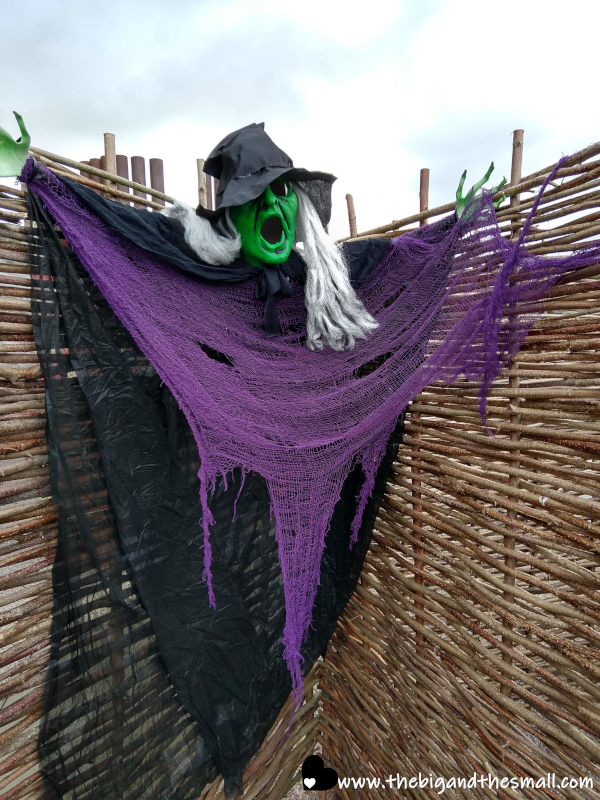 At one point I was attacked by a small, sword wielding child. (Don't worry, I surrendered and survived!) 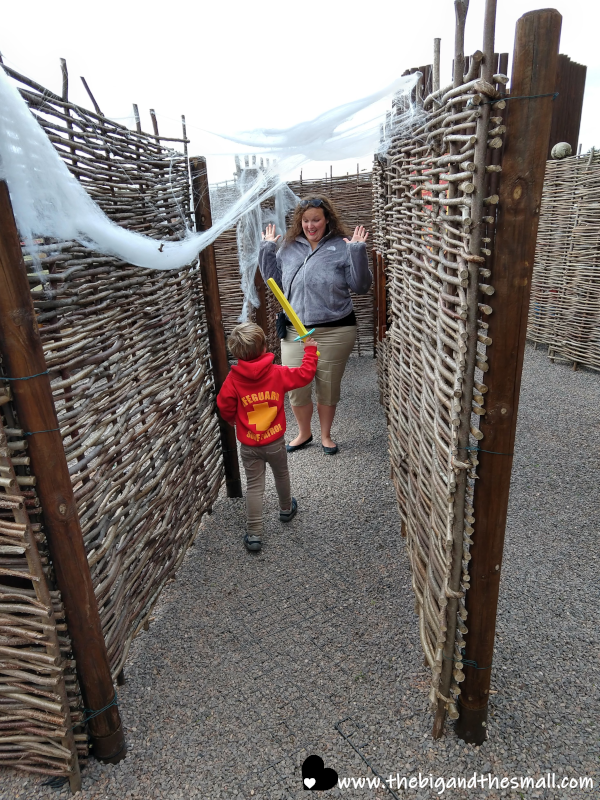 Eventually we made it to the center of the maze where Joel and I were crowned the new King and Queen of the castle! 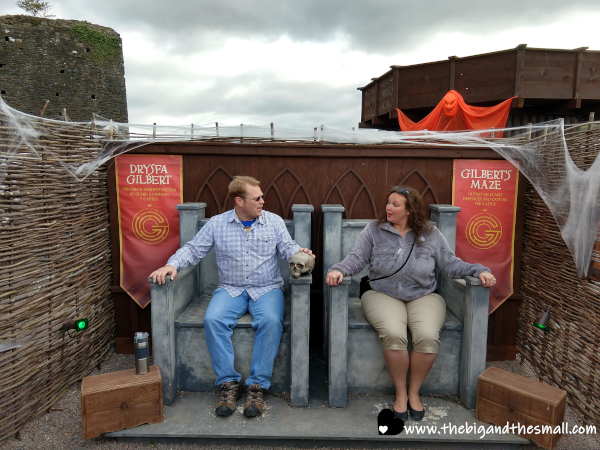 Our friend Steve who was with us wasn't quite so lucky, he was undead by the time he made it to the center! 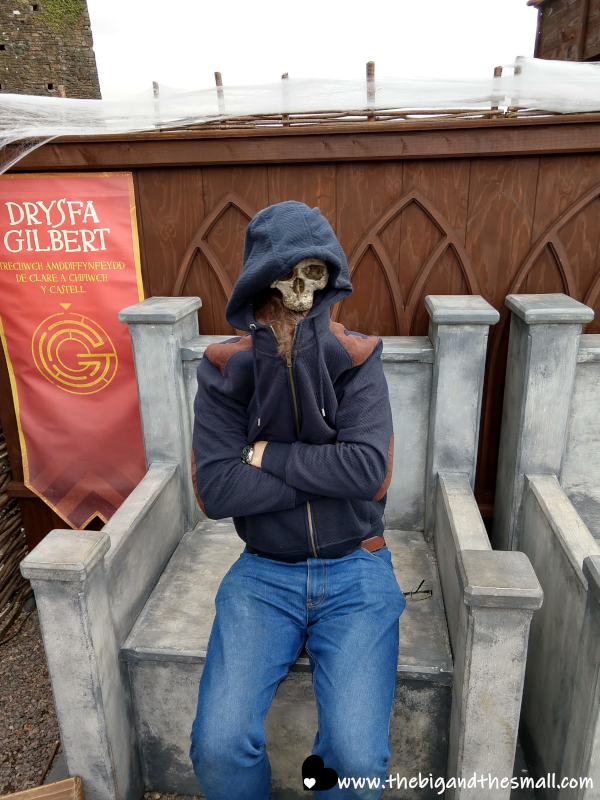 It's hard to describe how much fun it was to run through a Halloween themed maze in a castle in Wales. It's definitely not something I ever thought I'd do but I am so glad I got the opportunity. Thanks to our friend Steve for driving and going with us on this adventure; we wouldn't have been there without him! 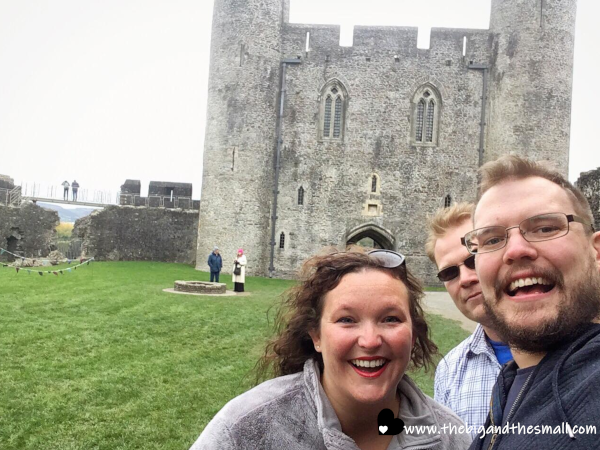 Have you ever gone somewhere and stumbled on some extra celebrations? How do you feel about Halloween? Do you love it as much as I do? (That's a trick question, no one loves it as much as I do). Tell me in the comments below!