After our visit to Kidwelly Castle, Margi, Joel and I found ourselves hungry. Turns out walking around a castle for a couple hours really takes it out of you! Margi offered to take us to a nearby restaurant she had tried the other day, and when she first said the name I thought she was saying "Fairy Cabin." Turns out it was Ferry Cabin, so, not quite as cool as fairies, but it was pretty cool anyway. 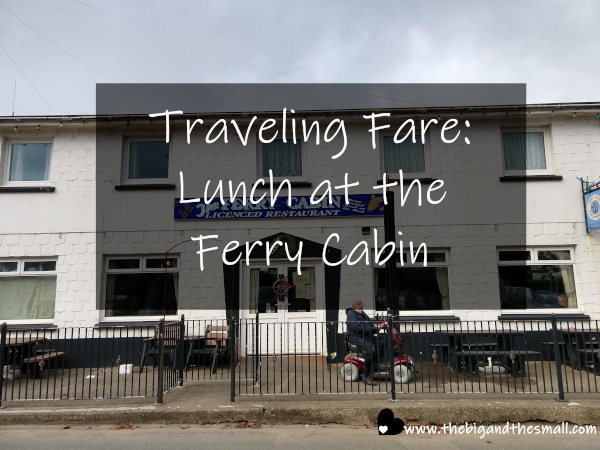 The restaurant reminded me of a little diner or cafe you might find in a small American town. It was quiet and unassuming, yet with an air of coziness and friendliness. The decor was simple with vinyl tablecloths, a wood planked ceiling, and funny/kitschy signs everywhere. My favorite one said "Eat less, work out more, don't drink, die anyway." 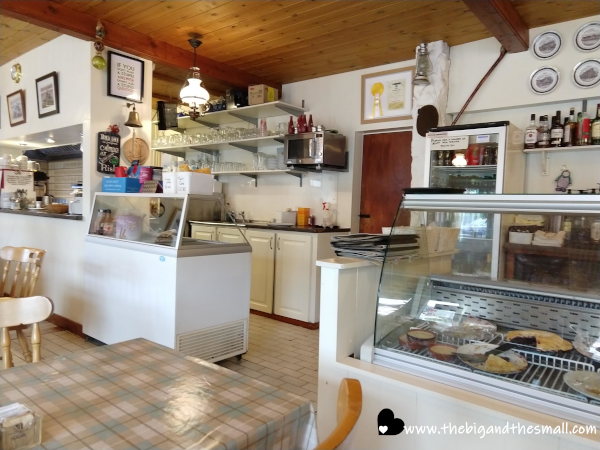 One wall was decorated with a hand painted mural of the view outside the restaurant - including another castle in the distance! (Not, in fact, the one we went to. I'm telling you, you can't swing a stick without hitting a castle around here). The angle of my photo is a bit weird as I was trying to avoid getting strangers' faces in it, but here is a picture of the mural. 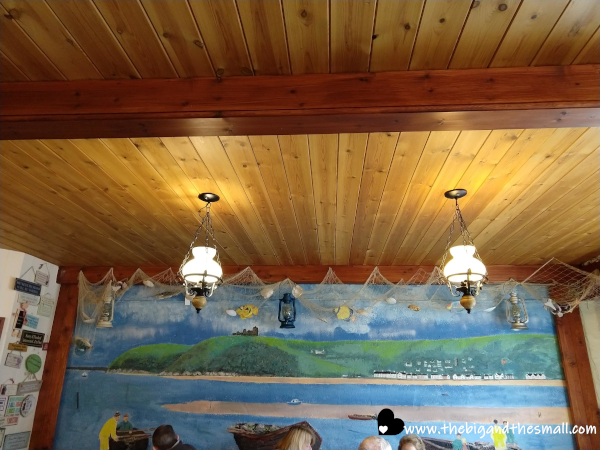 While we were driving to the place Joel couldn't resist looking it up on Google, and he saw in the pictures with reviews that they served drinks in a really cool way. We are usually "water only" people at restaurants, but this time we ordered a hot chocolate. I am so glad we did for two reasons - one, it was indeed served in a cool way (they make an anchor out of cocoa powder!) and two, it is the best hot chocolate I have ever had. It literally tasted like a melted candy bar, it was so, so, good. I'm not usually big on sweets either but this was one crazy amazing hot chocolate. 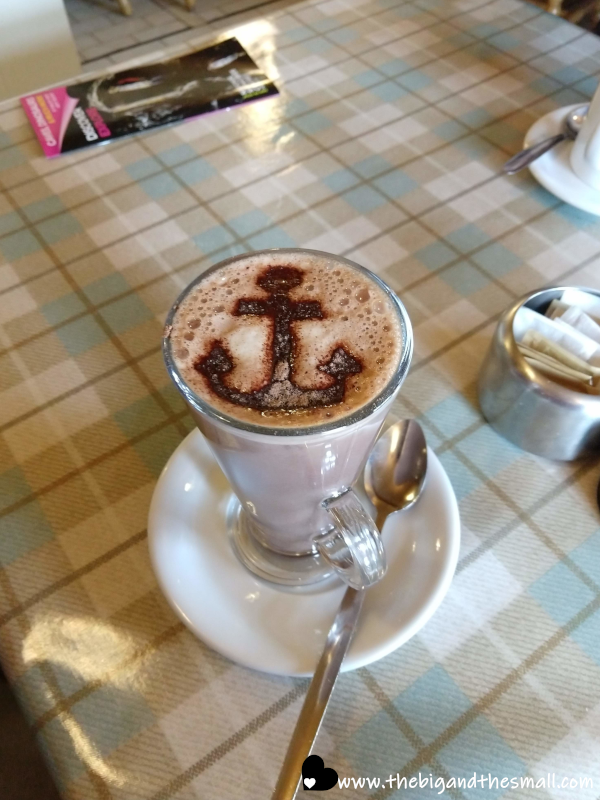 For food, Joel went with the classic British fish and chips, served with peas. A true British classic comes with mushy peas but for some reason this place charged extra for the mushy kind. Joel liked the fish well enough, but the tartar sauce it came with had too much horseradish for him. I, on the other hand, loved the tartar sauce, but I don't really care for fish in general so it was "meh" to me. The chips were oddly dry; they had like no grease on them, which I suppose is good if you are trying to be healthy, but really makes for a strange texture and flavor. Overall I'd say his meal was just "okay". 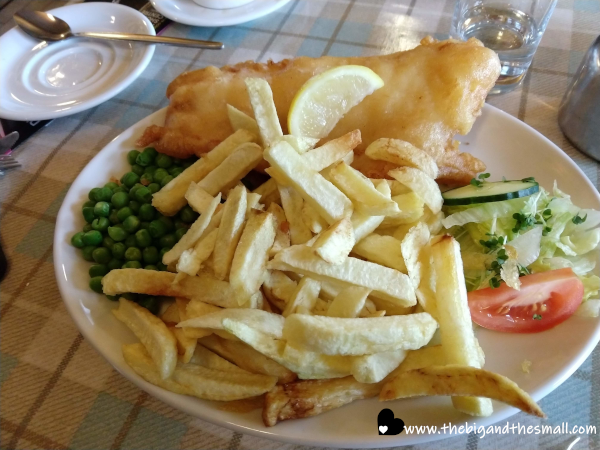 Mine, however, was fantastic. Well, the sides were just okay - it was peas and instead of chips I went with what they call here a "jacket potato" which is fancy British speak for a baked potato. My main dish was the "steak and stilton pie", described on the menu as "prime beef slow cooked with stilton [blue cheese] and merlot wine, with a puff pastry top". One of my favorite food combinations ever is steak and blue cheese, and this was basically that soaked in gravy with a puff pastry crust on top? Yes, please! It was incredible. Joel and I usually share meals at restaurants so we can both try things but he only got one bite of this because I loved it too much, I just couldn't bring myself to share! 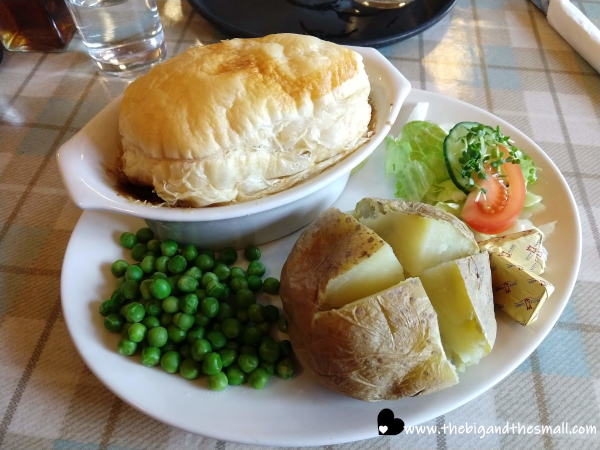 I'm sure I'll never make it back to that restaurant (why would I with so many other things to try?!) but that hurts a little bit because I'm also sure I could eat that steak and stilton pie every day for a month and not get sick of it. Perhaps I should look up a recipe and try to make one myself... but that seems like a lot of work. Have you ever fallen in love with a meal at a restaurant and then tried to make it at home? I used to do that with all the soups from the Olive Garden's soup and salad lunch - sometimes the version I made turned out even better!

All in all we had an amazing day going to the castle and having lunch with our friend Margi, even if overall the food was mostly just okay. Often times it more about the company you are with anyway!