Ever since we arrived in Wales and missed out on going to the local castle (closed for the season) Joel and I have been itching to go inside a true Welsh castle. Luckily last week our friend Margi took us on a trip to a surprise destination... and it turned out to be Kidwelly Castle! 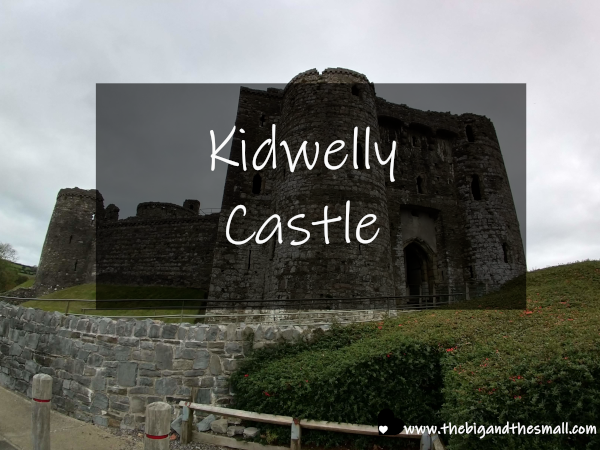 We were so excited when we realized where Margi was taking us, and we are so grateful for her generosity! She had stumbled across the castle a few days previously when she was out on her own, and after touring the castle herself she decided she needed to bring us back with her. Walking up to the castle was an incredible feeling - I love imagining what it must have been like to live and work here so many centuries ago. 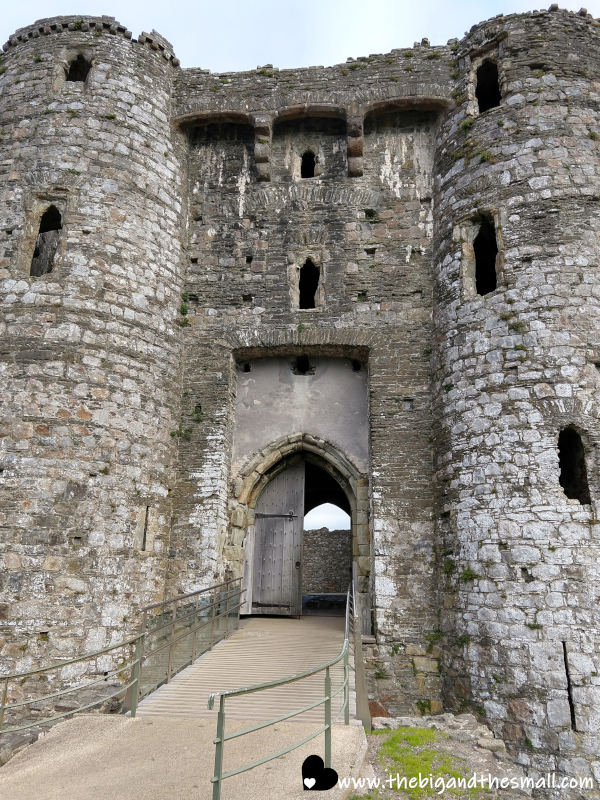 There was so much castle to explore it took us a long time. Just inside the entrance were stairs down into some cellar like caverns. They would have been a place to store treasure or extra weapons and defenses. The next rooms open were ones where the guards would have lived and slept. They were huge rooms with windows on to the town and huge fireplaces - in many place you could still see where soot stained the stone. 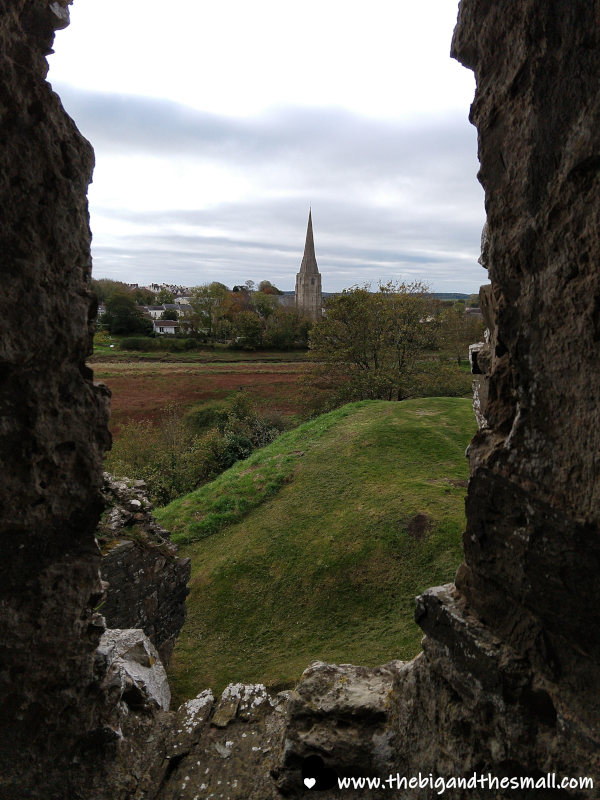 One of the best rooms in the castle was set up to tell visitors all about the history of the castle. There was even a small scale model of what the castle would have looked like in its prime. 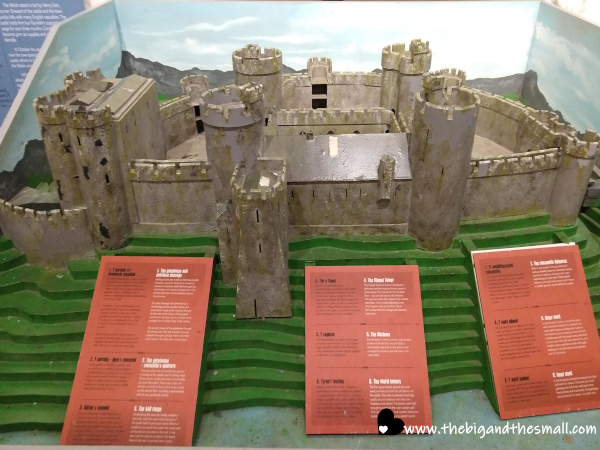 Also on display was armor that would have been worn by people defending the castle - chain mail shirts and gloves, as well as metal helmets that looked like a tin can with slits cut out for eyes. I can't imagine how hard it would have been to go into battle with this kind of armor - it is so heavy! It would take more strength than I have to wear it, let alone wear it and bear any kind of weapon and be able to fight. 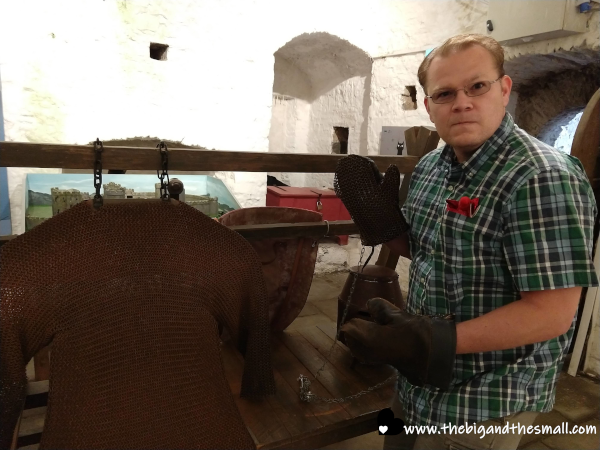 We learned Kidwelly Castle was built in the 1100's and stood as a fortress for the town of Kidwelly for a long time. It sits in ruins now thanks to disrepair and neglect for many centuries, but when it was fully functioning as a castle it was never once taken in battle. It was a great stronghold for the people of the town and helped them withstand many an assault! 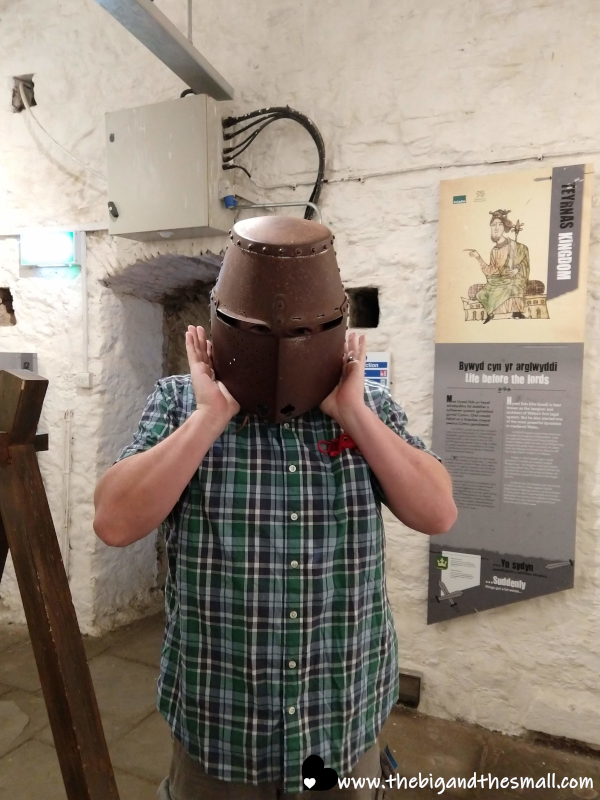 These days National Trust in Wales does work to restore many castles - or at the very least keep them from falling into further disrepair. However, the skills it takes to do this work seems to be a dying art. While we were they we got to talking to one of the stonemasons working to restores some parts of this castle. He is in his late 60's and nearing retirement; personally I'm impressed he's done it this long, it is hard physical labor! He said when he started there were 122 people who did this work in the whole of the UK, now there are only 23. 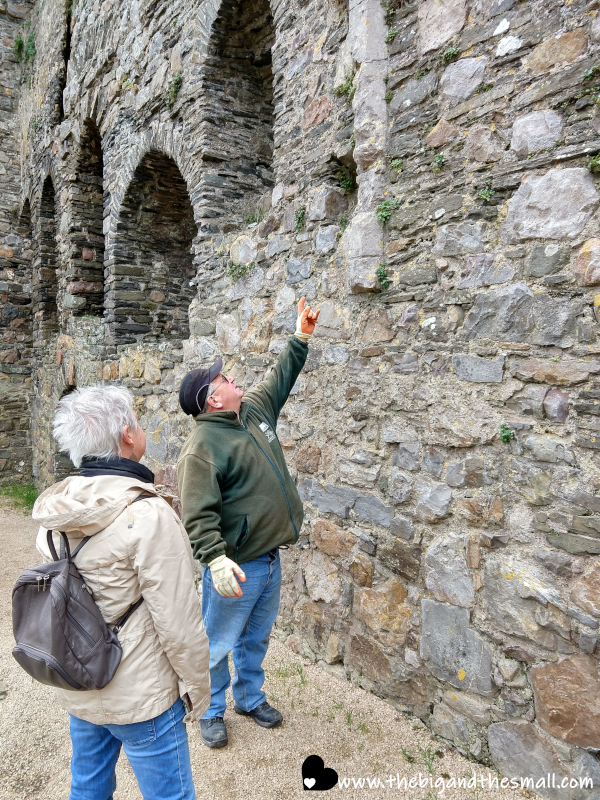 You can see from the next picture that there is a lot of work to be done. In many parts they carefully take out each stone, clean it, then when all are done, put a piece of the castle back together exactly how it was. What a painstaking amount of work and attention to detail this requires! Plus they are pretty much always fighting a losing battle - the ravages of time and weather take a toll faster than they can work. 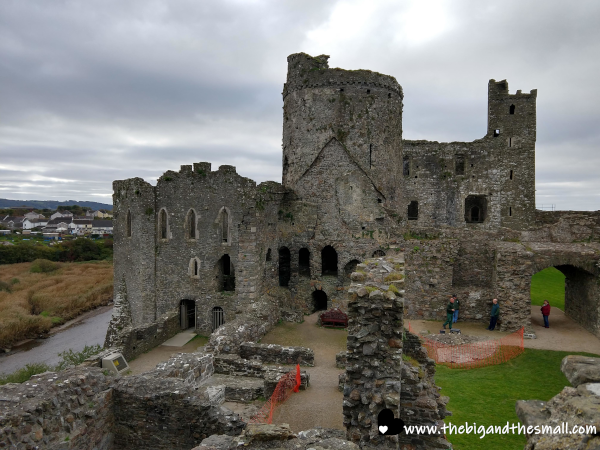 Nevertheless, the castle is still a sight to behold. One of my favorite parts of the castle was the Chapel tower - that's right, of the four towers one was fully dedicated to being a chapel and housing the chaplain! This stands out because the windows are different - more similar to what you might find in an old church or cathedral than the fortress part of the castle. One small room was labeled as the sacristy, where the chaplain would have prepared parts of worship and the elements for communion. I loved standing in that space and imagining what it would have been like to lead or attend worship in such a space. 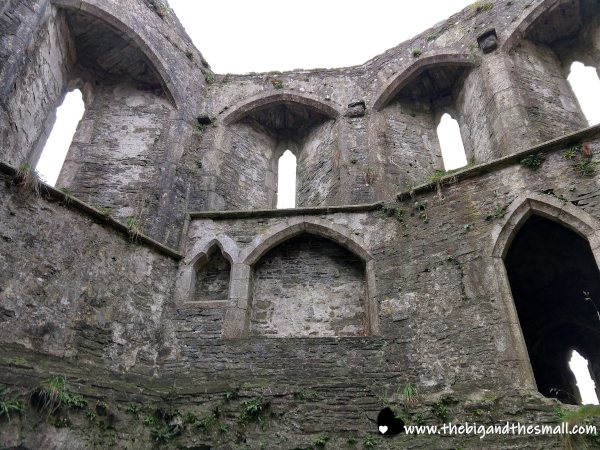 My absolute favorite part of the castle was climbing as high as we were allowed to so we could get the best possible view. Some stairways were blocked off for safety concerns, but we finally found one that just kept winding up and up and up! When we finally reached the top it was worth the climb. When we looked back down the other people were tiny! 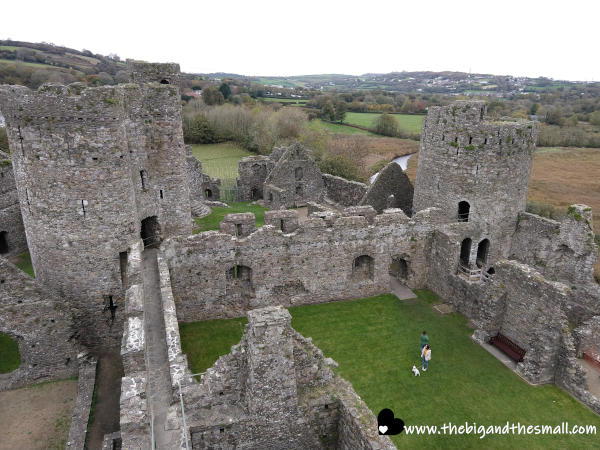 I took a ton of pictures of the view and then later Google photos helpfully put them together into a panoramic picture for me. Thanks, Google!

When we were up high, Margi was still down below, so she took this photo of us from the ground! 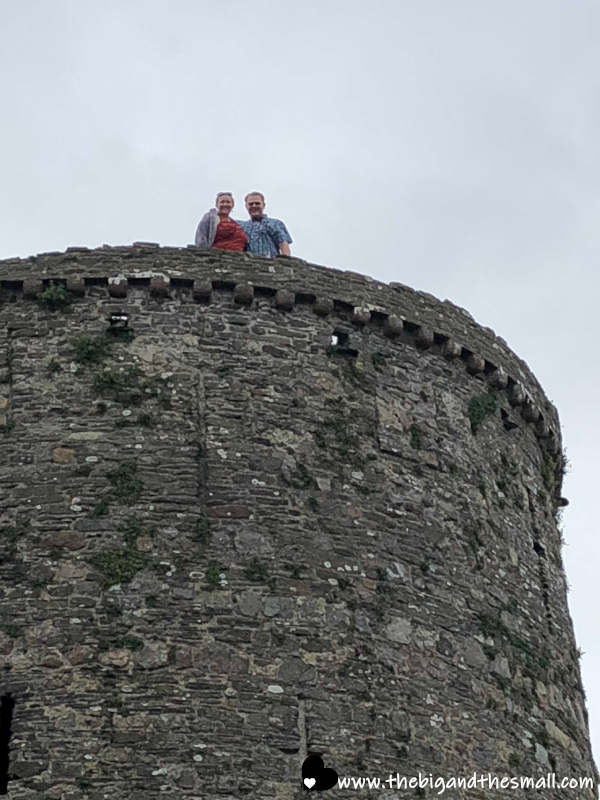 On our way back down from the highest point, we found a small room that had a brightly colored huge chair in it! It seems like some kind of throne... though definitely not old enough to have been original to the castle. I'm not sure what the story is here, but Joel couldn't resist the opportunity to pose like a king. 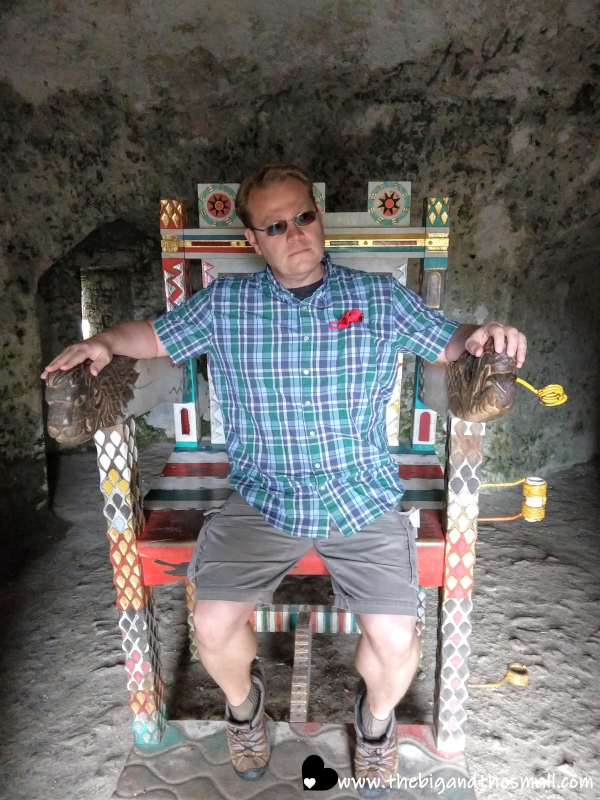 Of all the stories of battles, losses and triumphs at the castle my favorite was the story of a Welsh princess. Here is what one of the information plaques shared about her:  "Gwenllian was a princess by birth and marriage. Her husband, Gruffudd ap Rhys, was a prince of Deheubarth; her father, Gruffudd ap Cynan, Prince of Gwynedd. [Please don't ask me how to pronounce any of that]. King Henry I died in 1135. With no heir, England was left in turmoil. Sensing the chance to win back lands, the Welsh launched a campaign against Anglo Norman rule. Gruffudd travelled to Gwynedd to gather support. With her husband away, Gwenllian led her doomed army against a Norman attack. The battle took place nearby the castle, and despite her bravery Gwenllian was captured and beheaded." This carved stone stands outside the castle as a monument to her legacy. 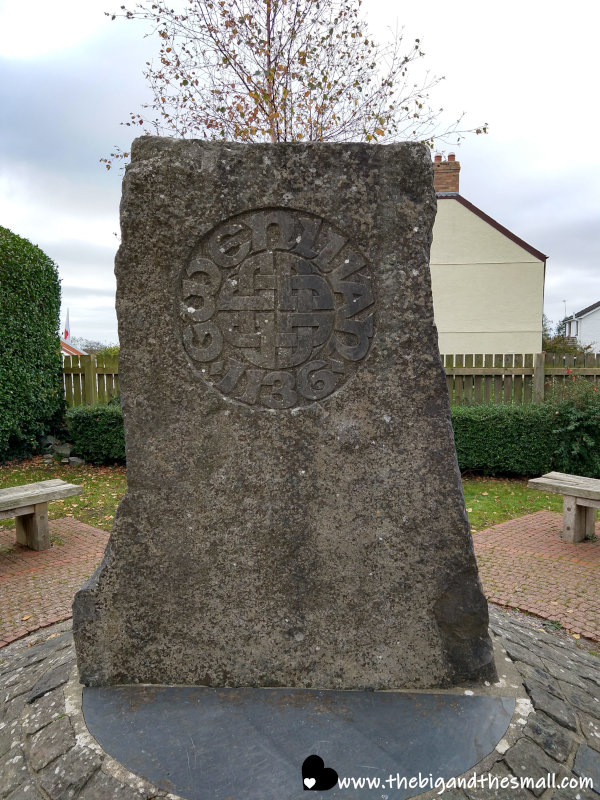 Our day at Kidwelly Castle was filled with exciting exploration, learning more about Welsh history, and lots and lots of walking. It was an incredible visit that both satisfied our desire to see a castle, and left us wanting more! Have you ever been to a castle before? If not, do you want to? If so, do you want to see more? Or is it more like, "seen one castle, seen them all" for you? Sound off below!

So cool!  I love to read books from that era.  I enjoy non fiction best though as the truth is more exciting yet horrifying, than someone could make up!

The truth is often crazier than the fiction! Do you have any specific books to recommend about this era? I'd love to read some!