A Walk Along the Byes

On our first full day in England, one of the activities on the itinerary was a group walk along the Byes. I wasn't sure exactly what that meant but I'm always trying to get my two miles a day in and some company on my walk sounded nice! 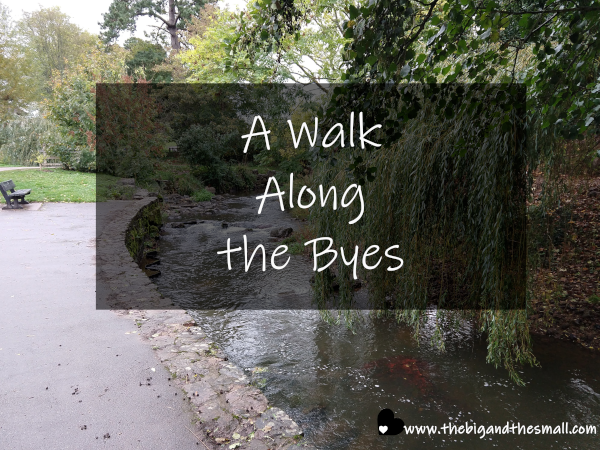 We gathered in front of the hotel while everyone assembled, and then we set off on a walk. None of us really knew where we were going except for Andy. He was decked out in hiking gear and had a map in a waterproof case slung around his neck. Apparently on past church walks things have gotten a little hairy... getting lost, going farther than originally planned, etc., so it seemed this time Andy was determined to keep us on track. We were headed for a church in the nearby town of Sidford, and he had confirmed with the front desk at the hotel that it was only a mile away. And so about 16 of us set off! 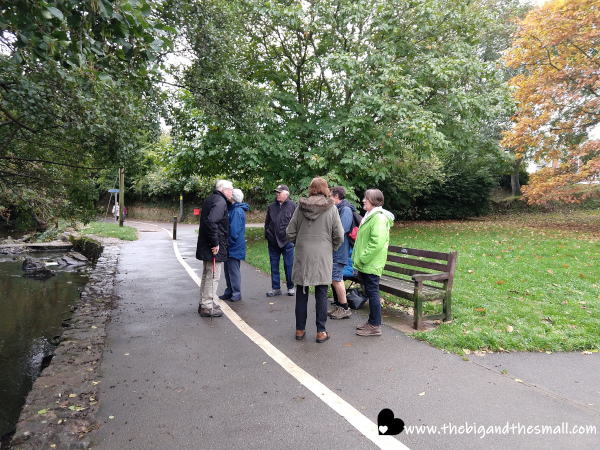 Since the majority of the group was older we walked at a fairly slow pace, which I, for one, enjoyed. I'm used to walking with Joel who is both naturally taller and faster than I, so half the time I feel like I have to jog to keep up with him. It was nice to be the fast one in the group for once! Throughout the walk I paired up with different people at different times, and as we ambled along we chatted amiably about anything and everything. Many people wanted to know my story - what Joel and I are doing in Wales, why we left the U.S., plans for the future (I don't know!) and more. I enjoyed chatting with everyone and often tried to turn the conversation to hearing more about them as well.

There were gorgeous views along the way. Alongside this creek with rushing water we all paused for a while so our group could coalesce once more; we had spread out across about a quarter of a mile as everyone walked at a different pace. Several people asked Andy how far along we were, was it really only a mile total to our destination? When he started to be uncertain a few people turned back to the hotel, not wanting to risk getting further out than they could walk back. The rest of us soldiered on. 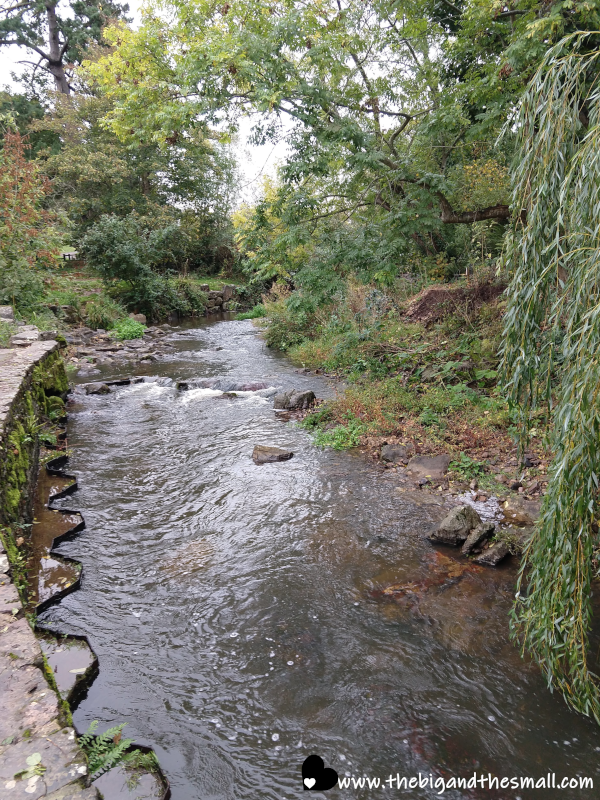 The trail we followed was at times heavily populated with dog walkers, bikers, and, on our way back, tons of school aged children in uniforms. Unlike many walking paths back home that go largely unused (especially once summer is over) this one was clearly an important part of the community. The views changed from parks to creeks to gorgeous pasture and countryside as we kept moving along. It honestly was starting to feel like Andy was way off in his estimate of how far we were going. I started to regret not having set my Runkeeper at the beginning of the walk to track our distance. 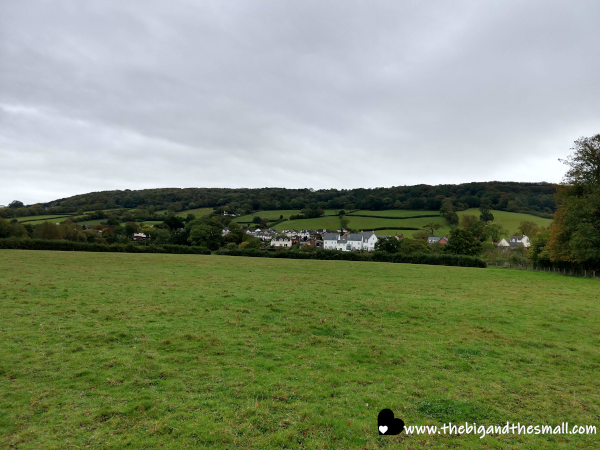 Eventually we did reach the end point Andy had in mind - St. Peter's church in Sidford. It was a gloomy day but the church was cheerfully decorated for their recent Harvest celebration (different churches celebrate it at different times). We weren't entirely sure we could get to go inside but lo and behold the doors were unlocked! [Side note: this is very different from my experience with most churches, especially small town churches, in the States. The whole time we were inside we didn't see a single soul who worked there or was in charge, and yet the building was wide open for anyone to wander in. Back home, most churches are locked up tight unless someone is there to keep an eye on things or an event is happening.] 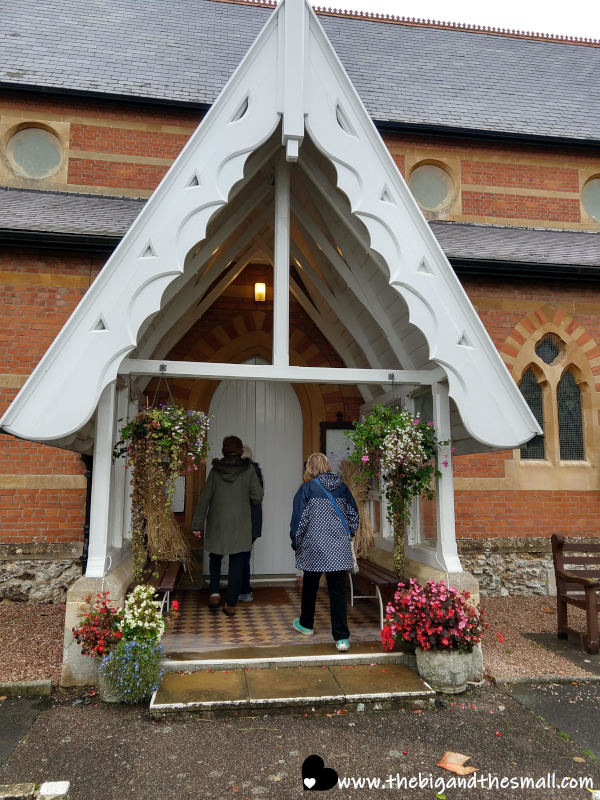 This church was built in the 1860's and is a part of the Church of England. It was beautiful inside, with large archways and gorgeous stained glass windows. I enjoyed walking around and reading some of the literature about the life and history of the church, as well as just admiring the beauty of the place. 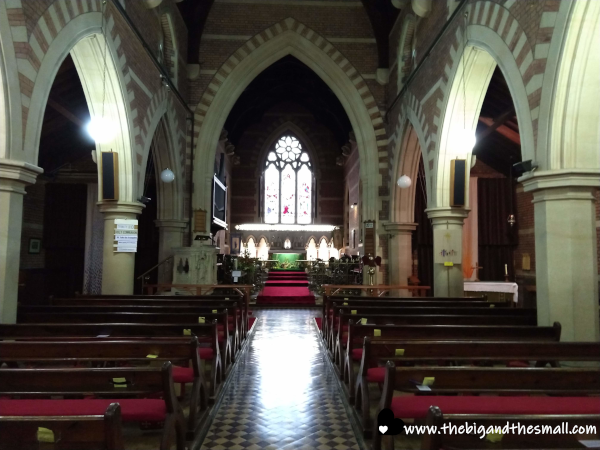 My eye was especially caught by this golden eagle. I've never seen such a statue in a church before, and it didn't have any identifying markers or plaques around it to indicate its importance. I wish I could know the story behind it. 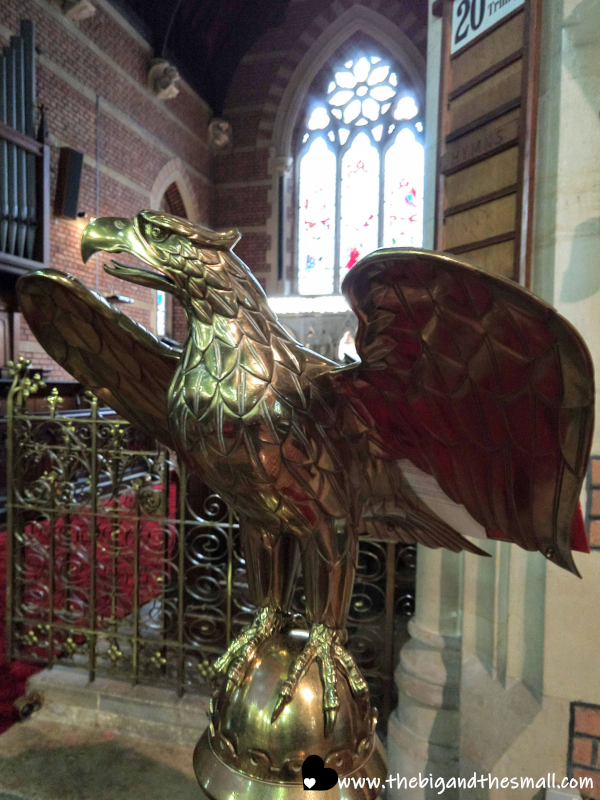 After about ten minutes exploring the church, we all gathered back outside for the return trek to the hotel. This time I did pull up my app so I could check on the distance we walked. Though it felt much longer than one mile, it turns out Andy wasn't too far off - it was exactly 1.5 miles from the doorstep of the church to the doorstep of the hotel. All in all it was a beautiful walk and I'm glad I was able to get some good exercise with some even better company!