When we went to Oystermouth Castle last week we also ate lunch at a local pub. The White Rose is a local place known for great deals and since we are on a budget knew it would be a great place for us to check out. 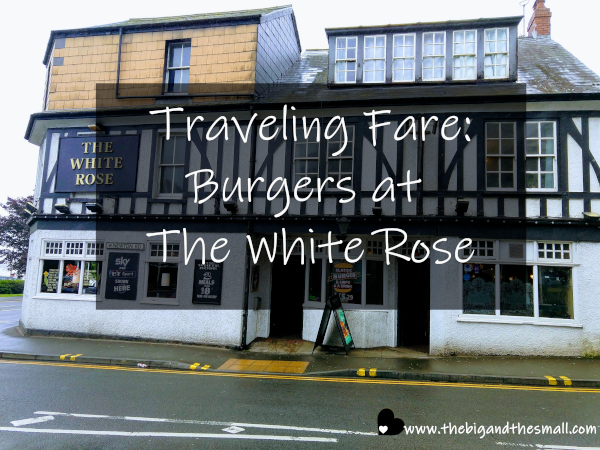 The White Rose pub is at the end of the main street in Mumbles, closest to the sea. We had plans to go there eventually but they got moved up when I looked at the menu and saw they have 2-for-1 burgers on Tuesdays... and as luck would have it, it was Tuesday! There isn't much I'll walk two miles in the rain for... but apparently yummy burgers and cool castles are on that list.

The inside of the White Rose is cozy and warm. We arrived around noon and it had good traffic but wasn't too busy. It's a casual place - you seat yourself and then take note of your table number and order at the bar. I can imagine that system would be annoying if the place was packed, but for us it worked well. 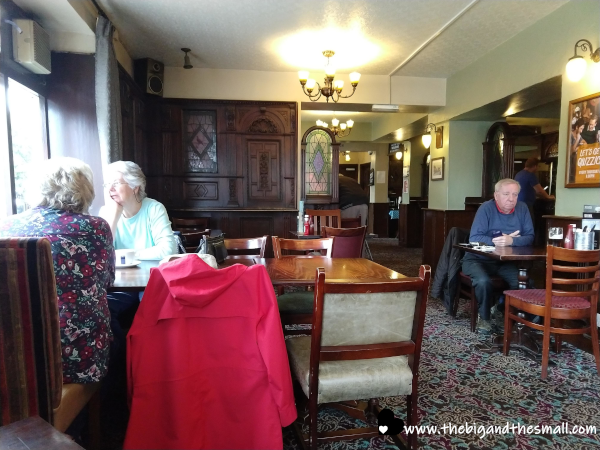 We decided to order the two biggest burgers on the menu - go big or go home, right? Also it would give us the most bang for our buck and we could share them so we each got to try both burgers. The one I ordered was called the Full House. It is a beef burger loaded with a grilled chicken breast, chicken tenders, bacon, monterey jack cheese, salsa and onion rings. Basically they take an entire meal (several meals?) and pile it onto one burger. It was huge. 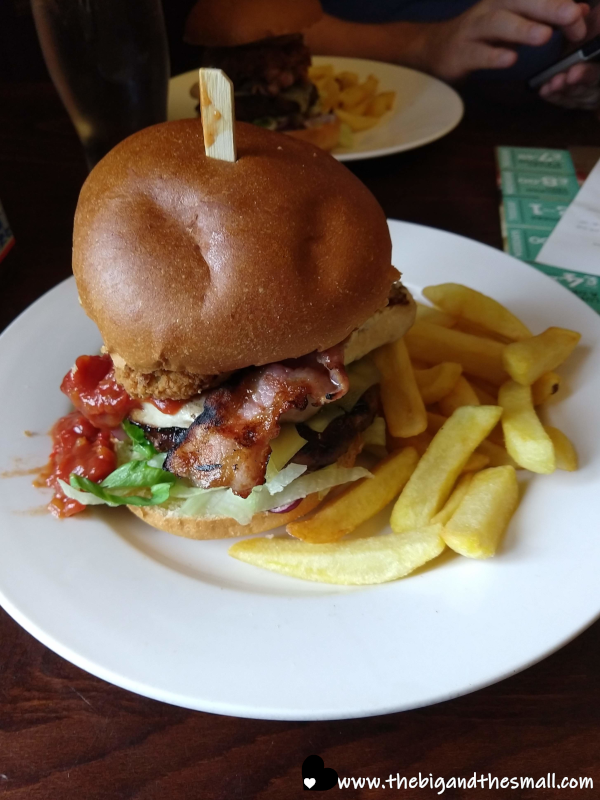 It was so huge I actually deconstructed mine to eat it. I took the chicken tenders off and ate them separately, as well as the onion rings. I set the doubles of each aside so Joel could eat his half as intended. Every element of the burger was delicious. The beef was cooked to my liking (well-done in a burger please) and the chicken was very juicy and tender. The salsa added a nice pop of flavor and though it was messy it was tasty. When it was Joel's turn to eat the other half he added the chicken tender and onion ring back on so he could try the whole thing. 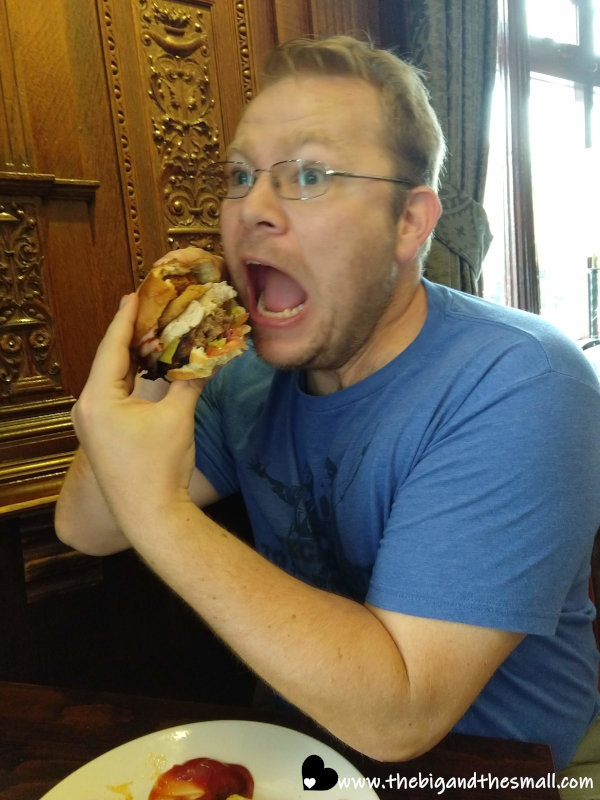 It was hilarious to watch but he did it! 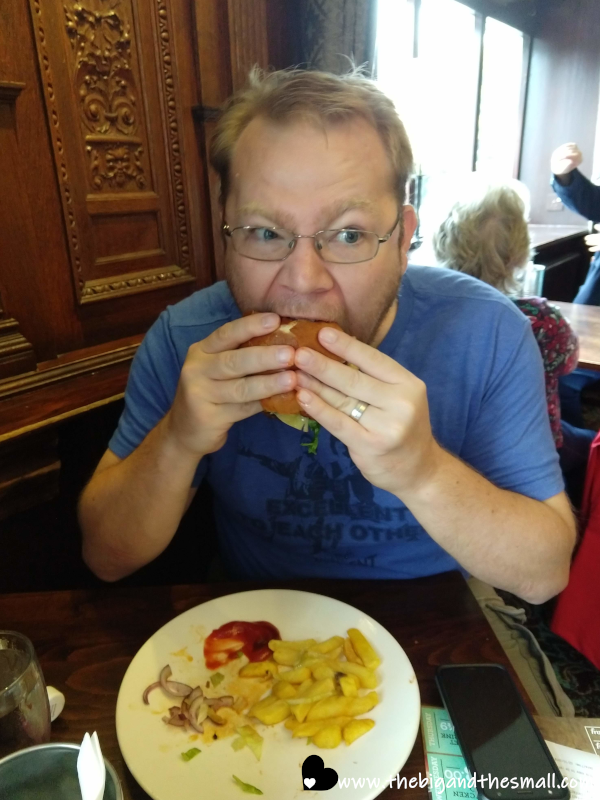 The burger Joel ordered and tried first was called the Ultimate. It is a beef burger piled with BBQ pulled pork, a grilled chicken breast, bacon, monterey jack cheese and onion rings. It was also gigantic. 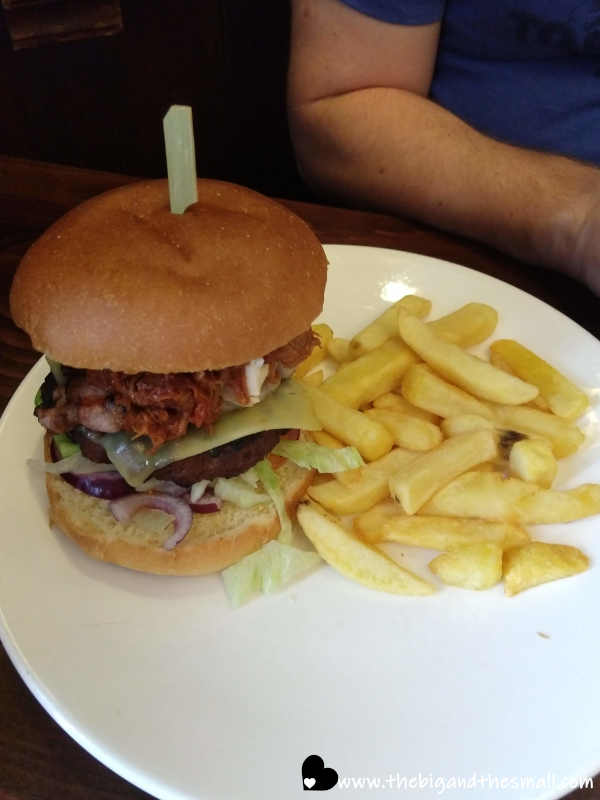 Joel ate that one fully loaded too but I'll spare you the pictures. Both burgers were delicious, though we both agreed the Full House was our favorite. I think the salsa put it over the edge. The crisps (fries for Americans) (EDITOR'S NOTE, crisps are chips and chips are fries and it's all very confusing at times) that came with the burgers were also very good, crispy on the outside and fluffy on the inside. My favorite way to eat fries here is with a mix of ketchup and what they call brown sauce. It's something I've only seen in the UK but it's similar to steak sauce in the US and excellent when mixed with ketchup.

Even though the burgers were incredibly filling we couldn't resist dessert - churros with a range of dipping sauces! The churros were perfectly fried and I loved them with the chocolate sauce and whipped cream while Joel preferred the caramel sauce and strawberries. (Or maybe he just said that so I could have what I wanted; he's sweet like that) (EDITOR'S NOTE - It's true. I really am.). 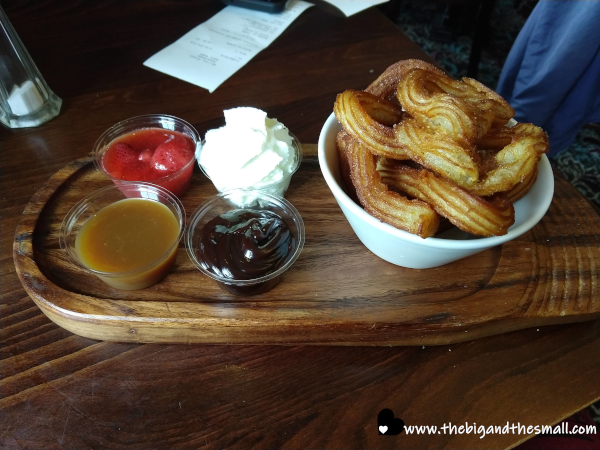 Luckily we had exploring a castle and a two mile walk home to help burn off all the calories we consumed. The food was good and there are more deals to be had so we plan to be back to the White Rose at some point in the future for sure!