On the Way to Wales

Well we've been here about a week, and I think I'm finally ready to start talking about our journey to get here. Like all travel seems to be with us so far, it wasn't easy!

On the surface, it seemed like this journey would be simple enough - our easiest one yet, in fact! We just needed to get to the Berlin airport, take our flight to London, pick up our bags, get on the bus which left from the airport, make one transfer in London, and then arrive in Swansea, Wales where our new hosts would pick us up! It sounds like a lot when I type it out, but compared to our journey to Cyprus which took three days, and our journey to Germany which left us stranded in a Berlin train station McDonald's overnight, this seemed like a piece of cake.

Mary, our host in Germany even offered to take us to the airport, which meant we didn't have to navigate train timetables (and possible delays) with all of our luggage. First thing in the morning, however, things started to go slightly wonky. First off, we planned to leave at 7:30 so we could get to the airport by 8:30 and have plenty of time to check in and get to the gate before our 10:30 flight. But, Mary has two small children and by the time they were ready and the chickens were fed and returned to the coop, it was 7:45 when we left.

Ok, not a huge deal. While on the road I made Joel double check the time of our flight - why I waited 'til we were on our way I have no idea. I definitely should have done this the night before (amateur). Turns out our flight was at 10:00 not 10:30. Ok, not a huge deal, we can still make this work. The route Mary usually takes to the airport involves the autobahn - and lo and behold the entrance to that was closed! With no previous signage or detour offered. Ok, all of these "not a big deals" were starting to add up to one really big deal.

We arrived at the airport at 8:30, and there were two choices of terminal - ABC were all together, or D. We picked ABC thinking the odds are that's where our flight was (there was no signage).  Of course we quickly discovered we were supposed to be in D, so we had to run/walk over there with all of our luggage, only to find a huge line for our airline. Joel asked some staff if we could cut ahead since our flight left soon, and they said to stand in line until they made an announcement about our flight. So we stood around for 15 minutes until they announced that anyone going to London on the 10:00 flight could now jump to the front.

We did so gratefully, giving apologetic looks to those around us. We got to the front and the check in folks were moving so slowly, chatting with each other and generally not caring about efficiency. Then a man came and started yelling at them about his paperwork. We seriously stood at the very front of the line for about 10 minutes before we got checked. The only small comfort was the 10+ people behind us also waiting to check in for the same flight (they couldn't leave us ALL behind, right?).

Then it came time to get through security. A helpful airport staff person told us he thought the line would be shorter back over in terminal ABC, and he even walked/ran over there with us to show us where to go. It was indeed shorter, though not enough to calm my nerves. We stood there waiting in another line and my anxiety went through the roof. I was sure we were going to miss our flight. Eventually my overt anxiety paid off, as one saint of a woman offered to let us cut in front of her. We jumped a huge section of the line, thanking her profusely, and I firmly believe that she is the only reason we made our flight. We got through security, literally ran through the airport to get to our gate (and if you know me you know I don't run and we made it with just a few minutes to spare). I have never been more grateful to sit in an airplane seat.

The flight itself was uneventful, except for some fairly wild turbulence at the end. Upon landing, we had an hour and 55 minutes to get through passport control, collect our baggage and get to the bus which was at the airport. Plenty of time, right? We even hoped we'd have time to grab some food. The line for passport control was long and slow for those of us without EU passports. We had to fill out paperwork detailing how long we would be in the UK, the address where we were staying, our occupations, and more. We filled it out and then waited, waited, waited.

Finally we were called forward by a youngish woman working behind one of the booths. She was unfriendly from the start, though the people who work these places usually are - they never smile back when I smile at them. She asked what we were doing in the UK, and when I told her "housesitting" she got a suspicious look on her face and immediately started grilling us about it. She didn't understand what it was, even though we tried to explain it, kept asking us if we get paid to do it (we don't), then asked us how much we paid them to stay in their house (nothing, it's an exchange of services), and on and on. At one point she asked us how much money we had in the bank! Then she asked us to step aside and she called over a supervisor.

We stood and waited for about 10 minutes while she spoke to a supervisor. The two men she called over didn't seem nearly as concerned as her, judging by the looks on their faces. Finally she called us back and grilled us for a few more minutes. We confirmed that we could spend 6 months in the UK without a visa, as our research online had told us. She said yes, that is correct, but if we get to close to that deadline "we might have trouble leaving". She kept saying "I don't have a problem with you, but you might have trouble in the future." Um, ok lady, but you sure do seem to have a problem with us right now!

Eventually, after a nerve-wracking 25 minutes of dealing with her, she stamped our passports and let us through. We immediately made our way to the luggage carousel (which was by now nearly empty) to gather our bags and found 3 of the 4 circling around. (Our two large carry-ons they made us check at the gate... normally we only have 2 bags checked). One of our bags was missing! I fully believe that if the passport lady hadn't held us up for so long this would not have happened. We waited about 10 minutes to be sure our bag wasn't going to show up, then Joel went to the office to file a claim.

At this point we were inching ever closer and closer to the time our bus was supposed to leave for Wales. At one point I was sure we weren't going to make it. Joel was able to file the report just in time (after standing in another line for a while of course), he came and got me and we made our way to the bus. We were starving but had run out of time to grab food, so we just had to tough it out for the first 2 hour journey of the bus ride, and hope we would have time during our transfer to grab some food. 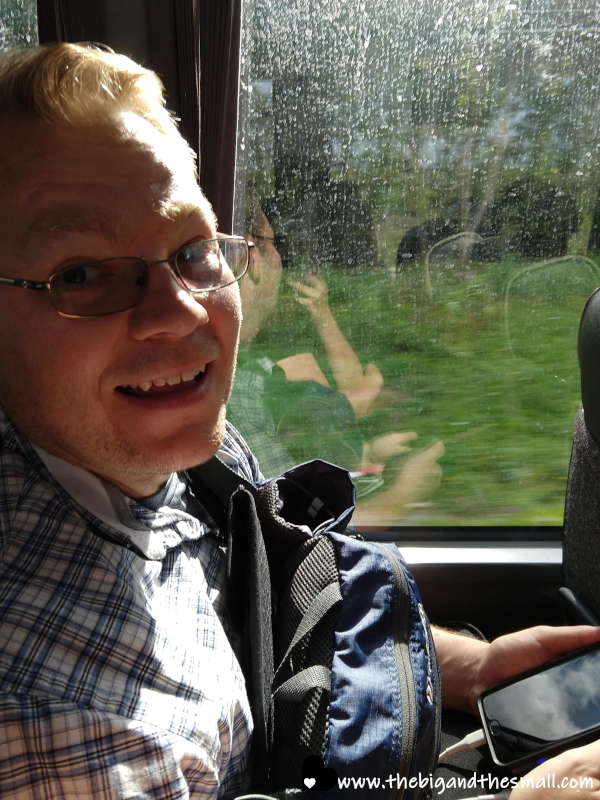 The bus was quite pleasant - clean, comfortable and not completely full. It wound its way through the streets of London and I got to see some things I recognize from movies - Big Ben, Tower bridge, the Ferris Wheel. But holy cow does it take forever to get through the city! Our first two hours simply got us to a transfer on a different side of the city, and then it was another hour and a half before we were out of the city. Crazy. 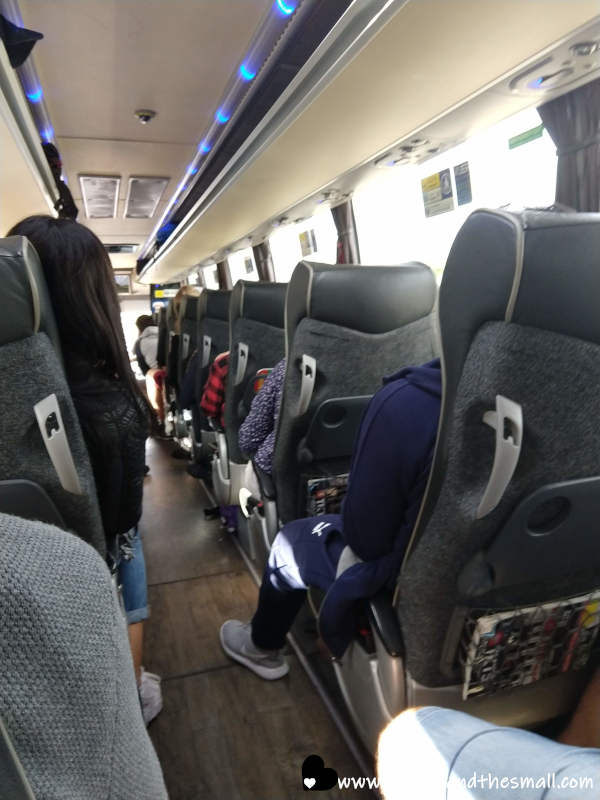 At the transfer we were able to grab some delicious food at an adorable little joint called Mr. Lasagna. At that point, with food in my belly, and twenty minutes till the next bus I was quite content. The toughest parts were over and though we were missing a piece of luggage, we could deal with that later. After eating we found the next place to get on the bus, and we were off! Just another 6 hours until our scheduled arrival in Swansea (for a total of 8 hours on the bus). The train would have been faster, but the bus was cheaper. 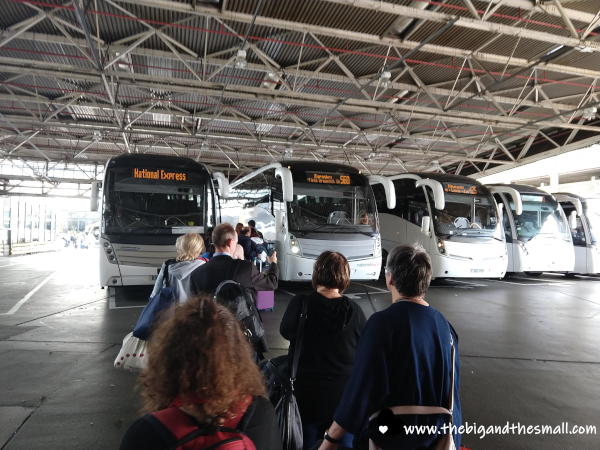 When we did end up arriving about 20 minutes late, apparently the traffic in London was exceptionally bad and set us back quite a bit. Our hosts, Andy and Christina were waiting for us and we were ever so glad to see them! We got to their house fairly quickly, and though it was now almost ten o'clock at night, Christina had a homemade chicken curry waiting for us. 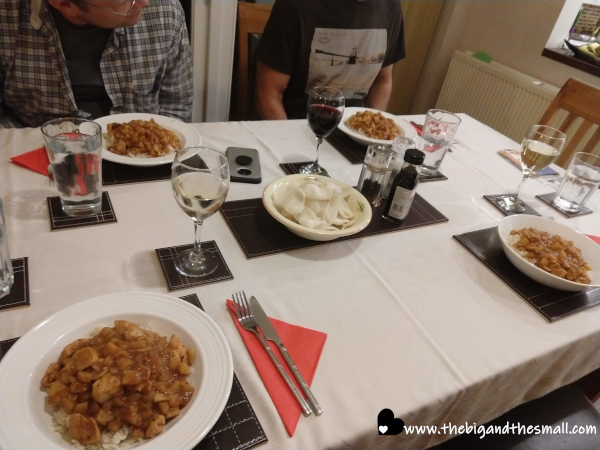 The food was delicious and the company even better. We had spoken with them over Skype and via email, but this was our first time meeting in person. It turns out Joel and Andy have quite a lot in common (love of music and a massive sweet tooth for some), while Christina and I have a lot in common (love of travel and cheesy sitcoms for a start). We stayed up 'til after midnight, eating, chatting, and drinking wine. When it was finally time to crawl into bed we were beat, and ever so glad to be here.

I hold out hope that our travel between housesits will continue to get easier - at least this time we didn't have to sleep on buses or in train stations; we made it from one bed to another in the course of a day. I've learned to always quadruple check flight times the night before, and I think we have some better answers in store if we run into another suspicious passport control person. In the end all the struggle of travel is worth it to be here.

Have you ever been running late for a flight? Did you make it or miss it? Have you ever had trouble getting into a country? It's scary when they are suspicious of you! Tell me all about it!

We had a Home Alone experience trying to catch a plane with two five year olds in Atlanta.  We had to seriously run through the airport and barely made our flight.  Never lost our luggage though.  That would be frustrating

Re: catching a flight

Oh man, having two five year olds would bring a whole new level of challenge! Did you carry them or make them run too? Losing our luggage was definitely frustrating, thankfully it is back at the airport now, we just have to figure out how to get it in our hands.