The History of Our German House(sit)

Before the details start to slip my mind, I want to share about the actual house we stayed at in Germany. It is an older farmhouse, built early in the 1900's. I suppose that makes it old by US standards, but probably fairly young compared to a lot of places in Germany. 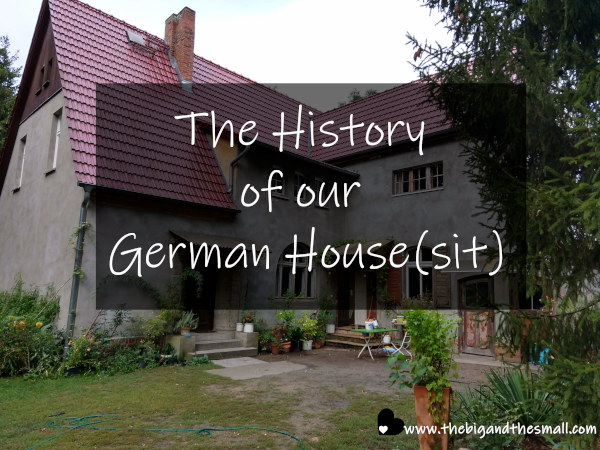 When we applied for this housesit we didn't really know what we were getting into. Mary did warn us that the house was old and that they are always in the middle of remodeling/working on it, but that sounded okay to us. Truth be told we were getting a little desperate, as we were scheduled to leave Cyprus in about two weeks and had nowhere to be for about two and a half weeks before our housesit in Wales. So despite having seen hardly any pictures, and no video tour of the property, we took a chance and said yes. And we are glad we did!

The house is huge, which you can tell by looking at it from the outside. While they are in the midst of upgrades, it's quite livable as it is. The kitchen even had a gas stove - my first time cooking on one with any regularity - and I loved it. That's going on the someday dream house wishlist - gas stove. We saw the upstairs briefly when Mary took us on a tour, but we were asked to keep that space private while they were gone. There were huge rooms filled with sunlight from the large windows, and gorgeous old details like original hardwood floors, carved wood trim, and antique door handles.

What Mary told us about the history of the house surrounding World War II was quite fascinating.

Before the war, the house was a summer holiday house for a wealthy family. Which makes sense, since it is so close to the gorgeous lake nearby. The house was well kept by a myriad of servants, groundskeepers and others who kept it in tip-top shape when the family wasn't there. Mary showed us pictures she has from the 1930's, and then we compared them to how those spots look now.

This one was taken standing at the back of the house, looking out onto the backyard. You can see the beautiful gardening and the massive amount of upkeep that would have taken. There's a fountain in the middle and the hedges grown high for privacy all around. The gate at the back led to the rest of the grounds, where there were orchards and gardens aplenty. 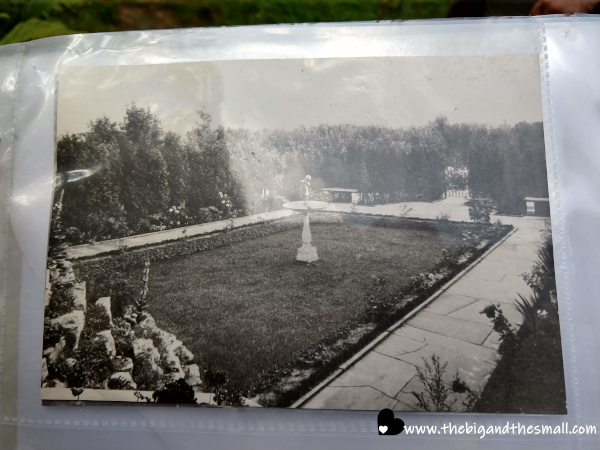 Now, that spot looks quite a bit different. While Mary and Sebastian have done a lot of work on the house, they've let the grounds go more natural. With two small children, two jobs of which his requires a lot of travel, and all the animals they just don't have time for fancy gardening. Even so you can see where the border once was, where the fountain would have been, and the stone steps leading down to that area are still intact on both sides. Gone, however, are the hedges that provided privacy, and the gate that separated this area from the rest of the grounds. 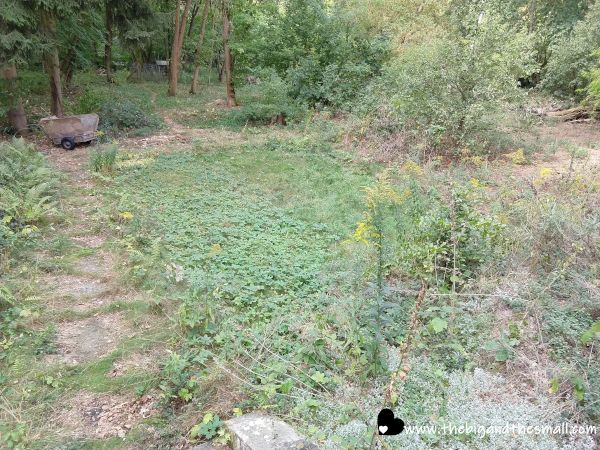 This next picture was taken standing just outside the gate, looking up to the back of the house. You can see how private the backyard would have been with all that greenery. 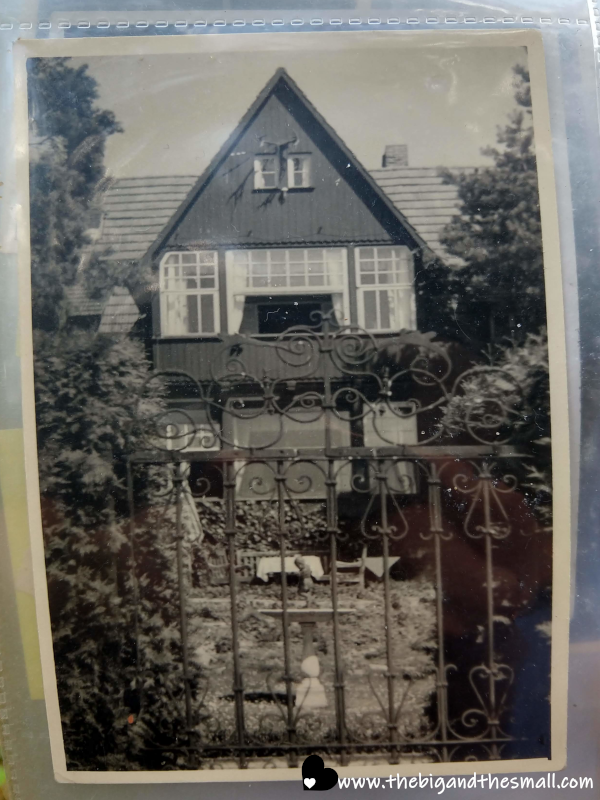 These days the high greenery and the gate are gone, but the house still has a lot of privacy. It is set back from the street enough that you can't see it if you are just driving by, and the one side that has neighbors are set closer to the street. Once you are at the house, you really feel rather alone in the forest. This angle gives you another glimpse at just how big the house is - with the main floor, second floor, large attic, and you can't see it here but there is a large cellar as well. 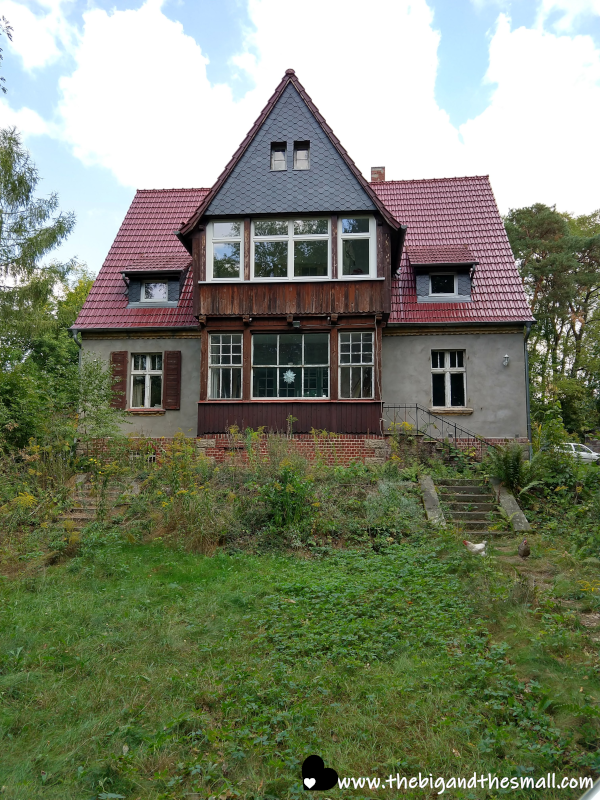 From this spot in the backyard you can keep moving through the trees and the brush to the back of the property. Many of the old structures are no longer there, but there is one gate left standing. Mary referred to it is a "fairy gate" because she thinks it feels like something out of a fairy tale. She's not wrong. The gate appears in front of you through the greenery like, well, something out of a fairy tale. The ornate metal gate stands open, inviting you into another world on the other side. 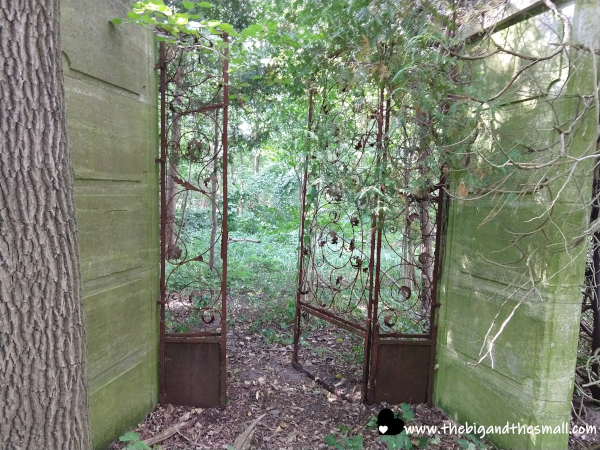 When we stepped through we were not transported to a magical land, unfortunately. Just more trees and forest, which are of course beautiful in their own way. If you kept moving that way you would eventually come across a river that runs behind the property and feeds into the lake. Back when the property was at its peak, the way to the water would have been cleared and easy to walk for the family.

When the second world war came about, the family who owned this property worked with the state and the Nazis. The exact history was a bit hazy, but I distinctly recall Mary calling them "Nazi sympathizers". Thus, when the war ended, the family was removed and tried and punished for their involvement. For a while then, the house stood empty.

When the Berlin wall went up in 1961 during the Cold War, this house was on the East side. People moved into it and lived there even though they technically did not own it. The house was so large it housed several families, serving more as multiple apartments than one family home. It was like this until the wall came down in 1989. Then the people who had been living there moved on to other places, and the house stood empty once again. This time it officially became property of the government of Germany, and it was available for purchase.

No one purchased the house for a very long time, so it stood empty, and, as you can imagine, falling even further into disrepair. Finally in 2001, Mary's mother bought the house for a mere €30,000. While that is a small sum for a large house and property, when you consider the amount of money needed to make it livable again, let alone return it to its former glory... well, it won't be cheap in the end.

Mary's mother passed away a few years ago, which means the house is now hers. Now that it is fixed up and livable it is starting to catch the eye of people in the surrounding area, and apparently there are some complaints about how they got the house for so cheap. Of course those same people could have bought it if they wanted to! Such a human trait, though, to not want something until someone else has it.

With such a varied and storied past, we feel privileged to have spent some time in this old home.

It's incredible to think about all the history that surrounds this place - the kinds of things I've only read about in history books - yet were very real here.

World War II has always felt like something in a very distant past, the Cold War like something well before my time. And yet the effects of WWII were all around, and Mary and Sebastian could speak of aspects of the Cold War as their shared, lived history. It made everything come to life so much more - as a factual, true history of the world. It makes me realize how little of the world I have experienced, how sheltered I have been in my life, and how much I have to learn. I am grateful I learned here for a little while.