On a Bicycle Built for Two

If you follow us on Instagram or Facebook, you probably saw that while we were in Germany we rented a tandem bicycle and went on a small adventure. I'm technically a little late on this blog post, but it feels like just yesterday to me - probably because I'm still a little sore from the dang bike seat! 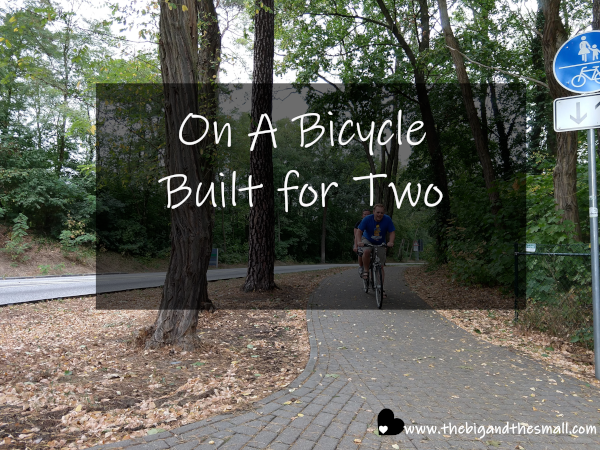 The bike rental place was only about a five minute walk from our housesit in Wendisch Rietz. It took us a few days to realize it was a rental place with tandem bikes, because the first time we walked by (on a weekend) literally everything they had was rented out! When we walked by again on Monday we were surprised to see all the bikes, and immediately formulated plans to rent one ourselves. At first we considered two single bikes which rent €9 a day, but I talked Joel into the tandem bike which rents for €14. I wanted to do this for two reasons - 1. it would save us a bit of money, and 2. I wouldn't be lagging behind Joel all day on my bike! He's way faster. 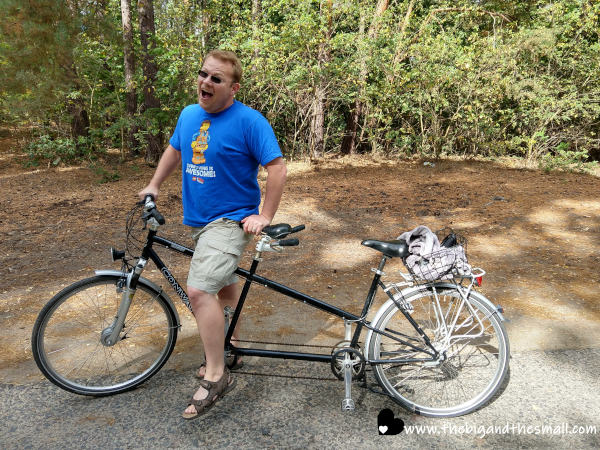 We were surprised to find that the rental place only took cash. This is a marked difference from what a similar operation would be like in the states. In the US, we would likely be required to use a credit card so that if the bike got damaged or we didn't return it, they would have a way to charge us. Here we gave them €14 cash and rode off into the sunset. They didn't even take down any information! We totally could have owned a tandem bike for the low, low cost of €14, if we were those kind of people. (We aren't). 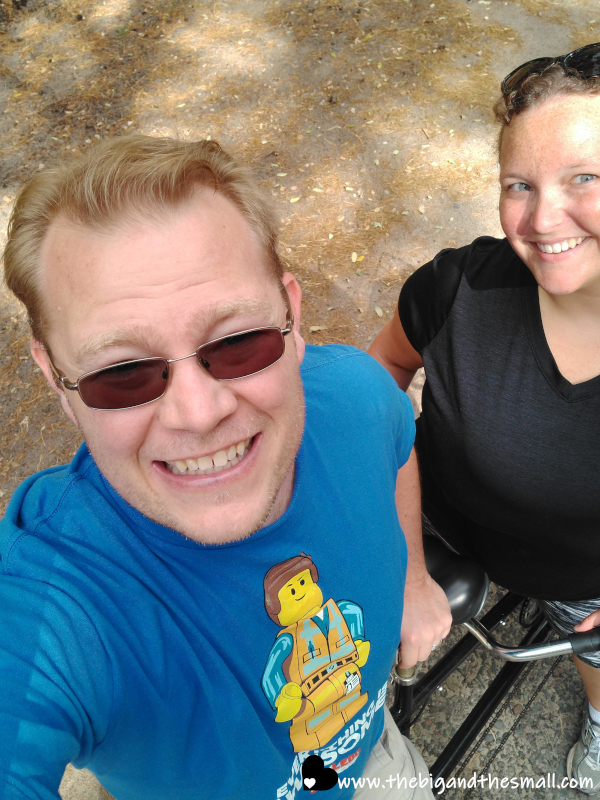 Once we had our bike, it was up to us to figure out how to ride it. We both know how to ride bikes in general, but I had only done a tandem once (years ago with a cousin, it was a disaster) and Joel never had. It took some real trial and error to figure out, and boy does it require constant communication and teamwork! Getting started is the hardest part, because you both have to balance on the bike and then start pedaling at the exact same time in the exact same way. Once we were moving it was fairly easy, and stopping wasn't terribly difficult.

We almost returned the bike after a mere five minutes because of one big problem - the seats were extremely uncomfortable. It jammed right into my sit bones and stayed there, and after just a couple minutes I could tell I was going to be sore as heck before we were done with this. We rented the bike with the intention of riding it to the town of Bad Saarow, about 11 kilometers from where we were staying in Wendisch Rietz, and despite the pain, we decided to tough it out. I did take my jacket and add it to my seat as a layer of cushion, which helped a teensy tiny small amount. 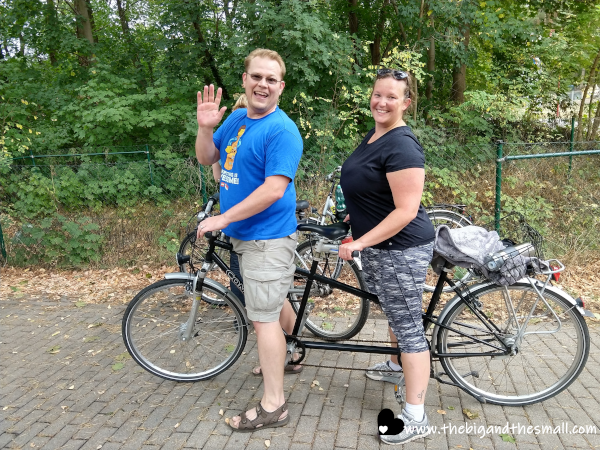 The ride itself was quite lovely. There was a great bike trail to follow that took us alongside the road, through the woods, and in some cases along the lake. We encountered other bikers along the way and realized that with the tandem bike we were going really fast! It was awesome to be able to speed along and pass people right and left (when I'm on my own on a bike I'm usually the one getting passed).  We made the 11km trek (about 7 miles) in about 40 minutes, and that included some stops for pictures along the way.

When we arrived in Bad Saarow I was so excited to get off the bike and give my butt a rest. I hightailed it for the nearest bench, and sitting on a comfortable seat felt glorious. Joel walked around to find a place to lock up the bike, while I admired the scenery. We were on a road right near the lake, and it felt like part road, part walking trail. I wasn't entirely sure you could drive on it until I saw someone doing so. 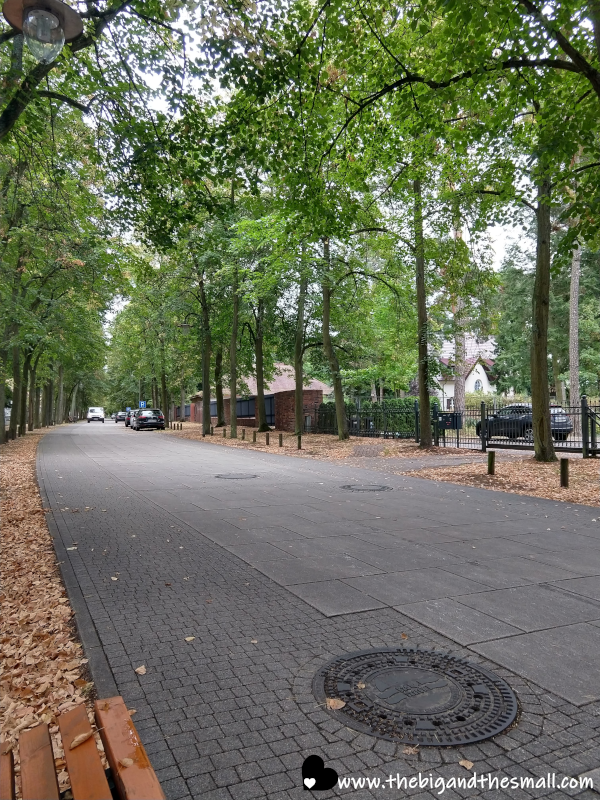 After locking up the bike, Joel came and got me and said he had something to show me. We walked over to the shore and found people building rafts! I had seen someone rolling a blue barrel down the street, and vaguely wondered what it was for - well now here it was! They had barrels, wood, and rope, and seemed to be working in teams of 8 to create the rafts. It was interesting to watch each team work together and find different ways to make a raft out of the given materials. And since we were in Germany, there seemed to be copious amounts of beer involved as well. 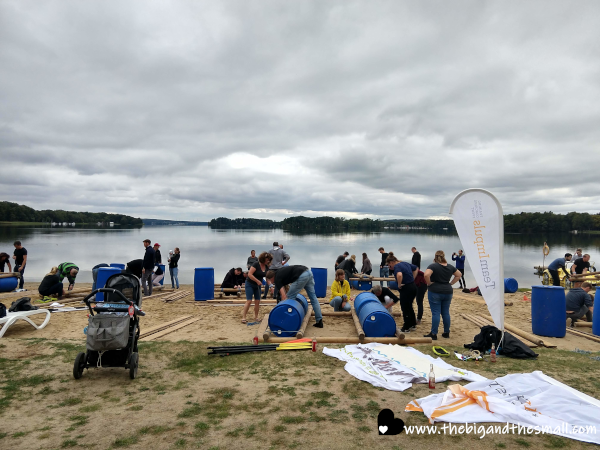 We left the rafters for a while, and returned about an hour later to find they were finally putting them out on the water! Joel was convinced they were doing some sort of race, which makes sense, but they sure never seemed to be in a hurry. Each raft ended up with 8 people aboard, and some were closer to dipping into the water than others (which would have been freezing!). They seemed to leisurely float out onto the water in no particular rush and with no particular destination in mind. We stopped watching before any official competition got underway, but Joel is still convinced they were racing. 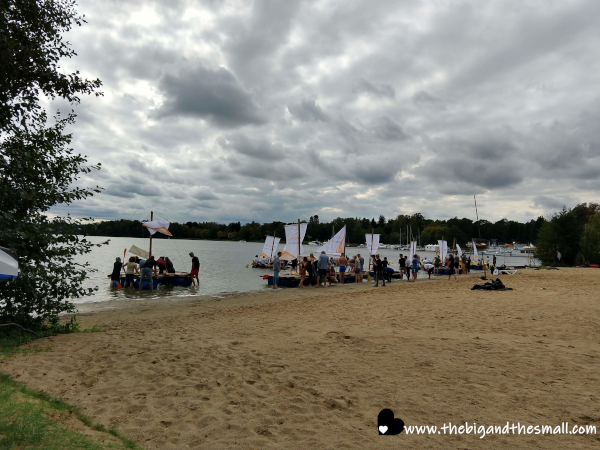 We wandered all around Bad Saarow and I, for one, was grateful to be off the bike for a while. They were setting up for some sort of event that night that included carnival rides, a band, and we saw posters advertising fireworks. I wish we could have stayed, but the bike needed to be returned by 5. I was surprised at how much the festival looked like something we would see in the states - bumper cars, small roller coasters, all the rides and game stands you might see at a small county fair. There was one booth, however, that stood out like a sore thumb. Correct me if I'm wrong, but I don't think you'd see this one in the states. 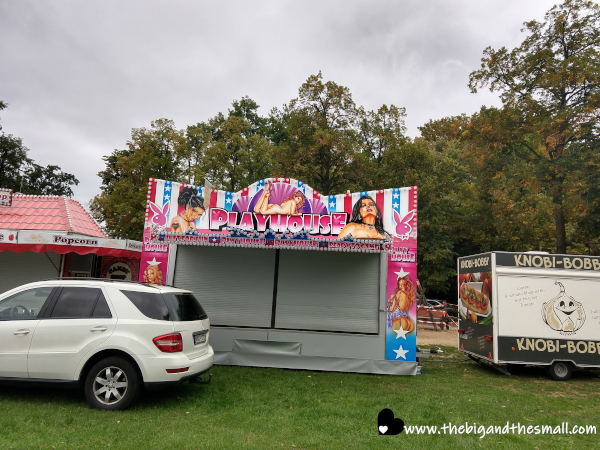 We never did figure out exactly what that one was for - some kind of game? selling something? I don't know and I'm not sure I want to know! After the carnival area we found the tourist center for the town, but it didn't really have any information. (It did have a free bathroom though, score!). We also explored a huge, beautiful park area by the lake. The day was gray and a bit gloomy, but it was nice to be outside nonetheless. 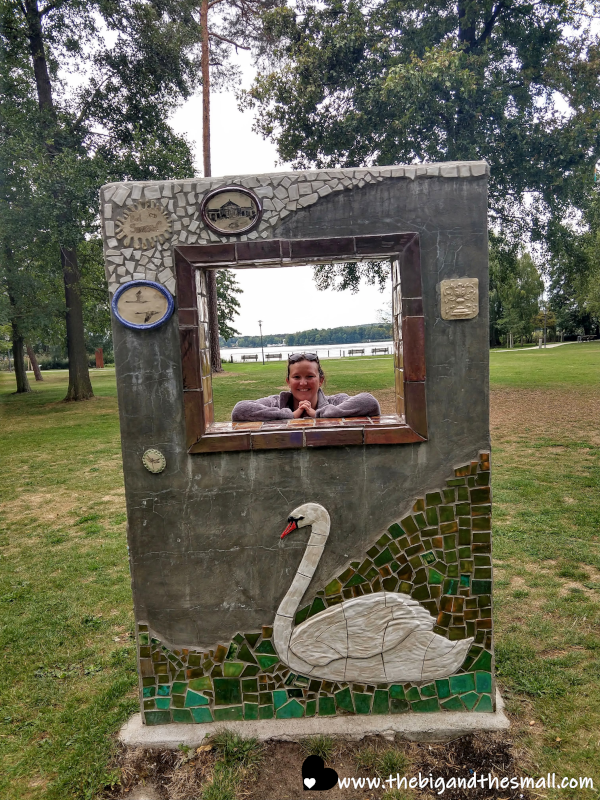 After exploring everywhere we could easily walk to, and watching the rafters for a good long while, we decided it was time to head home. Neither of us were really looking forward to it because we were already so sore from the bike seat. After we got going we pretty quickly devised a plan to make the ride slightly more bearable. Any time that we could stand up on the pedals and coast instead of sitting and pedaling, we did. It took coordination, and Joel shouting at me like a drill sergeant to do it right - "Ok, left foot this time, on three, two, one, NOW!" Then we would stand up on that side, relieving our backsides, and coast until we had to sit and start pedaling for momentum gain. It made the ride take longer, but it was much more tolerable.

All in all we enjoyed our time in Bad Saarow, and even enjoyed riding on the tandem bike. The tandem part and the bicycling parts I enjoyed, and really could have done for a much longer time if it weren't for those darn seats! I swear they were torture devices in disguise. If the bike had comfy seats it would have been way more pleasant, but we had fun anyway. If we get a chance to rent a tandem bike again I am all for it, but I'm testing out the seats before I pay any money!

I have never been to Germany…

I have never been to Germany before but I visited the Netherlands a lot. I would ride bikes a lot there, and oh my god it was painful! I remember the soreness and it was so uncomfortable. The photos are great and it looks like you had an amazing time! :)

Thank you so much for sharing!

Oooh I want to go to the Netherlands!

The Netherlands is high on our list of places to visit - so thanks for the heads up about the bike seats there! What is it with bike seats being so uncomfortable? Whyyyy?

We did have a lot of fun, thanks for checking out the post! :)