The Top 5 Reasons You Should Visit Cyprus!

Beyond the beautiful Mediterranean beaches and warm weather there are a lot of reasons to visit the beautiful island country of Cyprus. After living on the island for almost six weeks, here are our top five reasons everyone should visit Cyprus! 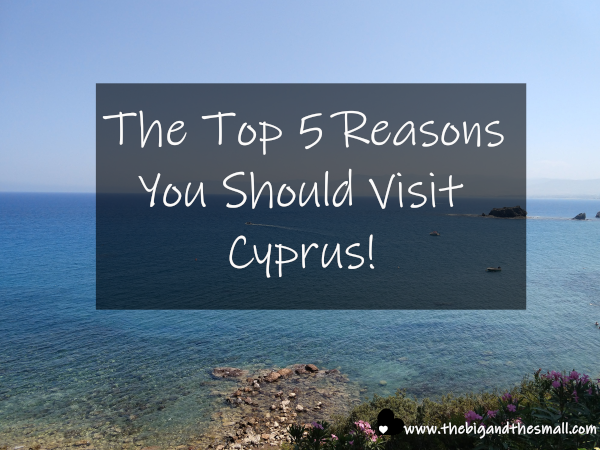 Ancient history feels like it's all around you in Cyprus, especially in the city of Paphos, which is now an UNESCO (United Nations Educational, Scientific and Cultural Organization) world heritage site. We stayed about 40  minutes from the city but thanks to the amazing bus system on the island we were able to easily take a couple trips there.

Once in Paphos there are two places you do not want to miss! The Tombs of the Kings is an ancient burial ground for rich citizens and high government officials - these tombs have some of the best views on the island! Some of them date as far back as the 4th century BC - around 2500 years old! I'm telling ya, ancient.

The second place you want to make sure you go is the church at St. Paul's Pillar. This historical site is mentioned in the book of Acts in the Bible, as the place where Paul was whipped 40 lashes for daring to preach the gospel. An active church still stands and operates on the site, surrounded by ruins of churches that were built up and destroyed during conflict over the centuries.

All around the island it is evident that the people of Cyprus still take their faith seriously. The most common religion is Greek Orthodox, but there are some Catholic and Protestant churches as well. Almost everywhere you go you will find small but active churches, usually with their doors open to the public so you can enjoy them (respectfully of course). On our first tour around the island with our hosts we enjoyed visiting this small church. On our last day on the island we visited the Monastery of St. Neophytos which is built into the mountains and absolutely stunning. Even if you aren't a person of faith I think you would enjoy visiting these places.

The bus system in Cyprus makes it pretty easy to get around the island - and you can get a day pass for only €5! We used this often to visit Paphos, Polis, and more. In addition to world history and orthodox churches, the island is a hotbed of important places for Greek Mythology. Aphrodite was born on Cyprus, and you can visit baths for Aphrodite and Adonis. In the end we found Aphrodite's Bath to be rather lacking, but some other parts of our trip were great, and the bus system made it easy to get around!

Let's be honest, every time I make a list of my top favorite things about a place we have visited, food is likely going to be on that list. But really, the food in Cyprus was great! You definitely want to make sure you don't miss out on halloumi. Halloumi is a delicious salty cheese that can be grilled on it's own and then served hot and slightly gooey - it's really as good as it sounds. Most restaurants around the island will serve some form of halloumi (just make sure you get it grilled not fried so you can really enjoy the cheese).

As for specific restaurant recommendations I have two can't miss choices. They are outside of the city of Paphos, but worth the trek if you can figure out how to get there. The first is Geitonia Kebab House in Peyia - if you go here be sure to get the €9 Meze. You will get an incredible deal on more food than you can eat and the wait staff treats you like family. The second place is hard to find and basically only locals know about it but I am going to spill the secret here - The Last Castle is a restaurant with amazing food and even better views. You'll need a car to get there but trust me, it's worth it.

This one probably won't matter quite as much unless you plan to stay a long time and/or have access to a kitchen, but seriously, the access to fresh, cheap produce was incredible! We often walked away from the local fruit market with several days worth of fruits and vegetables for less than a euro. Even if you are staying in a hotel, find a local fruit stand and grab a nectarine or peach for an afternoon snack - it will cost you pennies and be one of the yummiest fruits you've ever had!

So there you have it, our top five reasons to visit the beautiful island of Cyprus! Do any of them have you ready to hop on a plane? Let us know below!