Traveling Fare: An Afternoon at the Atelier Cafe

On our first night in Germany we met some friends of our hosts, and it turns out these friends own a cafe here in Wendisch Rietz! We, of course, had to go check it out, and we are so glad we did! 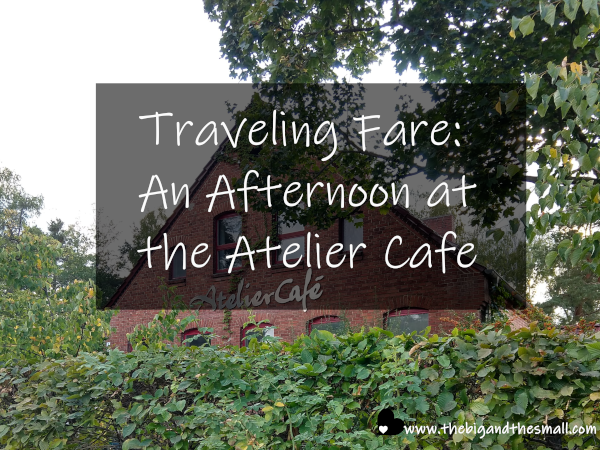 We went in the evening after our 13 mile tandem bike trip, so it's safe to say we were exhausted. Along with the exhaustion we were hungry so it was the perfect time to go to the cafe. We had to walk about 3/4 a mile from our housesit, but to be honest, after hours on a bike seat that hurt some... shall we say 'sensitive places', I was grateful to be walking on my own two feet again. The cafe is in a charming old house, only part of which has been turned into the area for the public. As soon as we entered it smelled like a coffee house - that comforting mixture of brewing coffee and sweet treats. The inside was cozy and welcoming. 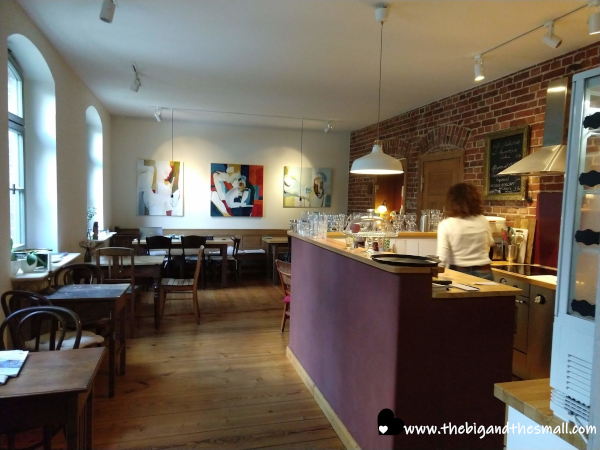 We talked with the owners, John and Julia, and asked what on the menu we just had to order. Of course, we were immediately distracted by the desserts they had on display. I was ready to try them all but on Julia's recommendation, we narrowed it down to the plum cake with a meringue topping - it was the special for that day so it isn't always available. We also asked if they had any "real food" as Joel put it - aka something besides desserts. Julia told us about several options including a delicious sounding pasta, then mentioned something that she called a "classic German food" so of course, we had to order that. 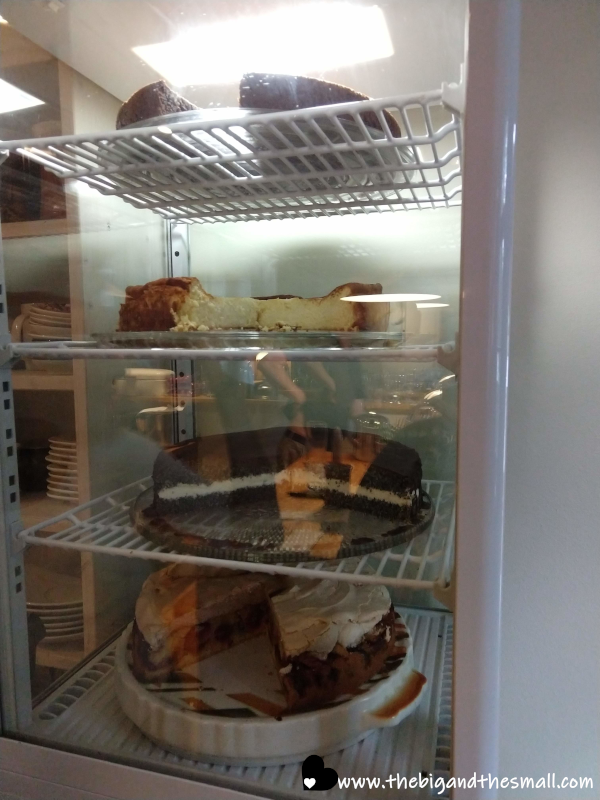 After we placed our order we wandered over to the other side of the cafe where there is more indoor seating blocking off an artist's studio area. Suddenly the name of the place clicked for me - the Atelier Cafe, of course! An atelier is a workshop or studio used by an artist. John and Julia have the cafe open only Friday-Sunday from noon to six, and during the rest of the week they work on their art. They had mentioned as much back when we met our first night in Germany, but it was so late that night and I was so tired I had forgotten this bit of information. 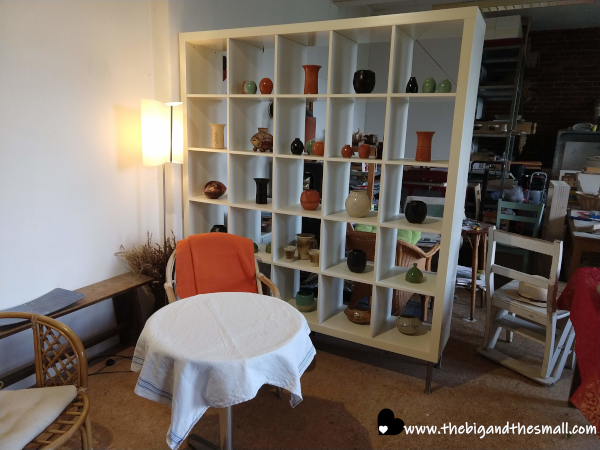 It was such a beautiful day outside we decided to sit on the patio, which is basically a part of the garden attached to the house. There were gorgeous flowers everywhere and tables scattered throughout. 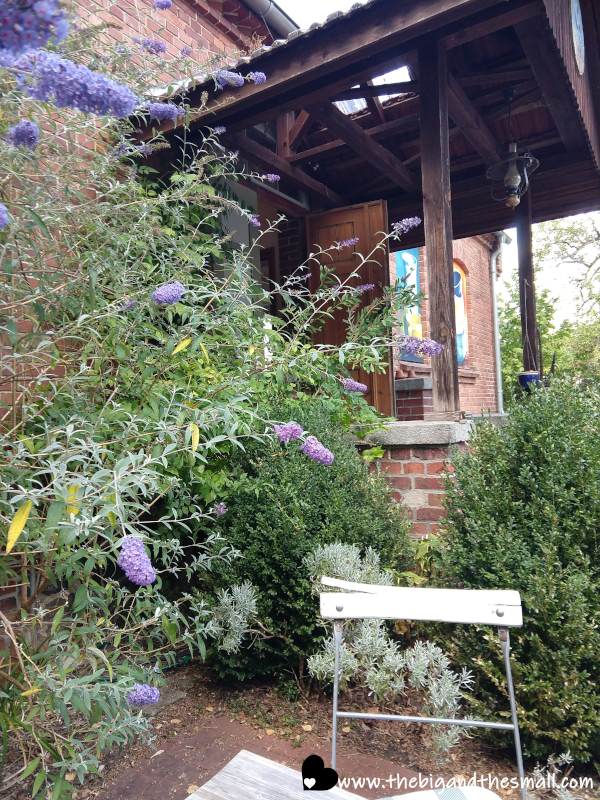 We didn't have to wait long until Julia brought out our food, and we were excited to dig in. The traditional German food she told us about was baked potatoes and herbed quark. Quark is a fresh dairy product that is sort of like a cross between sour cream and cottage cheese. Here Julia added a ton of fresh herbs, drizzled it with an oil that is made in the nearby area, and garnished with tomatoes and spring onions. She told us to simply take a bit of potato, cover it in the quark and it eat together. It was incredible. This might be my favorite thing I ate in Germany. It was just so simple and fresh and yet so flavorful! I wish I knew what all she put in the quark so I could try to recreate it someday. 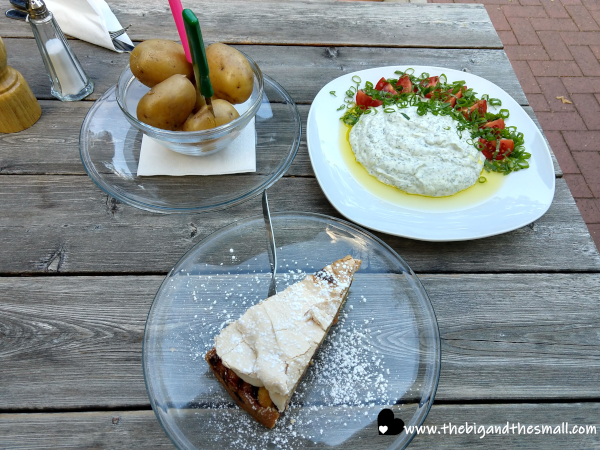 Before we ate Joel was super excited (as you can see), and after he loved it as much as I did. Although his favorite part was the dessert - and for good reasons. The plum cake was great, filled throughout with huge chunks of fresh plum. The showstopper was the meringue on top. It was light, airy, and literally melted in your mouth. Putting the two together was a stroke of genius on someone's part. 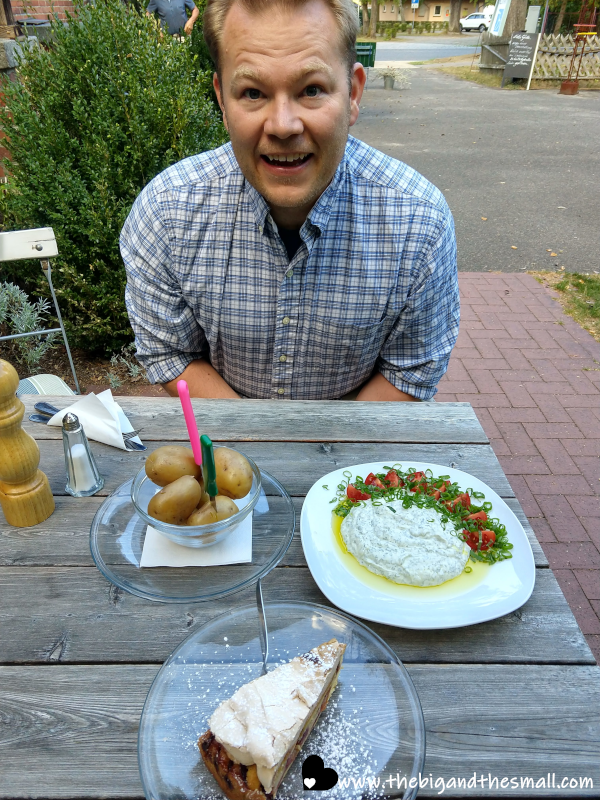 We enjoyed our experience at the cafe so much we went back just a couple days later. When we were leaving Julia told us that another dessert is actually their signature dessert - a chocolate poppy seed cake. It is a family recipe of hers and what they are known for in the area so of course we had to return to try it. 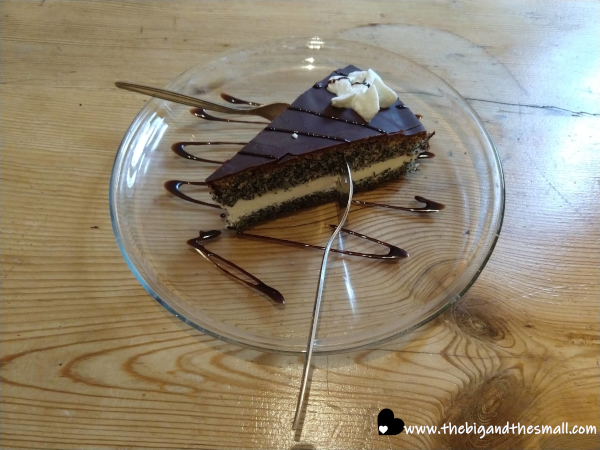 The cake was good, but it had some tough competition with the plum/meringue cake and I think the latter one won. The poppy seed one was still quite good, and if you visit when the other one isn't available you should definitely try this one. It has tons of poppy seeds in it which gives an interesting crunch - not quite what I expect from a cake but not unenjoyable. The chocolate/poppy seed mix is a new one for me; I'm used to seeing poppy seed with lemon. All in all a good dessert and a close second to the first option we tried.

If you are ever in the area of Wendisch Rietz you definitely have to check out the Atelier Cafe, and tell John and Julia we sent you!