Ever since we got to town this restaurant with the bright orange facade caught my eye. On a whim last week, when we didn't feel like cooking or washing any more dishes, we decided to check it out. We were supported in the endeavor by the very generous patronage of Fred Lewis on our Patreon! Thank you Fred for supporting our blog, our travel, and our date night at Messingkrug! 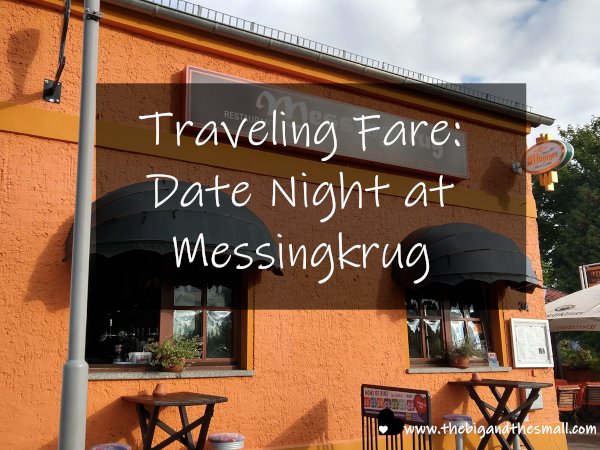 The weather that day was perfect, so I talked Joel into sitting on the patio. He usually doesn't like to sit on patios because he is convinced the service is always sub-par - the wait staff tends to forget about you since you are out of sight, out of mind. We peeked inside before we sat down (to make sure they take credit cards, we've been burned before) and while the inside was nice, no one was sitting in there. Since everyone was outside we figured the service should be pretty good - and we were right! 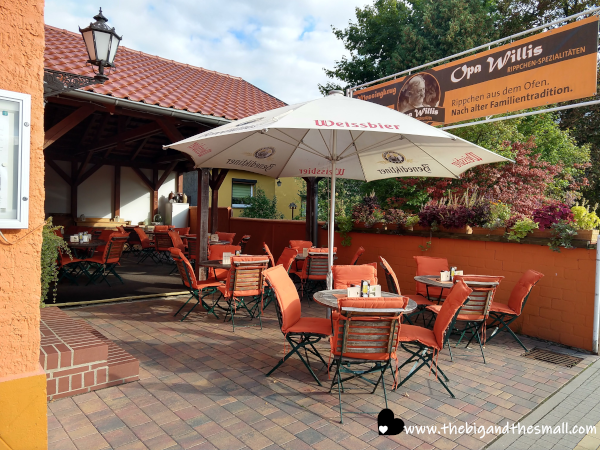 A very friendly waitress who spoke some English checked on us almost immediately, and brought menus in English. We can usually get by with the Google Translate app to help us figure things out, but it was nice to read the full descriptions in English. The specialties here seemed to be the burgers and the ribs, so we decided that we should get one of each and share. On the ribs we had a tough choice - all of the options seemed delicious. When we went to order the waitress let us know we could actually get two different kinds, so we went with the first two listed: Opa-Willis and Reitzer Ribs. 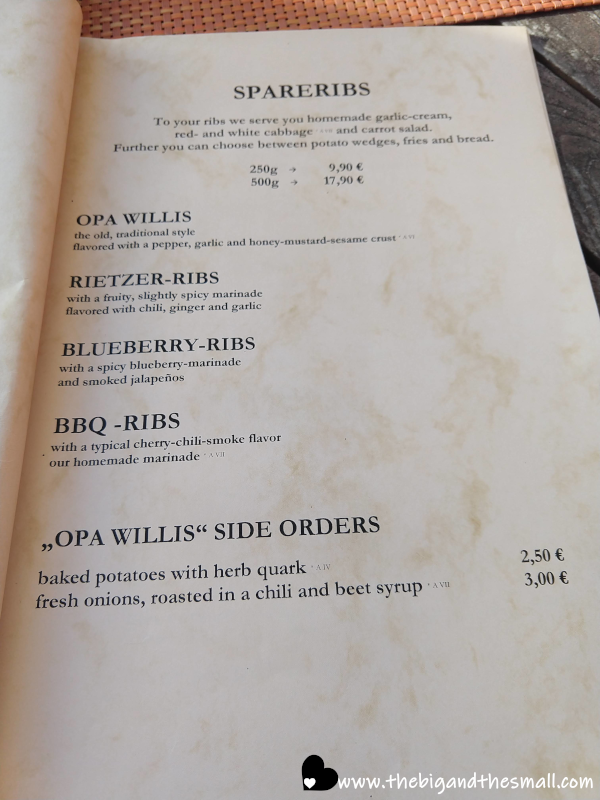 When it came to the burgers there was only one clear choice for me - the Scharmützelsee Burger. Not only did it sound delicious (bacon, fried egg, homemade burger sauce!) but it's named after the nearby lake where we went paddleboating. Anything named after a local attraction just has to be good, right? 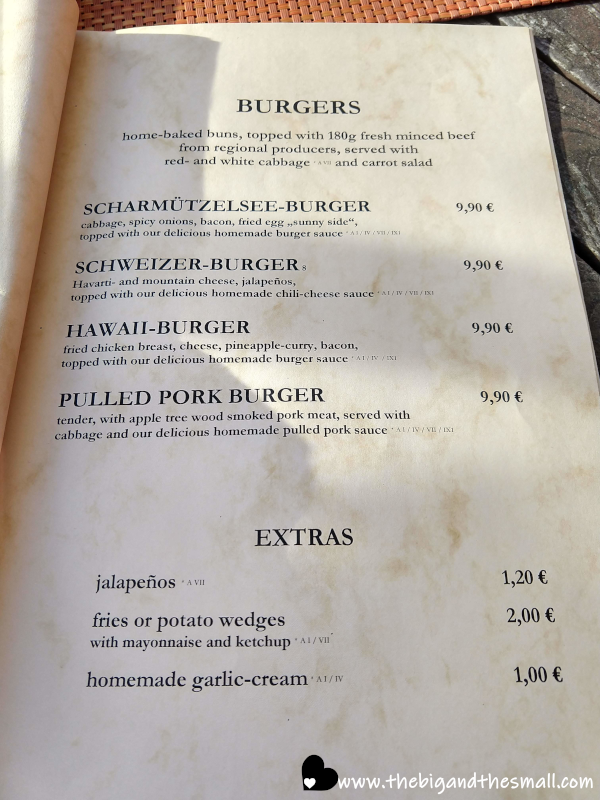 We placed our order for food, and we did get a bit of a strange look from the waitress for not ordering any drinks. We were literally the only people in the restaurant that didn't have a glass of wine or a mug of beer at the table. We did order water, because we haven't quite yet gotten over the social pressure to order something - even though, unlike in the United States, water at restaurants isn't free! When she brought out water out it was super fancy - in a bucket with ice (like I've only ever seen champagne served) and she brought it with wine glasses. (Seriously, everyone drinks alcohol so they don't even have regular glasses).  We've only ever ordered water before, but we learned this time that we should have ordered it "flat" or "without bubbles" because we were brought sparkling water! I can't stand the stuff so Joel drank the whole bottle so we could get our money's worth. 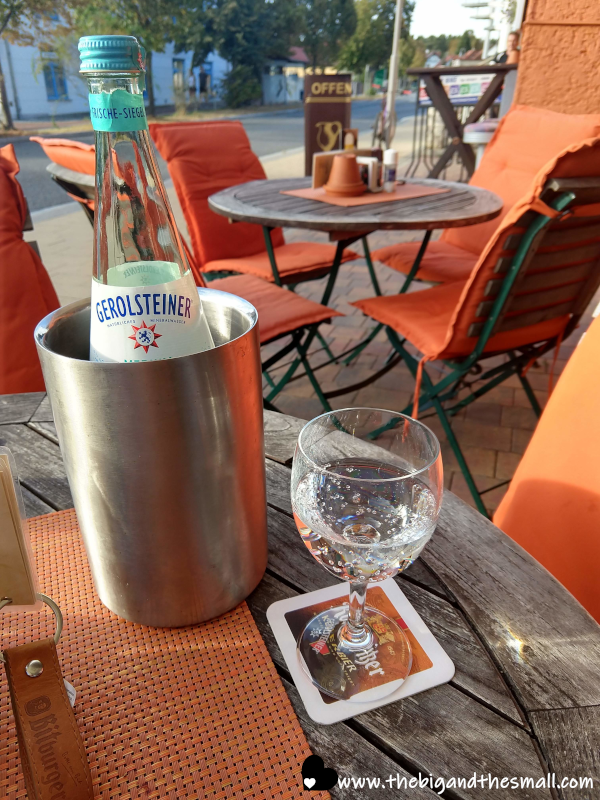 Other than the mishap with the water, everything was just about perfect. Before our meals came out we were brought a bread basket. There were two types of bread, one of which is my favorite European style - the crusty outside with the super squishy inside. I haven't had much of that here yet so I was happy to see it! The BEST part was the spread served with the bread. I really have no idea what it was except that it was super tasty. It wasn't a flavored butter, it had a very different texture. It had herbs, onion, and garlic in it which will make just about anything delicious. It might have been some kind of quark (a German dairy product) but again, the texture wasn't quite right. Whatever it was I should have asked, because I'd love to eat it again! 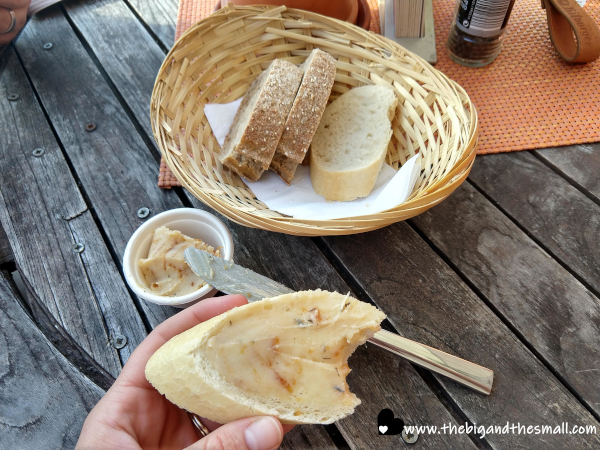 Shortly after we finished off the bread our meals arrived. We were super impressed with how fast the service was. The ribs were fall off the bone tender - they clearly know what they are doing here. Our favorite kind turned out to be the Opa Willis - the texture from the sesame seeds gave it a crunch I've never had on ribs before - but I liked it! The Reitzer ribs tasted similar to something we could get at home which was a little disappointing, especially because the split wasn't really half and half, we had far more of the Reitzer kind than the Opa Willis kind. In hindsight we wish we would have ordered the blueberry ones as our second flavor. Don't get me wrong though, it was all really good! We just like trying things we can't get at home. The fries on the plate look rather ordinary, but in person they were anything but! We both agreed they are probably the best fries we've ever had - perfect texture of crispy on the outside, squishy on the inside, seasoned with something yummy, and then dipped in mayonnaise! It sounds weird but don't knock it 'til you try it. 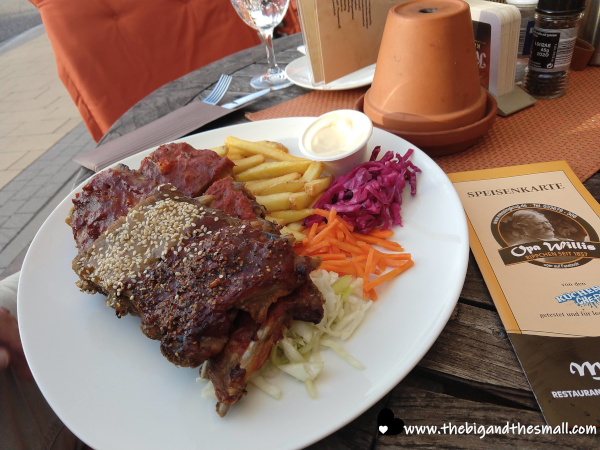 When I first looked at my burger I was little dumbfounded as to how I was supposed to eat this thing - it was huge! Joel told me to just squish it down and go for it!

Y'all, this is the messiest burger I have ever eaten in my life; between the runny egg yolk, the homemade burger sauce, and the slippery sauteed onions it was getting all over my hands and my face. I kept trying to put it down between bites so I could wipe my face and hands, which Joel informed me was a mistake. Eventually I just went for it! So messy, but so, so, good. Hashtag worth it. 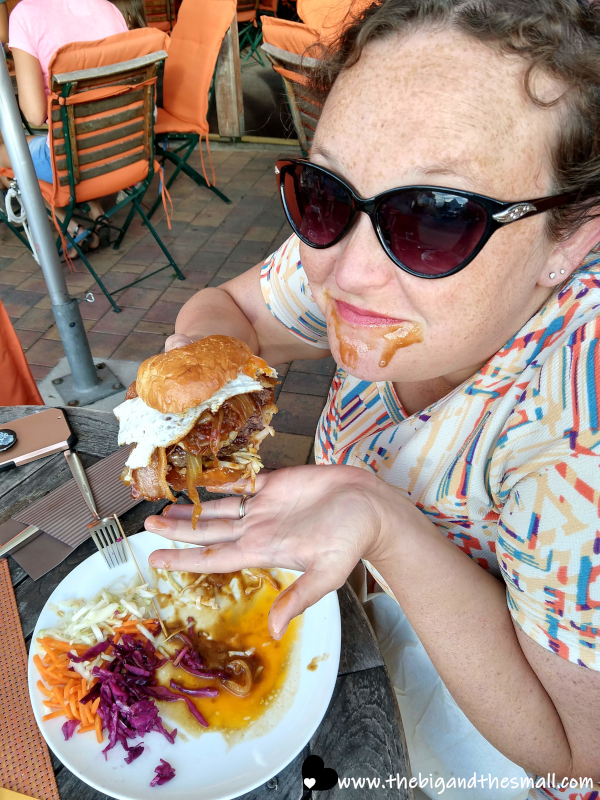 We really enjoyed our evening at the Messingkrug, and would highly recommend it to anyone who is ever in the area. The service was great, the food even better, and the atmosphere really relaxed and enjoyable. We are so glad we went, and again, grateful to Fred Lewis for helping us have a night on the town!

What's the messiest food you've ever eaten at a restaurant? Are you self-conscious about it, trying as best you can to stay clean? Or do you just go for it and dig in, not caring what others think? I need to work on that second part some more!