Fun at the Freizeitpark Wendisch Rietz

There are so many fun things to do in this small town! We took a second trip back to the place with the crazy challenging mini golf so we could check out all of the other fun attractions. 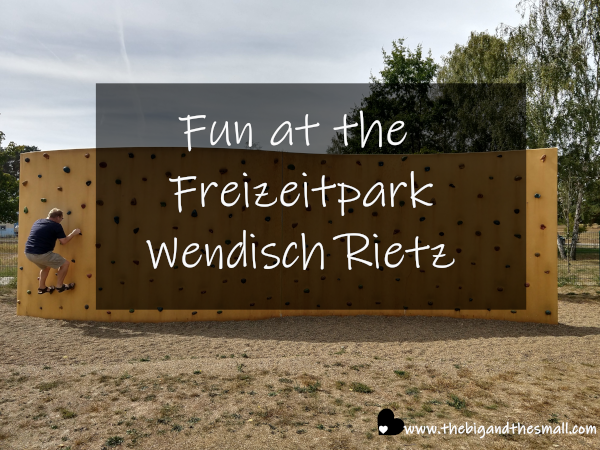 It only costs €3 per person for entry, which I think is a crazy good deal. A place with half the attractions in the US would easily cost twice as much. And there is so much to do here! If I had small kids and lived in the area we would be here at least once a week so they could run off their energy. After entry we made our way around the park in a mostly clockwise manner. This time we went on a Tuesday afternoon, and it was a lot quieter than when we went mini golfing on Sunday.

One whole section of the park is a small zoo. We were most impressed by the bear and the tiger. Those are big animals for such a small place - and they figured out how to let them live together in piece! 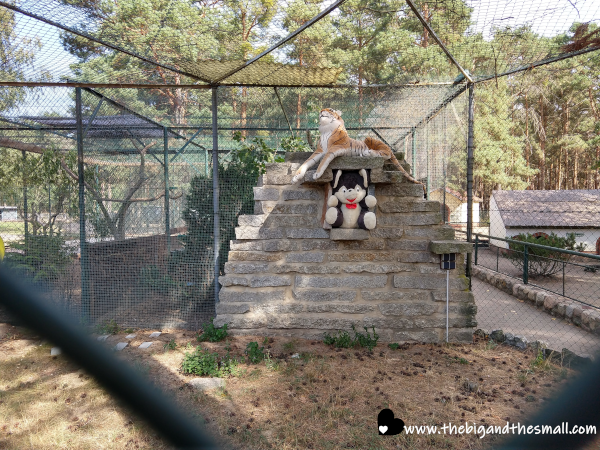 Ok, ok, so this one was, oddly, stuffed animals. I feel like at one point real animals lived in this enclosure... dangerous ones as this was the only one that was fully fenced off. But at some point they no longer had those animals and now a stuffed bear and stuffed tiger reign in here. It's odd, but humorous. There were actual animals in all the other enclosures, however.

The pigs gave us a little taste of home! Did you know that in Iowa pigs outnumber people 3 to 1? You can really tell when you drive down the highway and come across a pig farm... the smell will knock you right over! These pigs weren't that smelly and they were awfully cute. 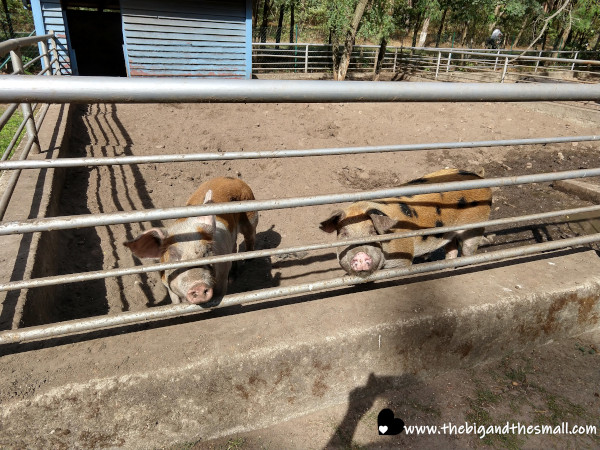 This goat kept cheesing for the camera, while all his siblings and friends stayed away. There were some baby goats, too, which are adorable animals but they move too fast to get a good picture. 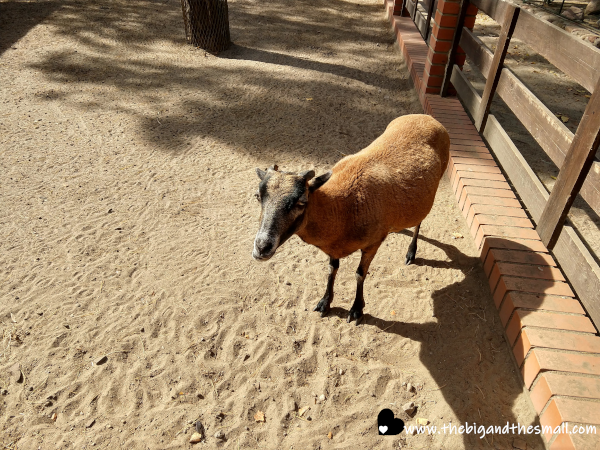 My favorite of all was this peacock and two peahens. The blue on the peacock was absolutely stunning; I could not stop staring at him. I can only imagine how beautiful it would have been if he had showed off his full plumage for us. 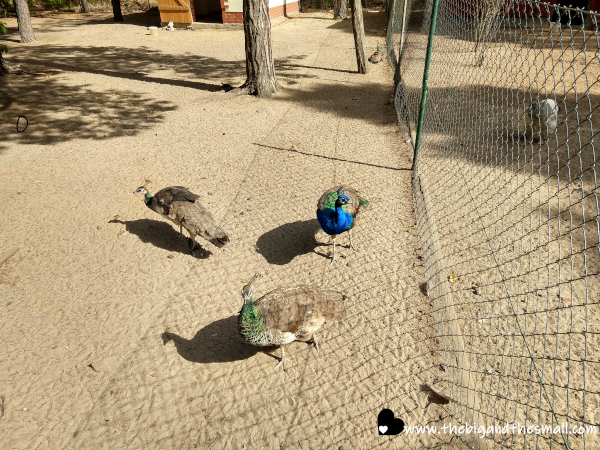 There were other animals as well - donkeys, ducks, chickens, alpacas, rabbits, and lots of birds. They all seemed well cared for and their enclosures were very clean and tidy. They seem to live happy lives!

After a quick walk through all the animals we went to the part of the park I'd been itching to get back to since I first spotted it on Sunday - the GIANT swing! There were a ton of kids here over the weekend so I was glad to have the place to ourselves on this weekday afternoon. When I say the swing structure is giant I am not kidding or even exaggerating. It is surrounded on each side by a climbing wall built out of tires and dirt, so you can get high enough to swing off. Here is a picture Joel took from the top of one of those walls, with me at the bottom for scale. 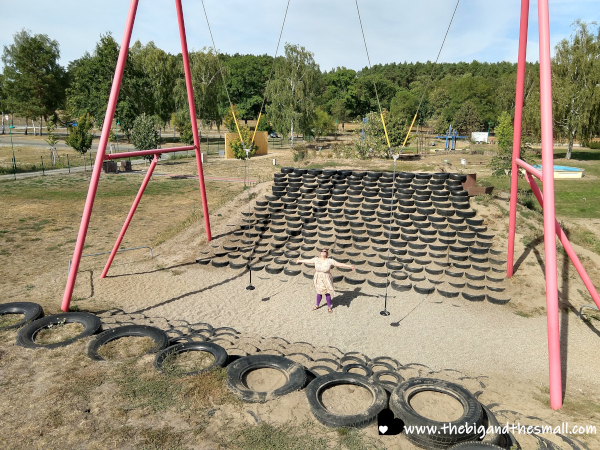 Swinging on this contraption was super fun - though a bit scary. I was only brave enough to climb up a total of four tire layers before jumping off; anymore and I was afraid I would just go a'tumbling down. The swing itself was just a small disc you sit on and then hang on to the rope for dear life! I would have been braver with my swing height had there been a real seat or handles or something, but it is pretty bare bones. 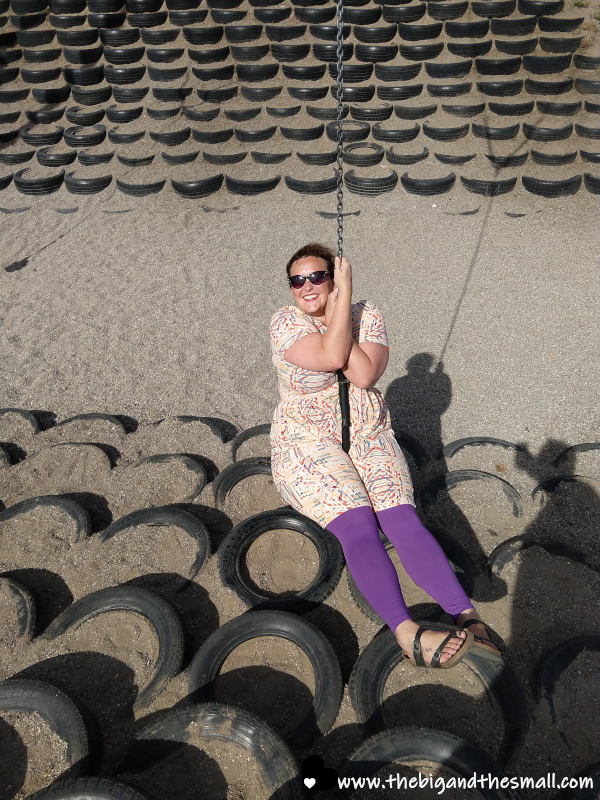 Joel was a bit braver than I, he was able to go up a total of seven tires before jumping off! 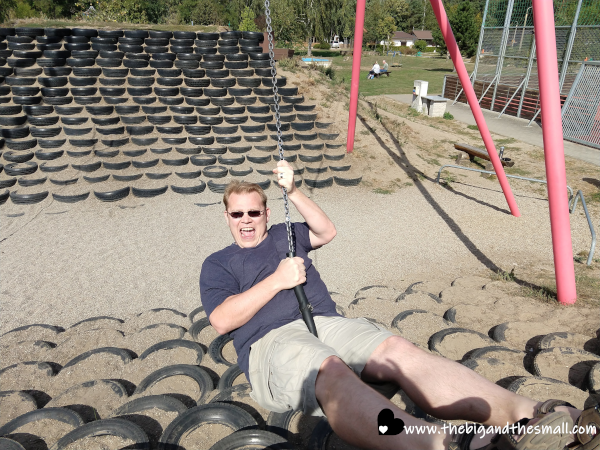 Just behind the swing is a nine pin bowling set up! This piece of equipment could use some work to make it really usable. The lane you roll the ball down has some uneven pieces that really affect the movement of the ball, and the return mechanism on the side has a break in the middle so your ball just falls off halfway and rolls to the middle of nowhere. It was still good for a few minutes of entertainment however! 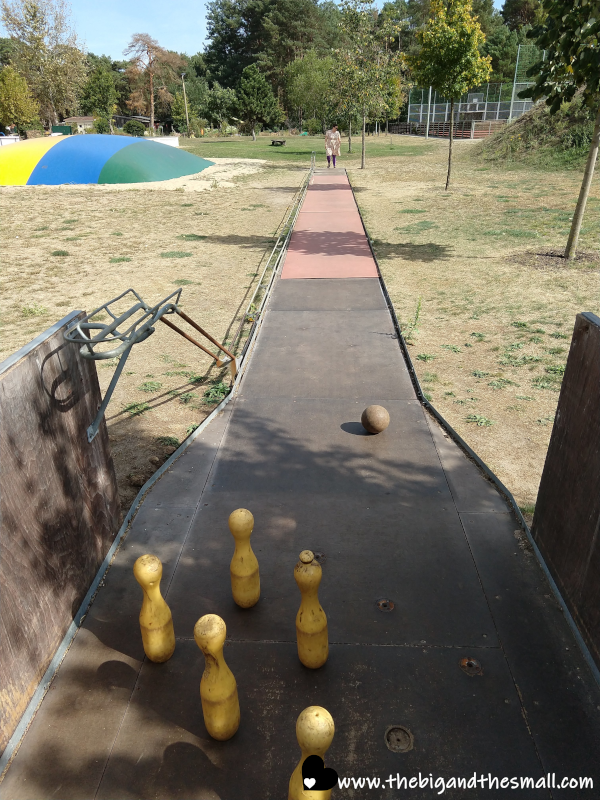 Joel, per usual, was much better than I, hitting all but 3 pins while I left 6 standing. 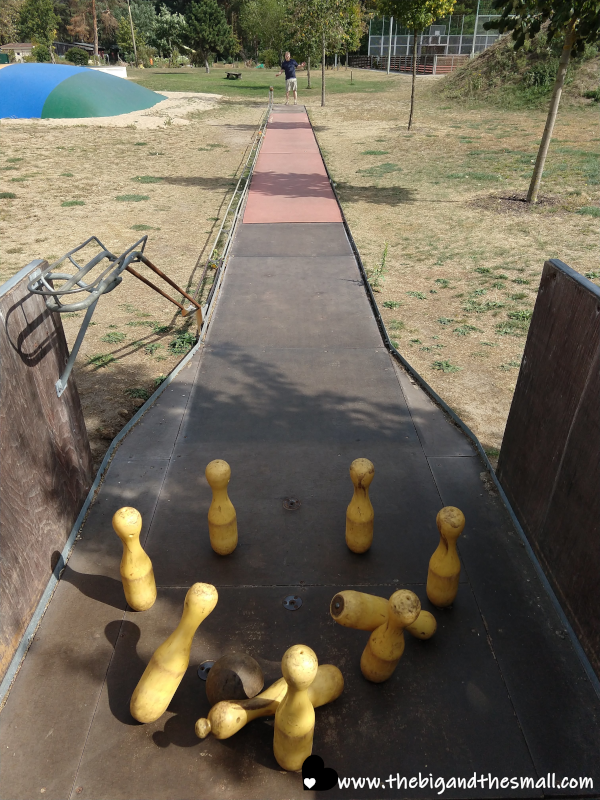 Next we went to my second favorite activity - what I call the jumping pillow! I have no idea if it has a more official name than that, but I love these things every time I encounter one. It's basically a giant pillow inflated with air, you climb up, and start jumping! I suppose it's kind of a less complicated bouncy house. This one was hot from sitting in the sunshine but I still managed to make it up and do some awesome jumps. Unfortunately Joel didn't catch any of my cheerleader worthy moves on camera so this is what you get. 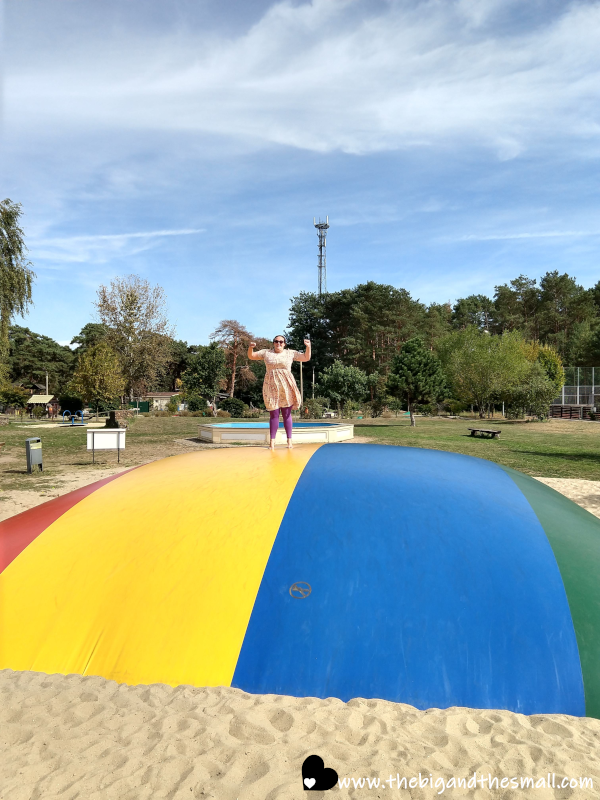 Joel was too chicken to jump on the pillow, but I suppose that's only fair because I was too chicken to do the next activity - the climbing wall! To be fair I had on sandals and a dress so I wasn't exactly dressed appropriately to be climbing up a wall. To be really fair, I wouldn't have done it anyway. But Joel gave it the old college try! He just managed to tap the top with his fingers once but I don't have picture proof so you'll have to take my word for it. 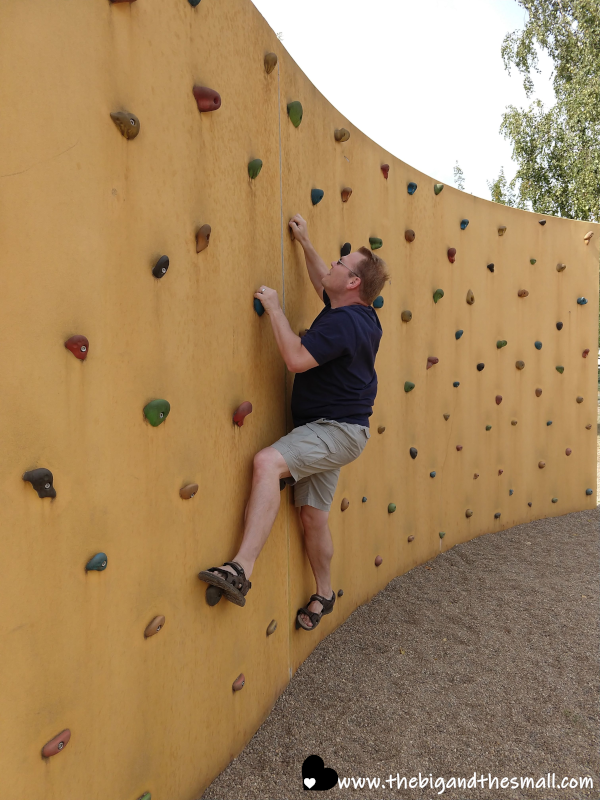 In addition to all of these activities there were two full playgrounds. The first was a wooden structure back near the animals. It looked really fun but we didn't play on it - I guess we aren't quite that young at heart. 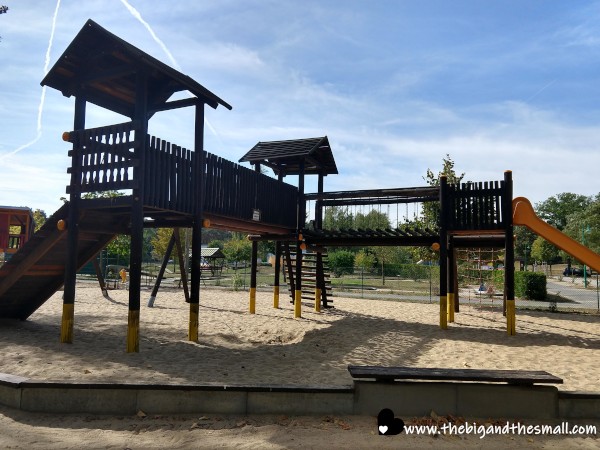 The second had an area with a water table and some sand digging activities, as well as the blue structure in the background which involved climbing up a net to get to the top of the metal slide. Both looked awesome but there were some kids playing in the water/sand area we didn't want to disturb, and neither of us were willing to risk a broken leg on the other one. 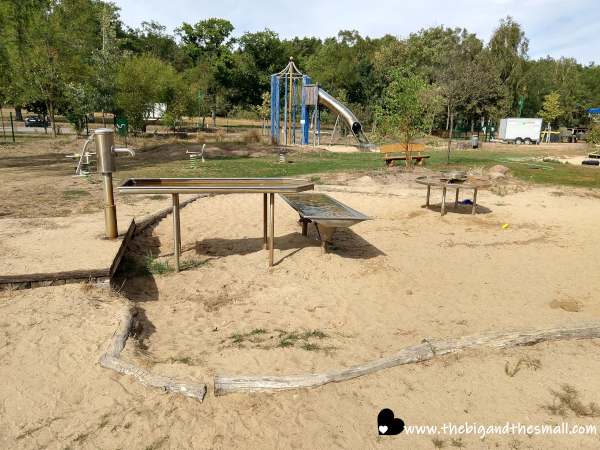 The final place we did play a bit was back near the restaurant on the grounds. We had to circle back around to it because there were some kids playing on it the first time. I've never seen a merry go round like it before - it was built into the ground! I can't decide if this made it safer or not... but it sure was interesting. I might have played on it a bit too much as I started to get a bit woozy. 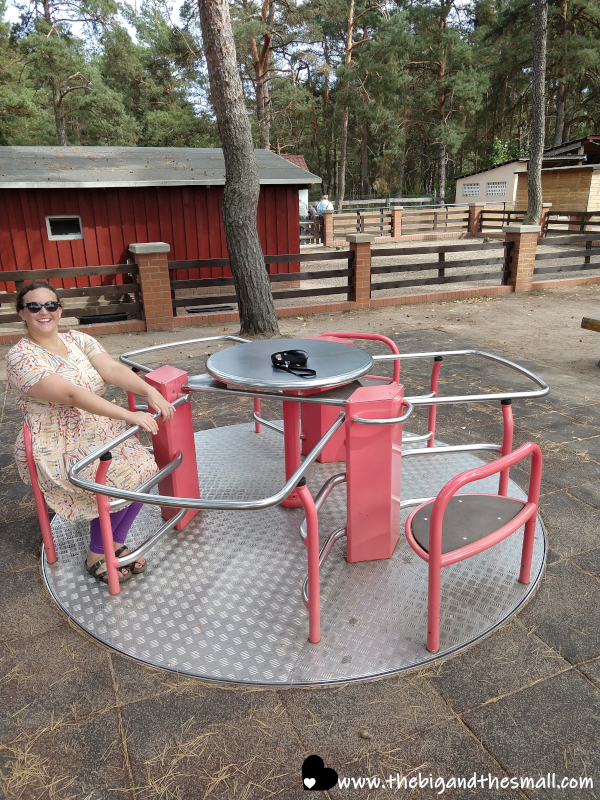 Joel played on it a bit longer, and eventually the most adorable German boy came over and wanted to play too. We let him hop on with Joel and the delight on his face was so much fun to watch as they started going faster and faster. He kept speaking to us in German, which of course we didn't understand, but eventually we worked out some hand gestures for "go faster!" and "slow down!". He played with us for a quite a while, and when we left he got bored and immediately returned to his grandparents. I didn't get a picture of him (feels like a violation to photograph other people's children without permission) so all you get is Joel. 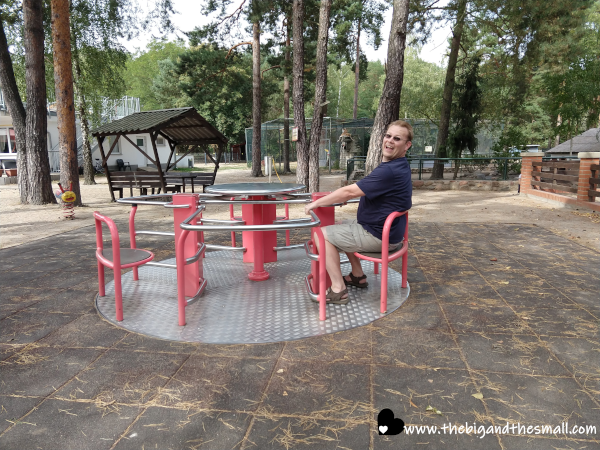 The Freizeitpark is absolutely an attraction that is not to be missed if you are ever in Wendisch Rietz. If you are adults on your own - go for the mini golf. If you have kids with you - go for everything! Make sure the kids have tons of energy to run off and you have a full day available so you can really enjoy it. It is fun for the whole family!

So, dear reader, which activity looks the most fun to you? The giant swing? The jumping pillow? Which ones would you skip? Let's hear it!