It turns out the humble town of Wendisch Rietz is a bit of a tourist destination! We are finding all sorts of fun activities to do here and plan to try as many as possible before our time is up. 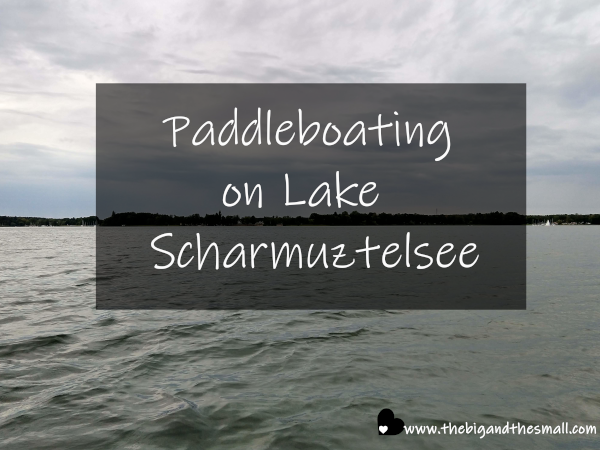 It took us a while to get to exploring for a few reasons. We spent more time hanging out with our host family as they ended up leaving on Tuesday instead of Sunday like originally planned (life with small kids, amiright?) After that we were getting our feet under us with the routine for the chickens, and still recovering sleep from our unexpected overnight stay at a Berlin McDonald's. So it was the end of our first full week here when we finally got out to explore and realized - holy cow there is a lot to do here!

Mary mentioned the lake to us in passing, but didn't really elaborate on how awesome it is, and she totally forgot to mention the amusement park and mini golf just a short walk from the house! I suppose when you live somewhere for a long time you forget about the things that are really fun to outsiders since you just get used to them. No worries, we have plenty of time left to take advantage of all the super fun activities around here - I made a list! Yesterday we got to cross something off the list - paddleboating on Lake Scharmüztelsee! 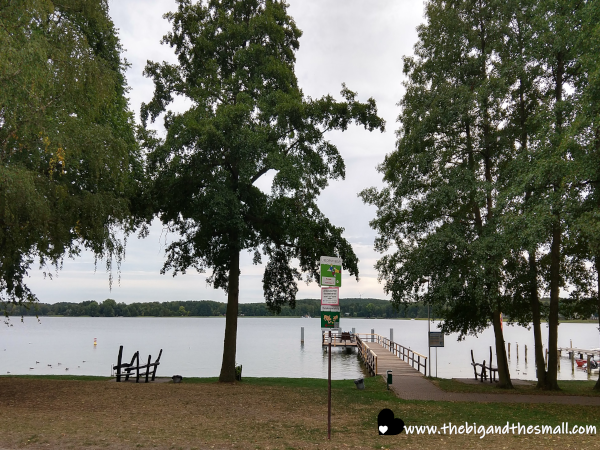 This huge, gorgeous lake is about a fifteen minute walk from our house here in Germany. We sorta stumbled upon it when we were out for a walk on Saturday. We were walking by the canal originally and saw some people boating when I said "man, I want to be out on a boat!" Joel, ever one to indulge my whims, looked up where we could rent boats in the area. This led us to the lake shore where there is a great rental place with paddleboats, canoes, sailboats, and even some small speedboats! 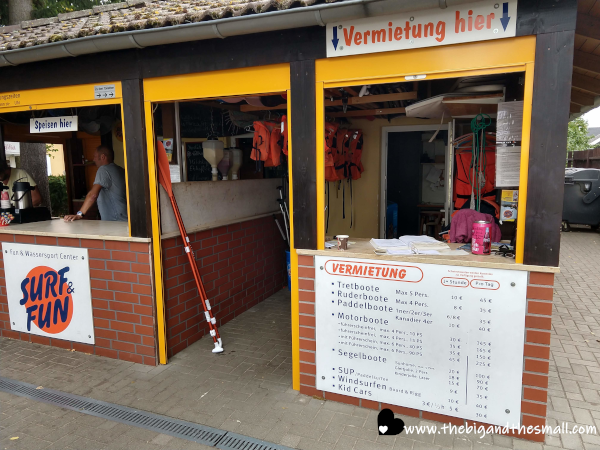 Saturday was, of course, too busy and there were no rentals available, so we planned to return on a weekday. When we went back yesterday afternoon we practically had the place to ourselves! I mean, that could have something to do with the impending rain, but also it was a Monday. We had a bit of a misunderstanding at first about what type of boat we wanted to rent. The sign says "paddleboat" so we assumed that was what we know as a paddleboat - the kind where you pedal and it turns a paddle to move you through the water. 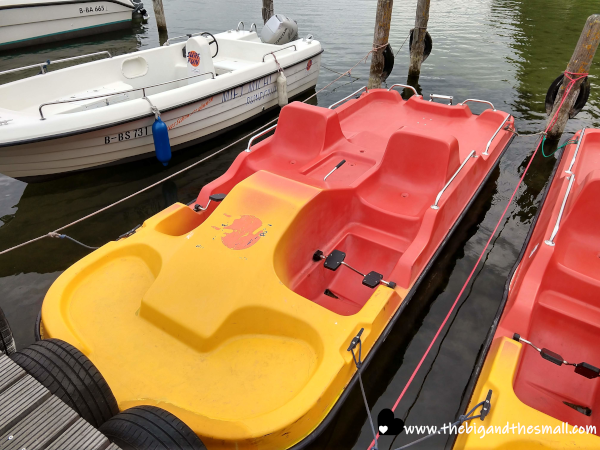 Turns out that in Germany, that kind of boat is actually called a "tretboote" and the one called "paddelboot" is what we know as a canoe. Which makes sense since you actually paddle a canoe with oars. A quick hop onto Joel's Google translate app helped us tell the staff which type of boat we wanted to rent, and after handing over €10 cash we were on our way! 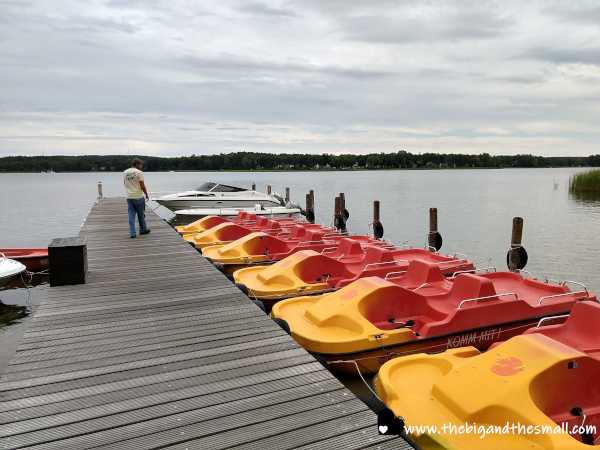 Of course I couldn't resist a selfie before we took off. One of the reasons we chose the paddleboat over canoe is that these things are a lot harder to tip over. We knew we would have our phones with us for pictures and we can't risk losing one to the water! 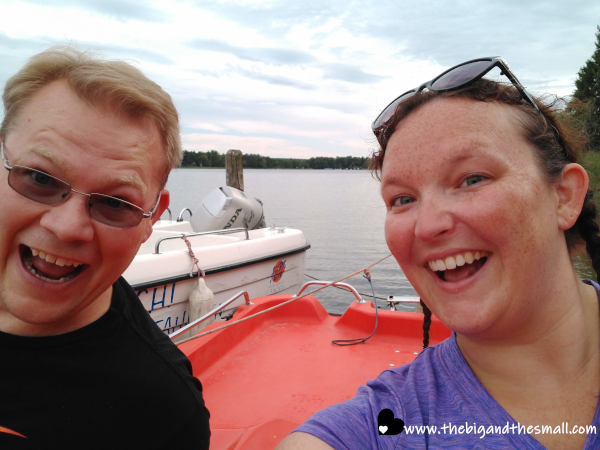 The €10 we paid got us the boat for one hour. Joel wanted to do more at first, but I convinced him we should start with an hour, and after just a few minutes of pedaling he conceded I was right. It is hard work! All that hard work was worth it though for views like these. 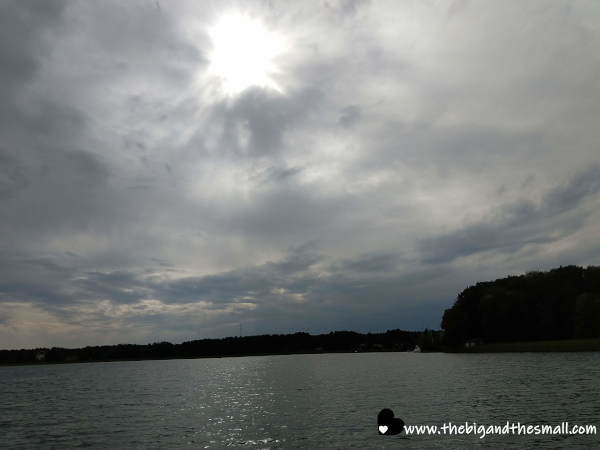 Our general plan was to cross to the other side quickly, then paddle down the shoreline. We admired the houses on the shore, and scared off some ducks as we moved through their area. We also came across a lone boat with a fisherman...who was not wearing any pants! We didn't get super close so I don't think he saw us but, uh, we saw him! On Saturday when we walked around the lake we saw three naked people... so apparently that's a thing here. I told Joel I want to move to Germany so I don't have to wear pants anymore. Here's another view of the lake since I didn't take a picture of the pantsless guy for you (you're welcome). 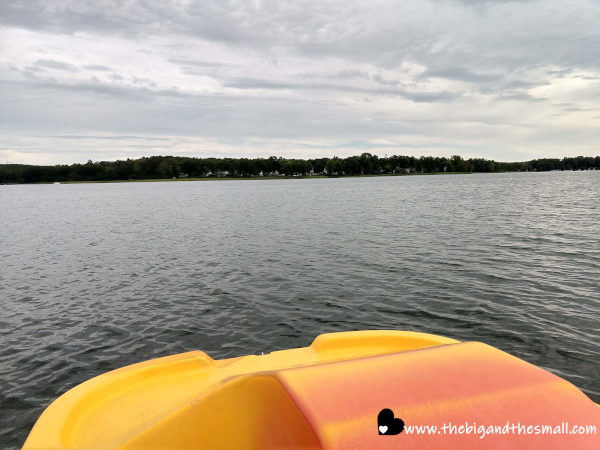 When we looked up (to avoid looking at Mr. No Pants) we spotted some beautiful birds flying overhead! They actually came really close to our boat and a few landed on the water nearby. That was one of the perks of being in the almost silent paddleboat, we could get fairly close to wildlife. (Except for the ducks, they were too smart and flew away). 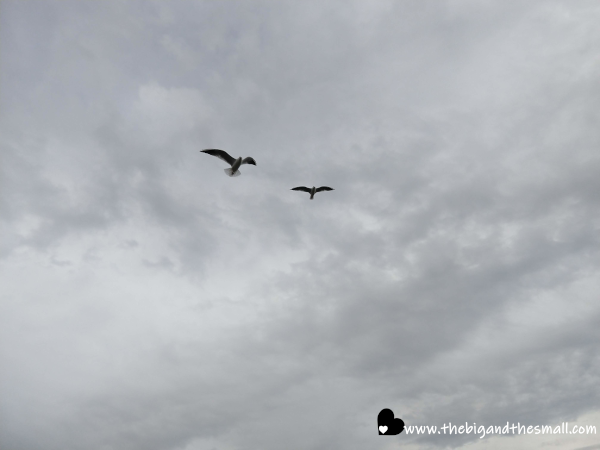 We spent most of our hour paddling around in a large circle, eventually turning to make our way back to the marina. The weather was cloudy but warm, with a bit of a breeze. Really it was perfect. If the sun had been shining directly it would have been too hot for my taste! A few times we stopped paddling and just floated in the lake, enjoying the scenery. It was magical. Eventually, though, we noticed the skies were getting darker. 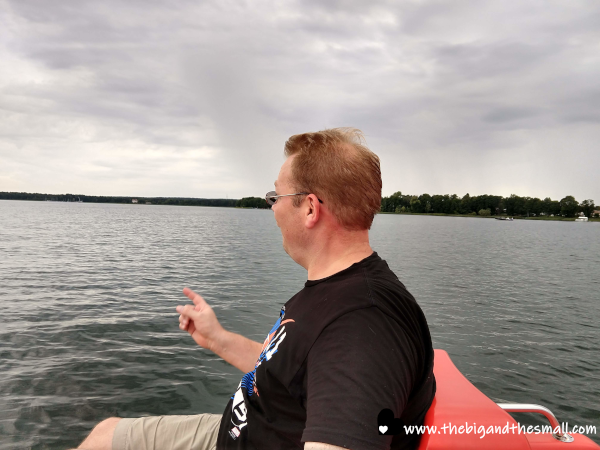 Joel consulted his phone and it told us we had 120 minutes until rain in our area. But it hadn't updated for 36 minutes. Then all of a sudden it told us we had 13 minutes till rain in our area. Ok, well, we were pretty close to returning so we decided to pedal faster. Then about two minutes later it said we had five minutes till rain, then a minute later it was raining on us! Thankfully it was more of a sprinkle than anything. I think the storm skirted us just enough that we avoided the real downpour. Really we don't mind getting wet, we were just worried about our phones! (Oh technology, a blessing and a curse).

We made it back to the dock just a few minutes after our hour was up and without getting soaked. The walk home was a bit tough because our legs were sore! We've been walking a lot since we've been abroad but apparently this uses different muscles. I can't wait to see how sore we get after we rent a tandem bike later this week! (Oh yeah, that's happening).

So what's your favorite way to be out on a lake? Paddleboat, canoe, pontoon? Or are you more of a speedboat person? Or perhaps you avoid the water altogether? Tell me all about it!

Rain and phones do not Mix

I giggled at the pantlessman in the boat and your response. I remember body coverage having a very different standard in Germany than the US. :)

Last Tuesday, my phone was wrecked by a rogue rainstorm. It died a quick death overnight, never to turn on again. Thankfully, I just used my phone insurance and it was replaced in 48 hours (thus why I had to text for your new number - I guess it had stopped backing up to the cloud) so yes, guard that technology closely.

Haha yes, very different! Drinking is different here too - we see people walking and biking around with open beer bottles all the time! Can't do that in the US.

Such a bummer about your phone! But yay for phone insurance. I don't think we have that... so we will guard ours very closely! I think the little purselet I've been carrying is water resistant, but I don't really want to test its limits.