McDonald's Around the World: Berlin, Germany

Welcome to part four of our series about McDonald's Around the World! (If you are curious we have also been to and written about McD's in Austin, TX; Paris, France, and Paphos, Cyprus). Our visit in Berlin had kind of a dramatic twist - we didn't just eat at McDonald's, we spent the night at McDonald's! 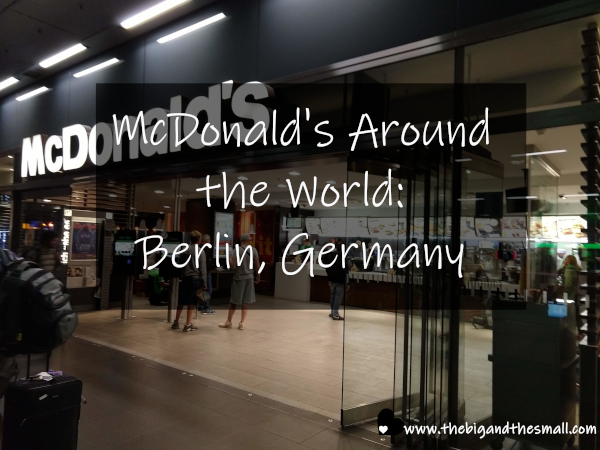 The whole crazy story of our trip to Germany can be read about here, but the short version is - a tight flight schedule and a missed bus got us to the major train station in Berlin well after the last train for the night had already left. We arrived around 11PM and the next train to our destination wasn't until 6:31AM! This left us with three choices: 1. Find a last minute hotel 2. Rent a car and drive to our destination ourselves 3. Find somewhere to kill 7.5 hours until the next train.

Perhaps normal people would have gone for options 1 or 2. We had passed many hotels on our way to the train station so there was no shortage of ones close by. However, we had researched hotels before this trip, thinking we might choose to spend a day in Berlin, and the hotel prices were outrageous! Even on the discount sites Joel is a master of, the cheapest he found was €80 for a 1 star joint. A last minute walk-in could go either way price-wise but I wasn't willing to risk it, I am far too cheap frugal. Renting a car might have been another good idea in advance... but at 11 o'clock at night I don't think there was anywhere open for us to get one. Granted, we didn't look, but I feel safe in saying we wouldn't have found anything.

So option 3 it was! I was actually really grateful to spot the familiar golden arches because I just knew it had to be a 24 hour one (McDonald's knows how to make that money!) and I knew we could get away with spending the night there. It wasn't quite as easy as I had hoped, we had to keep moving around the restaurant as they closed down sections for cleaning, but still, it wasn't the worst thing ever. Of course, it also wasn't a great night either. Neither of us really got any sleep other than 15 minutes here or there, and by morning we were exhausted. But we survived, we saved money, and now we have a great story to tell!

This McDonald's in the train station was a pretty nice place with a very modern interior, more along the lines of a trendy cafe than a regular McDonald's. I was grateful for seats that were slightly comfier than we might have found otherwise! Also, it was kind of crazy how busy this place was all night long. Half the time there was a line out the door and there were times when it got fairly crowded! We weren't the only travelers that took advantage of the hospitality offered here throughout the night. 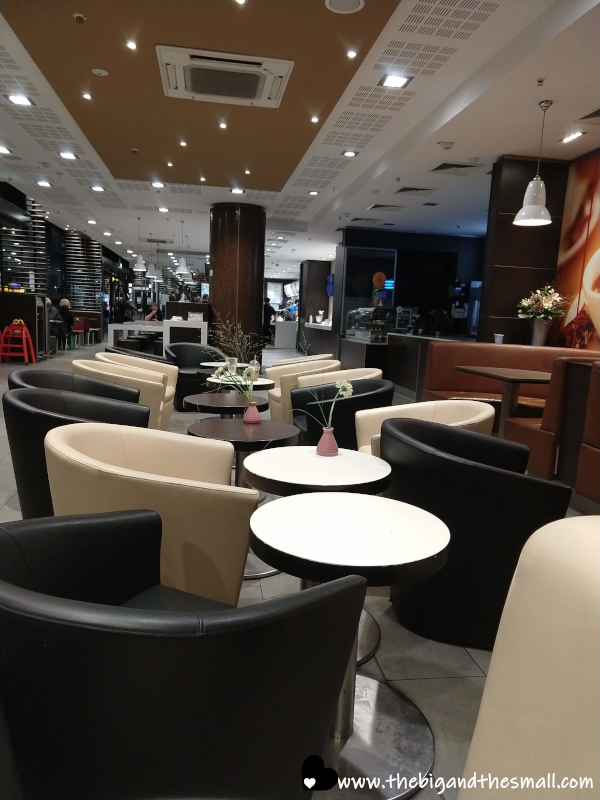 Of course we couldn't spend the night in McDonald's without getting any food, so I'm here to fill you in on everything we tried. Every time we go to a new McD's we try to pick items on the menu that we haven't seen before, and especially ones we haven't seen in the US! Our first order was two small sandwiches - a burger that actually was pretty normal (it tasted like home) and a spicy chicken sandwich. This spicy chicken sandwich was different from ones I've had at McDonald's in the past. In my experience it's usually the breading of the chicken that is spicy; in this case, the sandwich had a spicy chili oil sauce! I enjoyed it although it was quite a shock to the taste buds at first. 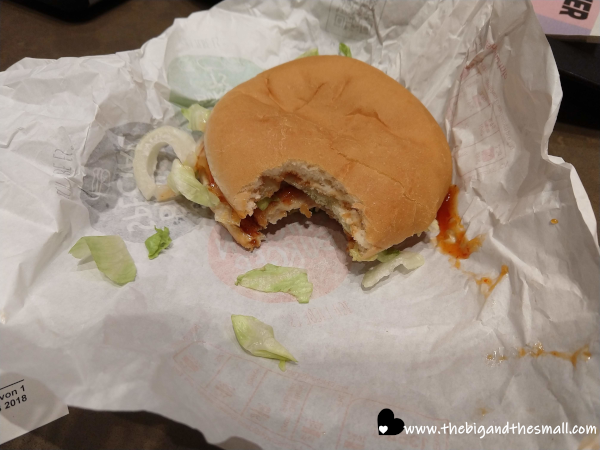 Our second order was placed around 2am, and we went with two bigger sandwiches this time. Germans must love spicy foods because we got another spicy choice - called a McDouble chili cheese. Joel was really excited to try this one. Or he might have just been delirious with exhaustion, I'm not sure. 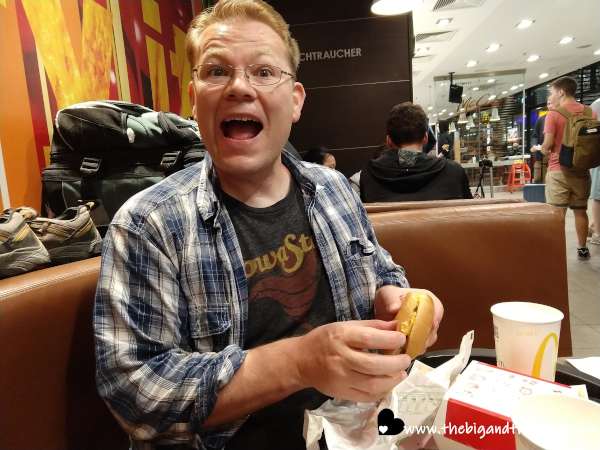 The McDouble chili cheese was a burger with a nacho cheese sauce, and three pickled jalapeno slices! It was definitely a kick in the taste buds. I enjoyed the cheese sauce (I've never met a cheese sauce I don't like) but the jalapenos were a bit much for me, so I made Joel eat the half with those and I finished off the rest of the sandwich. The only thing that would have made it better? More cheese sauce! (duh) 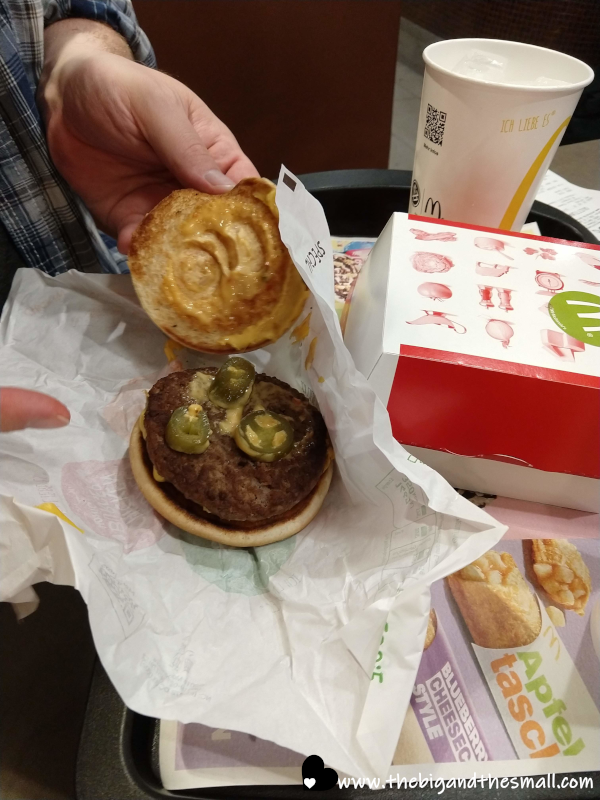 The second big sandwich was called the Grand Bacon Cheese. It was a huge burger on a ciabatta type bun, with bacon, a white cheese, tomato, and tons of mayo. Honestly, it tasted almost exactly like a Frisco burger from Hardee's (Joel's favorite burger from his favorite mainstream fast food joint back home). The only real difference is that the Frisco is on sourdough, and this was on a ciabatta bun. It was pretty darn good, although I think they were a bit heavy handed with the mayo. (Of course while I think food can always have more cheese sauce, Joel thinks there is always room for more mayo!). 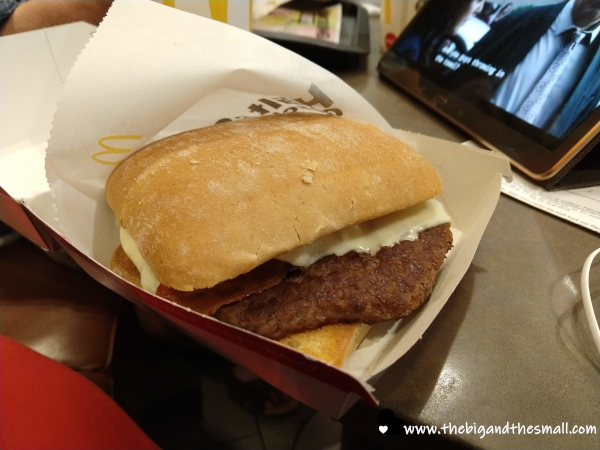 We had planned to get breakfast at some point as well, but by the time 6AM rolled around we weren't really hungry and we just wanted to get to our train. We are so grateful for this McDonald's being our port in the storm of our travels. The food was good (for a McDonald's), the seats were mostly comfy, and the bathroom was clean (although they do charge you €0.50 to use it). Without this place to land I really don't know what we would have done for the night! (Spent more money I guess). I can't say I'm itching to spend the night in McDonald's again any time soon, but I am happy to know it's there when I need it.

So what did we try that sounds good to you? Would you like more spicy options at McDonald's? Would you ever spend the night in one instead of getting a hotel or trying to rent a car? Surely we aren't the only crazy ones out there. Tell me all about it!