On one of our last days in Cyprus our hosts have returned and offered to take us somewhere on the island we hadn't made it to by bus. We chose the St. Neophytos Monastery and we are so glad we did! 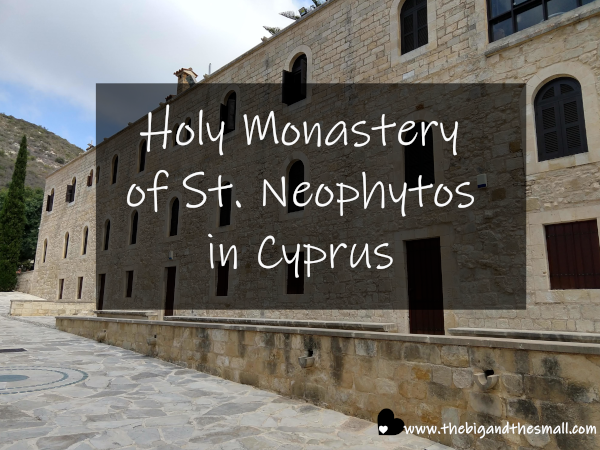 I've had a special affection for monasteries ever since I lived at one for two months in 2009. It was the summer between my second and third years of seminary, and all I really knew was that I wanted to get out of Georgia for the season (one blazing hot summer there was enough!). When I saw a flyer for a student program at Holy Wisdom Monastery just outside of Madison, Wisconsin I jumped at the opportunity. Going north for the summer? Yes! Getting to live in a monastery, participate in prayer life, and take care of the land? Sounds great! It was one of the best experiences of my life and someday I'll write all about it. But today is not that day. Today I want to talk about the monastery we saw in Cyprus. 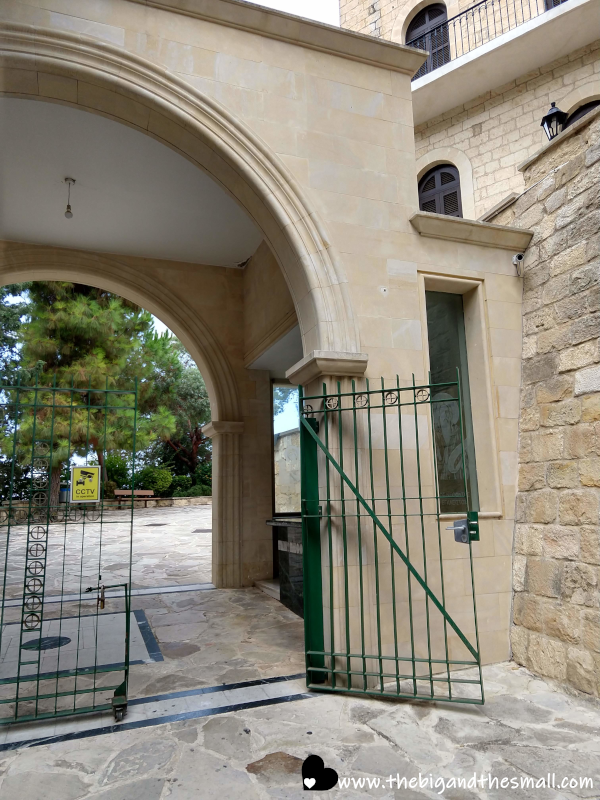 From where we have been staying it was about a 40 minute drive to the monastery. (By bus it would have taken us closer to an hour and a half). The drive wound through cute little towns and up into the mountains. At one point my ears were popping! When we arrived even the parking lot was serene and majestic - all stone pavement and tall trees. We walked slightly uphill through the entrance to the monastery and onto a wide stone walkway with trees on one side and buildings on the other. 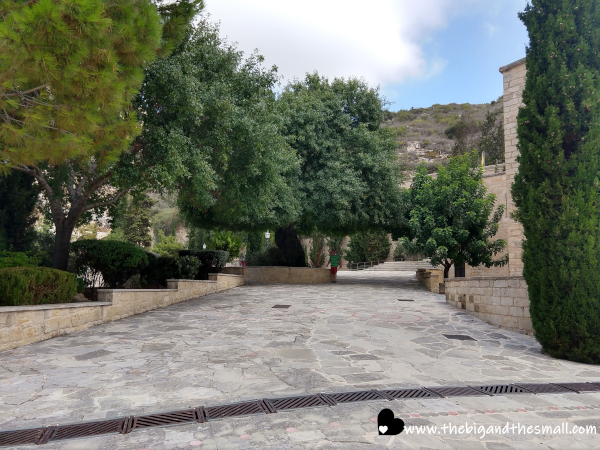 As we continued moving onto the grounds, we looked over to the left and the view almost took my breath away. I can see why someone decided to come up here and stay forever! The monastery is still functional, so this garden is tended by the monks and feeds the monks. I was excited (as usual) to spot some corn way in the back! (I'll always be an Iowa girl at heart). 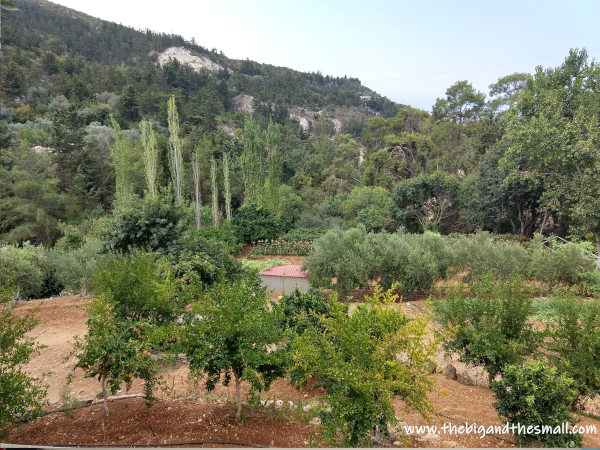 From looking at the garden we turned to the right and way up on the side of the mountain, carved into it, we could see two doors and a spiral staircase leading up to them. I love anything that takes me higher for a better view so I immediately wanted to go over there. We walked that direction, marveling at all the beauty around us on the way. 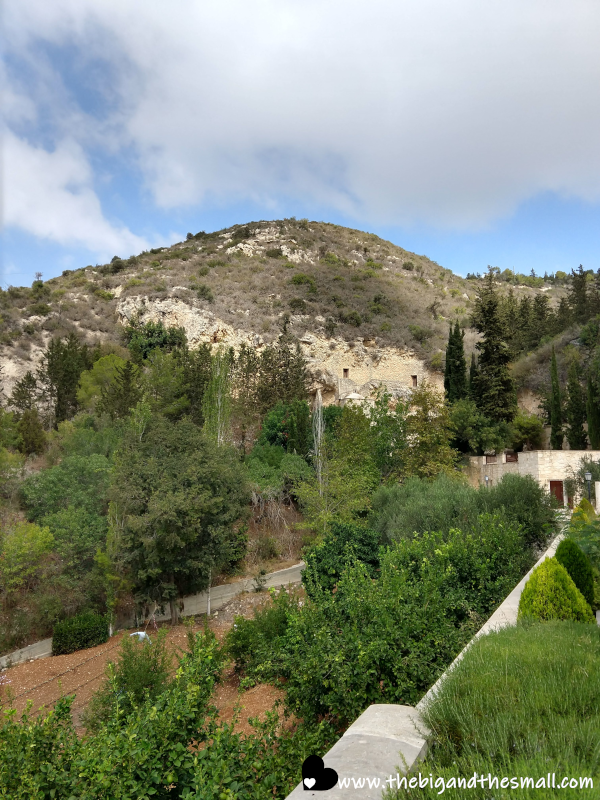 As we got closer we could see that below the two highest doors another structure had been built. The whole structure is called the Engleistra of St. Neophytos and consists of the church of the True Cross, the cell of Neophytos and the refectory. When you go up the stairs you can pay a €2 entrance fee to go into those three areas. 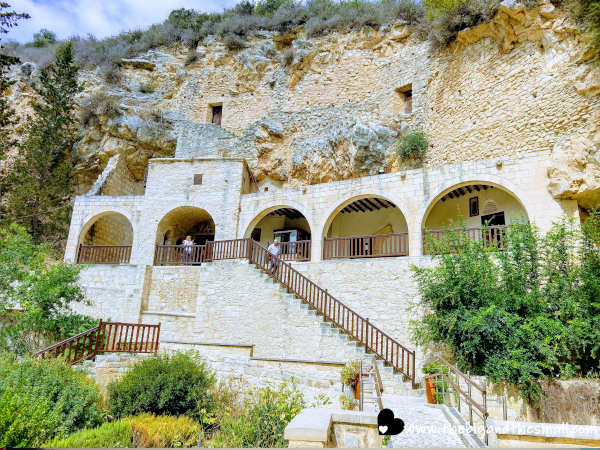 We paid the fee so we could go into see these ancient spaces, but unfortunately no photography is allowed. I did get one picture of the outside and you can see a bit of the paintings inside. The space was small both in depth and height, at certain points Joel had to duck. Most of the walls were covered with religious paintings, many of them dating back as far as 1183! They were faded in a lot of places, and we noticed that in many of the depictions of saints and disciples the eyes in particular were scratched out or gone. There was an altar area with a sign that said only clergy were allowed to touch it (and I'm assuming they mean Greek Orthodox clergy not us Methodist heathens). We even saw the incredibly humble space that Neophytos actually lived! The door that was the exit was super short, even I had to duck to leave that way. 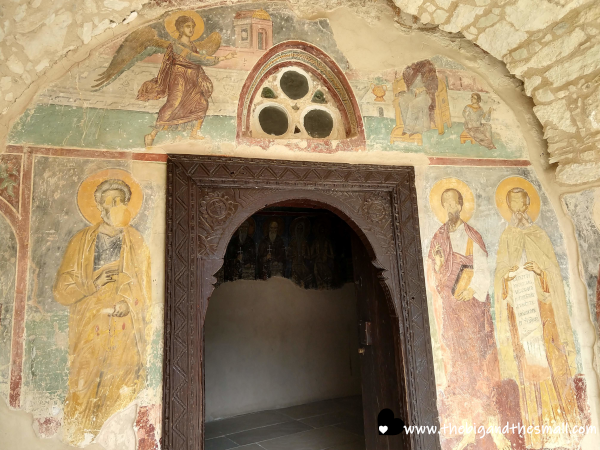 Once we stepped out you can see again how stunning the view is. In the distance in the left of this photo you can see the church that was constructed on the monastery grounds long after Neophtyos' death. The church was built sometime in the 16th century. (Bonus: in the bottom left of the picture you can see Paul and Anne, our hosts here in Cyprus!) 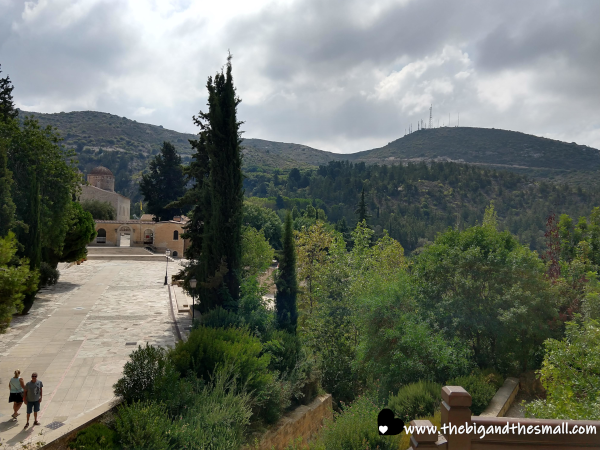 I was slightly disappointed that we didn't get to go to the highest two doors carved into the mountain. Though there are stairs leading up there, the staff person told us that part has been closed off for over fifty years due to safety reasons. So next we descended the stairs and headed over to the church. Again we were not allowed to take pictures inside so I only a view of the entrance. The inside was stunning - marble floors, gold and silver and beautifully painted icons, and another sweet spiral staircase pulpit. 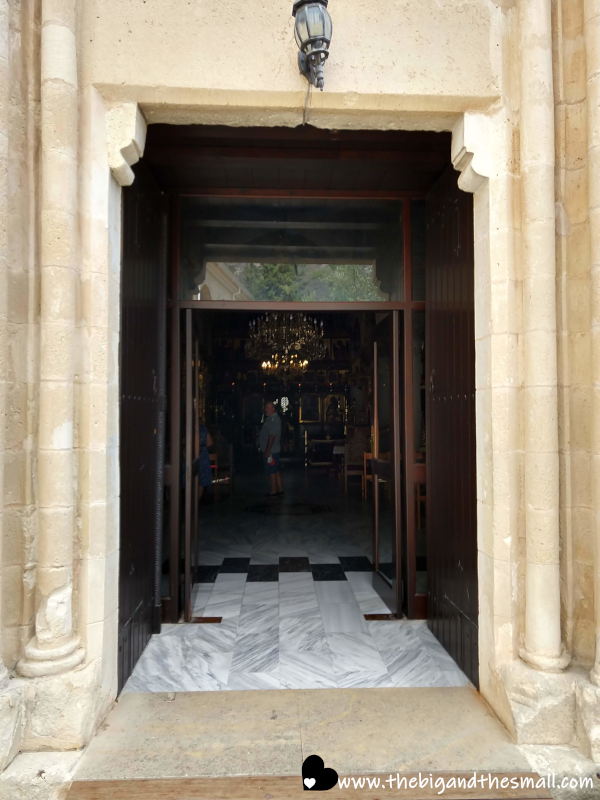 This church also contains the actual remains of St. Neophytos himself! There is an ornate casket that contains his body, while his head is enshrined separately at the front of the church. Our hosts told us that several years ago they come up her to show some friends the monastery, and just happened to arrive on the day that Neophytos' casket was opened for the first time in centuries! People had come from all over the island to show their respect and it was a really sacred time. It was open for only two hours, then closed again, and no one knows when or if it will ever be opened again! 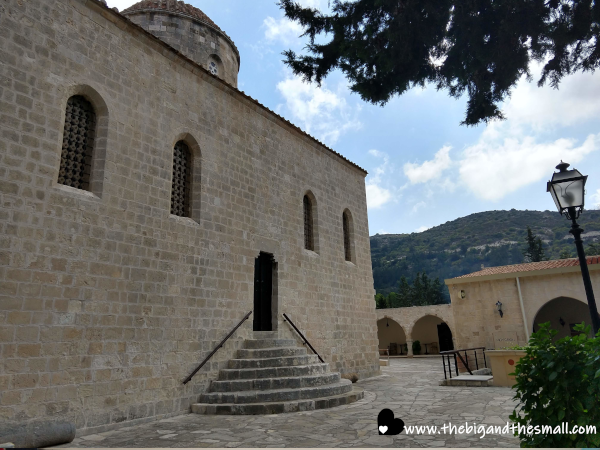 Surrounding the church are several dormitory like buildings where the monks live. Though the monastery is active we did not see any monks while we were there. We left before noon when we likely would have seen them going to the church for worship. 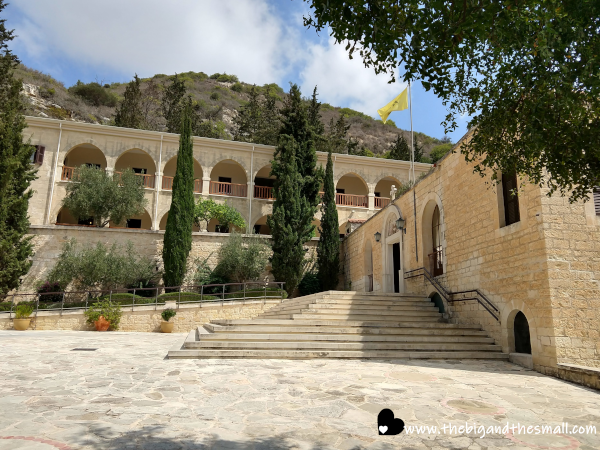 Outside of the church there was a really interesting mosaic inlaid in the ground. It is of a double headed eagle holding a staff in one hand and a round object topped with a cross in the other. A quick Google search tells me the double headed eagle was a common symbol used by the Roman and Byzantine empires. 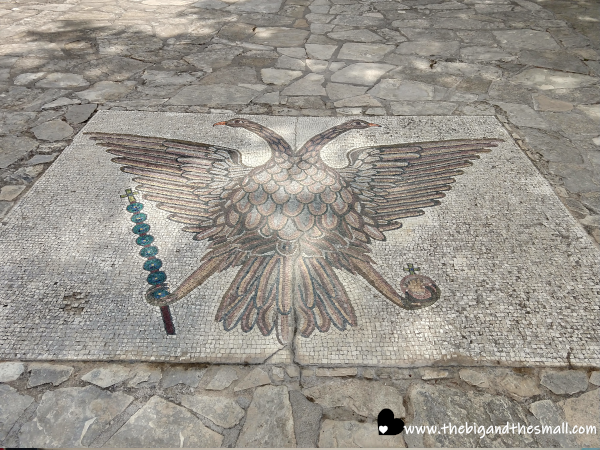 One other interesting part of the grounds was a small crypt you could take stairs down into. It was a small empty cavern except for a shrine at one end of the room. Propped up on a stone ledge was an icon of the Virgin Mary holding the Christ child. What I found puzzling was everything piled in front of the icon - a ton of hair ties! There was no discernible meaning to this offering, but it definitely seemed intentional. 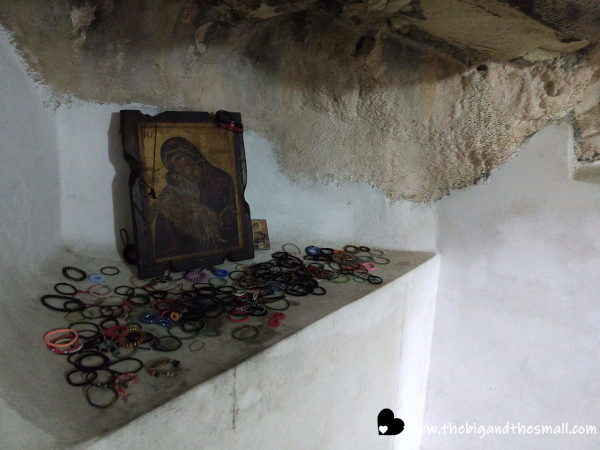 We did tour the museum on the grounds, but again no photography was allowed. They have scrolls and Bibles and religious artifacts dating back to the 10th century. It was fascinating and I wish I could have captured some of it for you all! What we were able to capture was a rare picture of Joel and I together since we had our hosts with us to take a picture, so I will leave you with this gem. 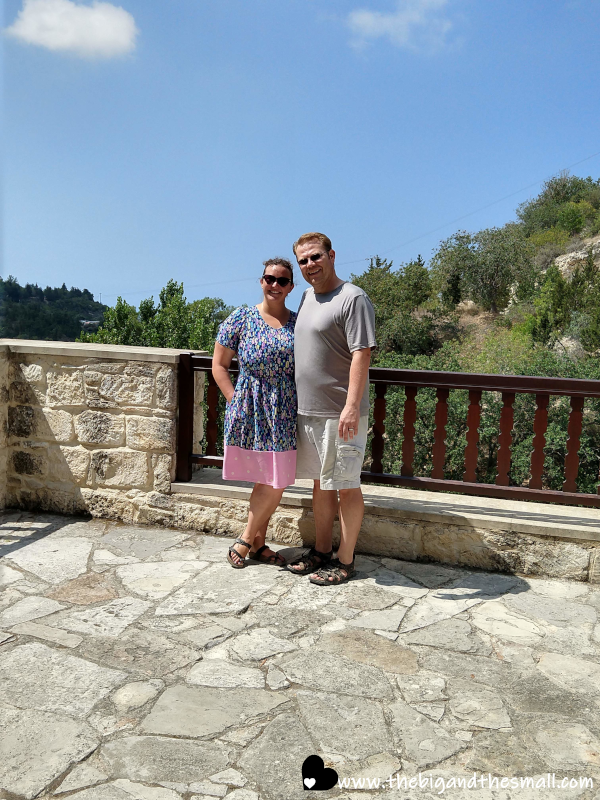 Thanks for coming along on this visit to the monastery with us!

P.S. If you want to learn more about St. Neophytos himself this wikipedia link has some great info!