If you are just tuning in you can catch parts one and two of the bus trip here and here. In part three of this trilogy, our heroes have returned triumphantly to the city of Polis and now have 3.5 hours to kill before the first return to bus to Peyia, their place of refuge. Here is what they get up to during that time. 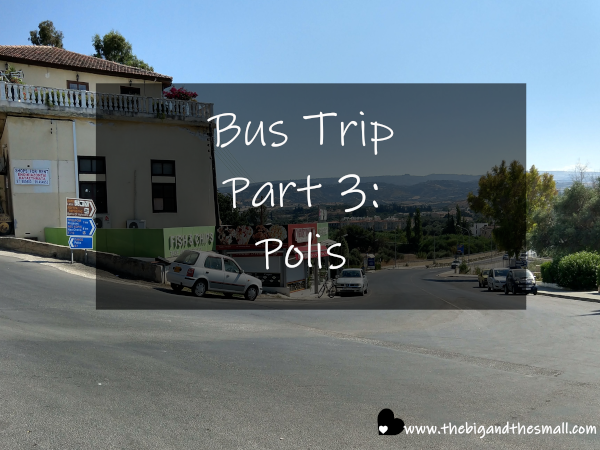 We got off the bus into the sweltering heat around 1:00, and the first thing we needed to do was look for sustenance. We were hot and thirsty and had just returned from not getting to bathe in the baths of Aphrodite. Our swimsuits were sitting in our backpack just taunting us. We got excited when across the street from the bus station we spotted a surprise - a Coldstone creamery! (see background of the photo above). I had no idea Coldstone was outside of the U.S., let alone in Cyprus, and some refreshing ice cream sounded perfect just now. Unfortunately... it was closed. So instead we walked a few blocks to find a small kiosk where we purchased very large bottles of water. We then consumed most of those while we wandered the other direction into town looking for food.

We happened to find a part of town that was off the beaten path, you couldn't get there by driving, only walking. The streets grew more narrow and the shops and restaurants were closer together, providing some blessed shade. We passed a few cafes before we were sucked in by the sign on this one that promised crispy bacon rolls! Um, yes please! 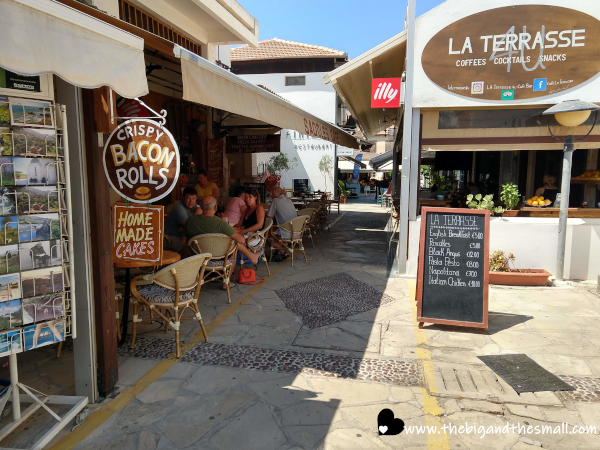 We sidled into the Saddles Cafe and grabbed a spot in the shade. One of my favorite things about Cyprus is that being in the shade is actually cooler than being in the sun. When I write that down it sounds kind of silly, but we are from Iowa, and in Iowa summers, going into the shade doesn't really do much to save you from the heat because it is the humidity that is so oppressive. Here in Cyprus, as long as you have some shade and a breeze, it can actually feel a good ten degrees cooler. As we sat down a waitress quickly came over to take our order, and I got a full English breakfast while Joel ordered one of the aforementioned crispy bacon rolls. 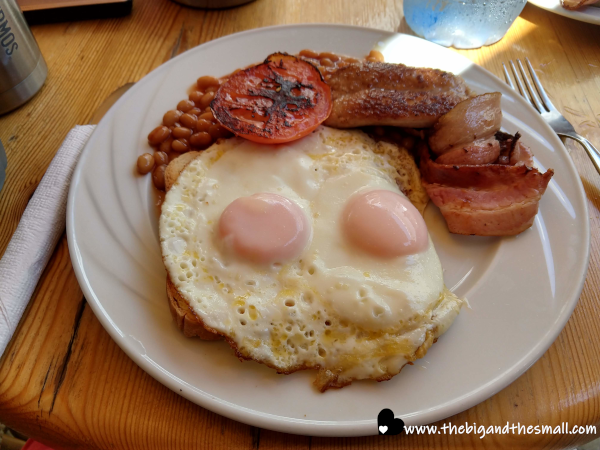 My breakfast was delicious, the eggs were cooked perfectly, the sausage was tasty, and it was just all around great. Joel's crispy bacon roll was a bit of a disappointment. It was literally just bacon on bread. No sauce or other toppings of any kind, and the bacon wasn't even that crispy. Apparently it was so unimpressive I determined it wasn't even worth a picture. But don't worry about Joel, he got to order cheesecake for dessert to make up for it. After we ate we lingered at the cafe for as long as we could, but by the time we left we still had over two hours to spend in town.

Google to the rescue! Joel found an archeological museum that was supposed to be nearby, so we began walking towards that. We got a bit lost and spent time darting from shade spot to shade spot, until Joel finally went into a cafe to ask for directions. Turns out we were across the street from the museum the whole time, the signage was just rather discreet. 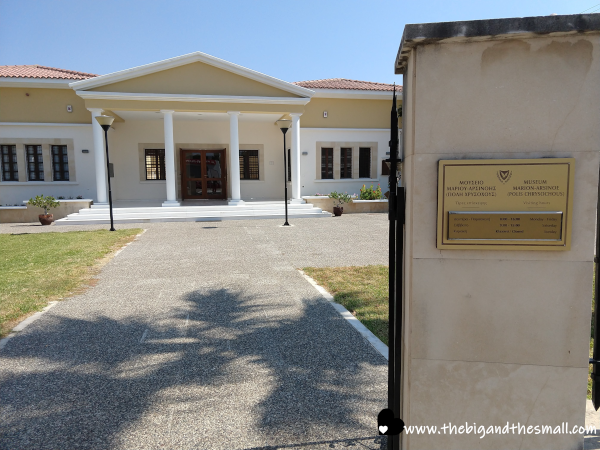 When we entered the building we breathed a sigh of relief - it was air conditioned! We promptly decided that the €2.50 entrance fee was well worth it, and that we would spend as much time as possible in the museum. To our disappointment the museum consisted of only two large rooms, but we walked slowly and read every plaque on the wall to make the time last.

The first room was filled with artifacts from local cemeteries. The city had been built and rebuilt many times over the centuries, and eventually these places were rediscovered through archeological digs. The pieces that could be rescued were brought here and restored as best as possible. This piece is a limestone painted funerary stele with a Greek inscription that reads: "Laiarchos erected this monument for his son Alexson. Thessaly is his motherland." It is from the Hellenistic period which is the 3rd century BC! 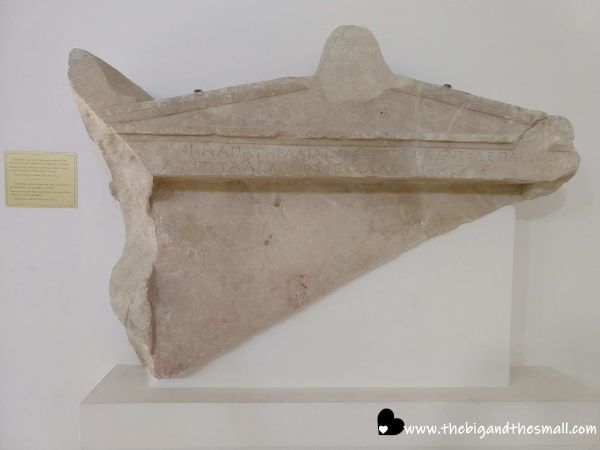 This lion's head was from a similar grave marker though I didn't capture the description of this one. 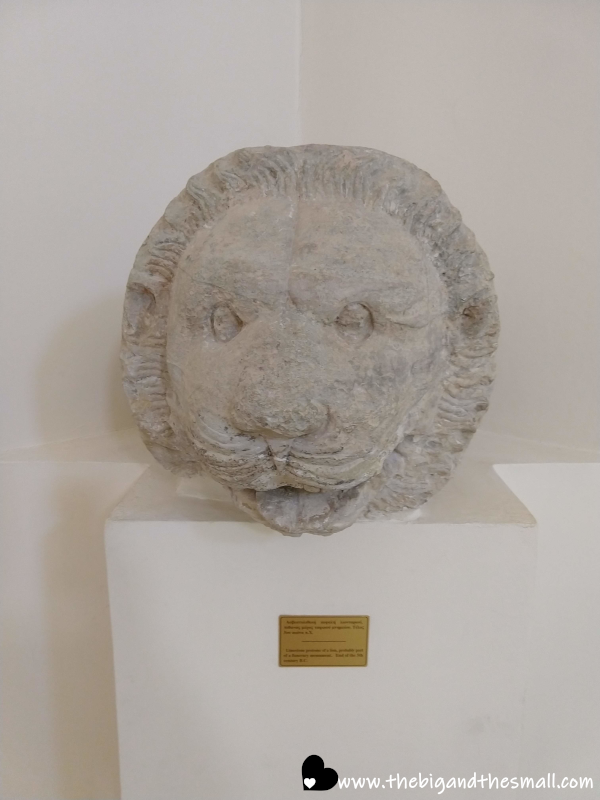 In the next room were a bunch of artifacts from over the centuries - jewelry, pottery, tools, etc. There were some early Christian artifacts, and some items were from as far back as the Neolithic era! It was fascinating to be surrounded by so much ancient history. 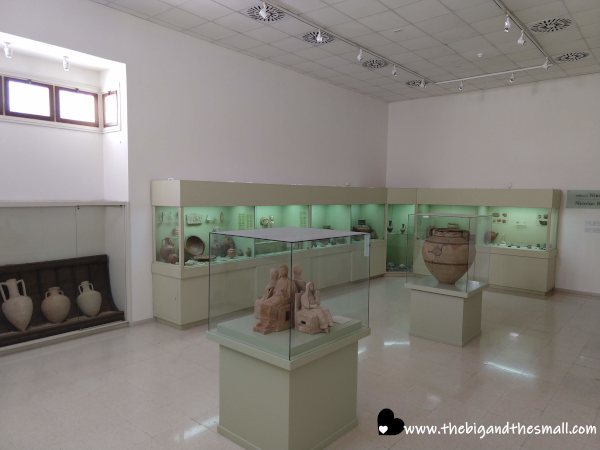 A brief history of the town of Polis was printed on the wall in this room. It is generally accepted that the ancient remains found in Polis represent the remains of the ancient town of Marion - which legend has it was founded by a mythical hero called Marieas. Over the centuries as Cyprus was conquered and taken over by various empires, the area came to both Greek Hellenistic and eventually Roman Empire influences. Remains of all these periods can still be found in the area today, and in fact there are current archeological digs uncovering new artifacts all the time! It is believed that the area has been continuously inhabited since the end of Neolithic B, so you can imagine the vast amount of history to be found here.

Perhaps my favorite piece in the museum was this partial clay statue from the end of the 6th century BC. They have put together as much of it as could be found. It was originally over three meters in height, and is believed to be one of the largest pieces of sculpture ever crafted from clay that was made in Cyprus. The statue was intended as a gift in a temple that was likely dedicated to Zeus and Aphrodite. While the body pieces were made on a potter's wheel, the face was made from a mold, allowing for more naturalistic features. This also helps account for the way the body is so much larger than the head. 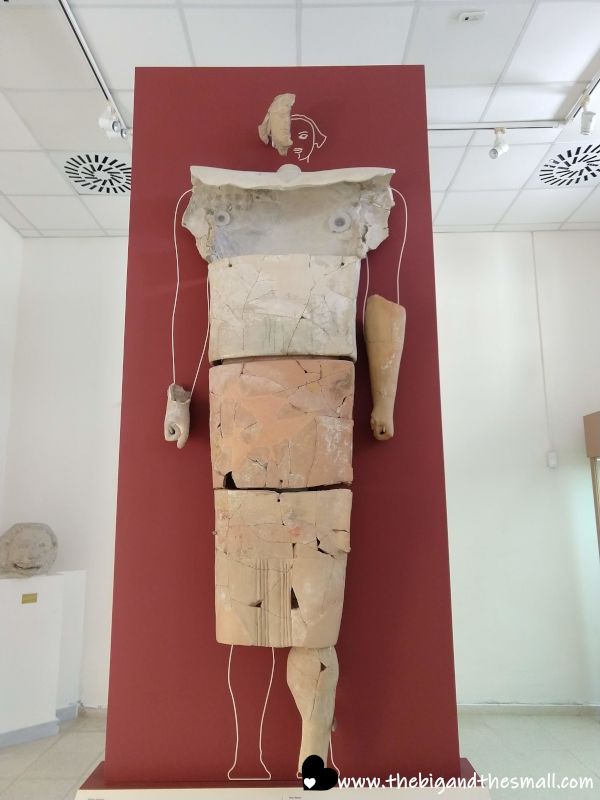 All told we spent about an hour in the museum, and then we couldn't justify lingering there any longer, though we were reluctant to leave the AC. We decided to spend the rest of the time shoe shopping for Joel - the sandals he came with were on their last legd and he needed something new. We found a store with great customer service and found a pair, then realized we had almost killed too much time and had to race back to the center of town to the bus! Thankfully we did not miss our bus back to Peyia, and finally at 4:30 we were headed back home.

It was a long, long day, filled with some twists and turns we didn't expect, but overall we enjoyed it. In the morning we had briefly considered venturing out again the next day to hit some more places that were on the guided tour, but after the day we had I knew I couldn't do it again two days in a row!

What are you like when you travel? Do you just go, go, go so you can see as much as possible? Or do you build in some time for rest and relaxation? One thing I love about traveling via housesitting is we can take our time exploring an area instead of feeling like we have to cram it all in in just a few days! I'd love to hear from you below!

I didn't answer your question...

On the gigantic statue for Zeus/Aphrodite the different tones of the body sections are interesting to me, why did they section it? Were there multiple artists at work on it? Were the parts from different regions? In the recreation of it, why did they choose to use filler on some parts and leave holes in others?

I forgive you for not answering my question...

LOL, I'll tell Joel you said that. I'm kinda glad it was closed to so we experienced local things instead! (We get enough American with our McDonald's series).

Lucky for you  I took a picture of the information about the statue, I'll see if I can post that here. In case I can't or it isn't readable, here is the specific info you asked about: The recreation has holes because it was destroyed in 312 BC and these are the parts they could find. A few have been reconstructed from fragments, but they left blank the parts they couldn't find even pieces of. It was originally created in segments because it was so large it couldn't be made and kiln fired as one piece. As for the different colors, that does not reflect what it would have looked like, instead that is a consequence of different restoration processes! It does not say whether there were multiple artists at work or if it was made in different regions. 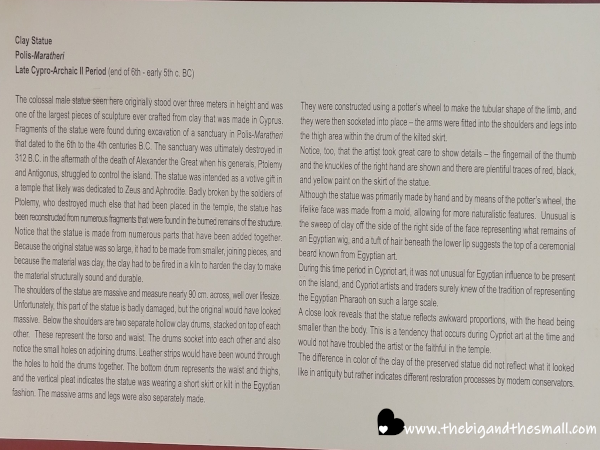