Not even two blocks from where we are staying is a restaurant called Savvas Grill. A huge sign outside advertises Greek music and dancing every Tuesday and Friday night. When we sit at home on the balcony those nights we can hear the music, and often we have walked by with the dog and seen the dancing. Needless to say this place was high on my list of places to go before we leave Cyprus, and Tuesday night we finally made it happen! 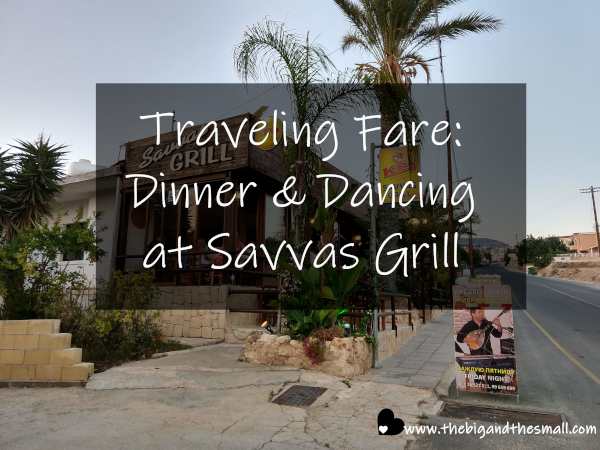 We made reservations online as our hosts had warned us that often they fill up on the dancing nights. It was really easy to do on their website! I also appreciated that they had the menu posted so I could plan out my meals to stay on track with weight loss. The prices aren't listed which made me a little nervous (if you have to ask you can't afford it, right?) But when we arrived they were actually quite reasonable.

We decided to get two starters to share as it gave us more variety than the entrees. First up was the Chef''s Aubergine which was baked eggplant with extra virgin olive oil, red wine vinegar, fresh garlic and pomegranate. I really enjoyed it! The flavors melded together well and the pomegranate gave a pop of freshness. For us it really went to the next level when we mixed with some feta cheese from our other plate. 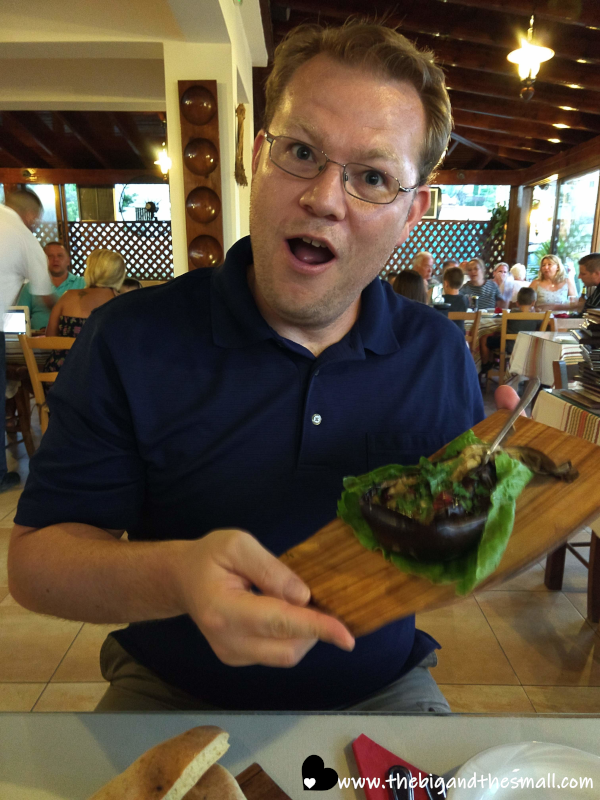 Our second order was the Grilled Platter which came with pork sausages, spicy beef sausages, lountza, halloumi cheese, feta dip and pita bread, according to the menu. Our plate also had grilled mushrooms and a small salad! Everything on this platter was incredible and it was plenty of food for two people to share as an entree. 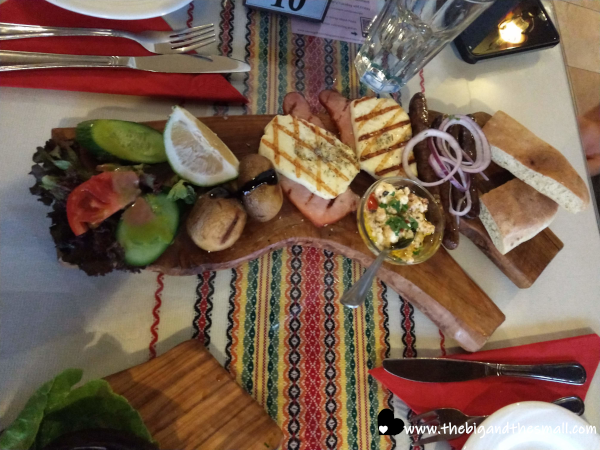 The whole time we ate there was live music. The musician's name was George and he played piano, mandolin and had an amazing singing voice. Joel is fairly particular about music and he was super impressed. When the music first started he thought it was a CD and was shocked to see that it was actually live! 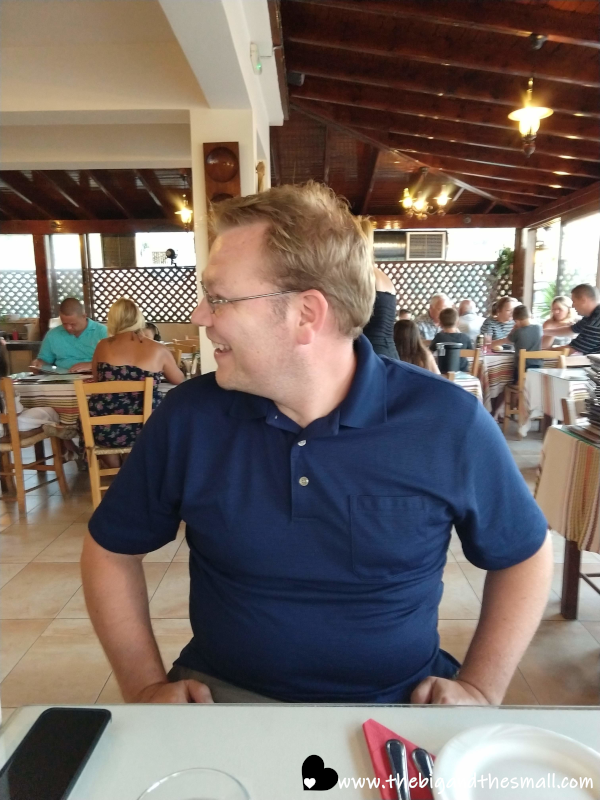 Precisely at 9:00 Michael and Peter came bursting in the room from outside and kicked it off with some super energetic dancing! Like, seriously, it was near impossible to get a picture of them they were moving so fast. 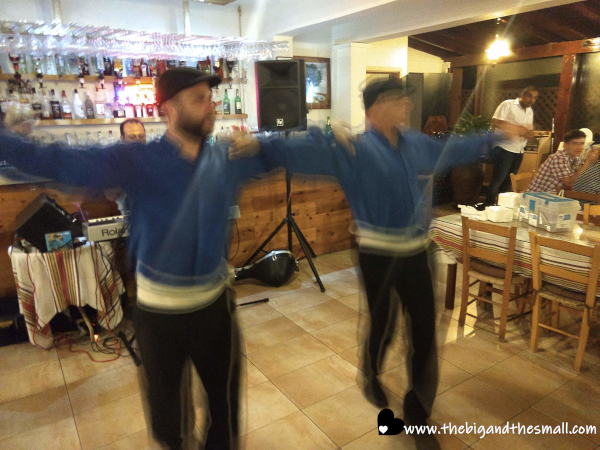 After a few opening dances they told us it was time for a traditional Greek dance that involves breaking plates! They warned everyone to keep their shoes on and for small children to stay away from the dance floor. Michael started dancing while Peter started throwing entire packages of white napkins up in the air like confetti. At first I thought they were simply going to use the napkins to symbolize broken dishes - surely they were joking about actually breaking dishes inside a restaurant? 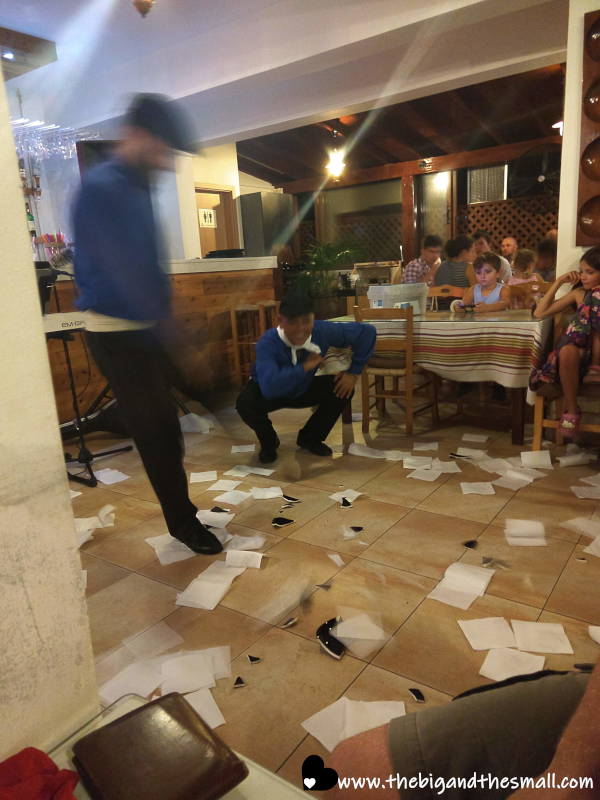 Nope! They were most definitely not kidding! Before we knew it Peter was crouched on the floor behind Michael throwing plates at his feet! It was so lively and entertaining and hilarious to watch. After a few minutes he pulled a young girl out of the crowd (about 10 I'm guessing) and let her break a plate! How fun! 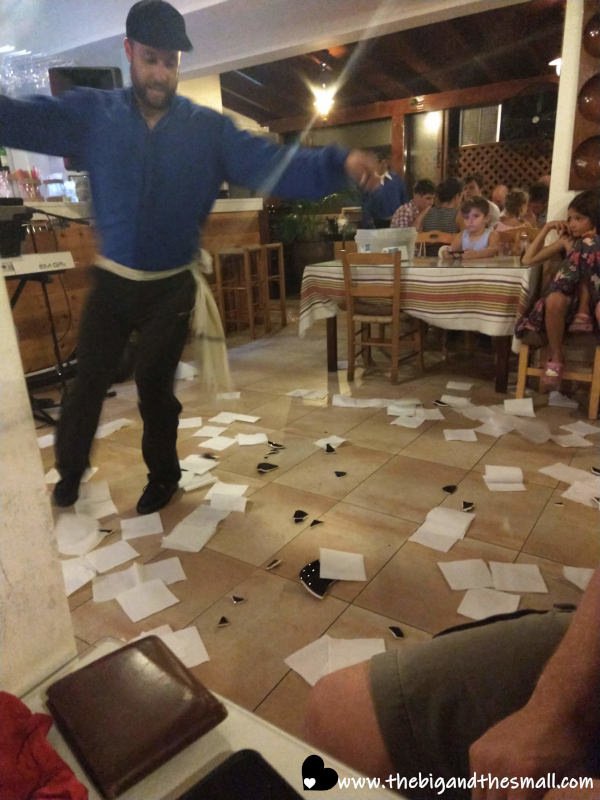 The next dance was one we had previously witnessed many nights when walking by with the dog, and I was so excited to finally see it up close. In this one Peter dances with glasses on his head, having people add more and more as he goes. They pull women out of the crowd to add the glasses, and I was the lucky first person chosen! I was A. super excited I got to participate, and B. super glad I went first while it was a lot easier to stack the glass. Joel took a video during this part so I don't have any pictures, but eventually I'll try to get the full video posted here.

They kept pulling more and more women out of the crowd to add glasses, and I started to wonder how far he was able to go! Sometimes Peter would kneel down so they could reach to add the glasses, and other times they would pull out a chair for the woman to stand on. I totally would have fallen off a chair so again, glad I go to go first. 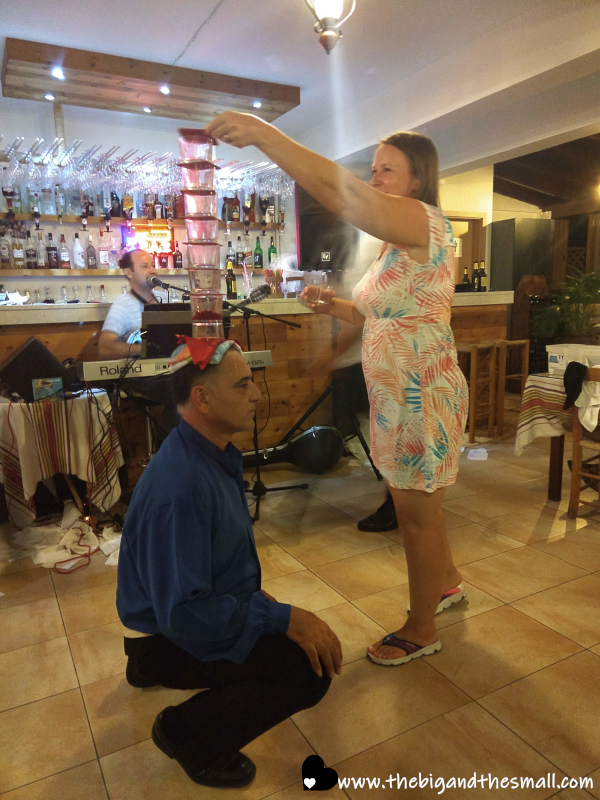 Eventually they put the final glass on top - can you guess how many he made it to? Don't guess, I'll tell ya! 10! He had 10 glasses on his head! Perfectly balanced and he could dance and everything! It was really a sight to see. Joel took like a billion photos on his phone secretly hoping that he would drop them and he could catch that on camera. Spoiler alert - he never dropped them! It was awesome. 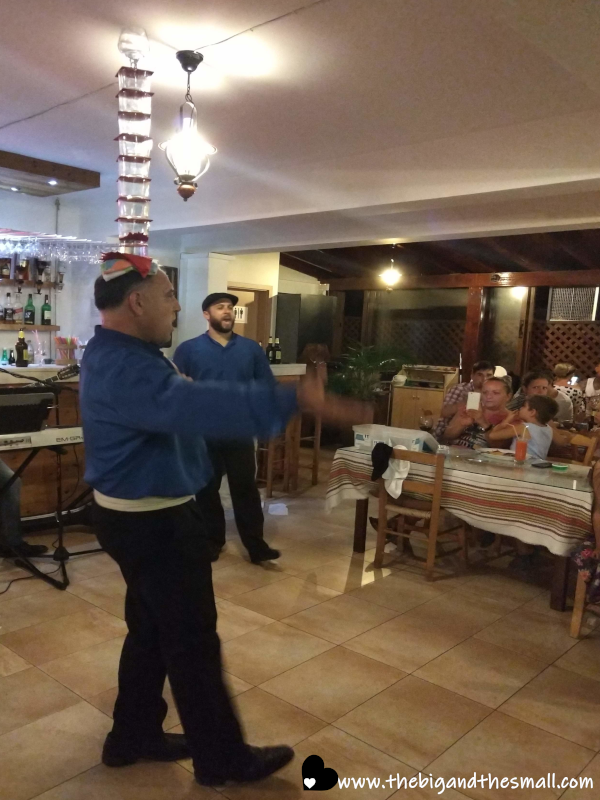 When Peter was done they pulled a random guy out of the crowd and asked if he wanted to try it! The guy's name was Nathan and he said he was game, he was really a good sport about the whole thing. However, they only put one actual glass on his head. Peter and Michael kept pretending to add more and making him walk carefully around the room so he wouldn't drop them. They led Nathan to believe he had five glasses on his head and the poor guy was so nervous but he did it! Finally they had him sit down, really did add all the glasses, then took them off to show him, look, you did it! Maybe you had to be there but it was kind of hilarious and awesome. 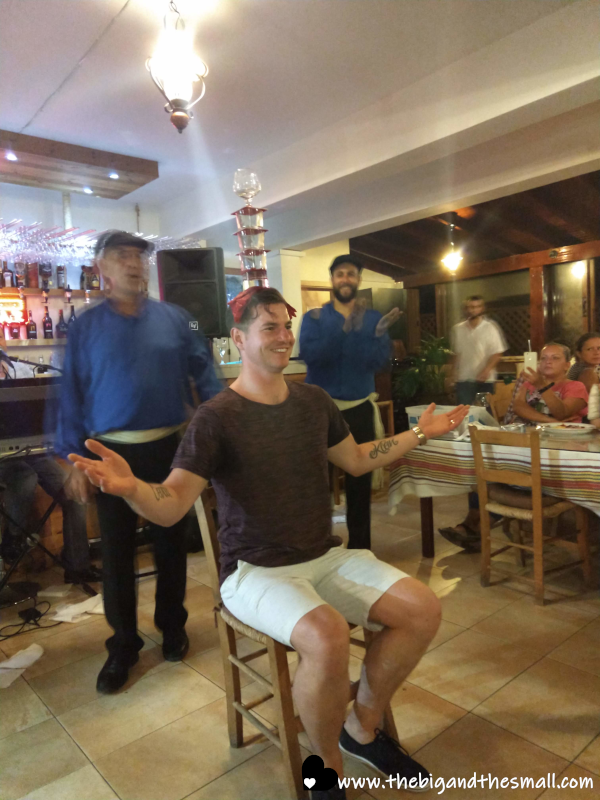 The final part of the evening I do not have pictures of because we chose to live in the moment and enjoy it instead. They called up everyone who wanted to participate and I made Joel dance as well. We started with a big circle on the dance floor inside the restaurant, but when the group grew to big we took outside to the street! (Literally, cars had to drive around us). We danced in a big circle doing foot movements and high kicks. They instructed us to move around, stand across from a partner and make a tunnel which everyone had to then move through. One part of the tunnel was two five year old girls holding hands so you can bet it was a challenge to get through that part. Then there was some twirling and spinning and do-si-dos (probably a different word for it in Greek) and then one more final big circle dance. I was hot and sweaty and loving every moment of it.

When it was over we moved back into the restaurant for a final performance from Peter and Michael, and they announced that Michael's wife was about to have a baby any day now! It was the most incredible night and I am so glad we went. I think it is by far my favorite experience in Cyprus so far!

Have you ever been to a restaurant with dinner and dancing that you go to participate in? Did you love it? Do you think you would want to go to something like this? Sound off below!