A Sunday in Coral Bay

This past Sunday we finally decided to venture down to Coral Bay and check out the local English speaking church. We had every intention of exploring the town some as well, but an error in navigation meant we missed out! 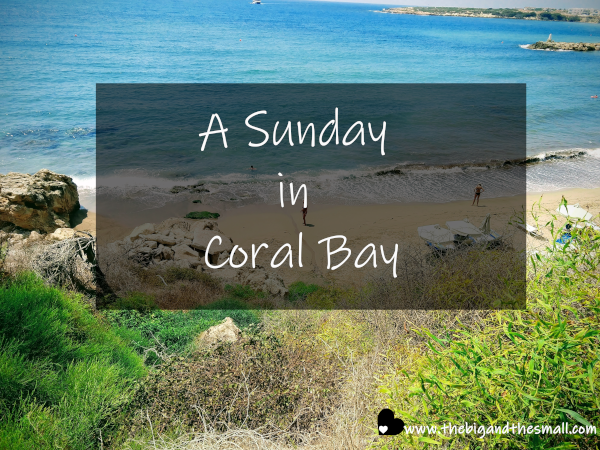 When we first arrived in Cyprus our hosts told us about a church that meets in a restaurant across the street from the main grocery store. They don't attend, but they have friends who do and have heard good things! We've been planning to go over since, but I kept chickening out because I didn't want to walk that far in the heat of the day. This week I finally decided I was in better shape so I was up to it, and I talked Joel into letting us pay to take the bus home instead of walking uphill. Win! So off to church we went. 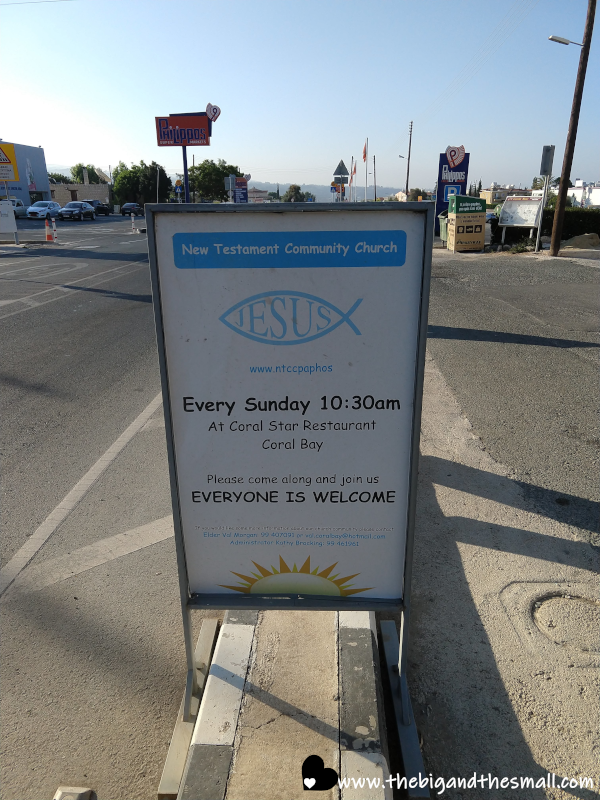 The walk down to church took almost an hour, we left at 9:30 and arrived around 10:25, just in time. We could have gotten there faster but we walked slower, hoping to avoid getting too sweaty before church. That plan only half worked, I was still pretty drenched, but I think I was just presentable enough still for church. (Pro tip: If you are super sweaty like me - we have started bringing a small washcloth with us, it works well so I can at least get the sweat off my face! Joel just hides it in one of his cargo pockets). When we saw a man in long pants and long sleeves walking towards the building we knew we were in the right place - no one would ever dress like that here unless it was for church! 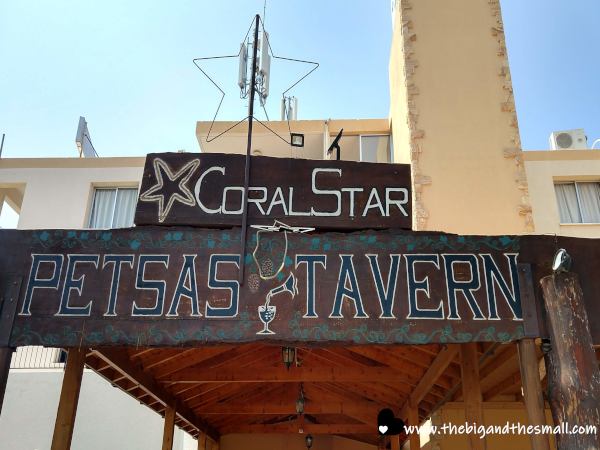 This church doesn't have a building of its own, so it meets inside a local restaurant. There were greeters at the door who then took us to the right place which we were grateful for, as it was all the way in the back and around a corner in a private room, we might not have found it otherwise. And thank the Lord in heaven above - there was air conditioning! I was ever so grateful. As is usual at small churches, everyone knows when you are new, so we were greeted and welcomed by many people. We were asked a lot - "Where is that accent from?" which is an odd experience for me as I don't think of us as having accents. But I suppose in a room surrounded by mostly British people we were the odd ones out! 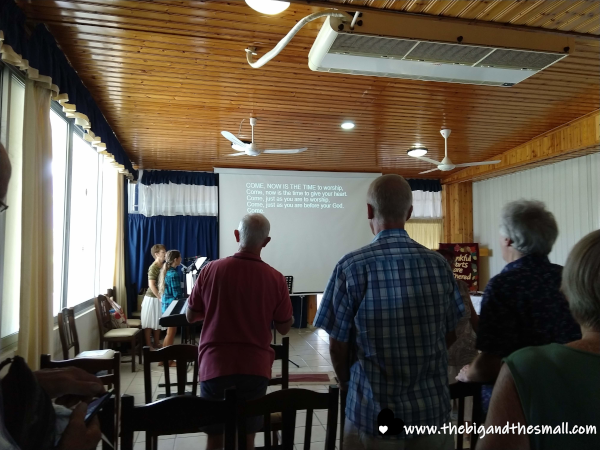 Shortly after we arrived the service began. There was no bulletin or order of service so we didn't know what was coming next, but I don't particularly mind that. We started with singing - a lot of singing. Of the first five songs, I was familiar with four of them. Then there was a short time of prayer and a scripture reading. Then more singing! After that we moved into another time of prayer, and then prepared for communion. I was grateful they made it clear that the table was open to all so we were able to participate. The servers we went to were from (I think) the Philippines, and when they spoke as they served the bread and juice they spoke in their native language. It was beautiful and gave me chills. We pulled our own bread from some small loaves, and the juice was served in those typical church "shot glasses" I like to call them (though these ones were real glass, not plastic!). 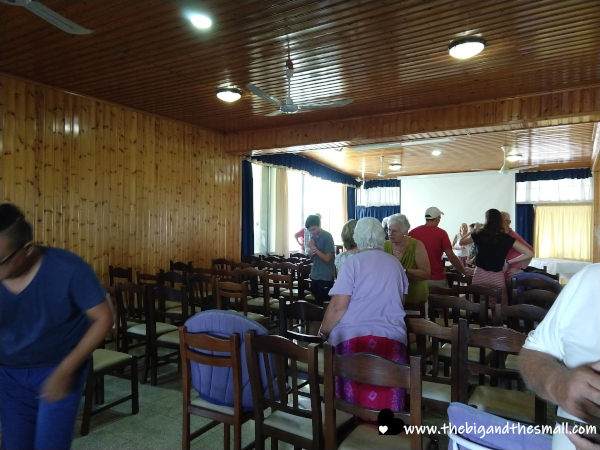 The service continued with more singing and at this point I was wondering if there was even going to be a sermon. Finally at almost the hour mark a woman stood up to preach. I was so excited to see a female preacher! She spoke about many things and wove stories into her sermon - some her own and two from a book. The story that stuck with me the most was one of a bad interaction she had with a neighbor; that neighbor no longer speaks to her, but every time she walks by the neighbors house she makes a point of praying for her. Perhaps someday their relationship will be repaired but for now she will care for her in this way. I enjoyed her speaking style though I am sad to say more of the message didn't stick with me. (Perhaps because at this point I was really tired).

After church I was so thirsty we hightailed it across the street to a coffee shop that looked interesting - the Banana Tree Cafe! 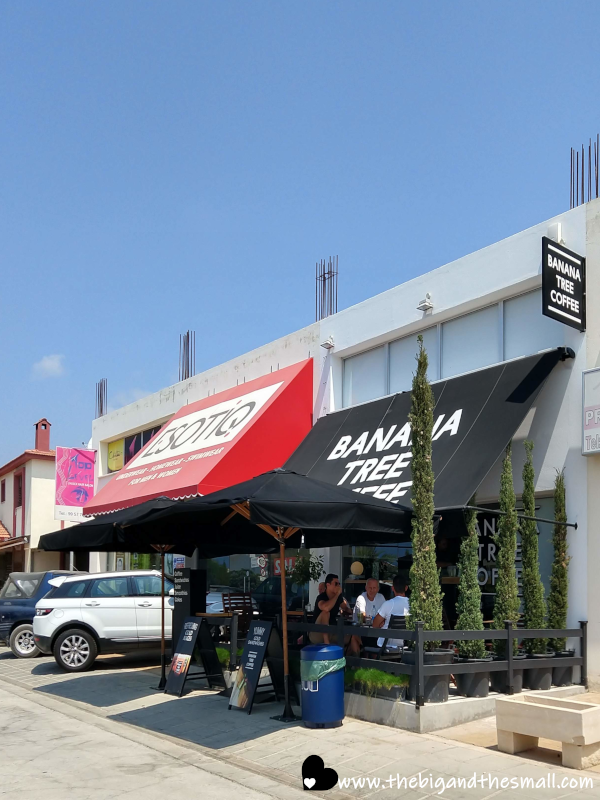 Once inside I had a bit of sticker shock at the prices, though it is pretty comparable to a Starbucks or other specialty coffee shop in the States. I'm not big on coffee (I drink it maybe once a month) but right then I had a major craving for an iced coffee. Joel indulged me (and let me bust the budget a bit!) and I got an blended iced cappucino with vanilla and caramel flavoring. 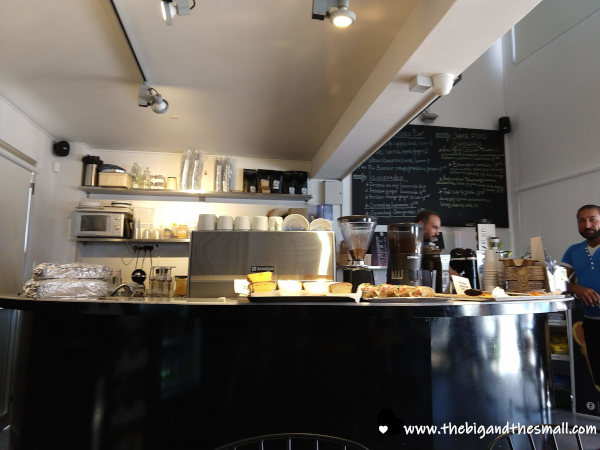 I don't know if it's because I was tired or hot or thirsty or because it was just that good, but this was one of the best iced coffees I've ever had. It was all I could do to drink it slowly enough that I didn't get brain freeze. I was nice enough to let Joel have a little bit of it, but I could have easily drank the whole thing myself! 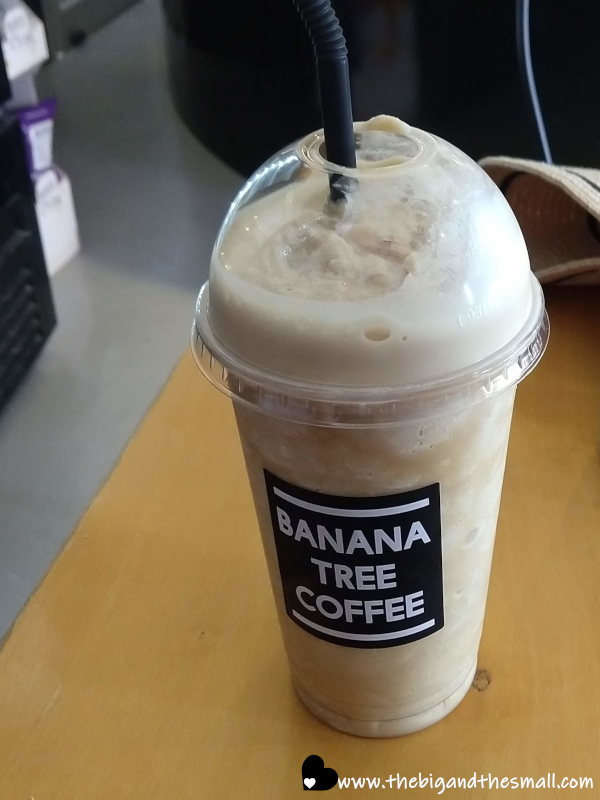 Having quenched my thirst and boosted my energy we turned our attention to the rest of our day in Coral Bay. First we stopped at Philippo's (the grocery store) to get more (what else?) cheese! [Fun side note: on the house sitting website we use, our username is WeLoveCheeseNTravel] After that, however, our day started to unravel a bit. We went upstairs to check out the cafe only to find out it closes early on Sundays. So we decided to walk the half mile or so to the part of Coral Bay that is down by the beach. We walked, and walked, and walked, in the full sun I might add, still in our nice church clothes.

We did come across some interesting grafitti. Before the housing crisis hit Cyprus, construction was booming and many people were building new homes. When it hit, construction ceased almost immediately. Everywhere on the island you run across homes that are half way finished or less. This particular one had a heartbreaking line spray painted on it - "One day this nightmare will become a dream". I said a small prayer for whomever wrote this before we moved on. 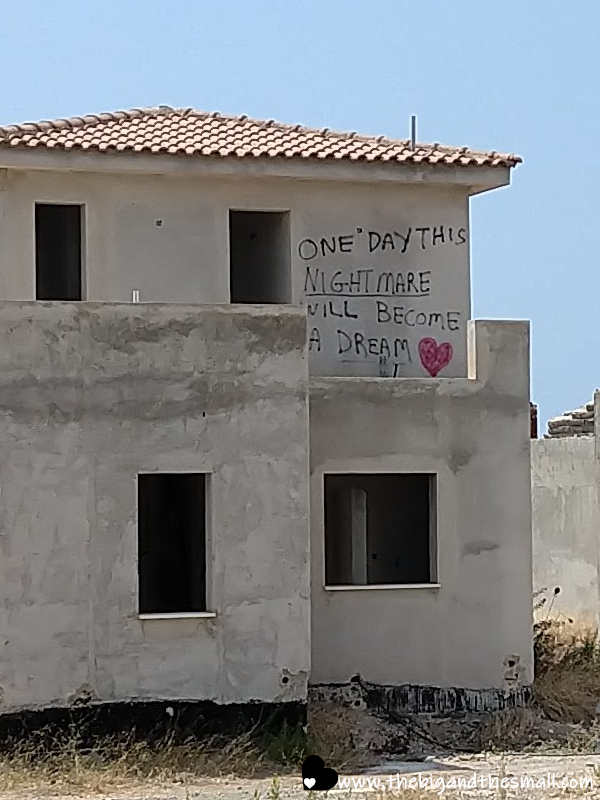 We kept walking for a while longer until Joel checked Google maps and realized that we had gone the wrong way! We immediately took a turn towards the coast to try to find our way towards the road we had meant to be walking on. By the time we found it we were well past the shops and restaurants we had intended to walk through. At that point the choice was walk 10 minutes back the way we had come to get to that area, or walk 7 minutes the other way towards where we would get on the bus to go home. I was hot (and I had cheese to protect in my purse!) so we opted to head towards the bus for home.

Of course that took much longer than expected as well. We did take a small detour to follow a sign towards a museum, the sign said it was only 200 M away! Well the sign lied, and by the time we finally got there it was just to learn that they are closed on Sundays. Of course. The one bright spot here was that on the way back out from this detour I spotted a break in the trees and when I stepped through I got the most beautiful view of the beach from up on the hill. (See the title picture!)

From there we decided to cut through a fancy hotel, and made it through their lobby onto their beach area with no trouble. Let me tell you if were staying somewhere like that I would be on the beach every day! I didn't take any pictures because I didn't want to look like an interloper. It was lovely to walk by the ocean on a nice stone path, and the water was dotted with boats and adventure outlets offering diving lessons, fishing, and parasailing. 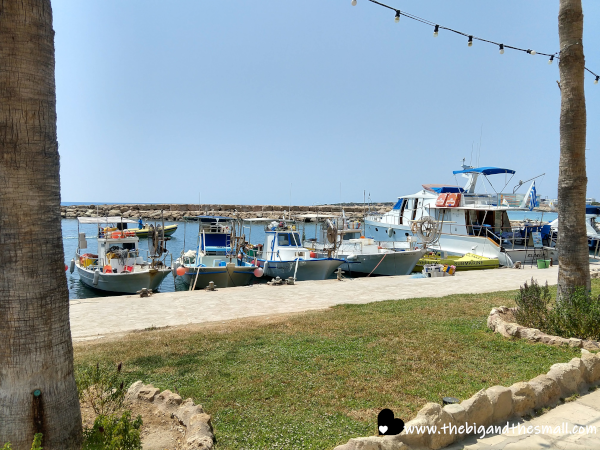 We should have been able to walk straight across the beach to the bus stop and it should have taken about five minutes. "Should have" being the operative words. Instead we ran into dead ends and had to take some twists and turns and every time we thought we were almost there we would come across some impassable terrain that we had to go around. In the end what should have taken five minutes took more like twenty and by the time we got to the bus stop it was going to be another 40 minutes before our bus came by again. 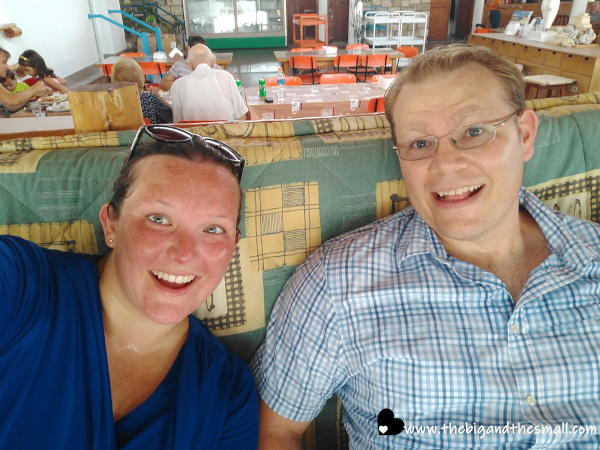 Luckily there is an open air restaurant nearby where we could sit and relax. We were hot and tired and hungry; thank goodness for the cheese in my purse! Joel took a chunk and ate it straight out of the wrapping. 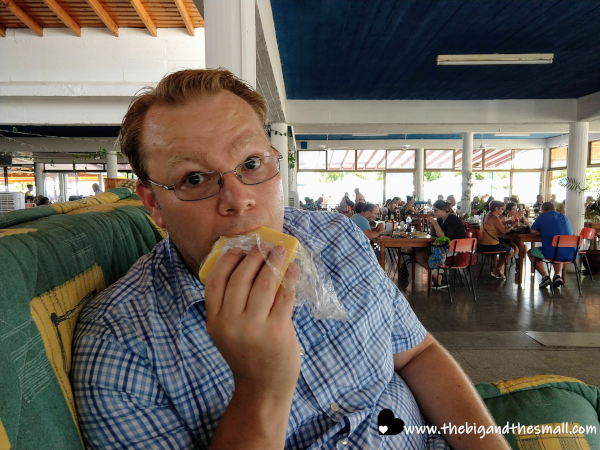 Finally we were able to get on our bus and were headed home. The bus had strong AC and a very friendly British couple who wanted to hear all about how house sitting works. Unlike when we came home from Paphos the bus didn't make a special stop for us, so we ended up further up the hill in Peyia. It worked out well because we grabbed some groceries on the way home, and it's always easier to walk a half mile down hill than two miles uphill!

The day didn't quite go as planned but we had some fun along the way anyway. We plan to go to church again this week and make sure we go the right way to really check out Coral Bay!

Have you ever gotten lost while on vacation? Have you ever missed out on something you intended to do? Please tell me we aren't the only ones!