Almost every morning (and a lot of evenings) when we walk the dog we walk by The Brewery Bar - a local joint with a fabulous patio and a nightly line up of entertainment. We haven't spent a whole lot of time in Cyprus going out but this last Friday we decided to splurge and check out what this place looks like as a customer (rather than just a sweaty mess running by with the dog). 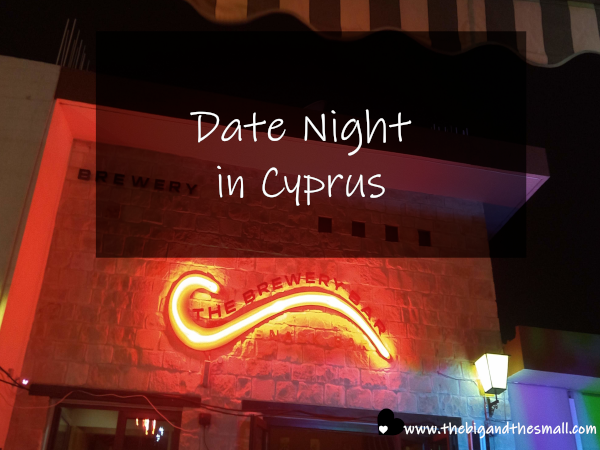 For the majority of my time here I've been living in either workout clothes or my swimsuit. I hate making outfit changes, and since our days revolve around walking the dog and going to the pool, I just don't see the point in making an effort to put anything else on. I've been getting kind of sick of that though, so I was excited to have an opportunity to get a little dressed up. I was even more excited when the dress I chose fit way better than it did the last time I wore it! It's so fun to see how my clothes fit differently as I finally make progress on losing weight. Joel did't get quite as dressed up as I did, but he still cleaned up pretty nice. 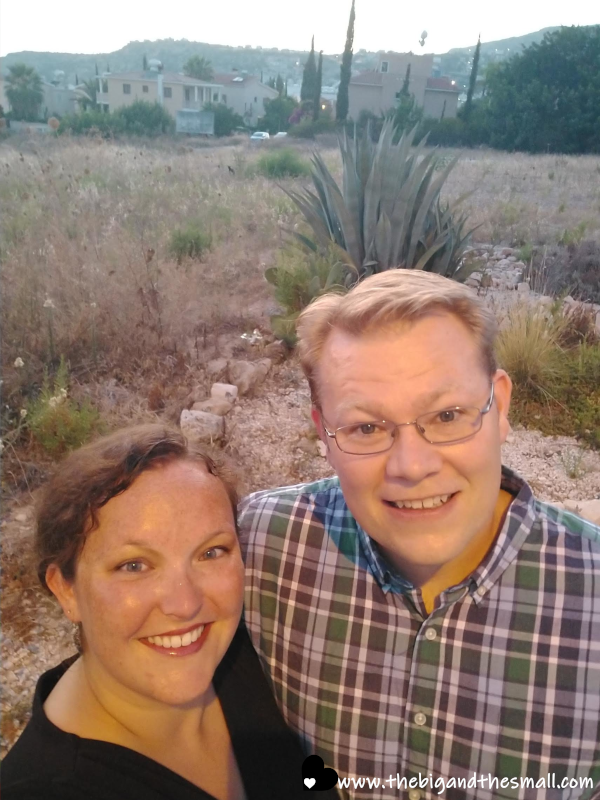 It only takes us about five minutes to walk to the place, though it does involve a shortcut through some rough terrain. I felt a little silly walking on what amounts to hiking trails in my fancy dress and nice shoes, but oh well. The band we were going to see was called "Mid-life Crisis" and they advertise themselves as playing everything rock from the 70's on. We both love that kind of music (although Joel is a bigger fan of music in general than I am) so we were pretty excited! 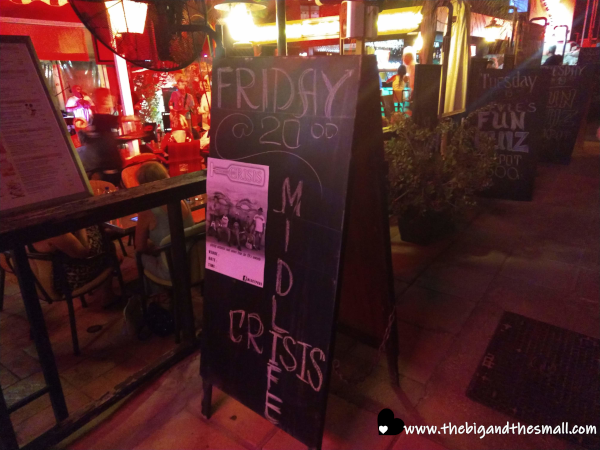 Though we weren't really hungry, and it was technically after our intermittent fasting time had begun, we felt like we couldn't just come watch the show without ordering anything. We are on a budget but we don't want to be rude, either. I've been trying to eat low carb so I ordered a drink (whiskey and Diet Coke) and we ordered a Cypriot favorite from the menu - fried halloumi! I love any chance I get to eat this yummy fried cheese (like here and here). When my drink arrived I was a little disappointed to see that 'Diet Coke' had become 'Diet Pepsi' - at least in America they have the decency to ask if that's okay before they make the switch on you! I'm mostly kidding, and I did enjoy the fact that the Diet Pepsi came in a glass bottle.  Plus I figured the whiskey would hide the taste of the Pepsi and the Pepsi would mask the taste of the whiskey so it might be fine. Overall the drink just tasted like college memories and I texted my bff to tell her as much. 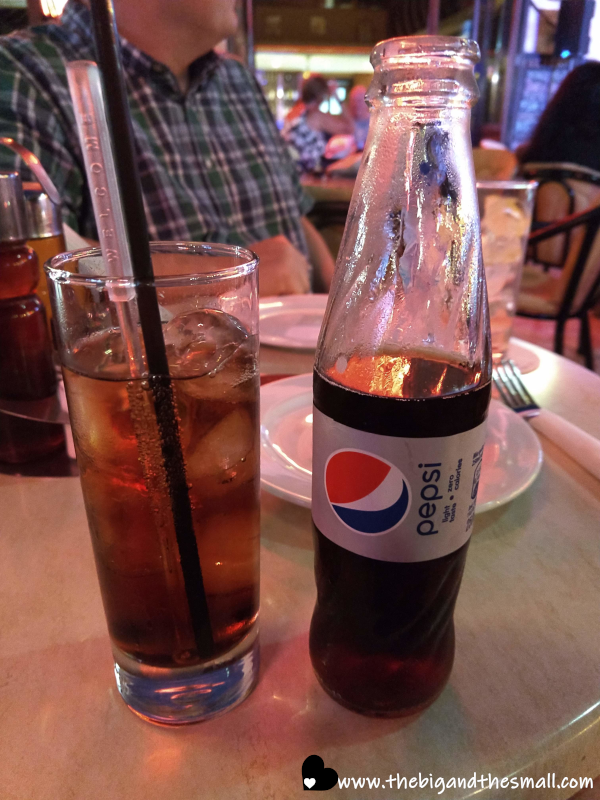 When the halloumi arrived we were in for a big surprise! Usually 'fried halloumi' means that the cheese itself is grilled or fried - this cheese doesn't need any breading or anything extra. For the first time in our experience the halloumi came fried more like I would expect to see in the states - it was breaded! This means Joel got to eat most of the halloumi, though he did diligently remove the breading from some portions and I ate those. I actually really enjoyed it with the balsamic drizzle that was on top, that was also something we haven't seen before. 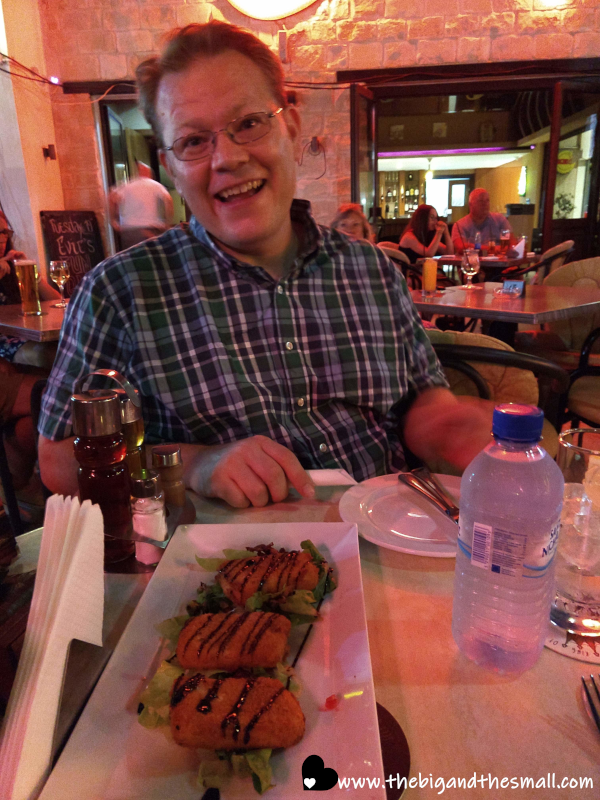 While my drink and our food was arriving, the band got started. I was really impressed with the set up. The sound was good and there were some fun lights that kept the colors changing. We were out on the patio with a cool breeze (helped along by a couple fans) and the chairs were quite comfortable. The band was pretty darn great for a cover band, and I loved that the lead singer wore a shirt that simply said "Everything" in black letters on a white tee, we assume in reference to the fact that the band says they play everything. 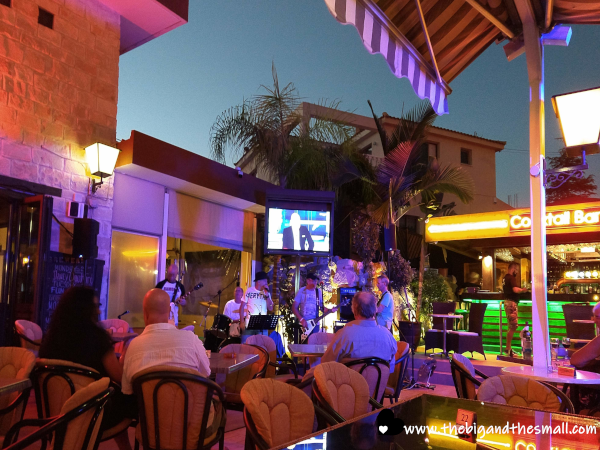 Along with the music there was even some dancing! One older couple got up and was really tearing up the dance floor (I shared some video of them on IG stories). It was so fun to watch! We had arrived early enough that at first the place wasn't very full, but as the night went on it filled up quickly. Once we were done with our food and drink we started to feel a little guilty about taking up space. When we noticed people arriving, looking around for a seat, and then leaving when they didn't spot one, we decided it was time for us to go home. We had been there for a little over an hour and thoroughly enjoyed ourselves so we felt it was worth it! 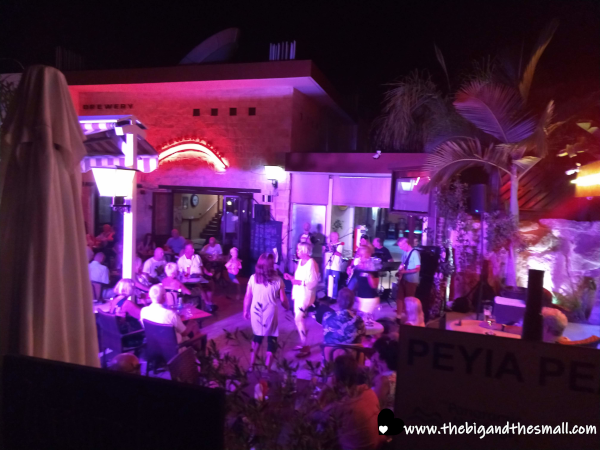 As seems to be the norm in Cyprus, it took us quite a while to flag down our server and actually get the check. We've started to get used to this so we don't mind so much, and we especially didn't mind this night since it meant we got to hear more music. As is typical in most European countries, tax and tip are included in the price of the meal (it's nice to know that what is on the menu is exactly what you'll pay), but Joel usually just can't resist leaving a tip anyway. 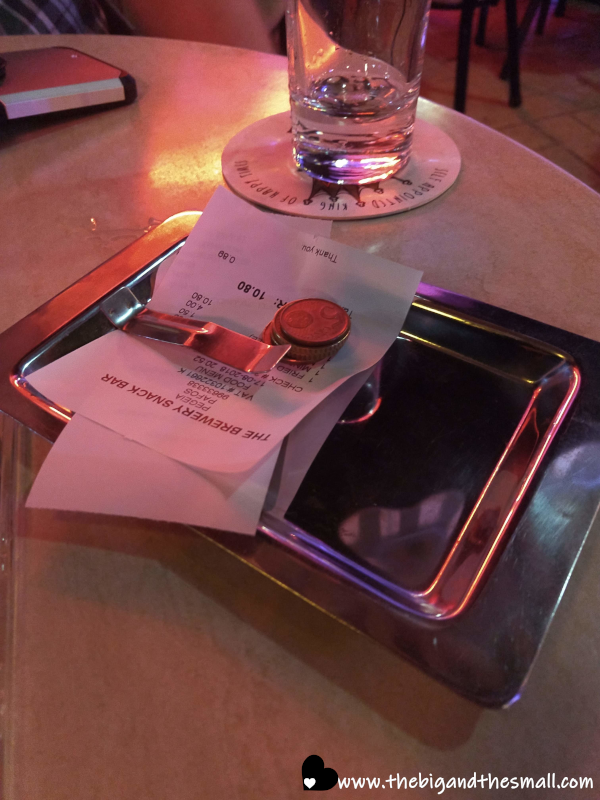 I make fun of him for it, but I suppose no one is going to be mad about getting an unexpected tip. The walk home in the evening air was refreshing and kind of romantic under the moonlight. Overall it was a very enjoyable (and affordable!) date night! The music scene here in our area seems to be hopping - there are a lot of bar/restaurants like this one that have cover bands or artists almost every night of the week (usually with a trivia night thrown in there as well). If you are ever in the area be sure to check out at least one!

So tell me, what's your favorite thing to do for date night? We are usually movie people but since there isn't a theater close by, it was nice to mix it up with some live music. I'd love to hear all about it!