One of the biggest things we've had to get used to while living in a foreign country is grocery shopping in a different context. On the one hand, much about the experience is really familiar - a grocery store is a grocery store wherever you are, right? On the other hand, so many small things are different and it takes some time to figure it all out! 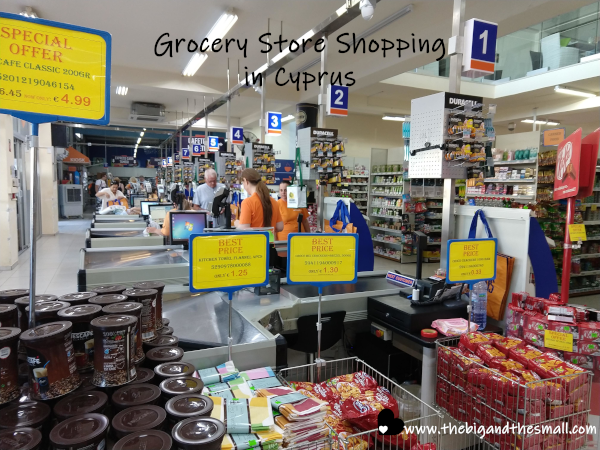 One big difference between most of Europe and most of America (I am generalizing here) is the frequency of shopping. Americans tend to shop once a week (or less often!) and "stock up" when they go. I think the reasons for this are many - it's usually not easy to walk to a grocery store so a drive adds extra time to the trip, we live over scheduled lives that aren't conducive to running errands every day, and we tend to buy a lot of pre-packaged processed foods that last forever in the fridge or pantry. Europeans tend to shop daily or at least a few times a week. Even if the big grocery store isn't super close, it's likely a local market is closer. The smaller store will probably still have good prices, and the location will make it easier to go more often. And most of all, food is fresher and less processed, which means it doesn't last as long, so you do not want to buy in bulk. Case in point for us here: bread. 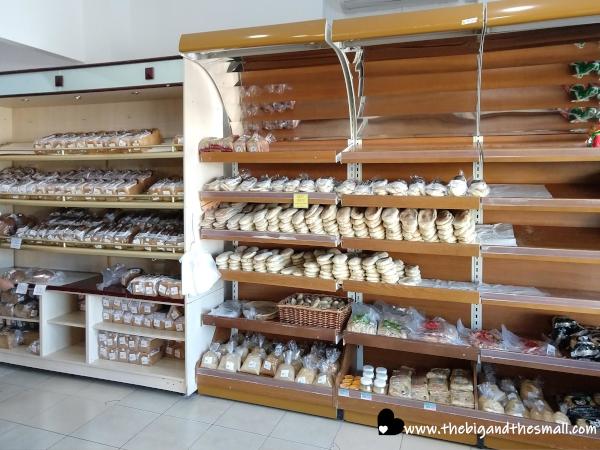 All the bread we have come across in Cyrpus is freshly baked in bakeries, and often when you choose a loaf it isn't even sliced yet! They will do it for you, of course, though the first time we bought one we didn't get that done for some unknown reason, and it made for some really wonky sandwiches our first week. Here on the island bread is quite cheap - you can get a hearty loaf filled with nuts and seeds for less than €2. We were shocked the first time we saw these prices! You can get fresh baked pita bread for €.30 and you get at least two sandwiches out of one. Compare this to the US where, unless you go to a specialty bakery (where the prices will be high!) you are buying shelf stable bread full of preservatives. We've learned we have to get through a loaf fairly quickly here (3-4 days) or it will go bad, whereas back home we could have bread stick around for almost two weeks without any ill effects. 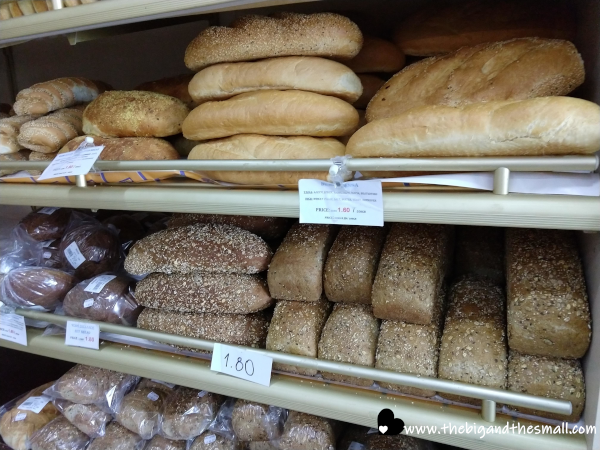 That was a lot about bread; can you tell I like my carbs? While some things are much cheaper here than at home, others are much more expensive. Dairy products are one of those items, which is sad for me, because coming in a close second to my love for all things carbs is my love for all things dairy - butter, cheese, sour cream, ice cream, you name it, I love it. (Except yogurt, blech). We've had to cut back a bit on our dairy consumption here in order to stick to our budget. It's August and hot here, which would normally be a time that we would treat ourselves to some ice cream. But the prices gave us sticker shock so we haven't bought any to have at home, not to mention the time it takes to get back from the store in the heat would be pretty detrimental to it. One thing I do love though - sometimes it's called "Ice Dream" instead of ice cream! 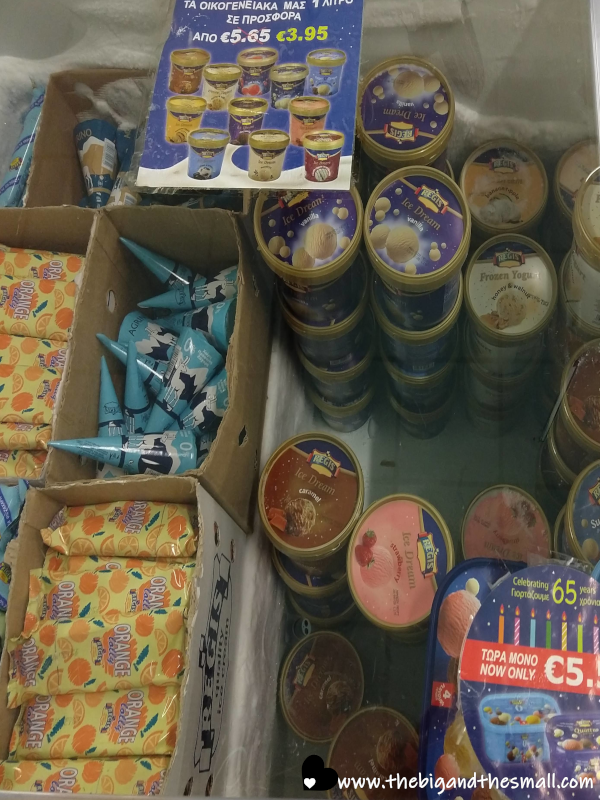 I have not, however, been able to give up cheese. Cheese is life. The packaged cheese in the dairy aisle had me almost crying at the prices and thinking I was going to have give up cheese. However, at the back of the store we found the deli section and realized the cheese there was significantly cheaper, especially if you went with what was on sale! This is another difference from the States, at least in my experience. At home pre-packaged cheese was always the far cheaper option, while the stuff you got at the counter was more expensive. Here it's the opposite. And since we aren't too picky about cheese (all cheese is good cheese) we just get whatever is on sale and call it a day! (Though today we splurged a bit on block of Irish Mature Extra Cheddar and it is so.dang.good we already have plans to make the trek back down the hill to buy more). 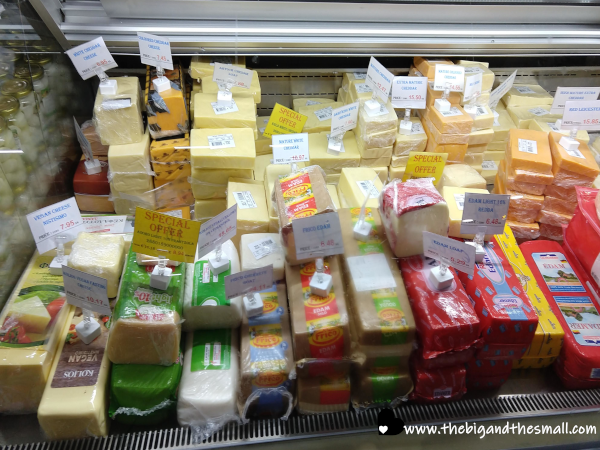 The meat counter was also where it's at for cheap meat here! Again, this is the opposite of my experience in the States. We get whatever is cheapest/on sale (without going too low, I can't do bologna) so we've been eating ham and salami a lot. Communicating at the counter is a bit of a challenge as not all the workers speak English, but usually some pointing and pantomiming will help get the job done. 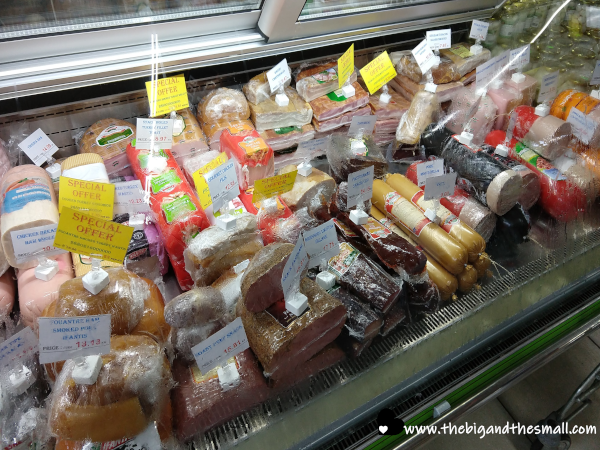 Produce is pretty well priced around here, depending on what you get and where you get it. We've actually discovered that the fruit market about a half a mile from us has better deals than the two locations of the big chain grocery store. The key there is looking at the produce they have outside - that's where they move the "less desirable" items that have some discoloration or other imperfections, yet are still perfectly edible and delicious. You can score them at a deep discount - we've gotten 4 perfectly ripe and delicious nectarines for as little as €.50 before! Score! A giant head of lettuce is only €.40! Tomatoes are super cheap as well. However, avocado and mushrooms are super expensive, and spinach is nowhere to be found. We've gotten into the habit of buying fresh produce about every third day, and I am much better at making sure we actually eat it here. (At home I had a bad habit of buying stuff and then letting it go bad before I got around to eating it). 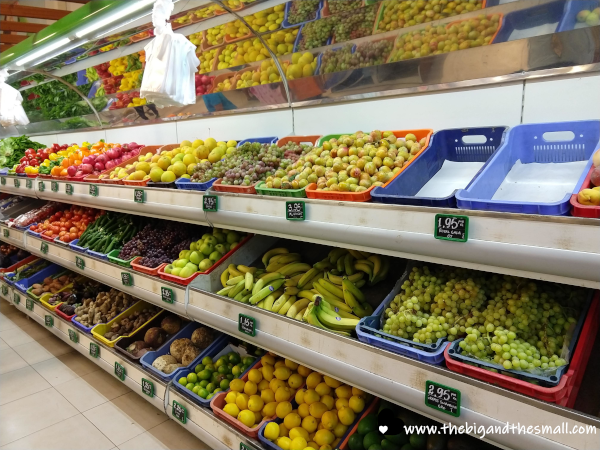 As we wandered around the rest of the grocery store we found items that are both familiar and unfamiliar. In the familiar category, we have a whole bunch of Heinz products that would be right at home in any American grocery store. 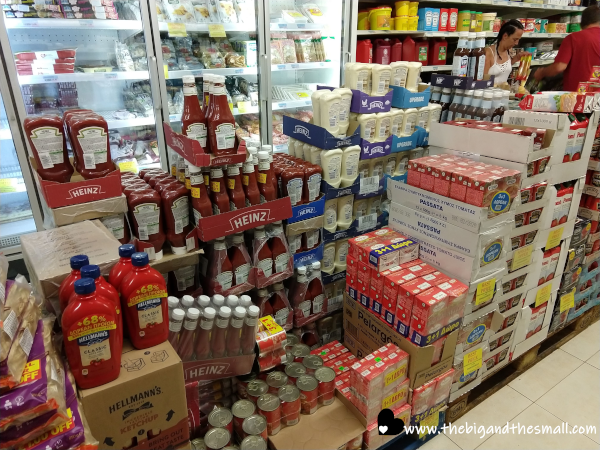 In the candy aisle we have a mix of familiar and unfamiliar. You can spot well known American favorites such as Kit-Kat, Twix, Crunch and M&Ms, but then you also have things like Yorkie, Lion, Galaxy, and Kinder Bueno. This is getting me thinking... maybe we should be doing a candy taste test like we did with the chips a few weeks ago... hmmm what do you all think? 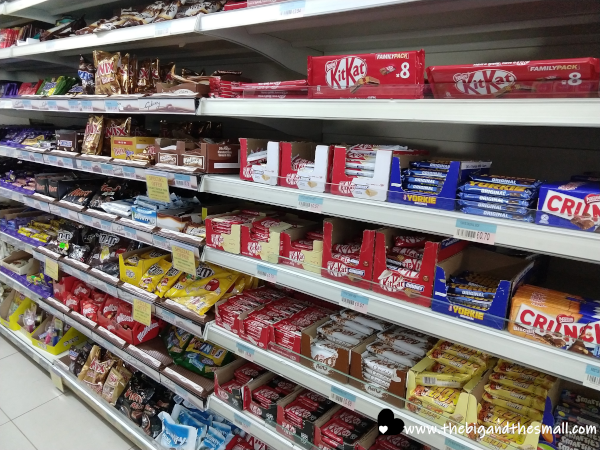 One fun discovery felt like a mash up of the familiar and unfamiliar - Cheetos (a familiar brand) makes cereal (a product I've never seen from them before!). 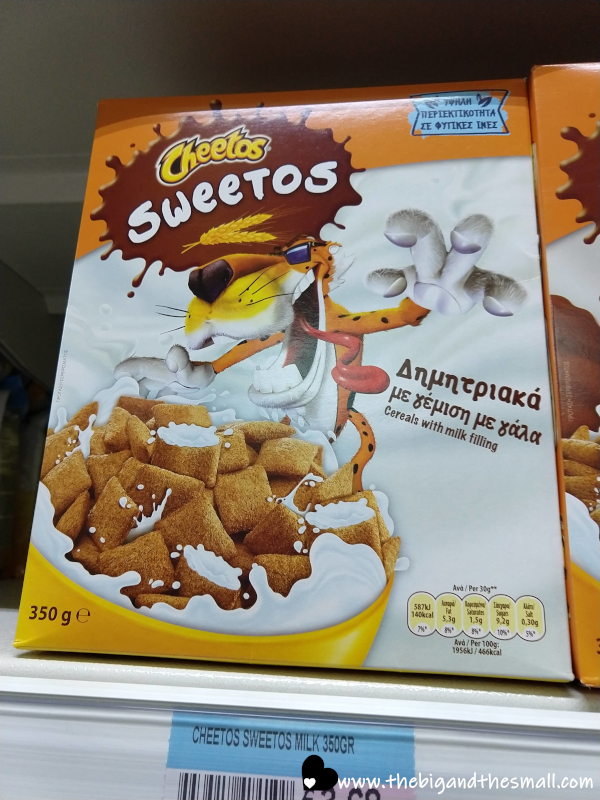 I couldn't resist stopping in the wine aisle and was pleased to discover a whole range of options, from quite inexpensive (€3 a bottle) to, well, let's just say prices I would never consider spending on a bottle of wine. If you want some wine to go with your cheese, you'll be able to find your style and your price range, I'm sure! 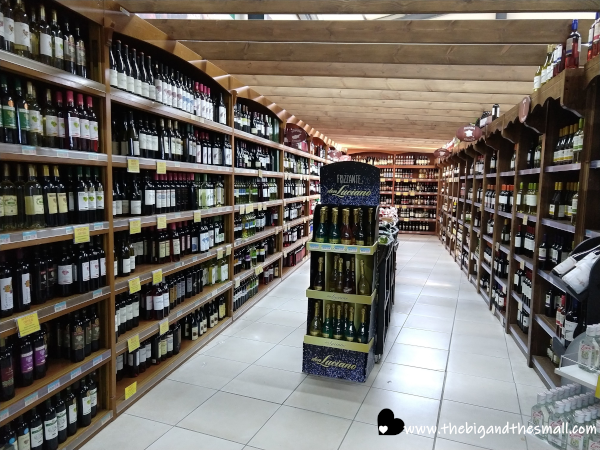 I found what I wanted! (Pardon this pic, this was actually taken at the store up the hill, so I just walked a mile straight uphill at the end of the day. This is pretty much what I look like in Cyprus all the time though. It's a glamorous life I lead). 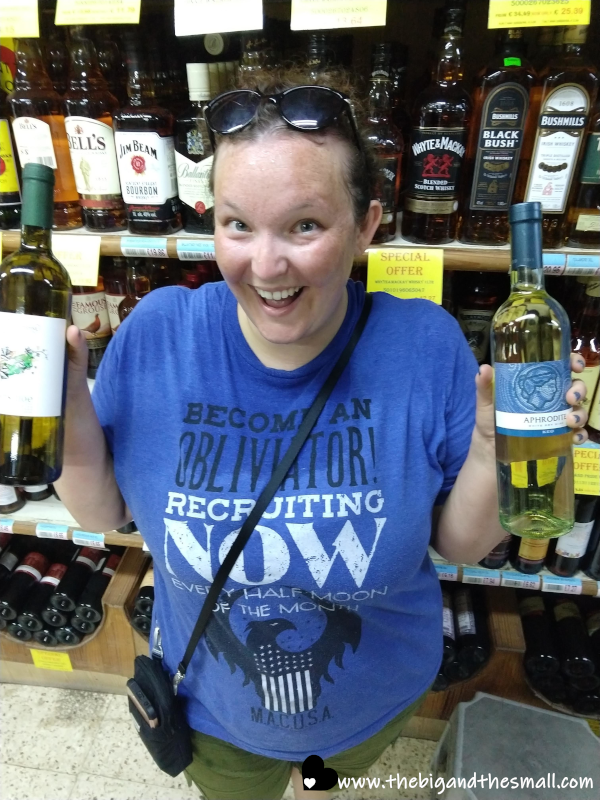 When we go down to the big store (the only place we can get the cheap meat and cheese at the deli counter) it's about a two mile trek downhill.  Going down isn't so bad. Walking back, uphill the entire way with all of the groceries we purchased? No thank you. Luckily this particular chain offers free delivery if you spend over €25! Praise the Lord! You have to wait a good while for the driver (like 15-20 minutes), the guy who drove us both times now is a bit of a grumper (he must not like his job very much), and he drives really fast (so buckle up!), but no matter what, it's worth it to me to not walk uphill for two miles with extra pounds of groceries. (Though let's be real if we did have to walk, Joel would be carrying all the heavy stuff). 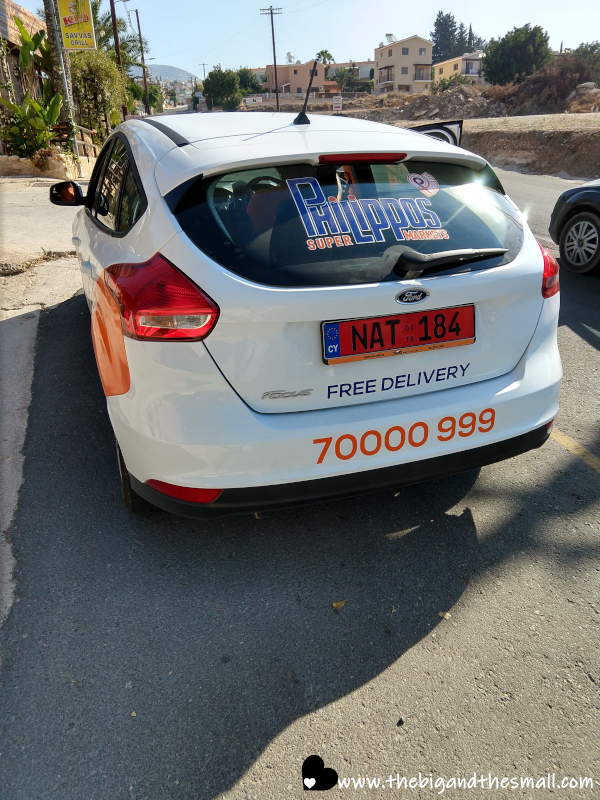 All of the food we have bought here has been delicious, and we've tried some out of the ordinary things for us which is always fun. I'll be excited to see what grocery shopping is like in our next country (Germany is coming up!) and to see if there are any more big differences in store for us!

So what about you? Have you ever gone grocery shopping in a foreign country? Heck, sometimes just shopping in a different state can seem like a foreign land! (When I moved from Iowa to Georgia I had some things to figure out). Tell me all about your experiences!

P.S. I have to leave you with Joel's favorite thing about the grocery store here - the carts have wheels that spin in all directions! I don't quite share his enthusiasm for this but he LOVES it.

The Wheels on the Cart go Round and Round

I love grocery shopping in new areas/countries. So much to learn and so much to try! I'm very jealous of your splurge on Irish Mature Extra Cheddar, I'm making my best Homer Simpson drool face impression... but you know all about my love of carbs and cheese.

I vote you should do a candy taste test! Are there any specifically Cypriot brands/types of candy? I'd save the Kinder Chocolates for it's own segment in Germany, the home of Kinder Chocolates, and you could have a real kinder überraschungseier, "unbox" the toy moment.

First, I love the subject line for your comment - literally made me laugh out loud!

Second, yes, you are totally jealous of this cheese you would LOVE it, especially cuz we are carbs and cheese besties! (Side note I've been eating low carb this week and it's tough, but I'm comforted by the fact that I can eat basically as much cheese as I want. And bacon. Mmmm bacon.)

Third, yay for candy test! I'm still pushing for my weight loss goal here so I think we will wait for Germany to do it. The most Cypriot type of candy I've seen we got at the end of our meze and I didn't care for it. I love your idea of the unboxing in Germany, that will be fun!