One of the first places our hosts told us we should eat was Geitonia Kebab House. They even told us what we should order - the meze! We didn't really know what it was but it came highly recommended so we were excited! 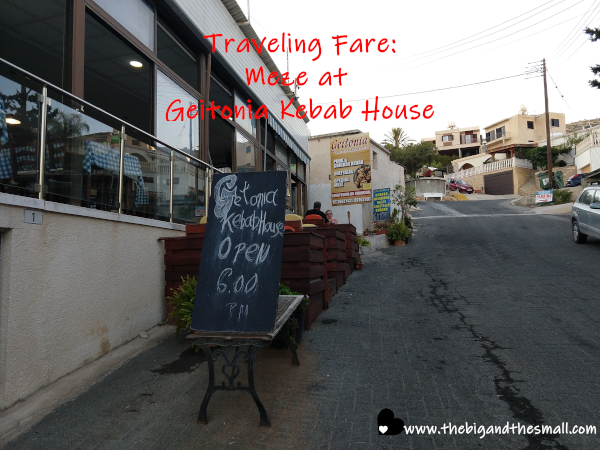 After we ate there my definition for meze was this: it must be Greek for "we keep bringing you food until you're so stuffed you can't possibly eat anymore but you have to keep eating because each dish we bring you is even more delicious than the last one". While not a proper definition it is pretty darn accurate! The real definition of meze is a series of small dishes or appetizers, similar to tapas that have been popularized in the States. Different places will serve different dishes under the meze title, but according to our hosts Geitonia's served the best meze, and it's only €9 to boot! (We've seen some menus have it as high as €20 a person). 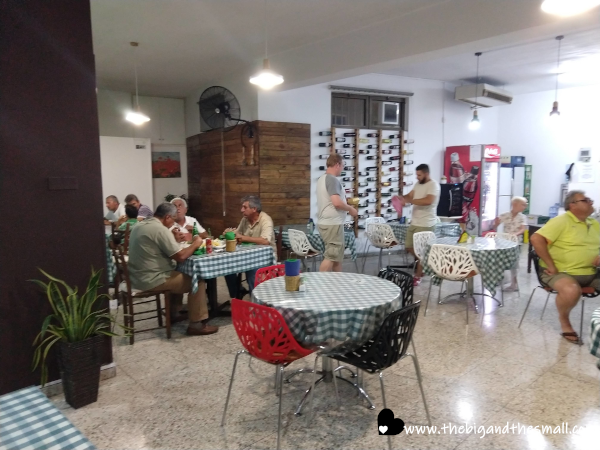 I was really excited for this meal - excited enough to willingly walk straight uphill for almost a whole mile when it was 85+ degrees outside. I dressed up a bit since this was a "date night" for us, and I haven't worn much other than my swimsuit and workout clothes during our time here so far. It was nice to feel a bit fancy rather than beach bum for a change. When we walked in the restaurant we were immediately greeted like we were old friends, and told we could choose our seat. (We picked one closest to the fan for obvious reasons). Without even looking at a menu we ordered the meze and were excited to see what it would bring!

The first dish brought out was what I am familiar with as a Greek salad - loaded with onions, tomatoes, Kalamata olives, and feta cheese. The salad course also came with a basket of pita bread (still warm!), a dish of tzatziki sauce, a dish of tahini, and a long dish filled with pickles, olives, peppers, and what looked like marinated celery. The salad was great, very fresh and crisp tasting, though I would have preferred fewer onions, and the olives had pits which I'm not used to (I'm spoiled when it comes to olives). The pita bread dipped in the sauces was amazing - the tahini was so stinking good we ended up asking for a second bowl of it later in our meal.

After the salad round came some Halloumi! Woot! This time the Halloumi was served with ham on the bottom and a sausage on top. Taking a bite of the two meat and cheese together was a flavor explosion, made even better with some of the lemon squeezed on top. I don't think I'll ever find Halloumi served in a way I don't like - what's not to love about grilled cheese?! 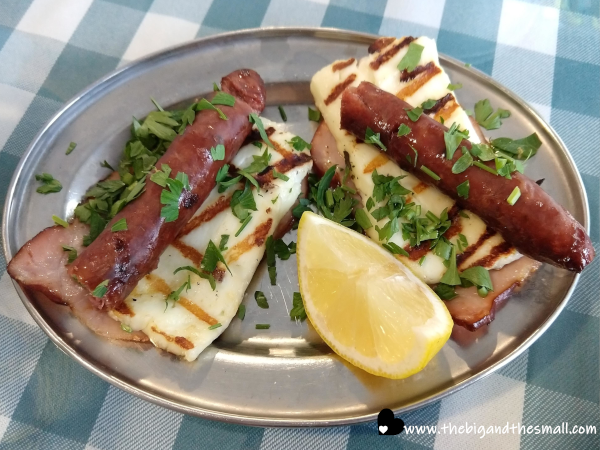 Next came what our served called "cous cous", though to my untrained eye it appeared to be a mix of cous cous and some kind of short pasta. It had a red sauce with some tomato and onion bits as well. I'm a sucker for carbs so this was right up my alley and it was excellent. I still had some sausage left from the last course so I tried a bit of sausage with the pasta and it was perfection. The courses were coming fast and furious so I had to eat quickly to get ready for the next one! 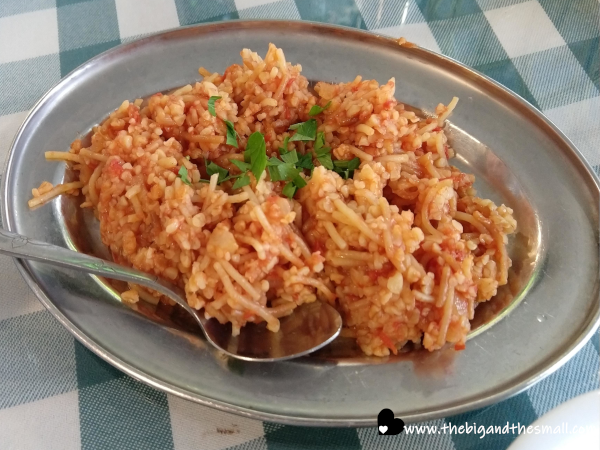 The next dish that came out was a small one, just two stuffed mushrooms. I wish we had about a dozen more of them they were so good! They came out super hot and even though Joel makes fun of me for liking my food "lava hot" even I had to wait a minute to eat these. The wait was worth it for these perfectly seasoned mushrooms stuffed with feta cheese. Drool...I seriously could have eaten a whole plate of them, although I'm glad I didn't so I had room for everything else! 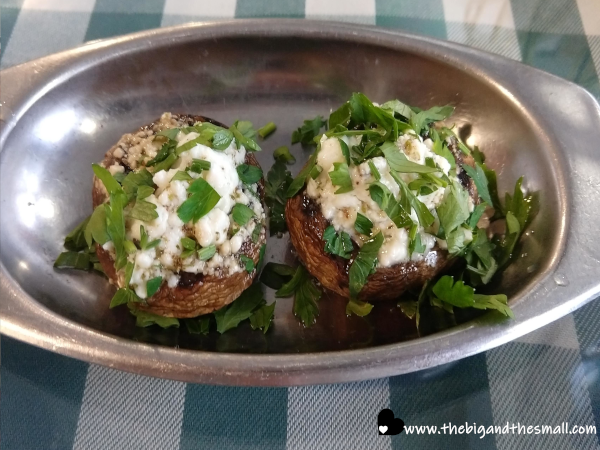 After that was a super familiar dish - french fries! They were nice and crisp and really went to the next level when I tried dipping them in the tahini.  Um, yes please! I'm gonna need all places with fries to start serving them with tahini from now on, ok? Thank you! Haha but really, if you ever get to try a fries + tahini combo take that chance, you'll thank me later. It was so good. 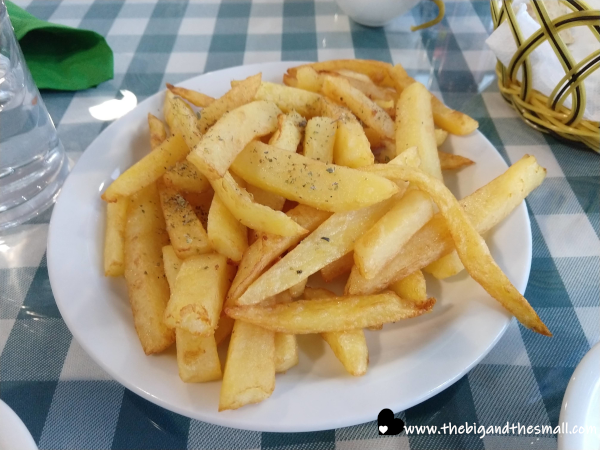 I was starting to get really full at this point but the food just kept coming, and just kept getting better and better! The next dish had a name I couldn't pronounce and don't remember, but when I saw it I figured out what it was easily - grilled eggplant absolutely smothered in cheese. I'd eat just about anything smothered in cheese (don't hold me to that) so I was ready to dig in. It was even better than I expected. Most of the smothering came from mozzarella but the bits that also had feta and that extra seasoning were off the charts good. I almost didn't let Joel eat his half of this one. 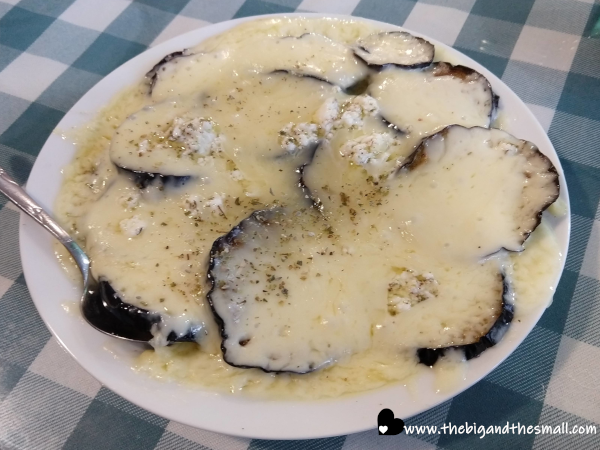 When the next round came I was getting really and truly stuffed, so I was only going to take a few bites and let Joel eat the rest. The waiter called this one "courgette and eggs" and I remembered from my days of French class that courgette is zucchini. Compared to the rest of the dishes we had been brought this one looked the least appetizing, and I was skeptical about the combination of zucchini and eggs. Surely this one wouldn't be very good. BOY WAS I WRONG. This was my favorite dish by far - and you know it's good when it beats out something smothered in cheese! Whatever seasoning they used on this was incredible and I wish I could buy it by the kilo. This dish was so good I've started buying zucchini at the market and adding it to our eggs every morning. It's not quite as good at home because I don't have the same seasoning, but it's still pretty darn good. 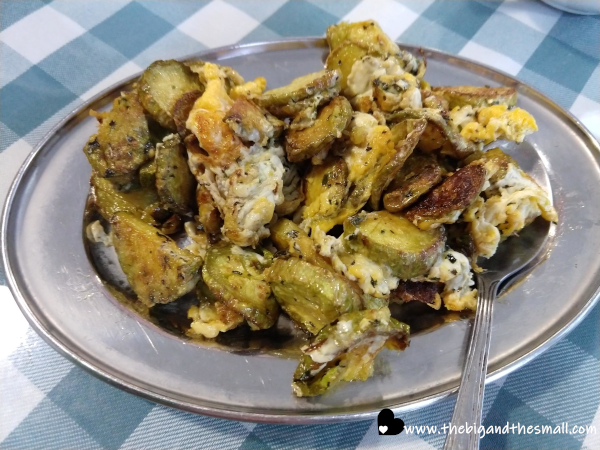 At this point I was desperately wishing I knew how many rounds there were going to be - I would have paced myself more at the beginning! I ate too much pita bread with tahini, not knowing how much room I needed to save for the rest of this deliciousness. What turned out the be the last round (besides dessert) came out and part of it was familiar to us - shieftalia! We felt like experts knowing how to eat this from our last encounter with it - we quickly added the olive oil, salt, pepper, and lemon before digging in. We were so stuffed we shared one sausage between the two of us, and the rest of the meat on the plate we brought home for leftovers. 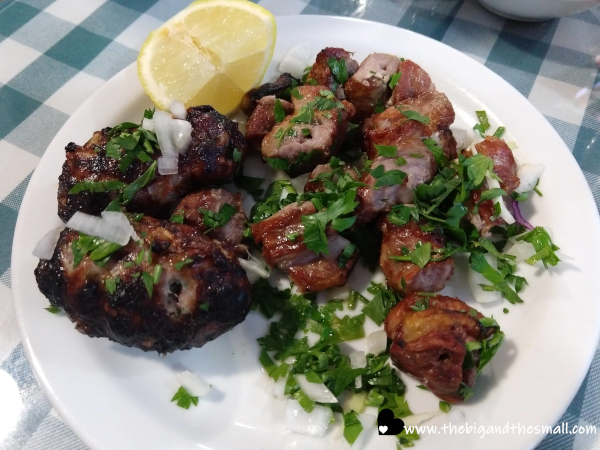 When we were all done eating we faced the same dilemma we've found at every place we've eaten so far in Cyprus - it takes a while to get the check. The atmosphere is just so much more laid back here - they aren't rushing you out the door to get the next customers in; you could sit around all day or night if you want to! When we finally tracked down our server again we learned that they only take cash here. We happened to be running low so Joel had to pop around the corner to an ATM to get some more. By the time he came back, I had also been brought dessert! 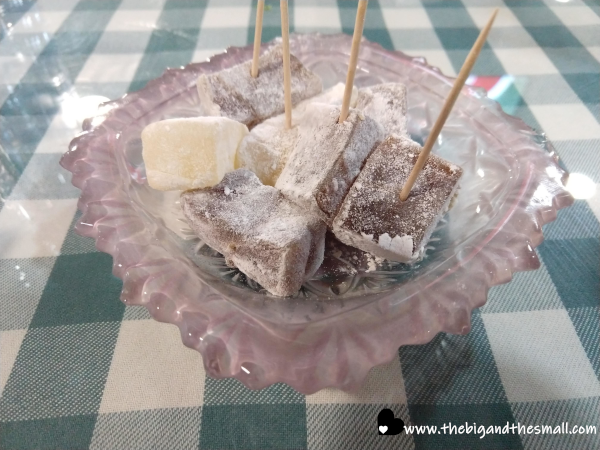 The waiter referred to this as "Cypriot Delight" when he brought it to me. It appeared to be some sort of gummy like candy doused in powdered sugar. I tried it, but it wasn't my jam. Joel enjoyed it however, especially the lighter yellow colored ones which were ginger flavored!

Overall we could not be happier that we chose to have this meal here. If you are ever in the Peyia area of Paphos this is a cannot miss meal at a fantastic local restaurant. At one point our server told us his mom makes all the food - he was so proud of her it was adorable! The staff was all incredibly friendly, the place was clean and neat, and the food was incredible. I'll be adding zucchini to my eggs for a long time thanks to them! Just make sure you bring cash so you don't have to make the same run to the ATM we did.

So what about you? Have you ever had meze? Is it on your list to try now? Out of what we had which one do you think you would like the most? Have you ever been caught in a restaurant without cash to pay with? (Please tell me we aren't alone in that). I look forward to hearing from you!

I'm so curious what their seasoning is... my guess is it would be kept simple - like olive oil, sea salt and pepper... and maybe some dill or basil? What's your guess?

I don't know! It was so magical, lol. It probably was something simple it just tasted so good I feel like it's something exotic. I bought some lemon pepper seasoning to use at home and it tastes pretty close, so maybe something along those lines?

... it looks a lot like Turkish Delight but I'm guessing since Cyprus plays a challenging role as being divided into Greek/Turkish sides that they wouldn't use that language for it. Did it taste like it or am I reading too much into a gel/starch-looking dessert?

Honestly I thought that too. I don't think I've ever technically had Turkish Delight but I've seen it and as far as I can tell they are the same. I'm guessing you're right in that it is the same thing, they just don't want to use that language on the Greek side of the island so they named it something else.