A Day in Paphos, Cyprus - the Small Things!

Our day in Paphos featured the two major highlights of seeing the Tombs of the Kings and St. Paul's Pillar. However, the day also included eating at McDonald's, two other restaurants I will write about soon, and a lot of small highlights! Today is all about the small things. 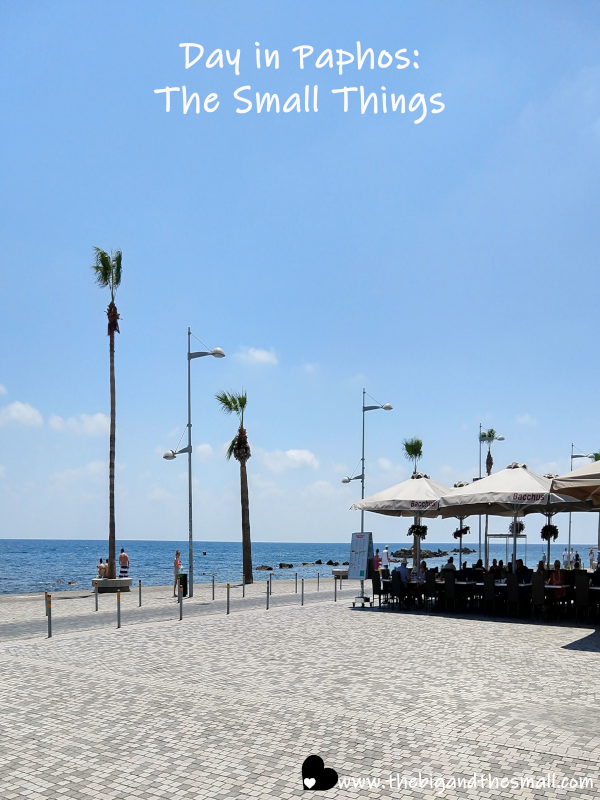 We started our day by dropping the dog off with some friends of our hosts, and getting a ride to the bus station down by the beach. [True story: I tried to get in the driver's side instead of the passenger side because I forgot it's the opposite here. Doh!] From there we paid €5 each to get an all day bus pass. "All day" is a bit of a misnomer as the coach turns back into a pumpkin not at midnight, but at 4pm. We figured if we stayed later we could just pay the one way fee to get home, which is €1.50 a ride. The bus took us along the sea most of the way to the city, so when there weren't buildings in the way we had some amazing views! If you follow us on Instagram you would have seen some of these views on our IG stories! (You can find us as thebigandthesmallblog). 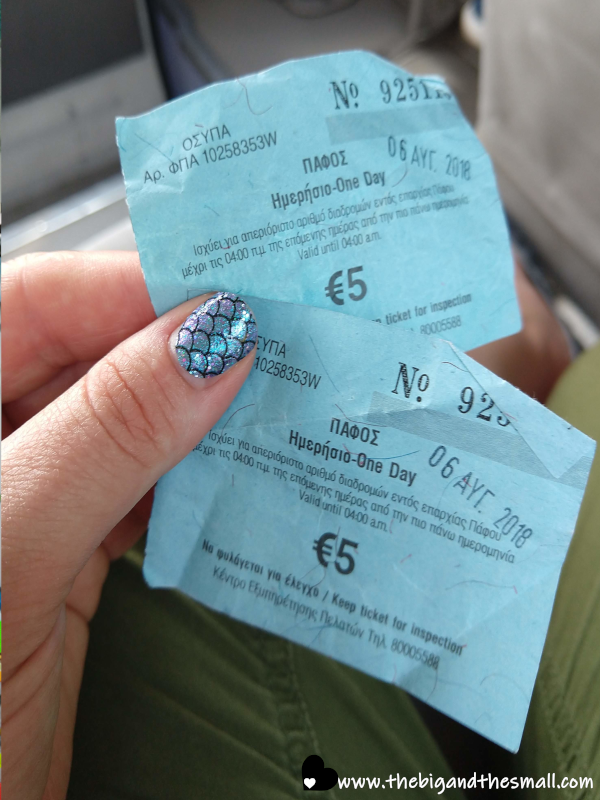 When we were wasting time before the Tombs of the Kings opened we walked along the main road and encountered many souvenir shops. As part of our blog income, we have a Patreon account. Patreon is a way for people who enjoy the content people create to support the content creators! When you sign up you usually get specific perks based on how much you donate and who you are supporting. We set one up last month, and have several tiers of support, one of which is "Souvenir Collector". If you sign up at this level, at each location we visit we will pick out a souvenir just for you and ship it to you! We also have a "Postcard Pen Pal" level which means we will send you a postcard and personal message from each place we visit. If you are at all interested you can check out our Patreon here. All that to say, we were looking for some souvenirs for our patrons. I advocated for this one: 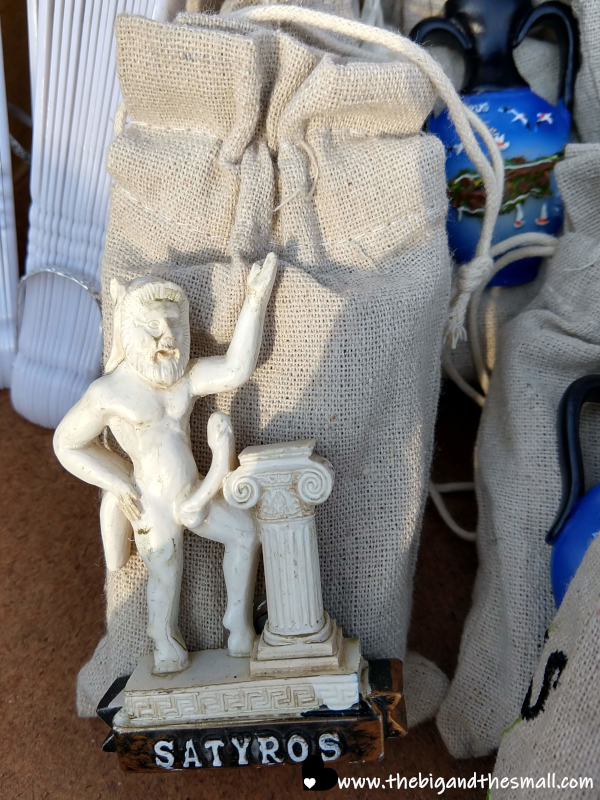 Fortunately (unfortunately?) for our patrons Joel vetoed that one. But no worries, whatever we do find for our supporters will be just as epic! Also along this road were a ton of car rental places, four wheeler rentals, and bus tours that could be booked. We chatted with a few places, briefly debated renting a car for a few days and packing in as many places as we could, but after checking the prices of both car rentals and the bus tours, we figured we could recreate these trips on our own for less. The bus system here is actually pretty decent and fairly well priced, as long as you plan ahead well. I snapped a pic of one of the bus tour signs, as I want to recreate some of these trips for ourselves! 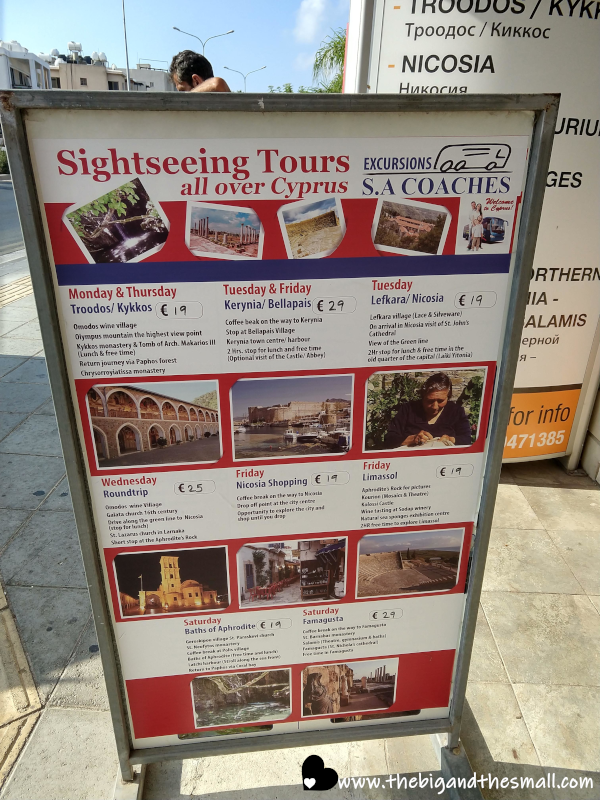 After the Tombs of the Kings and St. Paul's Pillar, we had some time to wander down by the harbor. This is another tourist heavy place in Paphos, with even more souvenir shops and rental places. Down here there were also some cute boutiques and clothing shops! We got drawn in by one that some gorgeous dresses in the window, and the shop owner herself was wearing one that day. She offered us a good deal, but I am not planning to buy any new clothes until I lose some more weight. Instead I took a picture to remind myself of something I might want to get some day! 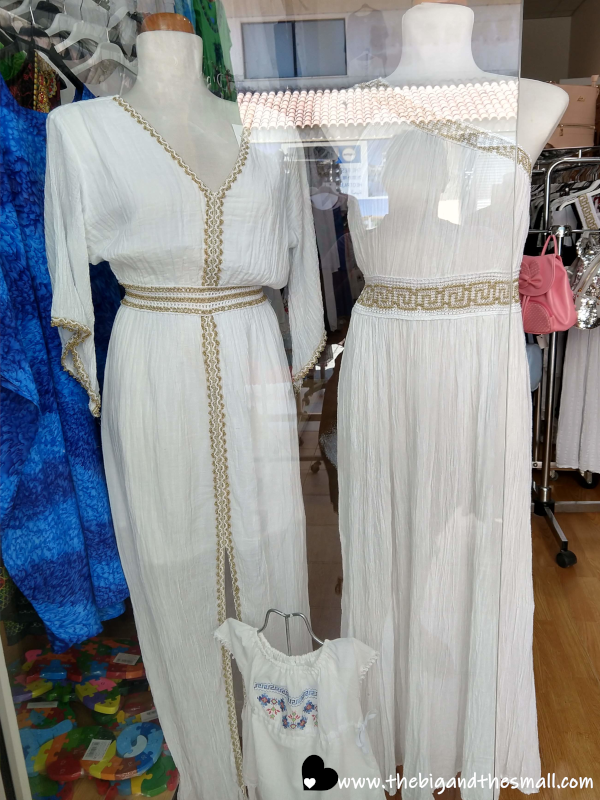 I realized after just talking about losing weight this next part might seem silly, but after eating three times already, we couldn't resist a little something sweet before we went home! Enter: ice cream. There were a ton of places along the water - gelato, frozen greek yogurt, but eventually went with the place that had the best price we could find - a dollar a scoop! (Ok a Euro a scoop, but close enough). 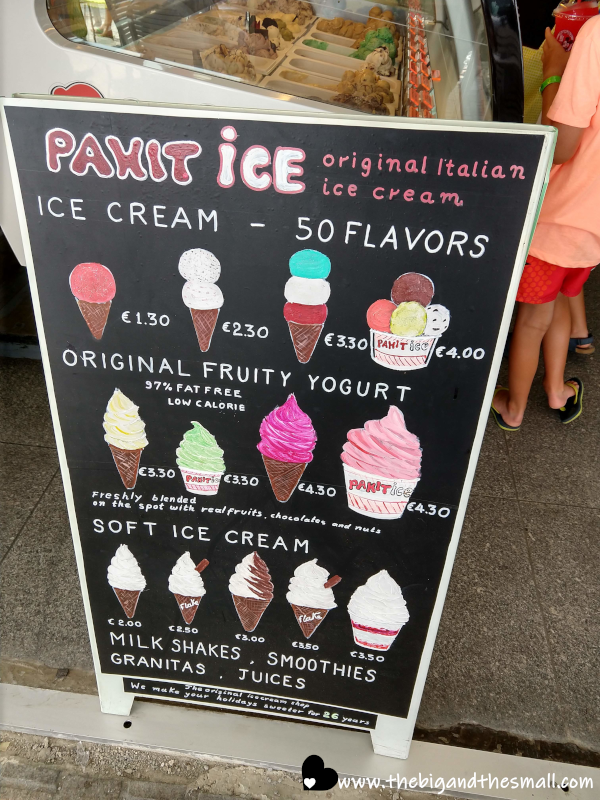 Even after everything we squeezed into this day, it was only about 2:00. The sun was hot (have I said that enough yet?) and we have perhaps gotten a little too used to taking our afternoon nap here. We decided to head back before that 4:00 deadline so we wouldn't have to pay anymore for bus tickets. From the harbor we got on a bus that took us all the way back to the beach we had been dropped off at in the morning. From there we knew a bus would come at some point to take us up the hill to Peyia. The one that came first didn't actually go to the stop we expected, it went all the way up into town. However, we figured we would rather walk half a mile downhill to our apartment rather than two miles uphill from where we currently were. A gentleman who was translating for the driver kept asking us where we were going/where we lived to make sure we weren't going the wrong way. We told him we live near Savvas Grill, a restaurant about two blocks from our place that has turned out to be a very helpful landmark. On the way up to the real bus stop we passed Savvas Grill, and to our suprise, the driver stopped and let us out! We were ever so grateful not to have to do any extra walking at the end of a long day.

We went home and crashed before picking up the dog (we did try but they weren't home at the time!). We slept for almost three hours! It was a long day of adventuring but well worth it. I can't wait to venture out on the island again soon!