The Bus Ride to Almost Nowhere...

I've covered so far how we made it from Texas to Iceland, then to Paris for our quick six hours in the city. The next part of our journey centers on how we got from Paris to Vienna.

This is where we made some mistakes in booking our travel, and while I say "we" it was totally my fault.  Joel asked me if I wanted to spend extra time in one city, or take the train and get to see a few more places.  I remember train trips fondly from my earlier trips to Europe, and the idea of seeing more places was, of course, appealing.  So I said 'yes, please!' to a meandering train ride through the countryside.  I pictured comfortable sleep cars on the train (did that once, it was pretty great!) and hours spent watching the gorgeous views speed by.  I pictured having time to at least hit the highlights of a few more places.  I was completing forgetting the fact that we would have all of our luggage with us, making exploring any city basically impossible.  (We aren't packed as backpackers after all).

My daydreams were quickly dashed when the reality of our travel to Vienna set in.  It started with catching a bus at close to midnight in Paris.  We rode with Oui Bus, and the bus itself wasn't so bad. It was clean, had fairly comfortable seats, came with free Wi-Fi, and each seat had a USB port so you could charge a phone and/or other electronics.  Pretty good as buses go.  Our ride was from 11PM to 7AM, and was to take us from Paris, France to Karlsrhue, Germany.

We settled in, even getting seats across from each other so we had more space, as the bus was not full.  I plugged in all my electronics, and tried to get some sleep.  Unfortunately, I was wired.  Despite the late hour and the darkness I was not tired at all.  So I passed the time watching movies and shows on my tablet, and wishing the air conditioner was stronger (it was hhhhhot on the bus).  Things seemed to be passing uneventfully, the bus would occasionally stop and some riders would get off while others got on.  There was a screen at the front showing each stop the bus would make and the ETA at each location.  Ours was the final stop and still about two hours away as the morning light began to shine.

We came to one stop, the third to last on the screen, and suddenly, everyone but ourselves got off the bus.  Well "that's odd," we thought, but we double and triple checked our destination and the map screen, and shrugged it off.  We sat there for a few minutes, and then a few more, and started to get that uneasy feeling you get when things are going wrong.  Finally, the driver came to the back of the bus and began to wave us off.  He didn't speak any English, but it was clear he was telling us this was the end of the line for him.  Uh, what?  We are a full two stops and two hours away from our destination?  What on earth?

He tried to tell Joel that a bus just ahead of us was our next bus (despite no transfer ever being communicated to us by Oui Bus).  Joel quickly went to check, and learned that bus was returning to Paris.  The driver continued to indicate that we were to get off here, so we packed up haphazardly, and pulled our big luggage from below deck.  We joined other travelers milling about and started to wonder how the heck we were going to get to Karlsrhue.

We started asking around for anyone who spoke English.  One couple did and pointed us in the direction of a train station (several blocks away) and said we could try our luck there.  Another couple pointed us towards a map on a wall.  We trudged over there and found a couple young Americans who were also dropped off earlier than expected.  Unfortunately the map on the wall did none of us any good as it was completely unreadable for us.  Joel jumped into problem solving mode and started researching things on his phone, while I stood there holding back anxiety tears.

When I get stressed out or thrown into an unexpected situation, my mind tends to go to the worst case scenario.  We are stuck here!  We are never going to get to Karlsrhue which means we will miss our first train which means will miss all the other trains, which means we'll miss our flight to Cyprus... I was spiraling.  I didn't say any of this out loud so as not to distract Joel, but my mind was definitely going to some dark places.  Just as I was getting to the point in my spiral where we missed our house sit, everything else fell through, and we had to return to the US with our tail between our legs, the driver of our bus came running towards us, waving his arms to get our attention.

Yay!  Relief!  He must have realized his mistake and is putting us back on the bus to take us the rest of the way!  Well, not so much.  Instead, he took us past all of the buses to an all black unmarked 8 passenger van.  A guy standing at the van took our luggage, packed it in the back, and motioned for us to get in.  Um, ok?  Joel did his best to confirm that this ride would take us to Karlsrhue, and everyone just kept nodding.  Another family was inside and they said that's where they were going, so we decided to try our luck.

As soon as everyone was settled in the driver took off at break neck speeds.  Joel admired his driving skills while I stared out the window at the countryside.  This ride was a bit cooler than the bus which was a blessing, but there were no longer charging ports and Joel's phone was on a low battery (remember, we thought we had two more hours with the charging stations on the bus).  We also felt kind of bad for our fellow passengers, being cramped into this small space quickly made us realize we were still in the same clothes we had left Texas in, now a full 48 hours and whole lot of sweat later. 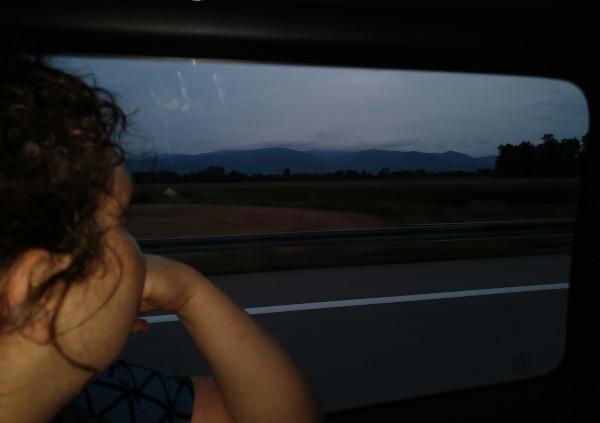 On the bright side, the van was so much faster than the bus we got to our destination a full half an hour earlier than expected.  The views as we drove were quite lovely, and I even got excited about some cornfields that we passed.  (I love any glimpse of home when I travel!).  We were dropped off a couple blocks away from the train station, but after almost getting left a couple hours away, we were glad it was within walking distance.   The extra time meant we could take our time to have some breakfast! 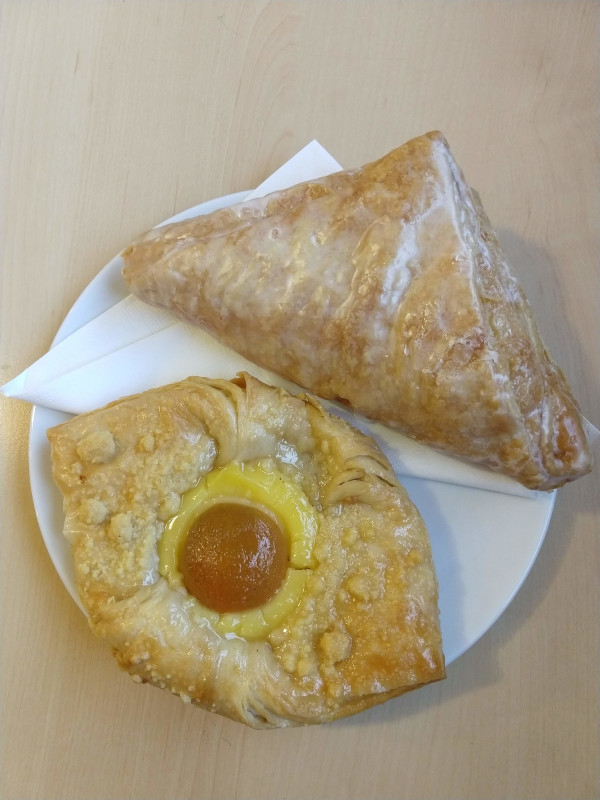 We picked two pastries, one sweet with an apple filling, and one savory with an egg on top!  Haha, just kidding.  That was not in fact an egg, it was an apricot cooked and placed in such a way as to look like an egg!  It was quite delicious, even if not exactly what we were expecting.  I cannot live on sweets alone (although Joel happily would) so after the sweets we got a sandwich as well. 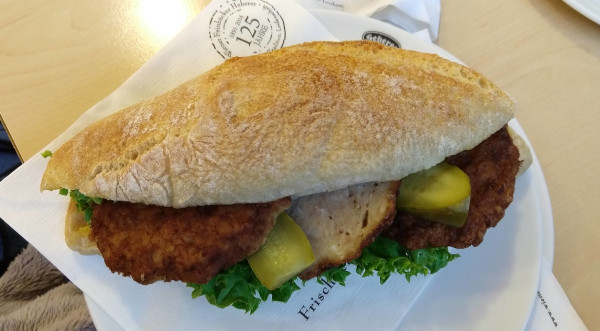 We wanted to get something extra German, so we went with a pork spaetzle with pickles and lettuce.  The sandwich was cold, and while I would have preferred it warm (I think) it was still tasty.  For all three of these treats, our total was less than 5 euro!

After eating and taking some time in the bathroom to freshen up (cost 1 euro to get in!), we found the platform for our train and settled in to wait for half an hour.  And then began our train adventures.  I had every intention of sharing those in this post as well, but I think I have rambled on for long enough today!

Tune in tomorrow to find out about our train rides that included both a bachelor and bachelorette party!