McDonald's Around the World: Paris, France

Last week I wrote about our short time in Paris, the three goals we had to meet, and how we just barely accomplished all three.  Goal number 2 was to get food at McDonald's and I promised a full post on that experience, so here it is!

Now the first thing you might be saying yourself is "What?  They had six hours in Paris and chose to eat at McDonald's?  Are they crazy?" or perhaps just "Typical/Crazy American, six hours in Paris and choosing to eat at McDonald's" accompanied by a generous eye roll.  I realize it seems an odd choice, but we did have our reasons.  We wanted to eat quickly (remember only six hours!), cheaply (uh, it didn't turn out as cheap as I thought), and while we had a rental car to easily get us places, parking was darn near impossible!  Plus we plan to eat at different McDonald's restaurants around the world as a blog feature, and most importantly, I plan to return to Paris at some point for a real visit.

So for all those reasons, McDonald's was our goal and after buzzing by the Eiffel Tower off we went to find one.  After trying (and failing) to find one in the city that might have  a drive thru (we drove by several in surprisingly close proximity to each other) we settled for one on a corner.  Then we tried (and failed) to find parking so we could both go in together.  This involved driving around the "block" that was really more of a meandering circle of sorts.  Finally, fed up at the time we were wasting, Joel dropped me off on the side of the road and said he would wait there with the car while I brought back food.

Well, I was not exactly excited at the prospect of navigating a foreign restaurant all by myself (even one as familiar in its own way as McD's) but off I went.  He accidentally dropped me off further than he thought, so I had about a two block walk back to the restaurant.  I took a quick picture outside, steeled myself, and went in! 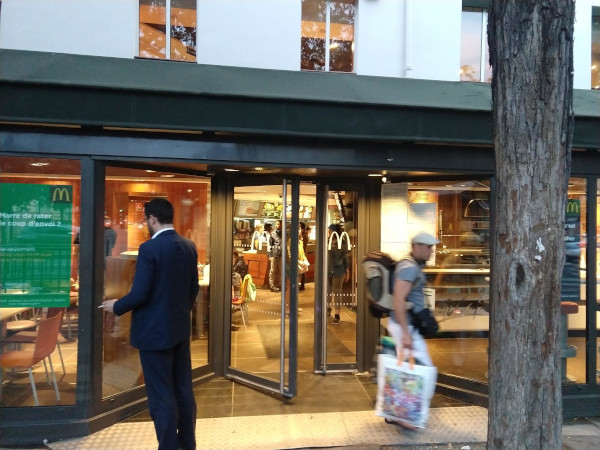 The inside was quite a bit different than I expected, instead of walking up to the counter like all the ones I've been to in the states, there were order kiosks everywhere, like, about a dozen of them.  I found one the furthest in the corner (no need to embarrass myself publicly as I try to figure one out) and got to work figuring out what the heck to order.  Now our goal is to always order something that we have never encountered on the  menu before.  Also here I was tasked by Joel with ordering a "royale with cheese" which is apparently some sort of reference to the movie Pulp Fiction (I've never seen it so I don't know). 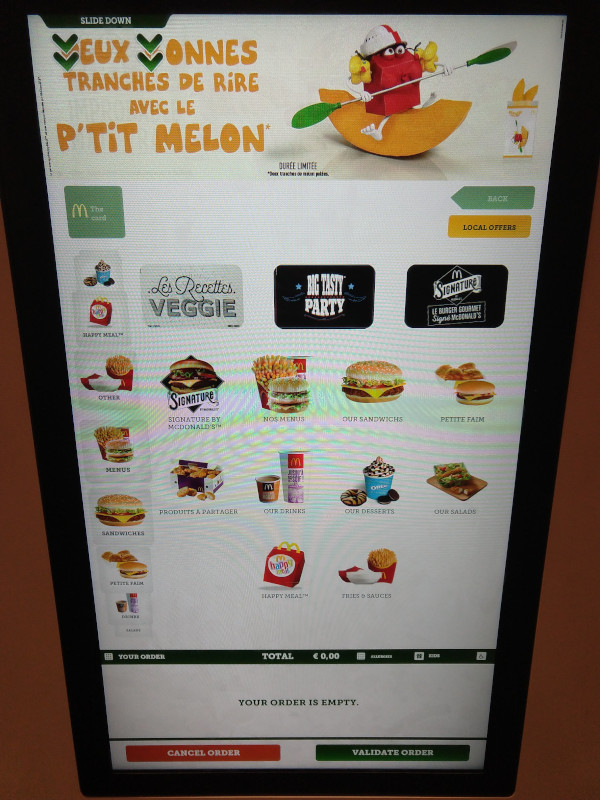 The screens had options in French and English so it wasn't too hard to figure out.  There were just so many choices it was a tad overwhelming!  I settled on Joel's royale with cheese in a meal combo, and something called a "Big Tasty" in a combo.  I mean, with a name like "Big Tasty" you can't go wrong, right?  In the meal options you could choose between regular McD's french fries, and wedge cut potatoes, so of course we had to try one of each.  For drinks I got us both Coke Zero to keep things simple. 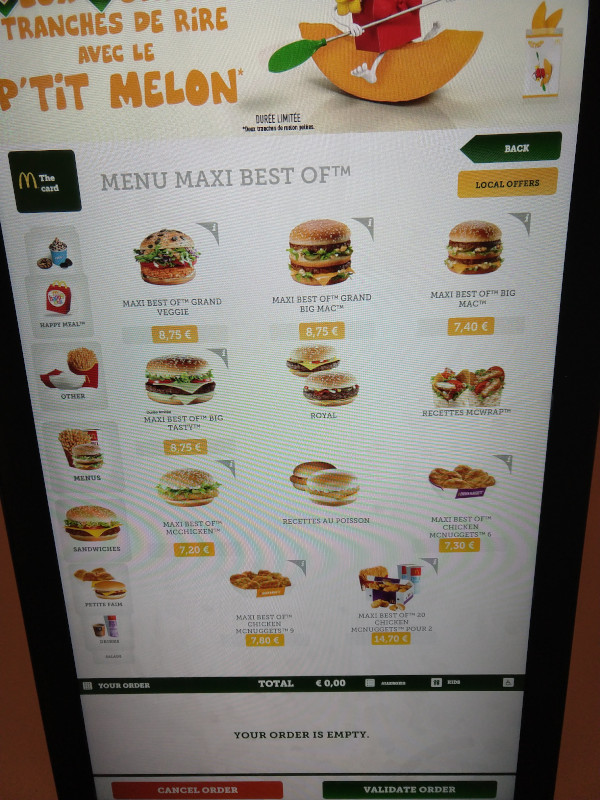 So far, so good, it was easy enough.  The trouble came when it was time to pay.  I was given two options, neither of which really made sense to me.  The one on the left seemed like the most credit card like option so that's what I chose, and I was taken to a pay screen.  I swiped my card, declined.  Swiped it again, wouldn't go through.  The third time did not, as promised, work like a charm.  I checked my phone, Capital One was telling me each purchase was approved, even as the McDonald's kiosk said it wasn't working. 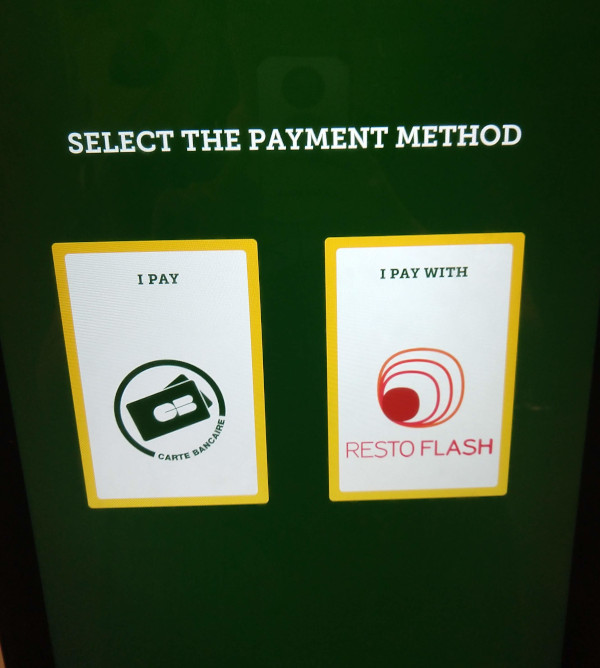 Then all of a sudden I was given a screen saying my order was complete.  Yay?  I shrugged, took my receipt, and went to the front counter.  The wait was seconds before someone was open, and thankfully the young woman waiting on me seemed used to dealing with confused foreigners.  She told me my card did not work at the kiosk so she would try it again on her system.  Still no luck.  She also said they had been having problems all day with foreign credit cards.  Who would have thought that the first place our card gives us trouble is such an international chain?  You would think they would have systems to handle this. So now I need to pay with cash, but I, like a dummy, had only brought in my credit card.

I told the lady at the counter I had to run out to get cash from my husband, and she said she would get my food ready while I did so.  Thankfully while I was ordering Joel had pulled up significantly closer, and had sent me his location using Google hangouts.  So I popped out round the corner, found him, and grabbed cash.  I went back inside, paid the lady, and got our food, significantly relieved to be done with this task.  For two meals each consisting of a sandwich, fries, and a drink, our total was about 18 euro, which is close to twenty dollars!  This is significantly more than I have ever spent for just the two of us at McDonald's before but I chalk it up to two things: 1. Paris is an expensive city (as so many people have told me!) and 2. I was so flustered at the order kiosk I didn't exactly price hunt for the best deals.

I returned triumphantly to Joel and the car with our food.  We scarfed it down in the car while struggling to fill the car with gas and find where to return the darn thing, so I don't have any pictures of what we ate (I know, bad blogger).  However, I can tell you it was delicious.  The royale with cheese is just a quarter pounder with cheese so it was pretty typical.  The wedge fries were good, they had a coating and seasoning on them that was quite tasty, and came with a mayonnaise like dipping sauce.  I prefer the regular fries in general but it was fun to try something new.  The Big Tasty was fantastic - it was a much bigger patty than you usually get, had a white cheese that was quite good, and some sort of special sauce.  It was a huge burger, and while a little messy to eat in the car, definitely worth it.

Perhaps my biggest surprise was how different the Coke Zero tasted from what I am used to!  I drank a lot of it before we left Texas (having just discovered I prefer it over Diet Coke), so I was expecting a particular taste.  What we got was quite different - it had a much sweeter taste than I expected, and almost had a cinnamon aftertaste?  It wasn't my kind of drink so Joel was happy to chug both drinks.  We ate the last of our food in the parking deck where we returned the car, and were sufficiently fortified for our longer than expected trek to the bus station.

Overall the experience was more stressful than I would have liked (figuring out the kiosk, having to run out for cash, deciding what to order, oh my!) but I'm glad we tried it.  It was definitely more expensive than I expected, though I'm sure there were cheaper things to order.  The food was all quite good and a different experience than we've had in the states!  So there you have it, what it was like for us to eat at McDonald's in Paris.

If you have been to a McD's in Paris, I'd love to hear about your experience!  Did they have other new to you things you tried that we didn't?  Was the ordering experience like mine or more typical to an American one?  Tell me all about it in the comments!