Our Six Hours in Paris

When last we left our journey, we were boarding our flight from Iceland to Paris.  I have been to France before but never Paris so I was so excited to get there!  I knew we wouldn't have long to see much of anything, but we had three goals for our six hours in Paris.

Our flight was uneventful, the airport was easy to navigate, and all of our checked luggage came up on the baggage claim.  Success!  But then...it fully hit us.  We now had to navigate Paris with all of our luggage.  This is 44 pounds of checked baggage, 26 pounds in our carry-on, plus our personal items (we didn't weigh those).  Now granted, we had realized this before (after we booked our travel, or we would have done things differently).  But when you actually start carrying all of that with you...you realize just how heavy it is.

We had discussed this dilemma with our family back in Texas, and Joel's cousin Christopher suggested we rent a car.  Even though it's only for a short time, it would give us a place to store our luggage and the freedom to go where we want.  After landing and price checking other options - 80 euro for a taxi, 50 euro for the train, both of which would take us straight to the bus station, fulfilling goal 3 but bypassing goals 1 and 2, we opted for the car rental.

Y'all, we were warned that time moved slower over here.  People aren't rushed like in the US, even in service industries.  They. were. not. kidding.  It took us a little over two hours to rent a car.  And this was with an online reservation that Joel made while standing in line.  I got the fun job of sitting and guarding our luggage while Joel stood in line for over two hours.

When we finally got our car, the guy at the actual car handing out place saw all of our luggage and immediately upgraded us a notch.  The car we got was small and barely fit our luggage, I can't imagine what the original one was supposed to be.  A glorified scooter? 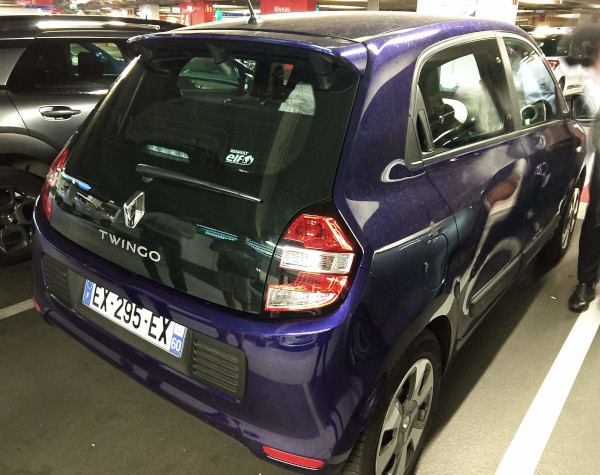 Then it was time for the real adventure - driving in Paris.  The rental car staffer warned us that Paris drivers are crazy.  He told Joel to "be aggressive or they will run you right over".  Well, if you've ever ridden with Joel you know that was music to his ears.  Joel is a naturally aggressive driver so we were sure he would fit right in with Paris drivers.   When we got in the car we realized it was a stick!  I have never driven one in my life so thank goodness (for so many reasons) that Joel was in charge of driving.

We set out with our GPS guiding us to the Eiffel Tower, determined to knock out goal number 1.  We quickly learned that there are three speeds in Paris: the actual speed limit which seems to be followed only by truck and bus drivers, the higher speed limit followed by all cars, and then, in a category all their own, the motorcycles.  Holy moly I have never seen such crazy driving outside of a Hollywood movie chase scene.  The motorcycles weave in and out of traffic with seemingly little regard for the people around them or their very lives.  It was exciting and terrifying to watch!

Also traffic rules in Paris are... different.  Many roads don't have markings.  There are a lot of traffic circles and they are the definition of a free for all - literally no lines, no order, just jump in and push through till you get where you are going.  Joel loved it; I might have covered my eyes a time or two.  It is definitely an experience, and one I don't recommend to anyone who is not an experienced and comfortably aggressive driver. 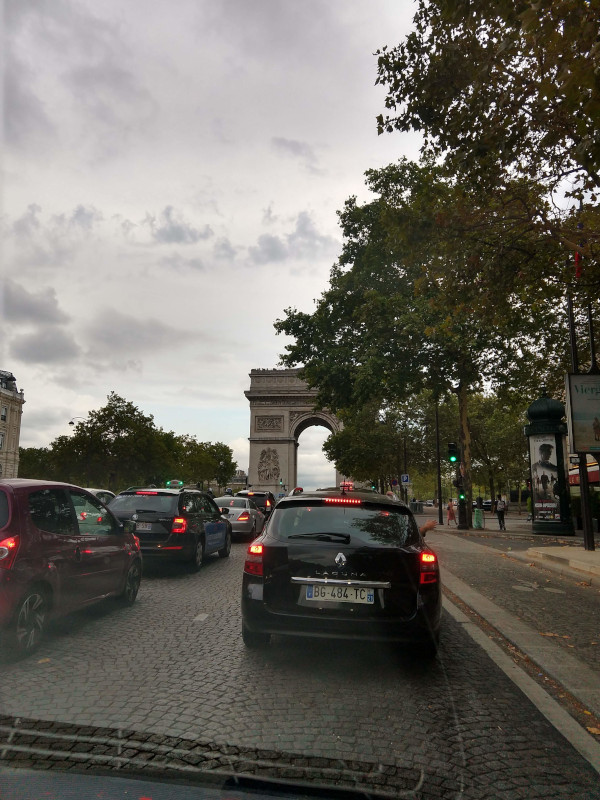 Of course as we were driving it started to rain, nothing major but enough to make navigating and reaching our goals just a little more difficult.  But we made it to the Eiffel Tower!  We drove by... and quickly realized Paris has the same parking problem as most major cities - as in it is scarce to non-existent.  Plus we couldn't actually read any of the signs, so places that might have been parking we weren't sure about, or didn't know if we needed to pay something somewhere...long story short we decided to stay in the car.  So this is the best shot of the Eiffel Tower I could grab. 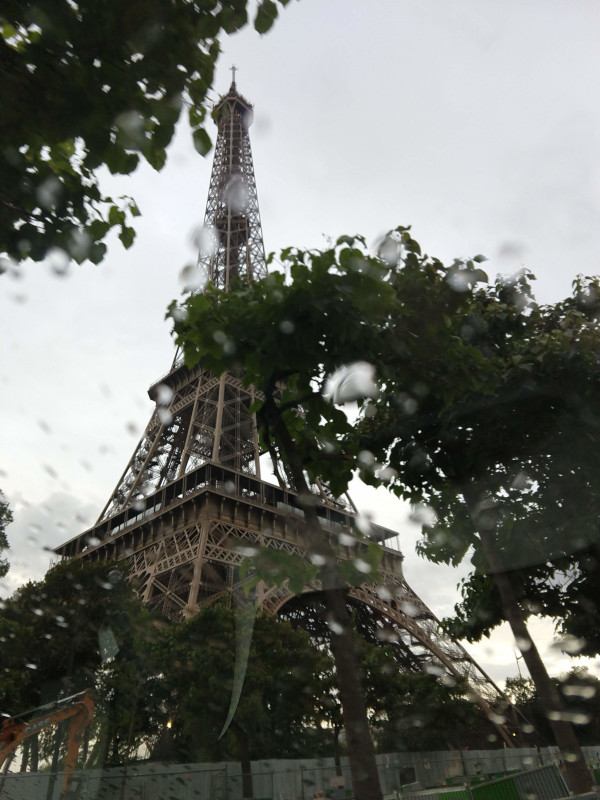 I definitely want to go back someday for the full experience (see it light up at night!  perhaps even go to the top!) but this was enough for now.  I kept reminding myself we are just starting our European adventure, no need to squeeze it all in right now.  So we turned our attention to goal 2 - McDonald's.  We hadn't eaten all day so we were starving.  We navigated away from the city center hoping to find a McD's with parking - turns out that was a laughable goal.  We ended up with Joel dropping me off and I had to run in and navigate a Paris McDonald's all on my own - that will warrant a blog post all its own!  Suffice it to say we got food, accomplishing goal 2, and turned our attention to goal 3, getting to the bus station for the next leg of our journey.

Our first order of business was finding Gare de Lyon, where we could return our car.  The GPS took us straight there, but we could not for the life of us find the "Enterprise Rent a Car" sign.  Every time Google told us we had arrived we looked around and couldn't see anything indicating the right location.  Finally we resorted to plan B, Joel would once again drop me off and I would go into the bus station and ask if anyone knew where we were to return the car.  I directed Joel to pull over so I could hop out, and as he did so, lo and behold I spotted the teeniest tiniest Enterprise sign in the world, indicating we were to drive into this underground parking garage! 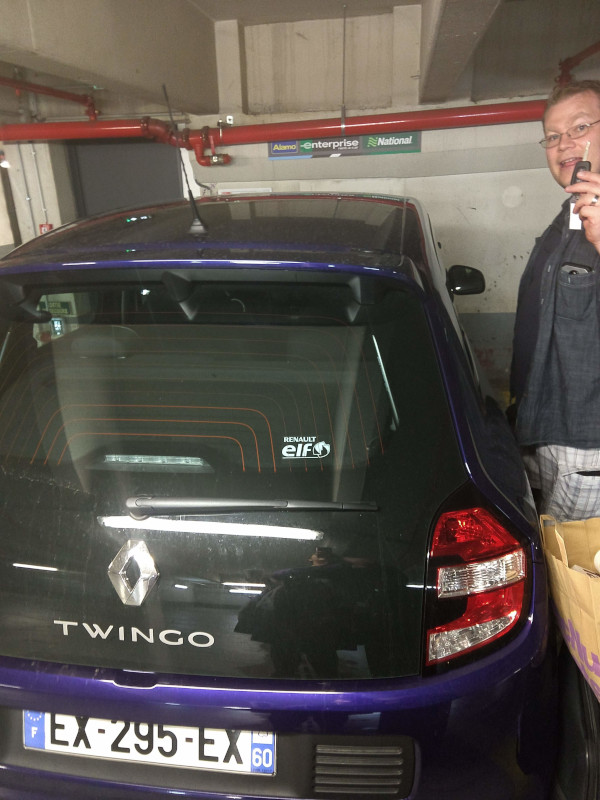 We finally found the right place to leave the car, dropped off the keys, and set out to get to the actual station we need to be at, Gare de Bercy.  The rental guy had promised us that it was a short walk from Gare de Lyon.  "Two maybe three blocks," he had said.  Well.  I don't know how long a block is in his mind, but it was definitely further than that.  We found a sign pointing us in the right direction, which also kindly informed us that we had 870 meter walk ahead of us, which is a little more than half a mile.

Now, normally a half mile walk is quite pleasant.  But remember our situation - it's after 10pm in Paris, a large city, it's sprinkling off and on, we have to get to our bus station in time not to miss our bus, and we are carrying about 100 pounds of luggage each.  Also I have one blister on my left foot and a total of five forming on my right foot.  This walk was tough.  It's not exactly how I pictured my time in Paris.  Nothing glamorous or Instagram worthy here folks.

In the end we made it in plenty of time to the station, found where the bus would be, and had about a twenty minute wait until our bus actually arrived.  This is our "we made it even though we are exhausted" selfie.  [Yes we are wearing the same clothes as when we left Texas.  With no shower and no good place to change up till now it just didn't seem worth changing clothes yet...] 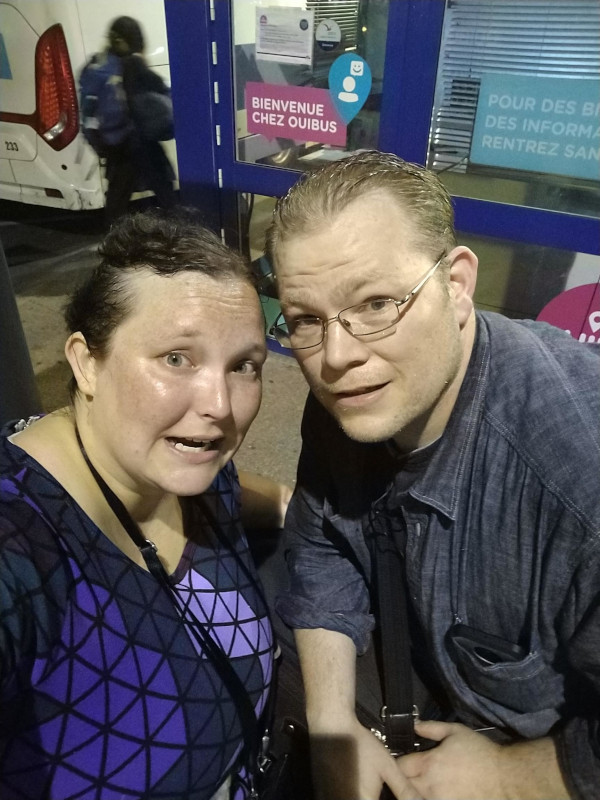 So despite difficulty, we accomplished our three goals in Paris: we saw the Eiffel Tower (however briefly), got food at McDonald's, and made it to the bus station.  Stay tuned for my next post to read all about the bus ride and how they tried to strand us in the middle of nowhere!

Way to hit all of your goals! My thoughts of Paris: Most of it was "Nothing glamorous or Instagram worthy here folks." ;) It will help when you go back to have a very loose schedule as your preview has shown you. Everyone was either off or "on Strike" Monday-Wednesday. The Eiffel Tower took 3 visits to make it to the top (closed for wind, weather, or because they could). Looking forward to hearing your take on Paris McD's.

Haha, I'm glad others have had non-IG worthy trips.  I've started following other travel bloggers/instagrammers and so many of them edit their photos so heavily they practically aren't real anymore.  We plan to be realistic as heck in our travels, but I have to watch that comparison trap!  Good to know about needing a loose schedule, and at least the third time was a charm for you to make it to the top!  How as the view?

As a photographer, I felt slighted that ALL night photographs of the Eiffel Tower are considered under copyright and you need express permission to reproduce them. That being said, the view was pretty great from below and above, I recommend standing under and looking up. After so many attempts, it felt like such a victory to get to the top that it added to the joy. The line was pretty long if I remember correctly. I love any opportunity to go as high as possible in a city, so I look for those places. You can also go to the top of Notre Dame and get up close and personal with the gargoyles.

All night photographs are under copyright?  Like, even one an amateur takes with a cell phone?  That's crazy!  I, too, love to go high any chance I get in a city.  The views are always amazing.  I hadn't thought about Notre Dame but that is now on my Paris list for when we go again!  Along with the Louvre, the catacombs, and of course the tower again.

Speaking of the catacombs, when I was there you could also tour the Parisian sewers, I think it was a museum technically in the sewers but all I remember is that it is IN the sewers. It's as stinky as it sounds so not every tourist ventures, therefore I'd recommend it as a blogging feature if it's still around. But wear a scarf so you can cover your nose without too much attention.

Well that certainly sounds like an off the beaten path tourist attraction.  When we make it back someday that will be on my list!  With definite scarf wearing, lol.