I'm always going to do my best to blog in real time, but when we have a lot going on I might get behind at some points.  This is one of those points.  I am currently sitting on the couch at our housesit in Cyprus, looking out at a gorgeous view of the Mediterranean and the mountains, but as I have yet to write about our journey to get here, I need to back up a little bit!  If you want to make sure you are following along with us in real time, check us out on Instagram (@thebigandthesmallblog) where I post daily pictures and updates.

So let's go back in time exactly one week, to the day we left Texas! We then had four days of travel ahead of us to get where we are now.  We flew from Dallas to Reykjavik, had a seven hour layover, then flew to Paris.  From Paris we took an overnight bus to somewhere in Germany, then rode trains to Vienna.  We got about six hours in a hotel in Vienna, then got up at 3:30AM local time to fly to Paphos, Cyprus!  Are you exhausted just reading that?  Wait until you hear about all the snags and roadblocks we hit along the way.  It was far from smooth sailing, and looking back, we definitely would have done things differently.  Those stories to come, so you can learn from our mistakes!

The first part of the journey however, went really well.  Our first flights were booked with Wow Air, a budget airline with bright purple planes!  I literally said "wow" the first time I saw one on the tarmac, so I guess we know where the name comes from.  We were shocked at how smoothly check in went, and I did a little happy dance that our luggage was not overweight.  We spent literally 15 hours packing (at least), weighing and re-weighing everything a million times to make sure we did not go over 20kg for our checked baggage (44 pounds).  If we had gone over it cost $20 a kilo, which is $10 a pound!  So not worth it.

Getting through security in the USA is kind of a giant pain, but we made it through anyway.  As I was repacking my things after the inspection, I saw the person behind me getting checked had brought through homemade tamales - um, yum!  This is also when I realized that we had forgotten to pack snacks...which meant we would be subject to overpriced airport/airline snacks until we got to Paris.  Whoops.

Boarding was easy, and our seats were perfect, two together on the right side of the plane which meant Joel got the window (his fave) and I got the aisle (my fave).  Here are our excited faces!  [These two kids had no idea what they were getting into...wait until you see our selfies in these same clothes three days later, LOL.] 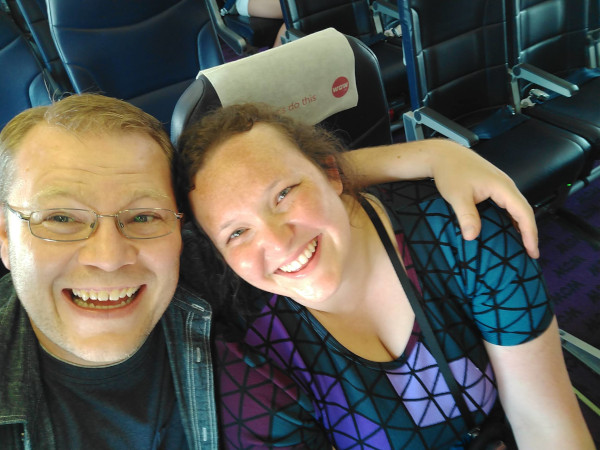 This flight lasted 8 hours, and really was surprisingly comfortable.  But another thing we did wrong - we forgot to fill up our water bottles after getting through security!  Rookie mistake.  And since we flew on a budget airline, literally nothing was provided (besides our seats, haha).  Not even water!  I was so thirsty we ended up having to pay $3.50 for a bottle of water, ugh.  We learned our lesson there!

Before we left Texas I downloaded an entire season of Supergirl to my tablet, so that's what kept me occupied on the plane. Thank goodness for technology!  I also noticed that in airplane mode my tablet battery lasts a lot longer, woot!  Other than almost dying of thirst the flight was pretty uneventful.  As we flew into Icelandic airspace, Joel pulled my attention to looking out the window.  As we got closer to the airport we realized...there is NOTHING around the Reykjavik airport.  Joel had high hopes for leaving the airport to explore a little bit, but there is nothing within walking distance.

We got off the plane around 5am local time, which was about midnight from where we left.  Neither of us had slept much on the plan, despite our plans to do so.  We were hungry, so I guarded luggage and Joel went off to get some food!  He came back with a ham and cheese croissant (yum), a full English breakfast (probably would have been good but it was cold), and a chocolate bar. 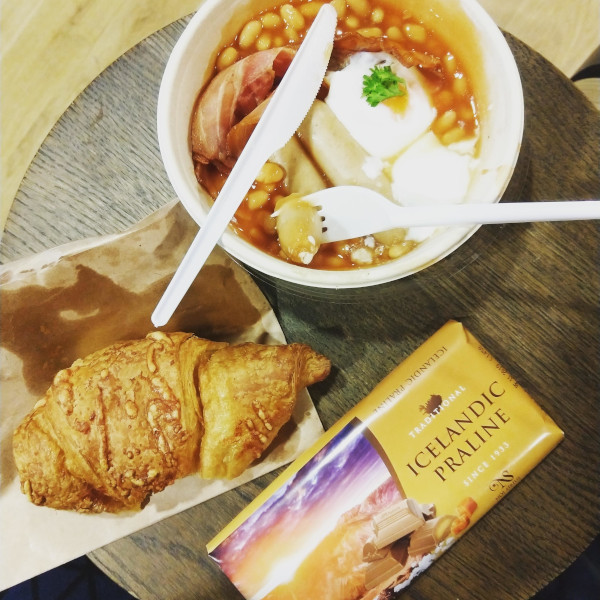 After eating we found a place to plug in electronics, and it just so happened to be in a space that had a perfect bench for napping.  For the next several hours we traded off napping and staying awake to keep an eye on things.  The airport was clean and well kept, with very modern architecture and decor.  I was most impressed by the bathrooms, they were small cubicles with complete privacy.  I half expected a shower in each one.  They were very clean and all white.  The sink also had the hand dryer built in which was weird yet efficient!

Someday I would actually like to experience Iceland, as a stop at the airport hardly counts.  But the short time we had there was pleasant enough!  Before we knew it it was time to board for our flight to Paris, so we made sure to fill our water bottles this time, and off we went!  I'll write about our Paris adventures tomorrow, so stay tuned!