No, I'm not talking about Art Garfunkel. I'm talking about all things artistic: movies, painting, songs, etc. Everyone likes art for different reasons. I posted a little about this when I talked about Star Wars and immersion in movies, back in December. It's ok to like whatever you like for whatever reason you like it! Seriously! 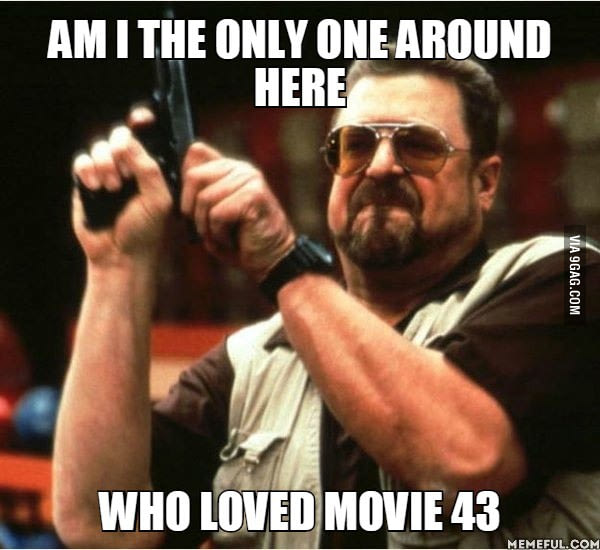 Now, sure, some things are more widely appreciated. And just because it's ok to like what you like doesn't mean you don't have 'bad taste'. But all that 'bad taste' means is that you have a different view on something.

Personally, I like Movie 43. Yeah, it's stupid. But I love how these epic actors are in these ridiculous stories! It just cracks me up! But it's ok if you disagree with me. Most people do. It has an 18 on Metacritic, after all! To me, it's just so meta! Hugh Jackman has testicles on his neck! HUGH JACKMAN! He's frikkin' Wolverine! It's just hilarious and awesome to me. 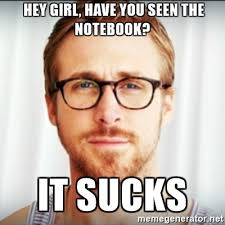 On the other side, there's The Notebook. Oh man, do I hate this movie. Not because it's a 'chick flick', cuz I like a lot of those. I would say that Notting Hill is one of my favorites, for instance. But The Notebook really irks me.

Yes, it's sweet that he loves her through everything. But every single female character in that movie is terrible. The men are awesome and amazing while the women are manipulative and terrible. They're fickle and weak and I just don't get the love of that movie. He wrote letters for a year and she didn't send one. Not a single one. It's the story of the unwavering love of a man for a woman, not for each other.

But just because I hate it doesn't mean everyone has to. I have my reasons for liking something and you have yours. Sometimes we'll agree and sometimes we won't and that's ok. I mean, if everyone liked the same thing, life sure would be boring, wouldn't it? So here are some things that I like or don't like that pretty much everyone disagrees with me. 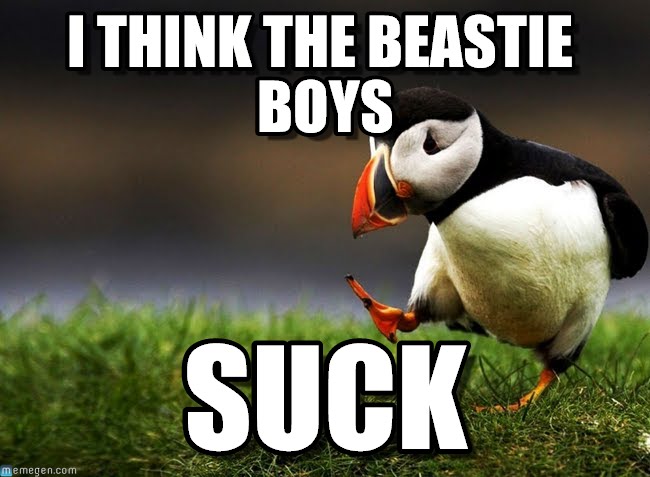 I can't stand The Beastie Boys. I know, pretty much everyone that likes decent music likes The Beastie Boys. I used to frequent the site TurnTable.fm (oh the good ol' days). Most of you probably never heard of that, but it was a site that people got up to DJ and people listened to what they played. It was grand.

But inevitably, someone would play Beastie Boys and I'd want to flip the table and ban everyone. Sure, I could just mute it (or downvote! /gasp!) But I've never understood why. They're just rappers. Why are they special? I don't really care for rap, much, but they'd never play any other rap. Just Beastie Boys. It was so weird. I'm listening to an alternative radio station. They play great tunes, like Pearl Jam or Radiohead or newer stuff like Judah and the Lion. And then... Frikkin' Beastie Boys, like it's rock! IT'S RAP PEOPLE! RAP! Ugh. Still, Fight For Your Right is tolerable. There was another one that I actually liked, too. I lost it when I lost my TurnTable queue. I miss you TT.FM! 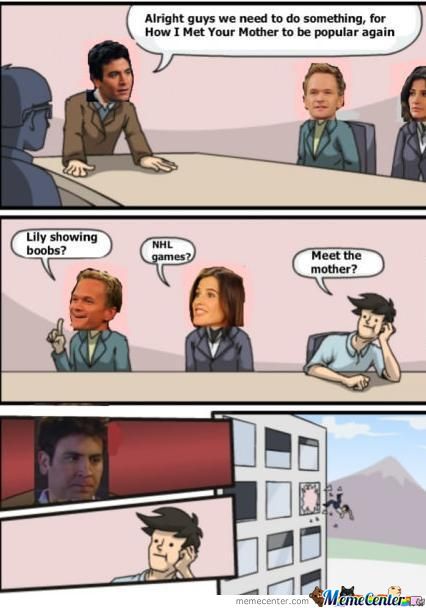 So something I liked that everyone else seemed to hate... the end of How I Met Your Mother. Now, I'll grant you that I didn't watch the whole thing. Ted was just too awful for me. I couldn't stand the way he cheated on cool ladies and kept just slobbering for the next girl. I couldn't do it.

I saw most of the last season, though, and the finale. And I was like, "Yeah! You've been wanting Robin the whole time! I getcha!" I kinda hope Bethany never reads this, cuz I might be killed in my sleep (although she liked it more on her second watching, she said).

Now, sure... it carried on way too long. It was very odd a father telling his kids such stories. I think it started well and probably should have ended after three seasons. Or maybe transitioned to something else with the same characters or something? I dunno... But the ending was fine by me.

So there you have it. I've spilled the beans. I'm different. And that's ok, cuz you're different, too. What do you like (or hate) that makes you different? Be warned, though... you can't say Jar Jar Binks. Everyone MUST HATE Jar Jar. EVERYONE!!